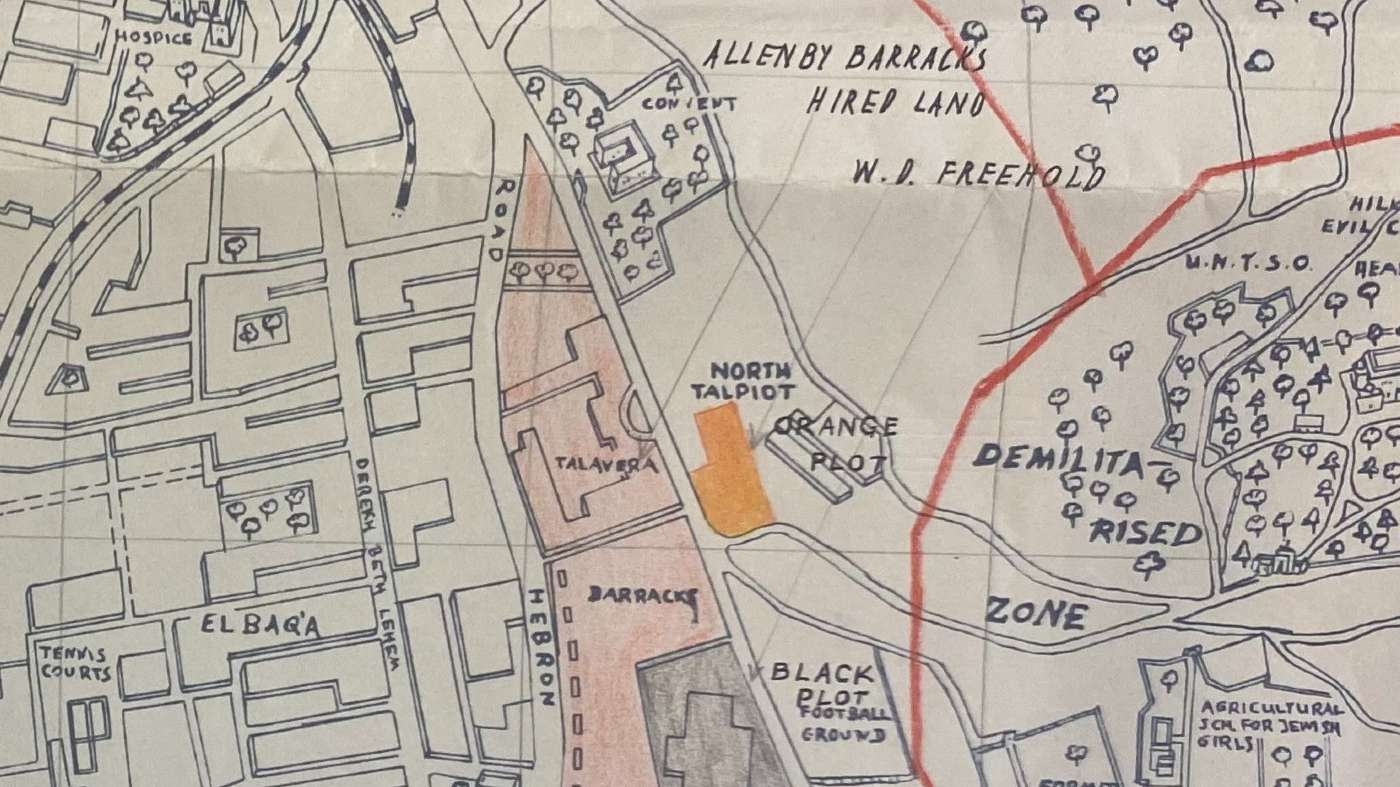 British officials considered it inevitable that Jerusalem would one day become Israel’s capital and identified land for use as a future embassy in the city from the 1950s, UK government records seen by Middle East Eye reveal.

Documents detailing negotiations between the UK and Israeli governments over the transfer of British-held assets dating from the Palestinian Mandate show how officials initially settled on an area within the former Allenby Barracks in southern Jerusalem as a possible embassy site.

That site - known as the Married Quarters - was eventually part of a land package sold to the Israeli government as part of a 1965 agreement. It was subsequently leased to the US government and is now the proposed location of a new US embassy compound.

But, as MEE exclusively revealed this week, the UK government instead retained and continues to hold adjacent land called the “Orange Plot”, which by then had emerged as officials’ preferred location for an embassy.

'If we sold property in Jerusalem to the Israelis, we should seem thereby to be condoning Israel’s defiance of the United Nations'

MEE’s discoveries - which come after British Prime Minister Liz Truss announced a controversial review of the location of the embassy in Israel - raise new questions about British policy on the status of Jerusalem over decades, and were greeted with dismay by many Palestinians.

“If this is true, this is again part of the Nakba in a sense, the continuation of the theft of Palestine and the giving away of Palestine,” former peace negotiator Hanan Ashrawi told MEE, referring to the mass expulsion of Palestinians from their homes during the establishment of Israel in 1948.

In line with international convention, the UK has long held that Jerusalem’s status should be decided following peace negotiations between the Israelis and the Palestinians, and that moving the embassy to the divided city from Tel Aviv would amount to its de facto recognition as Israel’s capital.

But records in the UK's National Archives, viewed by MEE, show that British officials were discussing the future need for an embassy in Jerusalem from the 1950s.

Writing in a 1959 memo, foreign office official CD Steel wrote: “I am strongly against the Allenby Barracks being sold to the Israelis because I am certain that when, as will inevitably happen, the capital moves from Tel Aviv to Jerusalem, we shall be hard put to it to find a site for our Embassy offices and residence.”

Steel notes the cautionary precedent of the sale of British military-held land in Khartoum following Sudanese independence in 1956.

He wrote: “In saying this, I have our experience in Khartoum in my mind, when, in spite of our efforts, the War Office disposed of the ‘Square Mile’ at a derisory price to the Sudan Government, and we had to pay £60,000 12 months ago for a tiny plot of land on which to build a new residence.”

Jerusalem, he noted, could only expand along roads or with great difficulty into surrounding hillsides: “Land, therefore, in or near the centre, as we should want to be, is expensive now, and will be at a premium when every Mission is scrabbling for land in, say, 7 or 8 years' time, when the move takes place.”

Steel’s memo followed almost a decade of protracted negotiations between British and Israeli officials over the Allenby Barracks and other British-held land on territory by then inside Israel.

Initially, British officials were wary that the sale of any land in Jerusalem to Israel risked further undermining the international status of the city established by the United Nations resolution partitioning Palestine in 1947.

Fighting in Jerusalem the following year ended with an armistice line - known as the Green Line - dividing the city into Israeli-controlled western areas and Jordanian-controlled eastern neighbourhoods, including the Old City.

In a 1950 white paper, foreign office official DN Brinson wrote: “The main consideration from our point of view is that, if we sold property in Jerusalem to the Israelis, we should seem thereby to be condoning Israel’s defiance of the United Nations,” he writes.

Brinson’s memo identifies the Married Quarters as a possible diplomatic base in the city, describing them as “quite attractive stone-built blocks of flats”.

“These buildings will be admirable as quarters for the Legation staff and possibly as offices,” he wrote.

By 1959, however, officials were debating the suitability of the Married Quarters site as the location for a possible embassy in Israel.

In a letter that March, Brigadier LP Molineux, the War Department's Director of Lands, wrote that he did not think the land was worth retaining, noting that it lay on the line between Israeli- and Jordanian-administered areas of the city and was “a considerable distance from the more likely area for embassy sites”.

Molineux concluded: “The area has developed into a rather poor district and we consider it would be entirely unsuitable for the use envisaged by the FO [foreign office].”

The documents reference concerns also raised by Francis Rundall, then British ambassador in Tel Aviv. Steel, the foreign office official, wrote: "I do not agree with the Ambassador that the site would not be suitable for our requirements when they arise."

Steel said he had "spoken to an architect in the Ministry of Works who knows Jerusalem". The architect, said Steel, had confirmed "the Allenby Barracks would not be unsuitable for an Embassy", as well as "the extreme difficulty there in getting any reasonable site".

By 1964 the focus of British negotiations with Israel had switched from the Married Quarters to the nearby Orange Plot as a potential future embassy site. Under the terms of the 1965 deal, the UK government agreed to lease the land to the Israeli government with the option to terminate the lease at any time, to use the site for “non-commercial purposes”.

According to Israeli land documents seen by MEE, the lease was last renewed in 2007.

MEE visited the plot on 17 October. The area is empty scrubland apart from a few trees, sitting between Hanoch Albek Street and Shmuel Lupo Street in Jerusalem’s southeastern Talpiot neighbourhood.

Speaking to MEE, Ashrawi said she was not surprised to learn the UK government had been quietly holding onto land in Jerusalem earmarked as the site of an embassy, describing the discovery as a “perpetuation of colonial injustice”.

“They [the British] gave away Palestine in the first place,” she said. “But I thought by now they would understand that the age of colonialism is over and they should unravel the settler-colonialist situation in Palestine rather than enhance it.”

Daoud Kuttab, a Palestinian journalist from Jerusalem, and now based in Amman, told MEE it was disturbing to learn the UK government had been making plans for an embassy in Jerusalem since the 1950s.

Kuttab said: "I think the British bear huge responsibility for the Palestinian plight as a result of the Balfour Declaration, and the support given to the Zionists by the British Mandate.”

Kuttab noted that the UK had opposed the move of the US embassy in Israel to Jerusalem by Donald Trump in 2018, voting in favour of a UN resolution condemning the move.

"The problem is that the UK is going against international law and its votes in the United Nations regarding the need not to take any steps that would prejudice the final outcome of negotiations."

Kuttab said the discovery could also damage relations between the UK and Jordan, which is the custodian of Jerusalem’s holy sites.

“This will undoubtedly cause a rift between Amman and London,” he said.

Selma Dabbagh, a British-Palestinian lawyer and writer and the chief operating officer at the International Centre of Justice for Palestinians (ICJP), told MEE the uncovering of the existence of the “Orange Plot” was indicative of “the levels of intrigue” that had shaped British policy towards the Palestinians over decades.

She criticised the current government’s review of the embassy location. On Wednesday, the ICJP wrote to Truss, warning that any attempt to move the British embassy from Tel Aviv to Jerusalem would be unlawful.

“This is not the time for the British government to completely drop the call for an end of the occupation. It is a time for an overhaul and re-examination of British policy in Palestine, one that is based on international law and the principle of equality under all laws.”

Lubna Musarwa in Jerusalem contributed reporting to this story. 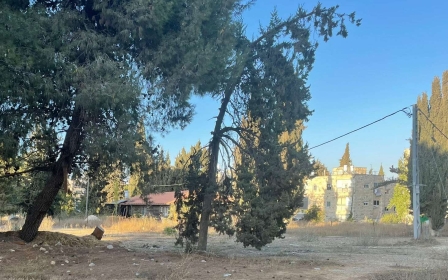 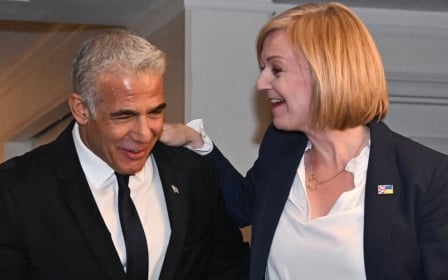 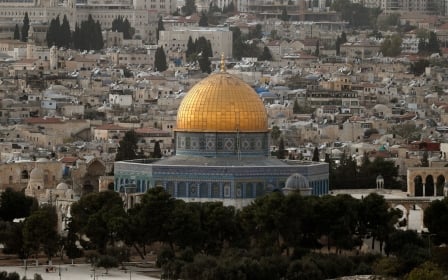