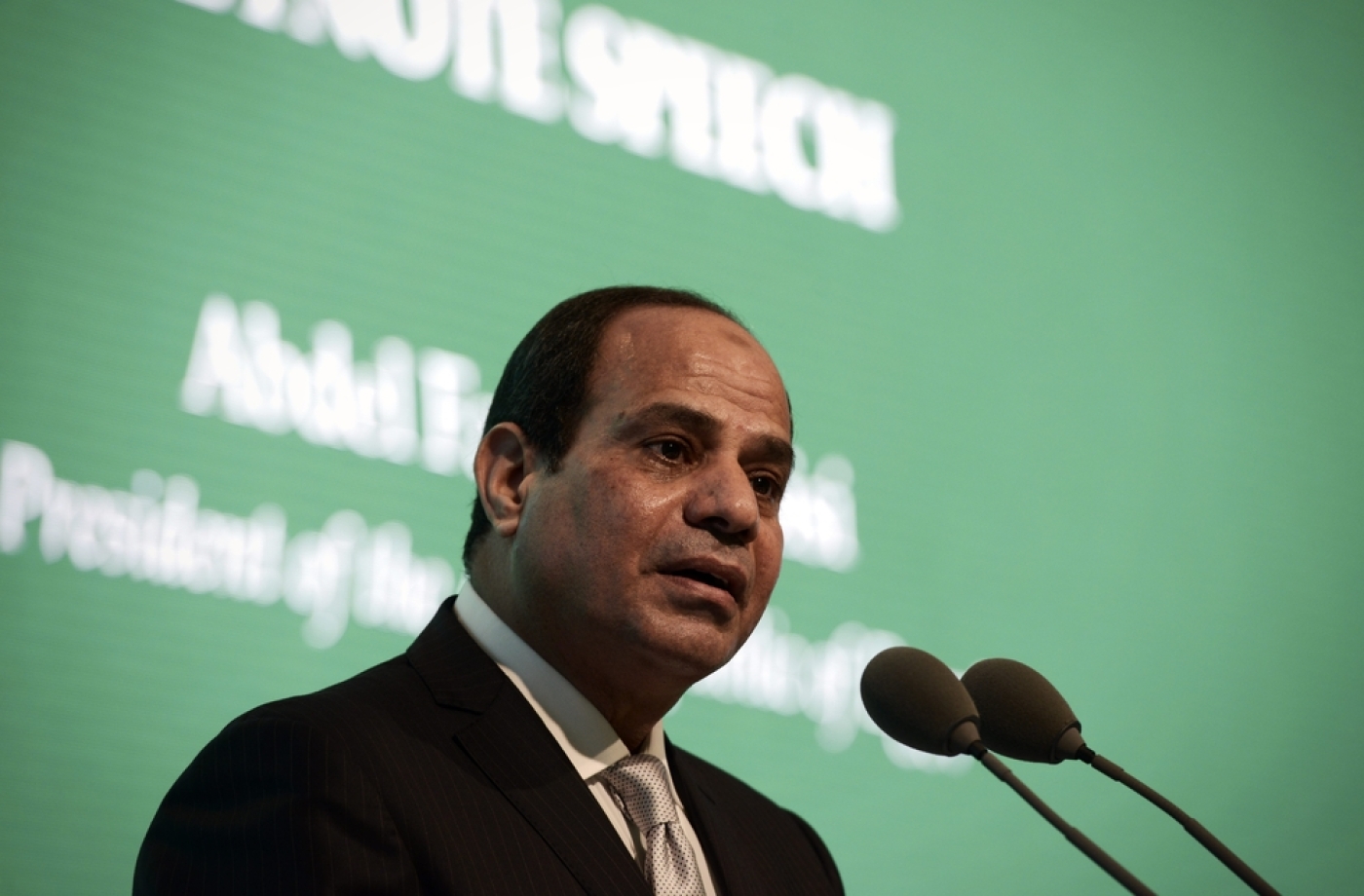 The anti-terror police have been asked to vet the entourage accompanying Egyptian President Abdel Fattah el-Sisi on his three-day visit to Britain starting on Wednesday for suspects already being investigated in Britain for war crimes.

Sisi, his prime minister and foreign minister have immunity from prosecution under international law, but he is known to travel with large delegations.

Lesser members of his government, and military officials who were involved in organising the massive repression faced by the opposition in Egypt since the military coup in 2013, face arrest and interrogation on allegations of torture, unless the Egyptian government has applied for and obtained special mission immunity from the Foreign Office. Lawyers representing the Freedom and Justice Party are set to mount immediate challenges in court to any immunity from prosecution given by the Foreign Office to members of Sisi's entourage.

Special mission immunity was given to Lieutenant General Mahmoud Hegazy, the chief of staff of the Egyptian Army, when he was invited by the Ministry of Defence on a four-day visit to Britain last month.

Hours before they were told by the FCO of Hegazy’s immunity, ITN Solicitors received an email from the police counter-terror unit S015 stating that they were considering “options for arrest and interrogation”. The email stated: “We will continue to consider any opportunities for arrest or interview in accordance with our Scoping Exercise as we have previously discussed.”

Tayab Ali, a partner at ITN Solicitors, who represents the Freedom and Justice Party and the deposed Egyptian president Mohamed Morsi, said: “We have a court order confirming that immunity is not a bar to the investigation of offences. The police have accordingly been investigating the alleged crimes and have begun to contact individuals and organisations to take further evidence.”

“When Mr Hegazy came, the only reason the police cited not to act on our request to arrest him was the Foreign Office's decision to grant him special mission immunity. Given the police’s commitment to arrest and investigate we take it on good faith that they would have wanted to interview him, had the Foreign Office not taken that decision."

The war crimes unit of S015 has since opened files on dozens of suspects and have begun collecting statements from victims and witnesses. Among them is a statement from a doctor who was present at a field hospital set up in Rabaa in Cairo from 28 June to the 14 August 2013, as well at the Mosque hospital.

He states: “It was a terrifying scene in the hospital. There was not an inch left on the seven floors which did not have an injured person on it. There was a queue for the operating room. We were operating on two people at a time in each of the four operating rooms. I had numerous people die in my hands. I cannot recall how many. There were people dying in the queues where they were. I had never seen anything like it. To make things more difficult the snipers began to target the people including medical staff in the Mosque hospital.”

“While I was in the hospital I was aware of the death of Asma Saker who is the daughter of Dr Hisham Sakar. Asma had brought her husband who was a protestor to the Mosque hospital for treatment as he had a bullet wound in his leg. While Asma sat at his bedside awaiting his treatment she was shot and killed from outside the hospital by a sniper. She was 25 years old, pregnant and the mother of two children.”

The potential witness states: “I am in fear for my safety and the safety of my family as a result of the things that I have seen and as a result of providing this statement. I would like my identity to remain hidden but I am willing to attend court to give evidence if this becomes necessary. In the event that this becomes necessary I would like to discuss with the Court or Prosecution how I can be protected.”

S015 have the names of 33 members of Sisi’s inner cabinet at the time of the massacres in Rabaa and elsewhere in Cairo in August 2013. But they have also began inquiries about other officials suspected of other crimes.

ITN have written to SO15 asking them to examine the names in Sisi’s as yet unknown and undeclared entourage. ITN have asked the police to establish whether individuals which the police are already investigating will be arriving in the UK as part of Sisi’s visit; if so, will they be seeking their arrest; and whether the Egyptian authorities have made a formal request for special mission status. If the police reply that they have identified suspects on Sisi's entourage  and that they have been given special mission status, that status will be challenged in court, in proceedings which could start on Wednesday.

In the letter, ITN cites voluminous evidence from Human Rights Watch and Amnesty International of torture and mistreatment of prisoners in Egypt since 2013.

This is one of the grounds under which the immunity of prosecution given to Hegazy will be challenged in legal proceedings, which will be undertaken by Lord Macdonald, himself a former DPP.

He will argue that there is no domestic legislation which acts as a basis for the special mission status awarded to Hegazy. Further, this is a case where domestic legislation trumps international legal practise. Section 134 of the Criminal Justice Act of 1998 empowers the British courts to try anyone, anywhere , who is suspected of committing torture.

Ministers have a duty to comply with domestic legislation, so the political decision to award immunity from prosecution to a member of the Egyptian authorities who had command and control at the time of the massacres in August 2013 and from then on, would breach UK law, the legal team will argue.

As DPP, Lord Macdonald was responsible for drawing up the National Protocol on War Crimes and Crimes Against Humanity. These govern how the counter-terrorism command division of the Metropolitan Police investigates serious international crimes and how the counter terrorism division of the CPS decides whether there will be a realistic prospect of conviction. This protocol has been amended since, but is still essentially in force.

Lord Macdonald told MEE in an interview published earlier this year: “We are drawing the attention of the UK authorities to the law, to the existence of these crimes and to the evidence that many individuals have been complicit in these crimes and we are calling on the British authorities to enforce UK law. I don’t want to say more than that.”

In May last year, the Egyptian Minister for Industry and Trade, Mounir Fakhry Abdel Nour cancelled a visit to Britain at the last moment, as part of a high level delegation reportedly for fear that he might be arrested. His name was registered on a hotel booking in Knightsbridge.