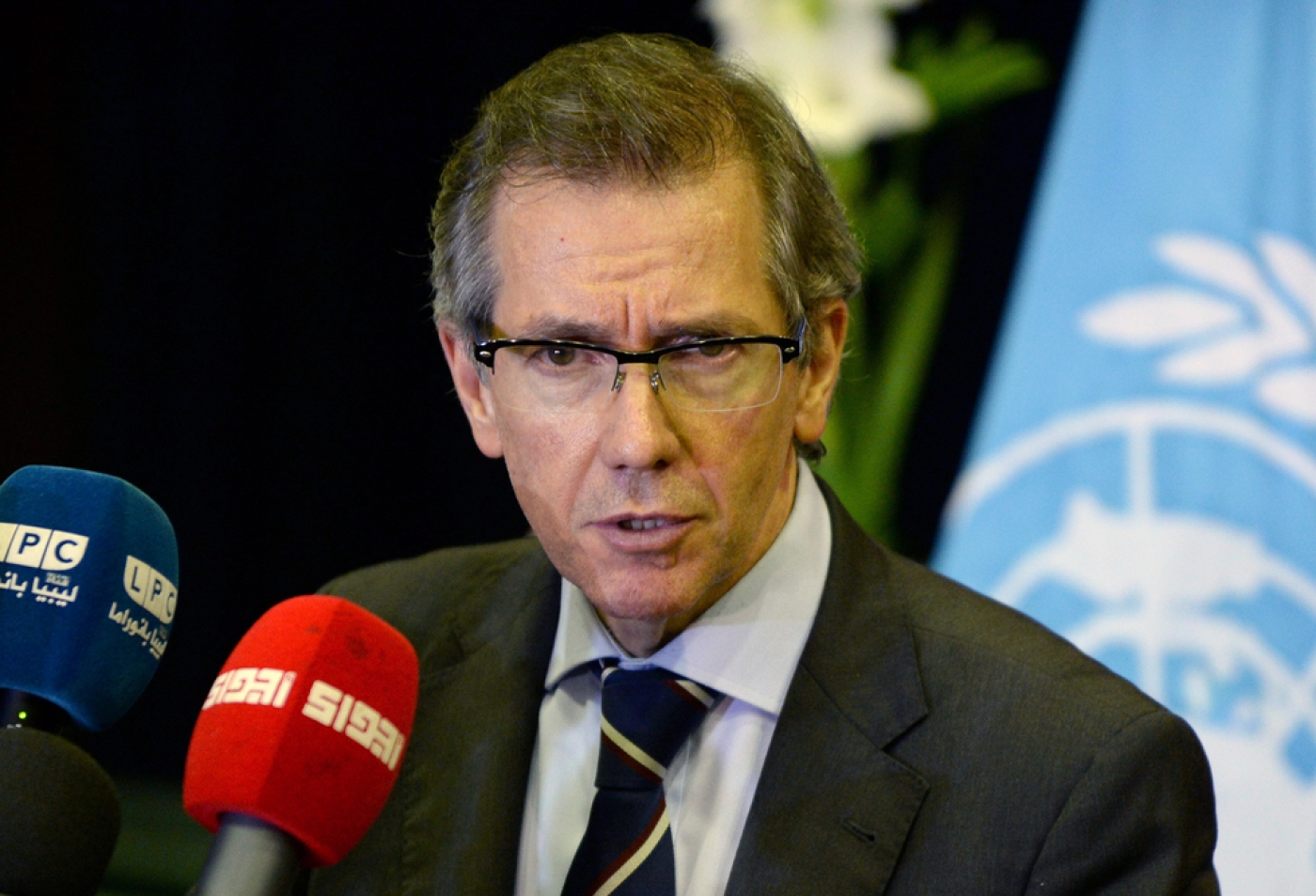 The former UN peace envoy to Libya reportedly asked permission from the United Arab Emirates to put forward a candidate to head the Libyan unity government, according to leaked emails.

The Guardian disclosed emails on Sunday which they said appeared to show Bernardino Leon asking permission to “proceed with a plan to name the Libyan ambassador to the UAE as a possible prime minister of the unity government [in Libya]”.

Middle East Eye understands that these emails were written in April 2015 and included Leon seeking to know whether UAE Foreign Minister Abdullah bin Zayed al-Nahyan would be happy for him to put forward Aref Ali Nayed as a candidate to head the Libyan unity government.

Aref Ali Nayed, 53, was appointed as Libya’s ambassador to the UAE in August 2011, after having been part of the Libyan National Transition Council (NTC), which was established in the midst of the 2011 revolution to overthrow long-time leader Muammar Gaddafi.

Before becoming a diplomat, Nayed was a successful businessman in Libya, and a prominent Islamic scholar in the field of interfaith relations. In his time as ambassador Nayed has become known for his opposition to the Muslim Brotherhood, who he has said “do not represent the Libyan people”.

Nayed told the BBC in September 2015 that he wanted to be prime minister of a unity government for Libya. He said he wanted the job because “it is a duty that I feel I have to do, that I feel bound to”.

However, Nayed was not chosen as a potential premier when a unity government was proposed in December 2015 and he remains the Libyan ambassador to the UAE.

The Guardian also reported it was in possession of emails from Leon that showed the UN working with the UAE's national security council "on how the Libyan armed forces could be run".

Since the overthrow of Gaddafi in 2011, Libya has been wracked by civil war, as various armed militias vie for control of Africa’s largest oil and gas reserves.

The country has been divided between two parliaments, one based in the east and supported by the forces of former Gaddafi army general Khalifa Haftar, and another situated in the capital Tripoli which is dominated by Islamists and backed by the Misratan-led alliance of militias known as Libya Dawn.

The UN has led mediation seeking to end the political impasse and bring an end to fighting by forming a unity government. It is an initiative which has become an increasing priority for the international community because of the Islamic State gaining a foothold in Libya amid the political vacuum.

However, the UN’s neutral stance has been called into question, after a scandal emerged in November 2015 which exposed envoy Leon as having secretly worked with the UAE to support one side in the Libyan civil war.

An email seen by Middle East Eye showed Leon writing to the UAE foreign minister to seek ways to promote the House of Representatives (HoR) government, which is based in the eastern town of Tobruk.

The UAE has backed the HoR and their military allies with funding, political support, and, allegedly, air strikes against their opponents in Tripoli.

Leon’s role as a mediator has been further called into question after he left the UN in December 2015 to take up a lucrative job as director of the Emirates Diplomatic Academy.

Leon has rejected claims of bias during his time as Libya peace envoy, and said that his emails have been selectively read. However, unnamed senior UN officials told the Guardian that they have come under “extraordinary pressure” from Arab Gulf states on Libya.

The UAE’s political involvement in Libya has been further emphasised by their locking up of five Libyan businessmen accused of involvement in terrorism related to their home country. The Libyan detainees deny the charges and the UN has condemned the detention and called for their release.

While the UAE’s role in Libya has been somewhat exposed by the publication of Leon’s emails, other regional powers have likely sought to influence the Libyan civil war.

Qatar and Turkey have been credited with supporting the Tripoli-based legislature, while Libya’s North African neighbours Egypt, Tunisia, and Algeria have all spoken publicly about their concerns over Libyan lawlessness.

Despite the controversy surrounding Leon, the UN process has continued in Libya under new envoy Martin Kobler, who is a veteran German diplomat. A council comprised of elements from rival political factions was established in late 2015 which has proposed a 13-ministry unity government.

The unity government must be approved by the HoR but under the UN plan it does not need to be formally endorsed by the Tripoli-based General National Congress (GNC) parliament.

The HoR was reported to be planning a vote on Tuesday to approve the unity government, however, the meeting was thrown into doubt after prime minister designate Fayez Sarraj asked for more time to present the new administration in Tobruk.