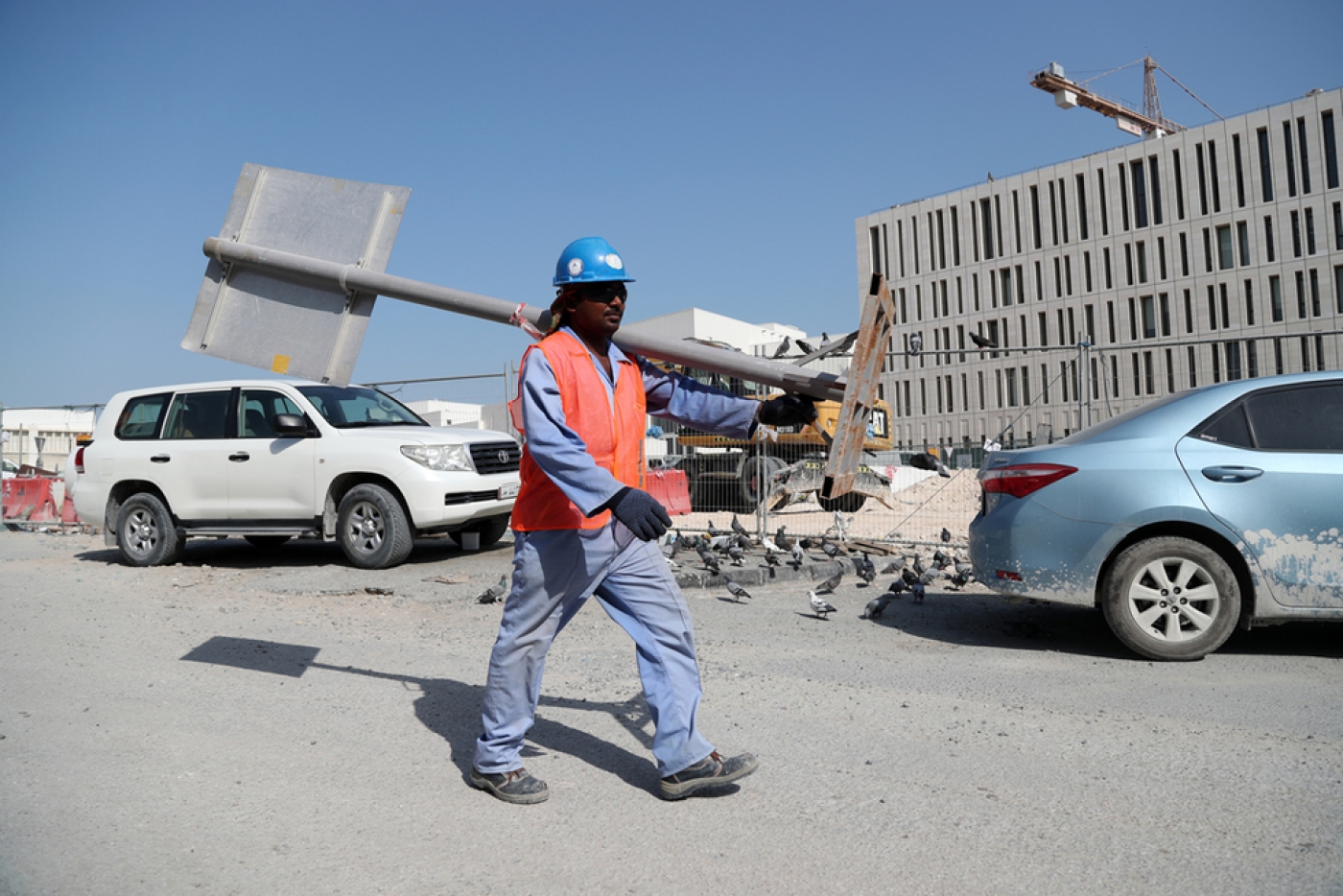 According to ILO, about two million foreign workers live in Qatar (AFP)
By
MEE and agencies

The International Organisation for Labour (ILO) on Wednesday dropped a case against Qatar over its treatment of foreign workers that had overshadowed the wealthy Gulf state's preparations to host the 2022 World Cup.

The move by the United Nations agency came after Qatar committed to far-reaching reforms, including allowing workers freedom to leave the country and change jobs without their employer's permission and establishing a minimum wage without discrimination and a fund to guarantee late wages.

“The ILO welcomes the commitment of Qatar to engage in substantive cooperation with the Organization for the promotion and protection of workers’ rights,” said Guy Ryder, ILO's director general.

Human rights groups, long critical of Qatar's treatment of its mostly Asian foreign workers, welcomed the agreement but said Doha must now follow up its pledges with firm action.

The ILO decision spares Qatar a commission of inquiry that would have badly tarnished the image of the gas-rich kingdom, which hopes to use the tournament to showcase its progress and development, including showcasing the World Cup in 2022.

Qatar is also seeking to counter criticism from its Arab rivals, who have branded it a global financier of militant groups, a charge Doha denies.

"Qatar will remain mindful (about) guaranteeing all rights of workers," he said, adding that Doha is committed to a three-year programme of technical cooperation with the ILO.

The ILO said in a statement the technical cooperation will "support the implementation of numerous measures adopted by the Government of Qatar... to address passport confiscation, contract substitution, as well as restrictions on the ability of migrant workers to change employers and exit the country".

The complaint against Qatar "originated out of a deep concern about exploitation exposing almost two million workers to forced labour," Catelene Passchier, spokeswoman for the workers' group at the ILO governing board, said.

"While we welcome and support this agreement between the ILO and Qatar, we emphasise that nice words and good intentions are not sufficient. Implementation of these intentions in law and practice is critical," she said.

“If Qatar wants to show it is serious about its promises of reform, it should urgently confirm the unambiguous cancellation of the exit permit so that all migrant workers will be able to return home without needing their employers’ permission,” said Fabien Goa, Gulf migrants specialist at Amnesty International.

But Qatar also drew praise for its reform plans.

“Qatar has set a new standard for the Gulf States (that) must be followed by Saudi Arabia and the UAE, where millions of migrant workers are trapped in modern slavery,” said Sharan Burrow, general secretary of the International Trade Union Confederation and once one of the country’s sharpest critics.