Outrage at the ease with which supporters of President Donald Trump were able to storm the US Capitol building on Wednesday continues to mount, particularly in light of the force used against recent Black Lives Matter protests in Washington.

From federal to local officials, activists and everyday citizens, criticism has been directed at law enforcement over how one of the most fortified buildings in the country was so quickly overcome with so little pushback against the insurrection.

Staffers barricaded doors with heavy wooden furniture while lawmakers, aides and journalists were rushed out of the Senate and House floors, cutting short proceedings as a crowd of angry Trump supporters tore through the Capitol, breaking windows, destroying offices and wreaking havoc in the 228-year-old federal building.

The Capitol was breached at about 2pm local time, as the 2,000-strong United States Capitol Police (USCP) force failed to keep back the mob. Meanwhile, the DC Metropolitan Police Department (DCPD), which must be invited to assist on federal land, was not called in until 6pm, according to newly appointed DC Police Chief Robert Contee. The DCPD is a force of 4,000 officers. While current USCP Chief Steven Sund said in a statement that forces "responded valiantly when faced with thousands of individuals", officials have painted a different picture.

Speaker of the House Nancy Pelosi went as far as to ask for Sund's resignation, adding that the House Sergeant at Arms, the chief law enforcement officer for the House of Representatives, had already submitted his notice.

During a news conference on Thursday, Washington DC Mayor Muriel Bowser referred to the incident as a "catastrophic security failure" and called on Congress to open a non-partisan commission to investigate what happened, "both to hold people accountable and to ensure that it never happens again", she said.

The mayor also called on Congress to transfer authority over the DC National Guard from the US president to the DC mayor's office, pointing out that district officials were powerless to order in more forces amid the White House's failure to do so.

Later on Wednesday, it was revealed that Vice President Mike Pence - not Trump - was the one to eventually order the National Guard to be deployed, despite the authority being formally held by the president.

'If the protesters were Black'

The failure of law enforcement to secure the Capitol is being compared with the vigorous security response imposed during the Black Lives Matter protests.

"We must also understand why the federal law enforcement was much stronger at the protests over the summer than during yesterday's attack on Congress," the mayor said.

US President-elect Joe Biden, whose electoral win was being certified during the Capitol attack on Wednesday, also called out the differences between police treatment of BLM protesters and the pro-Trump mob.

"No one can tell me that if it had been a group of Black Lives Matter protesters yesterday that they wouldn't have been treated very, very differently than the mob of thugs that stormed the Capitol yesterday," Biden said during a speech to the nation on Thursday.

During the BLM protests that erupted after the police killing of George Floyd in May, Trump fortified DC office buildings and memorials, and called in thousands of officers, from local and state police departments to National Guard soldiers and even federal prison guards.

Roughly 1,600 active duty troops were also brought to military bases in the region as a precaution.

Trump threatened to "dominate" protesters, saying "the most vicious dogs, and most ominous weapons, I have ever seen" were ready to be deployed against them.

Meanwhile, on Wednesday, videos circulated of police officers opening the gates to the Capitol grounds and taking selfies with members of the mob that had broken through.

This was the response to a peaceful BLM protest just a few months ago in DC. Clearly there was a level of collusion or unfathomable incompetence today between the US Capitol Police and these right wing Trump supporting terrorists. #Sedition pic.twitter.com/6YmH861L7x

The official BLM movement called the lack of security for Wednesday's pro-Trump event - lauded by the president for weeks - "one more example of the hypocrisy in our country's law enforcement".

"When Black people protest for our lives, we are met by National Guard troops or police equipped with assault rifles, tear gas and battle helmets," the group said in a post to Twitter.

"When white people attempt a coup, they are met by an underwhelming number of law enforcement personnel who act powerless to intervene." 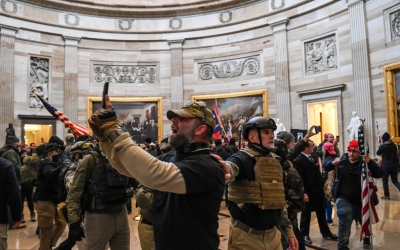 "Make no mistake, if the protesters were Black, we would have been tear gassed, battered, and perhaps shot."

House Representative Karen Bass, a Black woman who has served California's 37th congressional district for two decades, called for a full investigation into the incident.

"You can't even come into the Capitol with a purse without it being screened. How can you break into the Capitol and walk around with flag poles? And you see the Capitol police right there. They were completely overwhelmed. Why did that happen? Why didn't they erect barriers around the Capitol that are present now, the fences? I think a lot of this needs to be investigated," Bass said during a live interview with CNN on Thursday.

"Obviously, Black Lives Matters protesters were perceived as very threatening. And for some reason these weren’t,” she continued. “It is so demoralising for people, in particular, African Americans and other people of colour, who know… if tens of thousands of young, old African Americans attacked the Capitol like that, what would have happened."

"We are sick and tired of seeing the same type of double standard," she said.

My team and I are safe. I am in disbelief. I can’t believe domestic terrorists are roaming around inside the Capitol.

I’m remembering being brutalized and treated like a domestic terrorist just for protesting to keep my people alive.

During Wednesday's attack, newly elected Representative Cori Bush, who marched on the streets in Ferguson, Missouri, as an activist before running for Congress, tweeted her "disbelief" over the ability of the Trump-supporting mob to breach the Capitol.

"My team and I are safe. I am in disbelief. I can't believe domestic terrorists are roaming around inside the Capitol," Bush wrote.

"I'm remembering being brutalized and treated like a domestic terrorist just for protesting to keep my people alive." 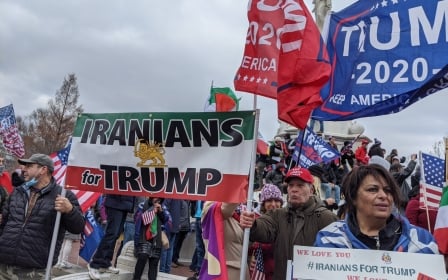