US democracy will pay 'heavy price' for not supporting democracy in Tunisia, says ex-president 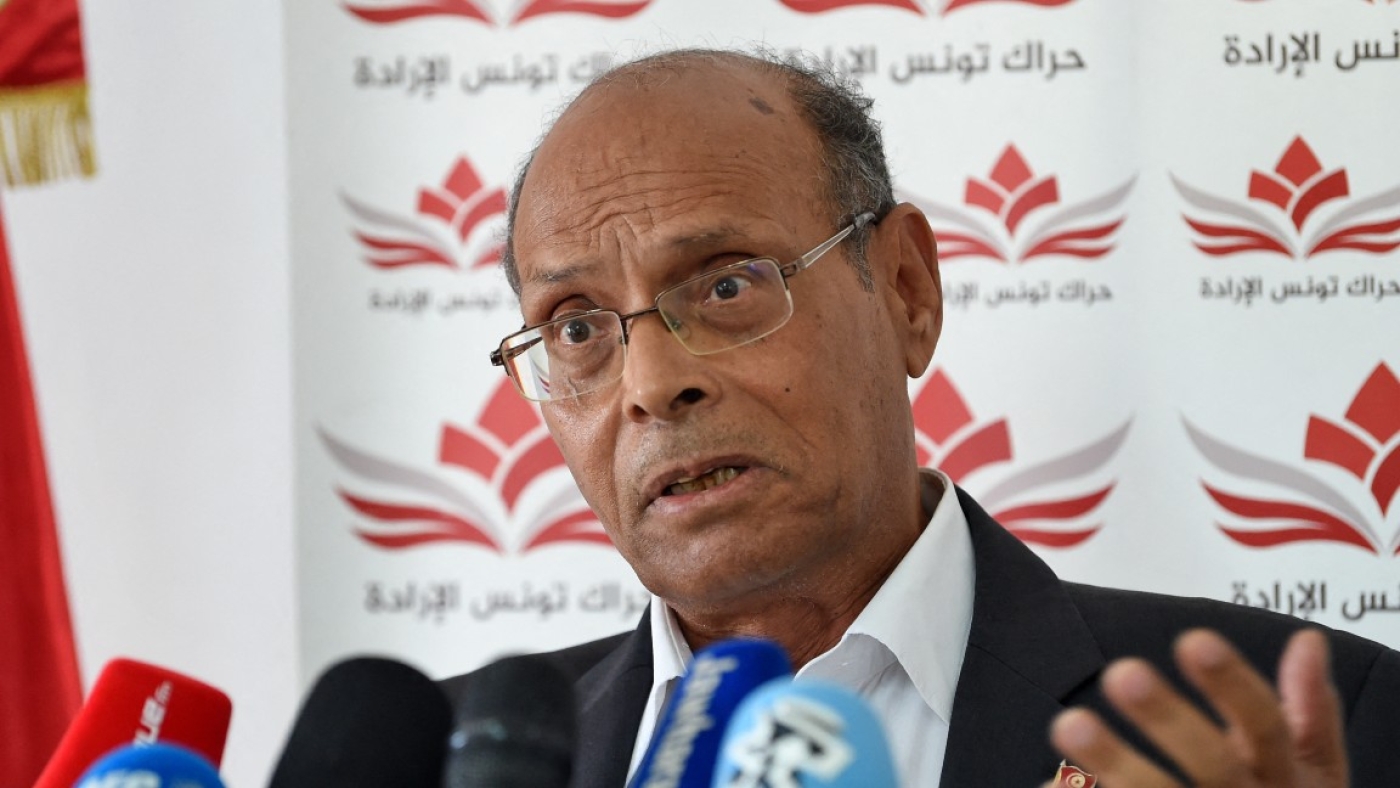 The lack of US support for democracy in Tunisia since President Kais Saied seized power last year has left democracy proponents in the country with few options. And former Tunisian President Moncef Marzouki said that American democracy will suffer as a result of Washington's continued support for autocratic governments in the Middle East.

In a sit-down interview with Middle East Eye, Marzouki said the US and Europe's inaction towards democratic backsliding in Tunisia have helped make it even more difficult for the country to return to democracy.

"For the western countries, it's business as usual with dictatorship. And this is very, very sad and also very counterproductive because I will say that western democracies will pay a heavy price not to support our democracy."

The former president argued that there is a link between the anti-democratic counter-revolutions in the Middle East after the Arab Spring - which led to a huge flow of refugees mostly fleeing civil war in Syria - and the resurgence of far-right politics in Europe, whose main causes are opposition to globalisation, immigration, and multiculturalism.

"By not supporting our democracy, in fact, they are threatening their own democracy," he said.

Marzouki, who was president of Tunisia from 2011-2014, was a lifelong human rights activist and was elected president after the revolution that sparked the wider Arab Spring in the region. He recently joined the Harvard Kennedy School's Ash Center as a senior fellow and spoke with MEE from the lobby of a hotel in downtown Washington after a long day of meetings and speeches. 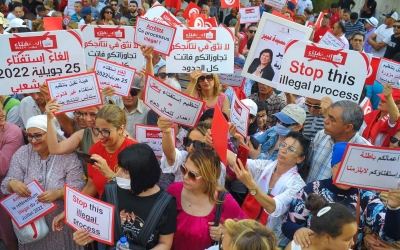 As Tunisia's Saied consolidates power, US remains without clear roadmap ahead
Read More »

Marzouki is at the forefront of a campaign to put pressure on Saied, after Saied froze parliament in Tunisia last year and made a number of moves to consolidate one-man rule in the country, most recently by altering the country's constitution in a July referendum.

There were multiple moments when Marzouki and other advocates for democracy in Tunisia hoped the US would intervene to place pressure on Saied's government. As soon as he froze parliament, Washington had the option to label the move a coup, but did not.

Then, in the run-up to the constitutional referendum earlier this year, experts told MEE that the US could build a roadmap for its approach to Tunisia, and create steps it would take to pressure the country into getting back to a democratic system.

There were also deliberations over the International Monetary Fund (IMF) loan to Tunisia, which experts said the US could use as leverage against Saied to pressure him into making certain concessions like restoring parliament and making the judiciary independent again.

However, a preliminary agreement for the loan was reached last month with no such parameters. And in December, Saied was invited to the US to attend a summit of African leaders.

"Look at this dictator and the other dictator of Egypt, [Abdel Fattah el-Sisi], both are invited to the Africa-America summit in December. So on one hand, they are having a summit on democracy. And then they'll meet with a dictator. So there is a contradiction," Marzouki said.

Saied has ruled by decree since last summer when he brushed aside parliament and the democratic 2014 constitution, in a step his foes called a constitutional coup, moving towards "one-man rule" and vowing to remake the political system. The move was reported months earlier by MEE, which had obtained leaked documents of his plan.

He went on to create a new constitution, which was passed with a vote that only garnered a 30 percent turnout, which introduced a presidential system of government - a departure from the mixed presidential-parliamentary system enshrined in the previous one.

Under this new system, Saied is allowed to present draft laws, have sole responsibility for proposing treaties and drafting state budgets, appoint or remove government ministers and appoint judges.

His government has also imprisoned Saied's opponents, including two MPs who were jailed by a military tribunal.

Sources told MEE last year that the outgoing prime minister, Hichem Mechichi, was physically assaulted in the presidential palace before he agreed to resign from his post. Mechichi, however, denied he was subject to violence.

And in December 2021, a Tunisian court sentenced Marzkouki in absentia to four years in prison.

Throughout the past year, as Saied has continued to consolidate power, the United Arab Emirates and Saudi Arabia have both been accused of supporting the Tunisian president in an attempt to establish a government friendly to their own ambitions.

Rached Ghannouchi, head of Tunisia's biggest parliamentary party, Ennahda, has accused the UAE of being behind the "constitutional coup", an allegation the UAE has denied.

The allegation has also been met with outrage in the US, with Senator Chris Murphy having called on the Biden administration to look into whether Riyadh or Abu Dhabi played a role in assisting Saied's efforts.

Marzouki also said that Saudi Arabia and the UAE played a role in supporting Saied's power grab, saying that "they poured a lot of money" into supporting the current Tunisian president.

"Unfortunately, everything has been done by the dictators to sabotage the Tunisian process and democracy," Marzouki said.

During an address that he gave at the National Press Club in Washington on Tuesday morning, Marzouki said one of the main reasons why democracy has failed in the Arab world as a whole is "because of many of the interventions of these dictatorships".

"So talking about the fact that all of the Arab Spring has failed because they weren't ready for democracy is bull****," Marzouki told a crowd at the National Press Club in Washington on Tuesday.

Propping up Saudi Arabia and UAE

Washington's reaction to Saied's moves has largely been reactive rather than planned or strategic, making it easier for Saied to continue to dismantle the progress made in the nation's nascent democracy.

Congress has managed to fill in some gaps, as several lawmakers have served as the American vanguard, calling for concrete action against the Tunisian leader and his government.

Several senators and members of Congress have issued statements rebuking Saied, saying that he is uprooting the hard-fought gains of the Tunisian people.

Biden has made it a point to recentre democracy in the administration's foreign policy, warning in September that the issue was "a battle for the soul of this nation".

Yet in the case of the Middle East, Marzouki says the Biden administration was moving in the opposite direction of democracy. 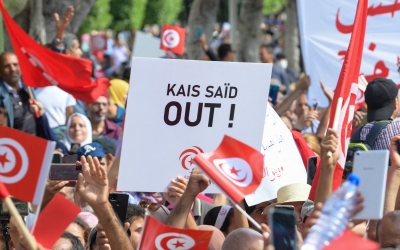 "Normally, the United States would put pressure on the client countries like the Emiratis and the Saudis, to tell them to stop fighting the wave of democratisation and do some reform in their own country," he said.

"But this is not what they are doing. They are just supporting those dictatorships. And what for me is completely unbelievable is the fact that these dictatorships of the Saudis and Egyptians and Emiratis are promoting what I call the Chinese model or the Russian model of governance."

US-Saudi relations went through a tense moment in October when Washington accused Riyadh of siding with Russia after the Saudi-led Opec+ agreed to an oil production cut, a move that Saudi Arabia said was not politically motivated.

However, last week the Biden administration then moved to file a court brief saying that Saudi Crown Prince Mohammed bin Salman was immune from a lawsuit filed against him over the killing of Jamal Khashoggi.

The US has warned countries in the Middle East against cooperating too closely with China, saying it could have serious security concerns for Washington. Still, many of the US's partners and allies in the region, including Israel, have substantial relations with both China and Russia, two of America's biggest adversaries.

"Look at the good relationship that the Emiratis have with the Russians. It's really because the Emiratis feel they are closer to Russia than to the United States," Marzouki said.

"I can't understand. I would say that it's a stupid way of doing politics." 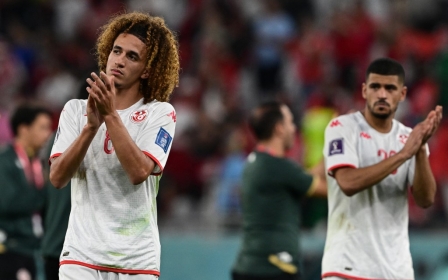 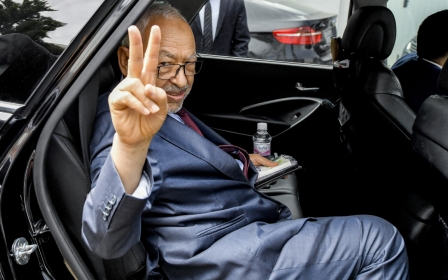 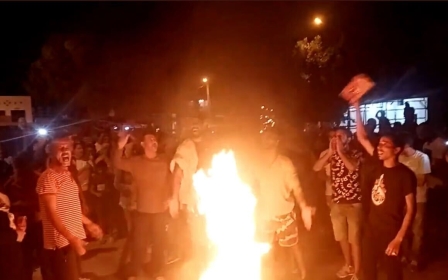 Inside Tunisia
Tunisians protest against high prices and food shortage