A riot police stands guard outside the Justice Palace, the Caglayan courthouse, in Istanbul (Reuters)
By
Reuters

US authorities have denied visas to a delegation from Turkey's Justice Ministry, CNN Turk reported on Tuesday, preventing them from travelling to the United States to resolve the visa crisis between the two countries.

The delegation was due to travel to Washington later this month, CNN Turk said. The move is likely to fan further discord between the NATO allies, who have cut back issuing visas to each other's citizens.

Washington this month stopped issuing visas at its missions in Turkey citing safety concerns for its staff following the arrest of two U.S. consular staff, both Turkish nationals.

In May, a translator at the consulate in the southern province of Adana was arrested and, more recently, a Drug Enforcement Administration (DEA) worker was detained in Istanbul. Both are accused of links to last year' failed coup. The US embassy has said the accusations are baseless.

Turkish police want to question a third worker based in Istanbul. His wife and daughter were detained over alleged links to the network of US-based cleric Fethullah Gulen, blamed by Ankara for orchestrating the abortive putsch. They were later released.

Turkey has been angered by what it sees as US reluctance to hand over the cleric Gulen, who has lived in Pennsylvania since 1999. US officials have said its courts require sufficient evidence to order his extradition

Gulen denies any involvement in the failed coup.

Turkey has also been enraged by Washington's support for the Syrian Kurdish YPG militia in the fight against Islamic State. Turkey regards the YPG as an extension of the outlawed Kurdistan Workers Party (PKK). 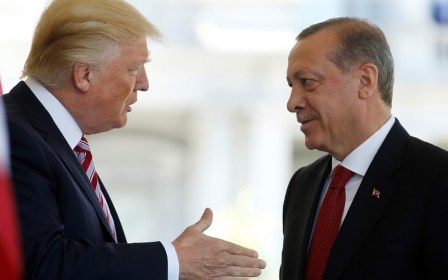