US elections 2020: The legal peril Donald Trump faces if he loses the election

His status as president has protected him so far, but Trump could be slammed with a pile of personal lawsuits should he fail to secure re-election Donald Trump is fighting to hold on to the White House. If he loses, an outcome that is growing increasingly likely, the protections afforded to him by the presidency will vanish.

His status as president has protected him so far, but Trump could be slammed with a pile of personal lawsuits should he fail to secure re-election.

The businessman and reality TV star is likely to face a litany of potential criminal suits, ranging from emoluments to rape charges, if Joe Biden secures enough electoral college votes on Tuesday.

Trump's biographer David Johnston has even warned that the incumbent could face jail time once he leaves the Oval Office.

"Absolutely yes, if we are a nation of equal justice and Trump is convicted of serious felonies," he told the Washington Monthly.

"Whether it happens is entirely unpredictable."

Some in Washington have suggested a formal structure for investigating Trump once he becomes a private citizen again.

Congressman Eric Swalwell from California raised the idea in August of a "Presidential Crimes Commission," made up of independent prosecutors who can examine "those who enabled a corrupt president".

Ahead of the US presidential election, Middle East Eye takes a look at some of the many lawsuits Trump is currently dealing with.

The most serious case Trump is facing is the Manhattan district attorney's probe into the financial workings of the Trump Organisation.

Prosecutors in the case have said in court filings that Trump could be guilty of a number of crimes, including tax, bank and insurance fraud, as well as falsifying business records.

The New York attorneys on the case have filed a subpoena for eight years of Trump's taxes, which the president tried blocking multiple times.

In July, Trump lost an appeal that ruled he is not liable to a subpoena from a state grand jury.

Tribe said that "no presidential pardon could operate to shield Trump or anyone else from such state prosecutions".

Within the Mueller report, the result of a two-year investigation into Russian interference in the US election that dominated headlines when it was fully revealed, Special Counsel Robert Mueller found a number of cases where Trump obstructed justice.

One of these cases was when he had suggested to FBI director James Comey to drop an investigation of his former national security adviser, Michael Flynn. Then, Trump fired Comey.

While Mueller stopped short of recommending criminal charges, saying that a sitting president cannot be indicted, the president may not have protection if he is out of office.

Mueller also did not clear Trump of the obstruction charges.

Whether a Biden administration would pursue charges against the president would most likely depend on who is chosen as Attorney General, Tribe noted.

Cohen, during testimony to the US Senate, said that Trump had directed him to make hush payments to adult-film actress Stormy Daniels, who claimed to have a sexual affair with the president.

Similar to the obstruction of justice case, without the office of the presidency to protect him, Trump could face charges for this. And a possible Biden administration is not likely to pardon him.

"I doubt that a Biden administration would pardon any of those crimes because the former Vice President has made clear that he would return to the practice of following normal pardon protocols and procedures," Tribe said.

"And it's exceedingly unlikely that the normal conditions for showing mercy and accordingly issuing a presidential pardon have been met with respect to a virtual crime spree on the part of Donald J. Trump."

Trump faces lawsuits alleging he has violated the emoluments clause of the Constitution by accepting payments from foreign and domestic officials who stay at the president's hotels.

The Foreign Emoluments Clause of the Constitution prohibits the president from accepting any benefits from foreign states unless he first obtains the consent of Congress.

Trump has received many gifts from foreign leaders, including from Saudi Arabia where he received around 80 items, including a dagger made of pure silver with a mother of pearl sheath. 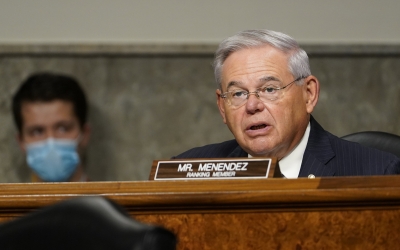 Trump has also been under scrutiny for accepting money that representatives from Riyadh spent by staying at the president's hotels.

Examples of this include the Saudi government paying $270,000 at the Trump International Hotel in Washington from November 2016 to February 2017; the Kuwaiti embassy holding a celebration at the Trump hotel costing upwards of $60,000; and the Malaysian prime minister and his delegation all staying at the same hotel in September 2017.

"The gifts and other financial benefits President Trump has received from various foreign powers including Saudi Arabia almost certainly violated the Foreign Emoluments Clause of Article I of the U.S. Constitution," Tribe told Middle East Eye.

"Such orders could not be issued after Trump leaves office, however, because his departure would automatically end the violations and render judicial relief moot."

While Trump would not be tried for any part in the murder, there is a chance that he could be called upon to testify as a witness. In an interview with American journalist Bob Woodward, Trump said he "saved his a**", referring to the crown prince and the journalist's murder.

"President Trump can certainly be issued a subpoena to appear and testify as a witness," George Bisharat, a professor at UC Hastings College of the Law in San Francisco, told MEE.

"But he is entitled to move to quash any such summons, including on the grounds that his testimony would include no facts material to the prosecution."

If the plaintiff in the case can argue that MBS made admissions to Trump regarding details of the murder, such as the dispatch of a hit squad, the US president may be forced to appear in court.

Regardless of this, "Trump will resist such an outcome vigorously," Bisharat noted.

Earlier this year, Iran said it was planning to file a lawsuit at the International Criminal Court (ICC) against Trump over the killing of top Iranian General Qassem Soleimani.

While the case has yet to be filed, and the US is no longer a part of the ICC, there is strong evidence that Trump violated international law. 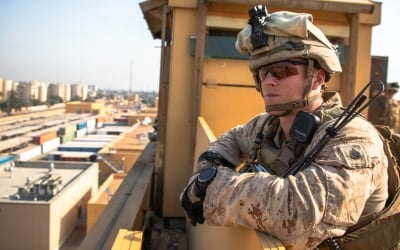 Still, without the proper jurisdiction, any case would only be a public relations move on the part of Iran.

"I don't believe President Trump faces a realistic possibility of indictment by the ICC due to the absence of jurisdiction over this alleged crime," Bisharat said.

The law professor noted that many of the violations Trump committed dealing with foreign countries will most likely not see their day in court. But there is still a chance that Trump will be tried for the myriad of other crimes he is accused of.

"To those who believe President Trump has committed numerous violations of law, both domestically and internationally, these may feel like disappointing conclusions," Bisharat said.

"But the possibility that President Trump may face investigation and prosecution for financial crimes, possibly by the State of New York, if not by the US Justice Department, still seems fairly high."