US imposes sanctions on Iran in defiance of European humanitarian concerns In addition to sanctions, a drop in oil prices and a slump in the global economy have deepened Iran's economic crisis (AFP/File photo)
By
MEE staff
in
Washington

The US imposed a tranche of sanctions on Iran's financial sector on Thursday, defying European allies who warned the move would limit Tehran's ability to purchase humanitarian imports amid a worsening currency crisis and the coronavirus pandemic.

The Treasury Department announced that it was blacklisting 18 major Iranian banks, effectively cutting Tehran off from the international financial system.

In a statement, the Treasury said it had "identified the financial sector of Iran's economy as an additional avenue that funds the Iranian government's malign activities".

European nations have opposed a blanket sanctioning of Iran's financial sector because it exposes European banks that do business with the blacklisted banks and other companies to punitive measures by Washington.

Treasury Secretary Steven Mnuchin said in a statement that the decision to target the 18 banks wouldn't hinder the Islamic Republic's ability to access humanitarian aid, but instead reflected a "commitment to stop illicit access to US dollars".

"Today's actions will continue to allow for humanitarian transactions to support the Iranian people," he said.

But critics have long contended that US sanctions have obstructed the flow of vital food, medicines and other humanitarian aid to the country.

A senior European official told the Washington Post that the UK, France and Germany had expressed fears that the new sanctions would freeze Iran's foreign assets, "thus further exacerbating the shortage of foreign currency to pay for humanitarian imports".

After the sanctions were announced, Iranian Foreign Minister Mohamed Javad Zarif accused the US of wanting to "blow up our remaining channels to pay for food & medicine".

Last year, the Islamic Republic imported $1bn worth of medical goods and grain worth $3.5bn.

"Iranians WILL survive this latest of cruelties," Iran's chief diplomat said on Twitter. "But conspiring to starve a population is a crime against humanity. Culprits & enablers - who block our money - WILL face justice."

Despite calls from UN officials and governments to halt sanctions during the Covid-19 pandemic, the Trump administration has not relented in its "maximum pressure" campaign launched after it unilaterally withdrew from the Iran nuclear deal with world powers in 2018.

Last month, the US defied its European allies by announcing the reimposition of so-called "snapback" sanctions.

Virtually every other member of the Security Council disputes Washington's eligibility to execute this legal turnaround, and the council has not taken the measure any further.

In June, the Iranian rial dropped to a historic low, with a US dollar being offered for as many as 193,300 rials.

In addition to sanctions, a drop in oil prices and a slump in the global economy have deepened the economic crisis.

Barbara Slavin, the director of the Future of Iran Initiative at the Atlantic Council, said the sanctions were "sadism masquerading as foreign policy".

"They won't bring the Iranian government to its knees but will hurt ordinary people, encourage more smuggling and in the long run, undermine dollar-based sanctions," she wrote on Twitter. 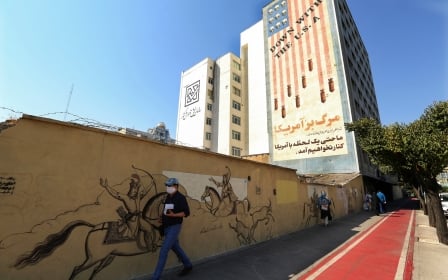