Iranians struggling to access medical treatment under weight of US sanctions: Report

Iranian patients with rare diseases are feeling the effects of American sanctions, says Human Rights Watch in a new report Three percent of Iran's medicine is imported, including the bulk of what it needs to treat rare diseases and cancer (AFP/File photo)
By
Umar A Farooq
in
Washington

Released on Tuesday, the report found that Iran was suffering from a countrywide shortage of specialised medicine and medical devices - and the health of Iranian citizens has suffered as a result.

"We very often hear from Iranian patients that what they're having access to is the lower quality medicine," HRW research Tara Sepehri Far said during a panel discussion to unveil the report's findings, hosted on Tuesday by the Atlantic Council, a think tank in Washington.

The Trump administration began reimposing strict economic sanctions on Iran in late 2018 as part of its "maximum presssure" strategy against the country.

While the US sanctions included humanitarian exemptions, the penalties for violating the measures and the complex laws that govern them have deterred many financial institutions from being involved in any transactions with Iran, HRW said.

"There is no acute, nationwide shortage of medicine in Iran at this point," Far said. "But people who are suffering from rare and special diseases are already seeing the negative effects of sanctions."

Iran produces 97 percent of its medicine domestically, HRW said in its report.

The remaining three percent is imported, and that includes the bulk of the medicine the country needs to treat rare diseases, as well as multiple types of cancer.

One such disease is Epidermolysis Bullosa (EB), a rare genetic condition that causes the skin to blister. EB currently affects more than 800 people in Iran, and it has generally been treated in the country with a special foam that is made in Europe.

After the reimposition of the US sanctions, the non-governmental organisation that had been providing this medication to Iranians "decided not to conduct any business with relation to Iran for the time being", HRW said in its report.

A similar situation has afflicted Iranian cancer patients, many of whom are children, who are no longer able to access specialised medicine in the country.

Payvand Seyedali, a representative of the US non-profit Child Foundation, said that 44 percent of the children her organisation works with in Iran have "medical fears".

"What I'm seeing happen now is a movement from individual stories to a much more en masse humanitarian crisis unfolding," Seyedali said during Tuesday's panel.

The International Court of Justice, the United Nation's top court, ordered the US in October 2018 to ensure that its sanctions would not affect humanitarian aid to Iran.

However, HRW said in its report that this is what has happened in practice.

In addition to various targeted sanctions, the US designated Iran as a jurisdiction of primary money laundering under the US Patriot Act.

According to the designation, financial institutions must conduct "special due diligence" on accounts they hold with Iranian banks to ensure money associated with humanitarian trade is not used "to develop ballistic missiles, support terrorism, or finance other malign activities".

The designation is seen by critics as an excuse for the US to obtain information on Iranian banks, and furher deter financial institutions from doing any business with Iran, even if it is humanitarian in nature.

The US Treasury Department said on Friday that it planned to set up a channel to help humanitarian products get into Iran.

'We've had doctors telling us that the situation is not stable, we're taking it day by day and we're running out of time'

But Adam Smith, a lawyer and former official in Barack Obama's administration, said on Tuesday that it was "not entirely clear what they're talking about".

While HRW said Iran must be more transparent in its financial transactions, the rights group said that the US should take concrete steps to ensure that the "humanitarian exemptions" allow Iranians to access the care they need.

It also called on the European Union to work with the US on a "viable channel of financial transactions for humanitarian aid".

"Iranians are feeling this impact, and the exemptions on paper alone are not enough," Far said.

"We've had doctors telling us that the situation is not stable, we're taking it day by day and we're running out of time." 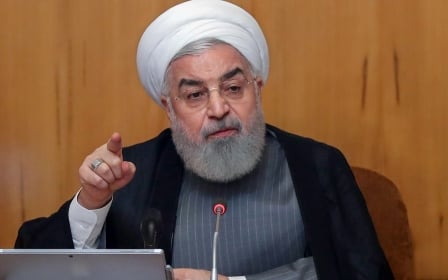