Opposition in Washington is mounting against an enormous arms deal with the United Arab Emirates that would introduce new weapons systems to the Gulf region, including advanced killer drones, F-35 jets and $10bn of munitions.

The proposed package, approved by the US State Department in November after Abu Dhabi agreed to formalise diplomatic relations with Israel, is facing pushback from US lawmakers and rights groups.

"The Emiratis are an important security partner, but their recent behavior indicates that these weapons may be used in violation of US and international law," Murphy said in a statement.

"The UAE has violated past arms sales agreements, resulting in US arms ending up in the arms of dangerous militia groups, and they have failed to comply with international law in Libya and Yemen."

Weapons sales do not require congressional approval once certified by the State Department, but lawmakers can block them by passing legislation.

Earlier this week, a coalition of almost 30 advocacy groups penned a letter urging Congress to disapprove the sale.

"The planned arms sales to the UAE, a party to the conflicts in Yemen and Libya, would fuel continued civilian harm and further exacerbate these humanitarian crises," the groups said.

"Delivery of the sales would undermine US national security interests by fueling instability, violent conflict, and radicalisation in the Middle East and North Africa and would also send a signal of impunity for the UAE’s recent conduct, which includes likely violations of international law."

The letter was signed by prominent groups, including the Center for International Policy, Project on Middle East Democracy (POMED), Democracy for the Arab World Now (DAWN) and Win Without War.

The departmental approval of the sale came with the UAE's move to sign a normalisation agreement with the Israeli government, which helped Abu Dhabi circumvent a US policy that requires maintaining Israel's military superiority in the region.

The UAE and Israel have never been at war and had maintained unofficial ties for years, but the normalisation accord allowed the Trump administration to justify the sale despite laws mandating that Washington protect Israel's so-called Qualitative Military Edge (QME).

"The UAE’s historic agreement to normalize relations with Israel under the Abraham Accords offers a once-in-a-generation opportunity to positively transform the region’s strategic landscape," Secretary of State Mike Pompeo said in the statement approving the sales on 10 November.

"Our adversaries, especially those in Iran, know this and will stop at nothing to disrupt this shared success. The proposed sale will make the UAE even more capable and interoperable with US partners in a manner fully consistent with America’s longstanding commitment to ensuring Israel’s Qualitative Military Edge."

But beyond the issue of QME, human rights advocates argue that Abu Dhabi's role in regional conflicts - particularly in Yemen and Libya - as well as its human rights record at home should disqualify it from acquiring advanced weapons.

Elias Yousif, acting director for the Security Assistance Monitor at the Center for International Policy, said the sale represents an "unfortunate endorsement" by the US government of Abu Dhabi's regional interventions.

While most recent headlines have noted the UAE's quest to acquire F-35 jets, Yousif said the munitions and drones are more urgently "troubling".

"These drones and munitions pose a real threat to civilians and to peace in the region immediately," Yousif told MEE, "especially when you consider the fact that a lot of those munitions are the very same kinds of munitions that have been found across Yemen, and the drones could substantially increase the UAE's ability to conduct hostilities in Libya."

On Tuesday, the Pentagon accused the UAE of funding and supporting Russian mercenaries fighting against the UN-recognised government in Libya. Abu Dhabi has been backing forces loyal to eastern Libyan commander Khalifa Haftar in defiance of an international arms embargo on the North African country.

The UAE is also a major partner in a Saudi-led coalition that has been accused of war crimes in Yemen, a conflict that has killed more than 100,000 people and brought the nation to the verge of famine in what the UN calls the world's worst humanitarian crisis.

Yousif lauded the effort to block the deal in Congress, but noted that outgoing President Donald Trump would likely veto a bill against the sale.

Last year, the US administration issued an emergency declaration to finalise arms sales to Saudi Arabia and the UAE without congressional approval. When Congress passed legislation to halt the deal, Trump wielded his veto power against the measure.

'It seems a little paradoxical to be buying peace with arms'

Congress needs a two-third majority in both the House of Representatives and the Senate to overturn a presidential veto.

"But I do think the message that it's sending to the incoming Biden administration, and to the Gulf itself is a worthy message," Yousif said.

"I'll also note that Congress has the ability - as does the president - to intervene in the future of the sale up until the point of delivery. So this sends a message but could also present practical challenges to the eventual sale of these weapons."

President-elect Joe Biden will be sworn into office on 20 January.

In an interview with MEE earlier this week, Congressman Ro Khanna, a leading voice in Washington against the Yemen war, rebuked the sale.

"I am concerned, especially given the UAE's huge role in the Yemen war. I don't think that peace can be achieved based on the transfer and sale of weapons," Khanna told MEE.

"While I'm glad that the UAE has recognised Israel, that doesn't mean that we start to supply them with weapons that can lead to an arms race, and that can give them more of an opportunity to commit atrocities like they have in Yemen." EXCLUSIVE: Iran tells MBZ it will hit UAE in response to a US attack
Read More »

Yousif echoed Khanna's statement. "It seems a little paradoxical to be buying peace with arms. I'm not sure how much you can celebrate 'peace' if it's being substantiated by enabling violence in the region," he said.

Earlier this week, Human Rights Watch (HRW) called for a US arms embargo against Abu Dhabi in a statement that also dismissed the UAE's normalisation agreement with Israel as a justification for the weapons deal.

"In continuing to sell weapons to the UAE, US authorities are ignoring pervasive evidence of airstrikes and other attacks by the Saudi and UAE-led coalition in Yemen that unlawfully killed civilians," said Sarah Holewinski, Washington director at HRW.

"US officials' desire to reward the UAE for recognizing Israel should not entail complicity in unlawful deaths in Libya and Yemen." 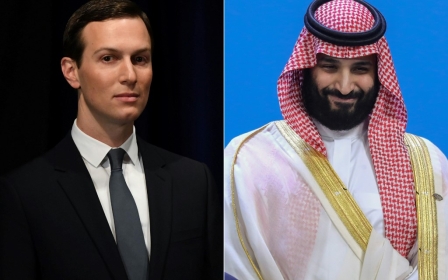