Vengeance, violence and bread queues - life under IS in Libya

In Gaddafi's hometown, residents say they are cut off from the outside world and live in fear of IS attacks - and revenge killings in response It was another weekend of violent atrocities and shortages of basic commodities for those living in the 300km stretch of central Libyan coast that the Islamic State (IS) group controls.

IS militants in former leader Muammar Gaddafi’s hometown of Sirte renewed their reign of terror on Friday by executing two imams and stringing up their bodies in public. One was said to be a Sufi sheikh and the other a respected Salafi imam.

“Salafis are widelyspread in Libya and have a lot of influence over local people and they are hated by Daesh [an Arabic acronym for IS] because of this and because they believe in state institutions,” said Musbah, one former Sirte resident, living in Tripoli since he fled his home two months ago.

News of the killings spread first online, through IS social media. The town has been virtually cut off from the outside world after armed militants forced employees at Sirte’s communication centre to close down telephone and internet networks. Apart from a brave few using satellite communications in secret, residents are now only able to use a public internet cafe established by IS, primarily for foreign fighters to communicate with their families outside Libya.

“One of my friends overheard an Egyptian in the internet cafe urging others to come to Sirte, saying life is good here and you can have a house and a car,” Musbah said. “But those are our homes and cars that Daesh has taken because so many residents have fled.”

Fuel stations and banks stood closed, and queues snaked out of bakeries running short of flour, he said. Food supplies and humanitarian aid initially sent by both Libya’s rival governments had stopped after delivery drivers were accused of being spies.

The last fuel supplies to reach the town were five tankers originally heading to the southern town of Jufra, which were commandeered by IS members from Sirte and their drivers abducted at a rogue checkpoint two weeks ago.

Not so safe haven

Sirte residents are now forced to drive 150km east to the town of Ben Jawad to fill up with petrol or make telephone calls, facing the threat of being stopped at IS checkpoints which sporadically appear along the highway.

The IS black flag has not yet been raised in Ben Jawad, which militants have used for months as a supply base for fuel and commodities as well as medical supplies seized from the town’s hospital. But locals have become terrified of retribution after an IS member was shot dead in the town on Saturday afternoon while shopping for building supplies.

“These two Daesh people were buying construction materials. One was inside the store and the other was standing outside with their vehicle, and he was shot by three men with their faces covered who then ran away,” Ben Jawad resident Mohamed told Middle East Eye. “Both those Daesh guys are local men. We know them and they know us.”

He alleged that the militant inside the shop at the time of the attack was a close relative of a member of Libya’s official parliament, which sits in the eastern town of Tobruk.

“This is a big problem that no one wants to talk about. Although many Daesh fighters here are foreign, this branch of the Islamic State was founded by local people from one of the largest tribes in this area and the tribe will try to protect them,” he said.

After the attack, IS militants seized CCTV footage from the shop to try and help identify the perpetrators. Residents say they are now terrified of the inevitable retaliation from IS. “We know they will take revenge and we expect it will be severe,” Mohamed said.

Speaking on condition of anonymity, another local said by phone that he suspected the killing was revenge for an IS attack on a checkpoint near Sidra oil export terminal a fortnight ago, which left three local men dead.

Just 20km east of Ben Jawad, Sidra and the nearby oil complex and refinery of Ras Lanuf - both currently inactive - have long been the main employers for local people. For over two years, both facilities have been under the control of Ibrahim Jadhran - a leader of the federalist movement demanding greater autonomy for eastern Libya.

“People expected Jadhran to react because it was his checkpoint IS attacked but he has done nothing apart from announce support of the new UN government,” the resident said. "We have a culture of revenge here in Libya and the murder of a family member rarely goes unpunished.”

Although Sirte remains the IS stronghold in central Libya, Ben Jawad’s proximity to these oil facilities makes it strategically important. The attack on the Sidra checkpoint was locally seen to be testing security responses, as part of larger plans to gain control over some of the country’s most significant oil infrastructure.

In the days leading up to the Sidra attack, senior IS personnel met with tribal leaders in the area under its control. “IS said they planned to take over the oil crescent and warned tribal leaders not to stand in their way,” Mohamed said. “They also issued a statement calling employees from Ras Lanuf infidels because they worked for a state institution and demanded that they repent.”

Life has been steadily deteriorating for Ben Jawad residents. Apart from the dwindling food stocks and medical supplies, schools have not yet opened for the new academic year, after IS militants stopped a lorry carrying school supplies and destroyed textbooks deemed incompatible with their ideologies.

Although life had become “completely miserable” in the town, Mohamed said, many were reluctant to abandon their homes and join the estimated 400,000 Libyans already living as displaced people. He added that some friends in Sirte had fled to Tripoli but, finding no support or help in the capital, had ended up returning to their homes and the daily threat of IS.

“We don’t know what will happen next but we expect the situation will only get worse,” he said. “The roads are not blocked but it is clearly not safe and lorry drivers are no longer willing to take the risk.”

Only first names have been used to protect identities. 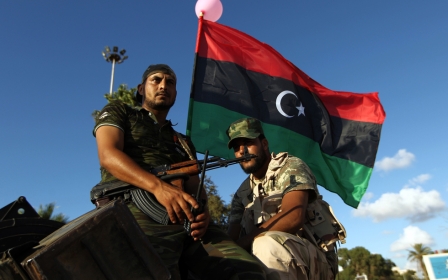