Voices from Gaza: What does Nakba mean to you?

During Nakba Day events in Gaza on Thursday, Palestinians stopped to tell the Middle East Eye in their own words what the Nakba means to them 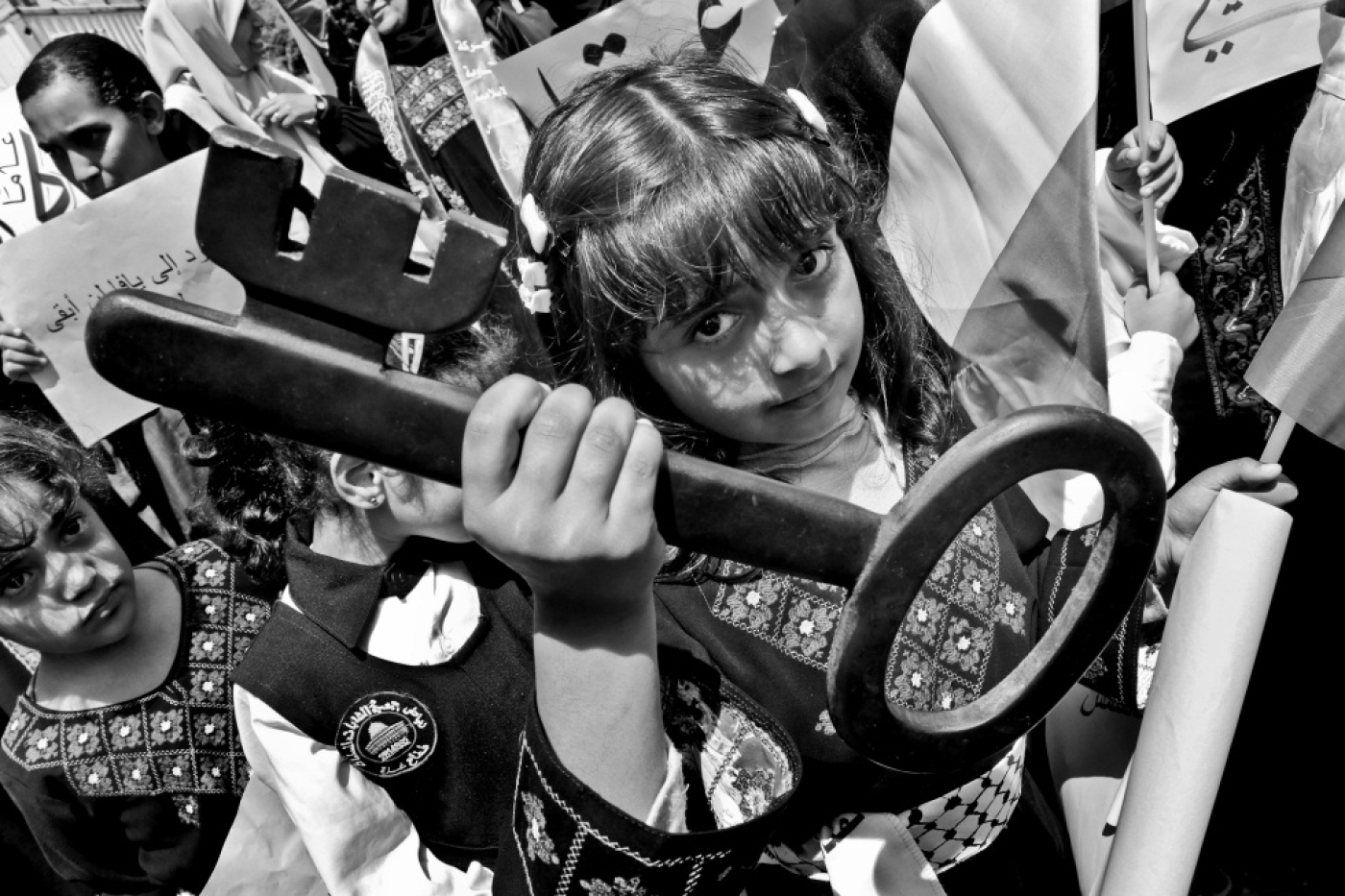 Abdelwahaab Abdallah Halwa is one of many Palestinians displaced from Hooj, now the site of the Israeli settlement of Sderot, to the Gaza Strip. Now 77, he worked for many years as a construction worker in modern-day Israel.

“My family were farmers,” he said Thursday in northern Gaza's Jabaliya refugee camp, where he now lives. “I was farming during the day when the Israeli army attacked the village next to mine. News came that they had killed a lot of people. We were afraid and left the village.”

Following the May 1948 attack, Halwa's family were driven by advancing Israeli forces through parts of both modern-day Israel and the Gaza Strip, he said.

“My trip from Hooj to here went through a village called Dirma, then another called Herbia, then Beit Lahiya, then Jabaliya camp. We spend about two months in every village.”

Like the group of men with whom he sat on a Jabaliya sidewalk on Thursday, Halwa said his determination to return, 66 years after his expulsion, remained strong.

“I will not forget the place I was born,” he said. “If I lived a million years, I would not think of any place other than my original village.”

“I hope to return there before I die, to end my life in peace,” he added.

“I left Hamama when I was very young, but I remember it well,” Miriam Abed al-Hameed said Thursday. “If I return to it now, I will know every single part of it.”

The 85-year-old, a housewife, was driven from the village after its November 1948 capture by the Israeli army, which dynamited it a month later.

After spending most of her life in Gaza's al-Shati refugee camp, al-Hameed still hopes to finish it in Hamama, she said.

“I hope to return to Hamama and spend the rest of my life there,” she said. “I miss my family's house and fields: the grapevines, the olive trees.”

“I send my regards to my land by you,” she added.

Rana Najjar and her family were expelled from its village of Hooj, now site of the Israeli settlement of Sderot, 54 years before the 12-year-old was born.

“In the Nakba, Israel occupied our land and forced my family to leave its village,” the sixth-grader said Thursday in northern Gaza's Jabaliya refugee camp. “If it had not, I would be studying at a school in Hooj, instead of the UNRWA school.”

But never having seen her family's home has made her more eager to see it, she said.

“I want to return to Hooj to live there peacefully, like any other child in the world,” she added. “Return, to me, means no wars, no bombardments, no injuries, no martyrs and no prisoners.”

Mohammed Shaban Alaaraj, now 62, is too young to remember the Palestinian city of Yafa before his family was driven from it 66 years ago. But like some other Palestinians, who worked in Israel between its 1967 occupation of the Gaza Strip and the 2005 redeployment of its ground forces and settlers from the enclave, he has visited both his native city and his family's home in it.

“I lived 20 years of my life in Yafa, when the crossing was still open,” he said Thursday in northern Gaza's Jabaliya refugee camp, where his family now lives. “I still have relatives there, and used to stay with them for a few months at a time. I last visited Yafa in 2002.”

“In 1969, I visited my house in Yafa,” he continued. “I found a Jewish-Iraqi family living in it. I asked the woman to let me visit it. She accepted and was very hospitable. I visited the house twice.”

“I told the woman living in it that I would one day return, or if not me, my children or grandchildren would. She replied that she hoped I could, and that she could go back to her home in Iraq.”

“I also visited my family's land in Yafa,” he added. “It was about 20 dunums, planted with orange trees. This was in 1972. Later that same year, they levelled the land and built houses on it.”

His time in Yafa, Alaaraj said, whetted his appetite for a more permanent return.

“The return means everything to me,” he said. “I am willing to sacrifice anything for it. And I said this to the woman occupying my house. I already have a martyred son, killed in 2004 when he was 24 years old.”

“In 1948, my grandfathers and grandmothers were forced to leave their lands,” Bilal abu-Nasser, 14, said Thursday. “My grandfather was a farmer.”

“The deeds to our land in 1948-occupied Palestine are with the mayor of our original village, Beit Jerga,” the teen's father volunteered from the stoop behind him, where he sat in Gaza's al-Shati refugee camp. “They are written in Turkish. His grandfather's lands are 250 dunums.”

Bilal, a ninth-grade student in an UNRWA school, has never seen Beit Jerga, a village located north of the Gaza Strip that was captured and depopulated by the Israeli army in 1948. But like many Palestinian refugees his age, he said he is determined to return to it.

“Return, to me, means living in a safe place, with freedom and the right to travel,” he said. “It means everything to me.”

“Living in a refugee camp is not a real life,” he added. “At least we wouldn't suffer from electrical and water cuts in Beit Jerga.”

“Our life in Herbia was very good,” Aisha al-Kaloub said Saturday. “We were comfortable there. We farmed peacefully. We planted wheat, potatoes, tomatoes, eggplant, sugarcane.”

“If I hadn't been forced to leave it, I would be living in a big house, not a small one with an iron roof,” the 74-year-old said, gesturing at her cinderblock home in Gaza's al-Shati (“Beach”) refugee camp.

Al-Kaloub, a housewife who worked as a servant when she was young, said that her family, which had been scattered in different parts of Palestine, reunited after their expulsion.

“I came here with my brother, because my father was already dead by the Nakba and my mother had remarried,” she said. “I later met her here in Gaza.”

Like many other first-generation refugees, al-Kaloub had a long trek from her native village, two km north of the Gaza Strip, to her refugee camp near its center.

“After we left, I lived for a year and a half in an area called al-Mushahera, next to Jabaliya,” she said. “Then we went to al-Fwakhier. Jabaliya camp hadn't yet been established. That year, it snowed heavily, so they built Jabaliya camp. They gave every family a tent, and we gathered there. I stayed for five years. After I married, I came to al-Shati camp. I've lived here 45 years, I guess.” 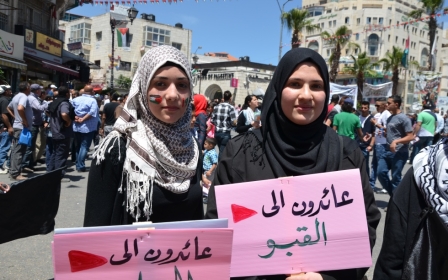 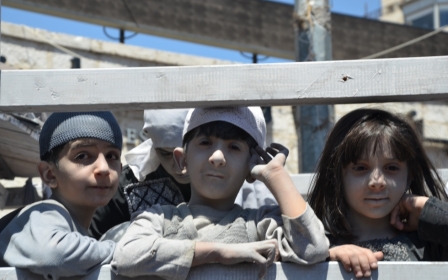 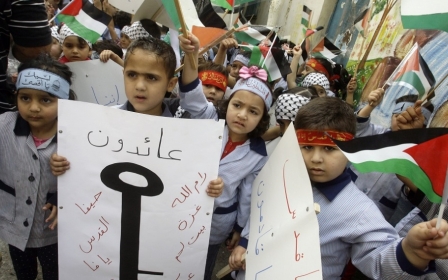