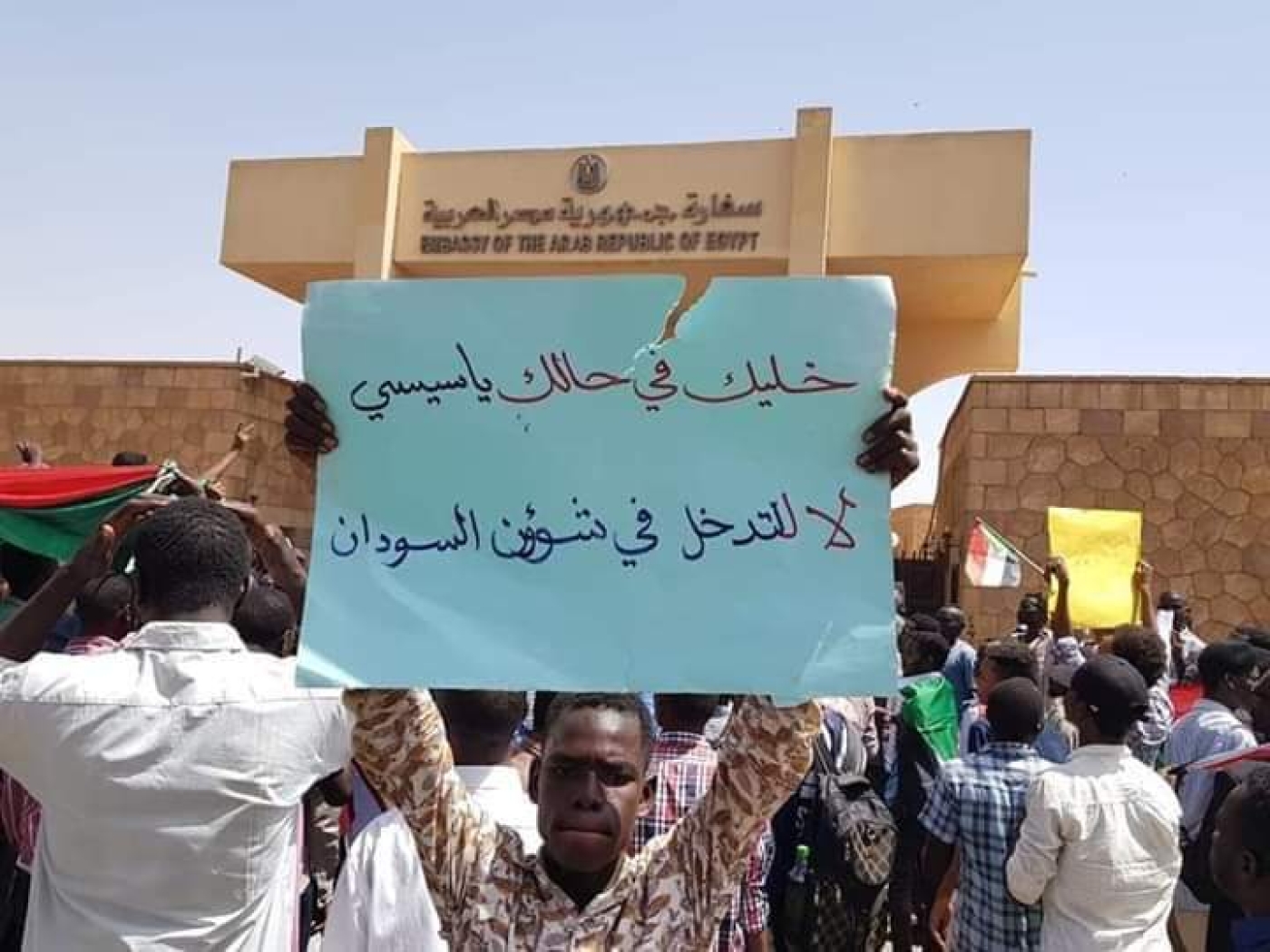 Sudanese protester outside Egyptian embassy in Khartoum on Thursday holds a poster reading: "Mind your business Sisi. No to intervention in Sudanese affairs". (Twitter)
By
Mohammed Amin
in
Khartoum

Sisi's recent intervention calling for Sudan's military to remain in power for three months was widely rejected by demonstrators in Khartoum.

"Tell Sisi this is Sudan, your borders are just [until] Aswan," Sudanese pro-democracy protesters chanted, referring to the border with Egypt, Sudan's neighbour to the north.

Demonstrations in Sudan have not ceased since longtime autocrat Omar al-Bashir was ousted after 30 years of rule on 11 April.

The military who removed him, however, have not put power into the hands of civilians, much to the people's chagrin.

This week, after meeting with African leaders, Sisi said that the military council currently ruling Sudan should be allowed three months to implement reforms and ensure a smooth handover of power.

On Thursday, it became clear that many Sudanese were vehemently opposed to this idea and to the messenger delivering it.

In Khartoum, thousands of people marched on the Egyptian embassy holding anti-Sisi posters, demanding an end to what they considered an "intervention" in their country's transition.

“Tell Sisi this is #Sudan Your borders end at Aswan”- Sudanese protest at the Egyptian Embassy in Khartoum #SudanUprising https://t.co/UsFj2kfPl3

Egyptian authorities have deported dozens of Sudanese activists and handed them over to Sudan in recent months. One of them, Mohamed Alim, commonly known as Alboushi, was deported by Egypt in October and held in a Sudanese prison for five months.

Alboushi, who was freed on 11 April after Bashir was toppled, addressed the protesters in front of the embassy, warning against an attempt by Sisi's government to export the Egyptian experience to Sudan by bolstering the military rulers to remain in power as long as possible.

He also warned that the current Egyptian stance would lead to real deterioration in the popular ties between the two nations.

"We respect the choices of the Egyptian people, and we expect them to do the same," he told the protesters.

Mohamed Youssef al-Mustafa, a leader in the Sudanese Professionals' Association (SPA), which has spearheaded the protests, accused Egypt, Saudi Arabia and the United Arab Emirates of  "supporting the counterrevolution in Sudan".

He said the Sudanese opposition disagreed with Egypt over military rule.

"We are very keen to maintain the Egyptian interest in Sudan," he told MEE. "But we clearly asked the Egyptians and other Middle Eastern states not to interfere in our domestic issues and to let the Sudanese choose how they want to be ruled."

Sudanese security expert Alabas Alamin told MEE that the Egyptian government seeks to maintain its interests in Sudan "by all means," including supporting the military council as a way of exercising influence.

Sisi is a former defence minister who came to power after leading a military coup against his predecessor, Mohamed Morsi, Egypt’s first freely elected civilian leader.

This week saw the approval of a string of constitutional amendments that gives Sisi the ability to stay in power until 2030.

The referendum process, according to analysts and rights advocates, was marred by the near total shut down of all spaces for opposition.

"The authoritarian Egyptian government would like to reproduce the Egyptian experience in Sudan, and that will only take place if they deal with military leaders rather than civilians," Alamin said.

Ismail Kushkush, an independent journalist and commentator on Sudanese affairs, said the Egyptian government’s approach to Sudan has historically been centred on security.

"There is a lot of rhetoric about brotherly relations and unity of the Nile Valley and so forth, but I think what is paramount has been the immediate interests of the Egyptian state," he told MEE.

He added that Cairo wants to make sure that Egyptian opposition elements, especially Islamists, no longer have any type of presence in Sudan.

Another concern, according to Kushkush, is that Egypt will try to pressure either the current council or any subsequent government to take its side in Nile water politics.

Analysts say that Egypt hopes Khartoum will take its side in the dispute over the Grand Ethiopian Renaissance Dam (GERD) project, which Cairo sees as a threat to its share of the Nile river.

Closer ties between Egypt and Sudan could arguably lead to Khartoum's cooperation in pressuring Ethiopia into slowing down the process of filling the dam, due by 2022, thus giving Egypt a chance to find alternative sources of water.

"Sudan has been more on the side of the Ethiopian government, but Egypt will try to push the Sudanese government to side with it in political negotiations around GERD," he said.

Egypt's 2011 revolution saw longtime ruler Hosni Mubarak replaced with a democratic system, only for Sisi and the military to take charge and implement a stifling authoritarian regime.

"The Sudanese protesters have lessons from their own history, from 1964 and 1985, not to trust the army, but also you have next door a vivid example of what happens when you put too much trust in the army to lead the transition," he said.

Another analyst, Gamal Ali, agreed. "The spread of democracy in Sudan would have its echoes in Egypt, and that is more dangerous for Egyptian rulers than the presence of Egyptian Islamists in Sudan," Ali told MEE.

"Egypt wants to secure its southern borders and wants to create a subordinate system in Sudan. A weak military council is the ideal option for it at the moment." Sudan Protests
'We failed many times': How Sudan's protest leaders seized their moment 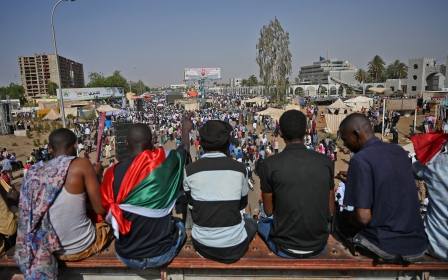