‘This is what the occupation looks like’: Israeli forces beat, arrest Palestinian farmers 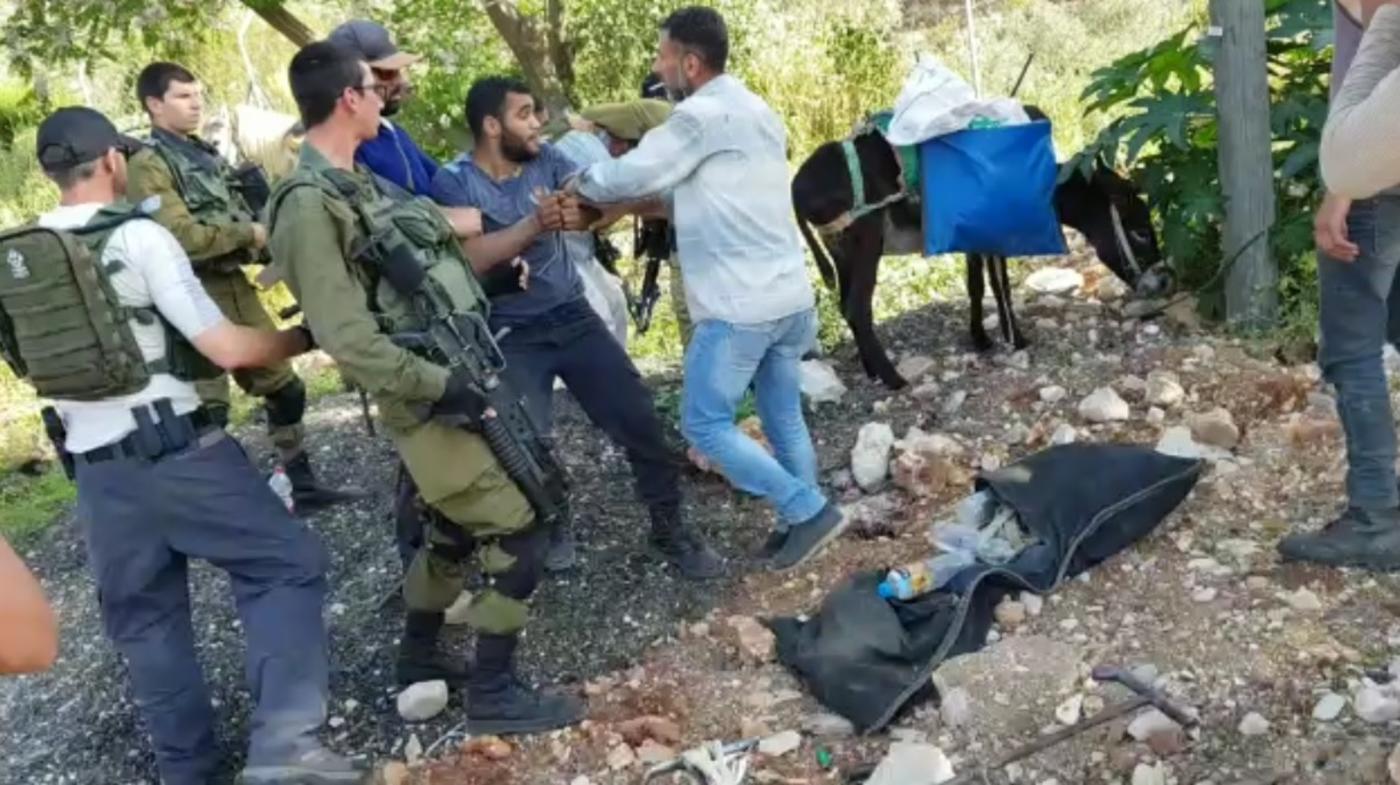 When the three Yousif brothers woke up on Sunday morning, it was with a sense of purpose.

The residents of the Palestinian village of Kifl Haris in the central occupied West Bank had a one-day permit from Israeli authorities to tend their land, located close to the nearby illegal Israeli settlement of Ariel.

They planned on enjoying the day and savouring it as much as they could. After all, this opportunity was a rare occurrence coming only a few times a year.

But what started off as a beautiful day spent with their children, relatives and neighbours tending to their crops turned into a nightmare.

By the end of the day, brothers Abd al-Rahim Yousif, 42, and Abd al-Karim Yousif, 22, were lying on the ground handcuffed, blood oozing from their faces as armed Israeli soldiers, police and settlers stood above them hurling racial epithets.

“It all happened so fast, we couldn’t understand why they reacted that way, it just didn’t make any sense,” Hussam Mahmoud Yousif, 39, told Middle East Eye as he recounted the events that led to his brothers lying bloodied, face down in the dirt.

We...were a little late. Is that a reason to beat someone so hard as they lay on the ground, in front of their children?

According to Hussam, the soldiers assaulted the family and their neighbours because they overstayed an arbitrary deadline by half an hour - an offence which has landed two of the Yousif brothers in Israeli jail for the past three days.

“They came at the last minute to tell us to leave, so we packed up as fast as we could, but were a little late,” Hussam said. “Is that a reason to beat someone so hard as they lay on the ground, in front of their children?”

According to the United Nations Office for the Coordination of Humanitarian Affairs, Israeli forces have injured at least 1,463 Palestinians in the West Bank since the beginning of the year - as the Hussam told MEE that the violence that has rattled his family was only the latest incident illustrating the brutality of the Israeli occupation.

Beaten for being late

As the Yousif family recounted to MEE, the relatives were tending to their land - mostly cleaning and maintenance of their olive trees - when their neighbours called them a little after 3:30pm.

“My neighbour told me that a group of Israeli soldiers had passed by, telling them that we all needed to be off the land by 4pm,” Hussam told MEE.

Hussam was surprised by the sudden change, given that the Yousif family’s permit allowed them to stay until 5pm - but his neighbour “told me we have to leave now”.

So Hussam, his brothers, their children, relatives, workers, and neighbours - totalling some 15 people - hastily packed up their equipment and loaded up their donkeys, while Abd al-Karim Yousif rode a horse.

But by the time they made their way back through the electronic gate of the militarised fence separating their land from Ariel, which is located adjacent to a military road and the main gate of the settlement, it was 4:30pm.

“When we arrived to the main gate of Ariel, we expected them to let us through, as they usually do,” Hussam said. But instead, the soldiers told the group to wait in a small grove on the side.

Then, as Hussam describes it, a group of armed soldiers and the settlement’s private security guard approached the group in an aggressive manner.

“They immediately went for my brother Abd al-Karim and tried to pull him off the horse,” he said.

According to Hussam’s account, a verbal altercation ensued between Abd al-Karim and the soldiers over the soldiers’ actions.

When Abd al-Karim agreed to get down from the horse, the soldiers immediately shoved him to the ground and handcuffed him. The soldiers and their captain then began shouting at the group of Palestinians, saying: “We told you to leave at 4pm! Why were you late?”

Hussam says the Israeli officers then began threatening the group with arrest. When the Palestinians asked why, they were told it was because they were late.

After a heated back and forth, one of the soldiers reportedly shoved Abd al-Karim down to the ground while he was already handcuffed and standing to the side.

At that point, his brother Abd al-Rahim jumped forward yelling at the soldiers - and things took a turn for the worse.

“There was a lot of pushing and shoving, a huge commotion between Abd al-Rahim and the soldiers,” Hussam said. “The soldiers threw Abd al-Rahim down and handcuffed him. Some of them held him down while the others kicked him in the stomach and face.”

The soldiers continued to beat both Abd al-Karim and Abd al-Rahim as they lay on the ground, their faces pressed to the dirt.

“They were kicking them in the stomach, back, and face. They hit their heads with the butts of their rifles until blood was spilling from their faces,” Hussam said.

“They just kept screaming and crying, my dad is dying!”

During the altercation, Hussam says that the soldiers, settlement security guard, and some Israeli police officers were cursing at his brothers, hurling racial epithets at the group.

“They were yelling horrible things at us while they beat my brothers,” Hussam said. “They were cursing our mother and sisters, saying they were going to ruin our lives.”

The Israeli officers reportedly shouted at the Yousifs “You fucking stupid Arabs!” and “You are Arabs, you don’t know anything!”.

Israelis regularly refer to Palestinians as '"Arab", as many reject the existence of a Palestinian identity.

“We couldn’t do anything, we just had to try to de-escalate the situation,” Hussam said.

“We knew that they have all the power, and they could do something horrible to my brothers if they wanted to.”

When the Yousif family finally managed to calm the situation down, they pleaded with the soldiers to call the police. When the soldiers refused, the Yousifs decided to call Palestinian emergency medical services for Abd al-Rahim and Abd al-Karim to get treatment.

But when the Palestinian ambulance arrived to the entrance of the settlement, the Israeli guards refused to let them in, saying there was no prior coordination through the Palestinian Authority liaison office.

But when the Israeli ambulance arrived, the family were shocked.

“The medics were clearly treating them haphazardly, like they really didn’t care,” Hussam claimed.

“My brothers were in really bad condition. There was blood everywhere, they couldn’t move,” he said, adding that the Israeli medics did not even attempt to put the brothers on stretchers in order to lift them into the ambulance.

“They just grabbed them by the limbs and started to drag them, it was horrifying.”

They just grabbed them by the limbs and started to drag them, it was horrifying

When the two brothers were loaded into the ambulance, the family were hit with another blow.

“The captain then told us that Abd al-Karim and Abd al-Rahim were being arrested for ‘attempting to steal the weapons of the soldiers’,” Hussam said, still in disbelief over the Israeli army captain’s words that day.

“I told him ‘You are crazy, we have video proof of what happened, our children were with us, why would we want to steal your weapons?’” he recounted.

“We have been coming to our land, using these same procedures for decades, why would we now want to steal their weapons? It doesn’t make sense.”

Hussam said he believes the soldiers were trying to cover up their actions, given the severity of the beatings his brothers endured.

“They knew it looked bad, so they had to come up with something to give themselves an excuse for what they did,” he said.

Hussam told MEE that both his brothers were still in Israeli custody as of Wednesday. At their preliminary hearing on Monday, the judge extended their detention to ten days until 15 May, pending another hearing.

“We can’t believe this is happening. We have video proof that we did nothing wrong, it was all the soldiers,” Hussam pleaded.

“But we have no idea what to expect. The soldiers and the settlers regularly get away with these types of things,” he said. “This is what the occupation looks like.” 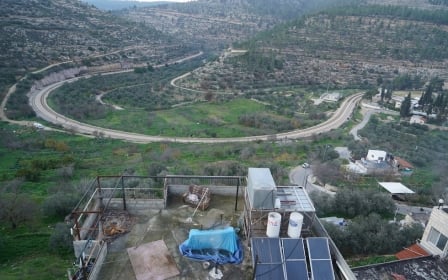