Reporters Without Borders (RWB) on Thursday condemned what it described as a “witch-hunt” carried out by Saudi authorities against internet activists.

A statement from the group calls for the release of leading Saudi human rights activists who remain behind bars over posts published on social media sites like Facebook and Twitter.

“We urge the authorities to reverse these decisions, to release all the netizens and human rights activists who are being denied their right to freedom of expression and information, and to abandon all judicial proceedings against them,” the group said in a statement.

RWB on 5 November gave its Prize for Press Freedom to Raef Badawi, a Saudi blogger sentenced in May to 10 years in prison after launching a liberal website.

The group’s Thursday statement highlights the cases of Mikhlif al-Shammari and Suad al-Shammari, two prominent activists who were arrested after sending controversial Tweets.

Al-Shammari, a co-founder with Badawi of the site Saudi Liberal Network, is the country’s first female lawyer. She was arrested in October over Tweets deemed to “incite women and society to rebel.”

Arrested over calls for co-existence

Mikhlif al-Shammari, a well-known writer and activist who has been imprisoned on multiple occasions, was sentenced on 3 November by a special criminal court in the eastern city of al-Khobar to two years in prison and 200 lashes.

Two weeks prior to his arrest, he was summoned to the General Intelligence Directorate in Khobar and ordered to close down his Twitter account.

In addition to his political activism, Shammari is well known in the Gulf kingdom for encouraging co-operation between the country’s Sunni majority and its marginalised Shiite minority.

Shammari famously led a delegation of Sunni worshippers to share Friday prayers with Shi’ites in a mosque in Saudi Arabia’s eastern region of Qatif in 2008.

Prior to his arrest, Shammari had published a call for “coexistence” between Sunnis and Shi’ites, promising to lead Sunnis in prayer at a Shi’ite mosque for a second time.

“I believe in the message of coexistence between sects of society and tolerance between Muslims – I will perform Friday prayers at the Hamza Mosque in [the eastern town of] Saihat with Imam Sayyid Hassan al-Nimr on 21 November.”

Shammari’s son, Abdel Rahman Mikhlif, last week condemned his father’s arrest, which he said was based solely on his calls for co-operation between the sects.

“My father Mikhlif’s crime was to associate with Shi’ites and to use Twitter to call for co-existence and unity," he said.

The allegations come as Saudi authorities struggle to gain control over religious leaders in the wake of a deadly shooting spree that killed ten people in eastern Saudi Arabia on 3 November.

The attack, dubbed “sectarian” by mourners at a mass funeral, occurred on the eve of a holy Shi’ite festival – authorities blamed al-Qaeda for the killings.

Following the attack, the Ministry of Islamic Affairs issued a statement urging the country’s Sunni clerics to use their Friday sermons to condemn the shootings.

However, the appeal was ignored by large numbers of religious leaders. 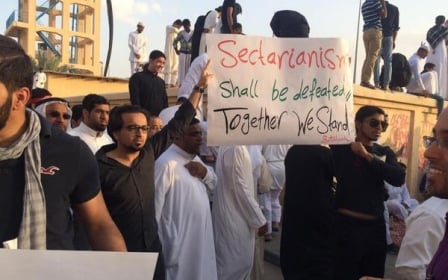 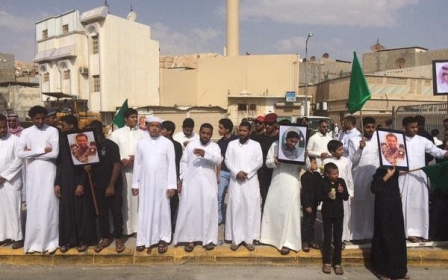