Women, children pay the price as Idlib hospital bombed out of service 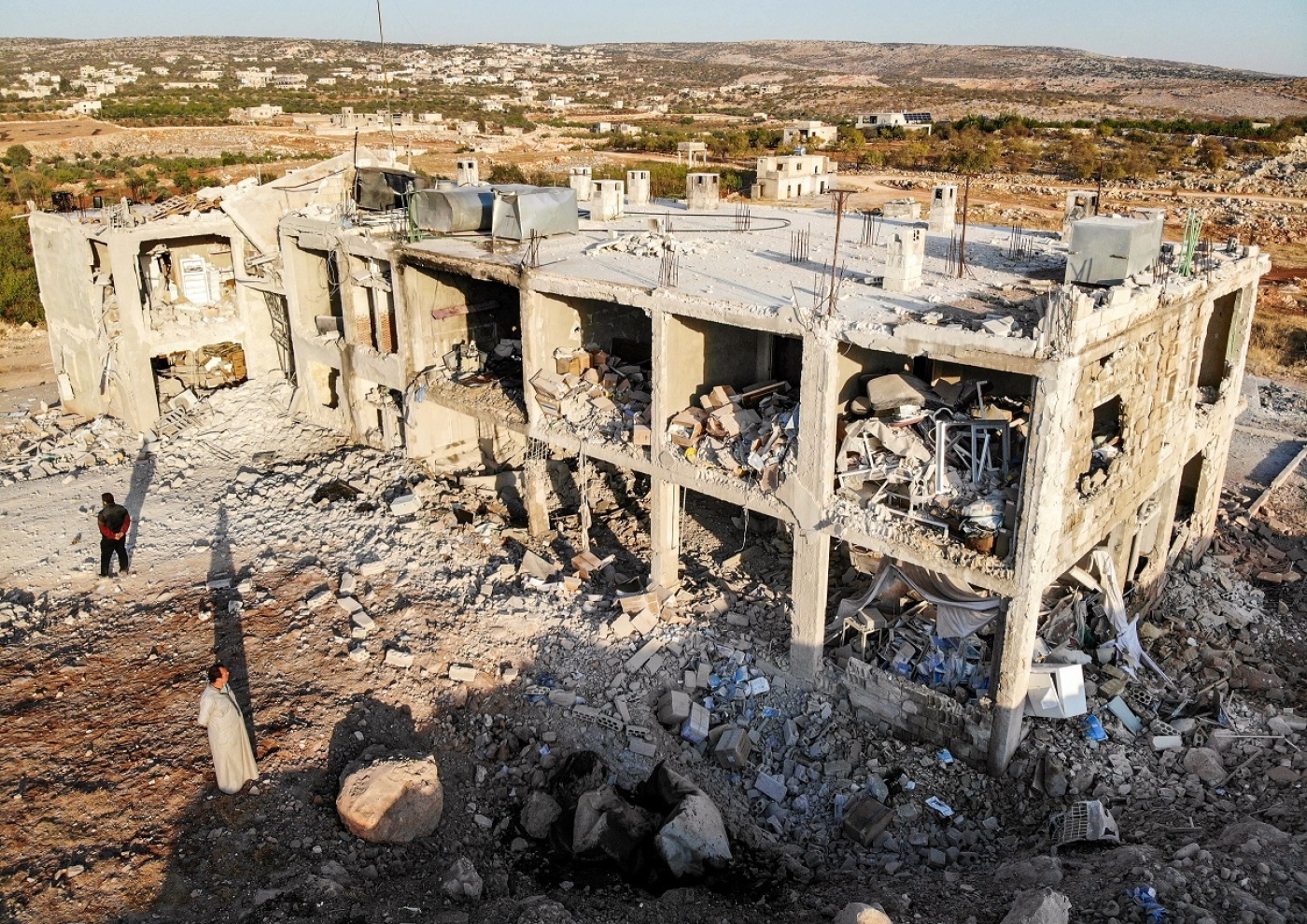 An aerial view of Al-Ikhlas Hospital taken on 6 November after it was reportedly hit in an air strike in the Syrian village of Shinan, Idlib. (AFP)

By
Madeline Edwards
in
Amman

Mai last took her ten-year-old son Omar to a nearby hospital in Syria's southern Idlib province for treatment last week. Omar suffers from a severe form of thalassemia, a blood disorder, and needs monthly blood transfusions to stay healthy.

Just two days later, alleged Russian warplanes bombed the hospital in a double air strike in the early hours of the morning, rendering it a pile of concrete rubble and destroying much of the equipment beyond repair. Several staff members were wounded.

Dozens of rooms were left hollowed out and overflowing with debris, as can be seen in photos shared with Middle East Eye by medical staff hours after the attack.

The hospital sits in a rural corner of Idlib's southern countryside, in a village some 20 kilometres north of the strategic highway city Maarat al-Numan.

Southern Idlib has seen a deadly escalation in air strikes and artillery fire since last week, according to residents and activists, as Syrian government and Russian forces barrel down on the country’s last remaining rebel stronghold.

Residents say the bombing is hitting their homes, hospitals and other civilian infrastructure.

Those who once relied on Al-Ikhlas Hospital for pediatrics and obstetric care are now left with few options, a week after the alleged Russian attack gutted the facility.

'The closest hospital to us now is 20 kilometres away'

Mai is no longer sure where she will take Omar for his next blood transfusion, which he will need in three weeks' time.

“The closest hospital to us now is 20 kilometres away,” she tells Middle East Eye, requesting pseudonyms for herself and her son for security reasons. “My husband would have to drive us there, in his friend’s car.”

Even so, simply visiting a hospital in Idlib province is now a gamble, as they are regular targets for bombing attacks by pro-government forces.

Some 46 medical facilities have been hit by air strikes and artillery fire since Syrian and Russian forces intensified their bombing campaign on Idlib in late April, according to SAMS, a medical relief organisation that funds clinics and hospitals inside Syria.

Among the bombed facilities are those that have shared their location coordinates with a United Nations “deconfliction” mechanism meant to prevent attacks on medical centres in Idlib.

But the list of deconflicted hospitals was also shared with Russia, among other warring parties, a move that has drawn criticism amid Russia’s participation in the bombing campaign on the province.

Al-Ikhlas Hospital had also shared its coordinates as part of the UN mechanism, staff there said after the double air strike attack.

More than a dozen people have been killed in the onslaught since last week, activists say.

They are among the more than 1,000 people killed by the bombings in Idlib since April, according to a UN count.

The latest escalation has also seen at least five attacks on medical facilities, according to SAMS, and a bombing attack in Idlib’s Jisr al-Shughour that targeted a Civil Defence facility.

Situated in Syria’s northwest, Idlib province is the country’s last major rebel-held territory as pro-government forces retook pocket after pocket of opposition control in recent years. Many former residents of those retaken territories have been bused north to Idlib, where some three million people now live crammed in poorly served displacement camps and rental homes.

The escalated bombing has only strained services further, as hospitals, markets and homes come under attack.

“I might just try to take Omar to regime territory if the bombs continue,” says Mai, though she has yet to make any concrete plans as her son’s next blood transfusion date nears.

“My husband refuses the idea, and I’m afraid of being detained, but my son’s health is my first priority.”

According to Adham, a nurse who worked at Al-Ikhlas before the attack, pregnant women are being hit the hardest by the loss of the hospital.

“Now they have to travel long distances to receive specialised medical care,” he says, requesting his family name not be published for security reasons.

Among the last pregnant patients to visit the hospital before Wednesday morning’s bombing was Rahaf, whose name has been changed to protect her identity.

'People here simply have no alternative'

A day before the air strikes hit, Rahaf visited Al-Ikhlas to check up on her pregnancy, then in its first trimester. Doctors found that her foetus had no heartbeat. “The pregnancy was over,” says Rahaf.

The next day, the hospital was a pile of debris.

“Thank God I wasn’t there during the attack,” Rahaf says by phone from her home in the village of Shinan, where Al-Ikhlas is located.

Now Rahaf says she must obtain a dilation and curettage, or D and C, a procedure doctors often perform on patients after an early miscarriage.

She is not yet sure where she will go.

Like Mai, Rahaf estimates the closest hospital she can visit is some 18 or 20 kilometres away, across a stretch of countryside pockmarked with bombings.

“Getting there is costly,” she says. “And people here don’t have a lot of money.”

The scale of the damage is simply too devastating, and bombs have continued to fall over the surrounding village of Shinan, he tells Middle East Eye by phone.

He tried to visit the hospital again on Wednesday, but was “unable to” as warplanes were flying overhead, making a visit too dangerous.

Without the facility, women and children in the surrounding towns have little else to turn to for specialised medical care.

“People here simply have no alternative.”