Yemen seaport becomes flashpoint in clash between government and UAE

Locals demand Emirati forces leave Balhaf, once an economic lifeline for Yemen but now a military camp for the UAE The Balhaf liquefied natural gas plant on the Gulf of Aden in Yemen (picture taken on 5 June 2010, AFP)
By
MEE correspondent
in
Taiz, Yemen

The United Arab Emirates first entered the war in Yemen in 2015 as part of the Saudi-led coalition aiming to unseat the Houthi rebels who had just captured the capital, Sanaa. The coalition was seeking to prevent the country becoming a potential hub for forces hostile to the Gulf states. Since then, however, the Emirates have become embroiled in the country's internal political struggles, backing the secessionist Southern Transitional Council (STC) against the internationally recognised, Saudi-backed government, and carving out much of southern Yemen as its personal fiefdom.

A case in point is the Balhaf seaport. Once an economic lifeline for southern Yemen, thanks to its production and export of liquefied natural gas (LNG), the port has for many years been in the hands of the UAE, which converted it into a military camp.

With the war in Yemen now in its seventh year, the governorate of Shabwah - where Balhaf is located - is once again largely in the hands of the internationally recognised government, who recaptured it from Emirati forces in August 2019. Only the Balhaf seaport remains under the control of the Emiratis, a situation which has enraged local Yemeni authorities, eager to see the port once again exporting gas to help jumpstart an economy currently failing to keep vast numbers of Yemenis above the poverty line.

'Balhaf is an industrial seaport for exporting gas and oil, not a military camp, so the Emirati forces and their supporters shouldn’t stay there for one more minute'

The seaport, which saw the construction of an LNG plant in 2006, has been under UAE control since 2016, a year after the country first intervened in Yemen. Shabwah's governor, Mohammed Saleh bin Adyo, has accused the Emiratis of hijacking one of the country's key assets and using it to foment "rebellion".

“The gas export facility in Balhaf should be a lifeline for the people in this difficult time, while you [UAE] are turning it from a source of collection and exportation of gas to save the currency and the country’s economy into an assembly of militias to export rebellion," he wrote on Twitter on 24 August.

The issue of the seaport's sovereignty is increasingly becoming a flashpoint - the UAE has in recent weeks attempted to start recruiting new fighters to the military camp and local authorities have responded by arresting them, while also setting up numerous checkpoints along the roads to Balhaf.

While there are fears over the impact of a confrontation between the two forces, locals are eager to see a major source of national income return to Yemeni hands.

“There are no Houthis in Shabwah, and Balhaf is an industrial seaport for exporting gas and oil, not a military camp, so the Emirati forces and their supporters shouldn’t stay there for one more minute,” Saleh, a resident of Shabwah, told Middle East Eye.

Saleh, who requested that only his first name be used, said the majority of residents in Shabwah opposed UAE presence in Balhaf, and that if the Emiratis really wanted to help fight the Houthis in Yemen, they needed to go somewhere else.

“The governor is going in the right direction now and we will support him for the sake of Shabwah," he said. "The fighters in Balhaf are also our brothers and all we need from them is to go to a military camp and leave Balhaf."

On Monday, a Saudi delegation met the governor in an attempt to mediate between Bin Adyo and UAE forces - but the outcome has yet to be made public.

A post on the Facebook account of the Shabwah province's media office stated that Bin Adyo discussed with the Saudi delegation "the violations by the Emirati forces in Balhaf and mobilisation of armed militias”.

A source working for the province office told MEE that the Saudis had met the governor on Monday but didn’t reach an agreement, after the Saudis tried to put forward some conditions requested by the Emiratis.

“The governor is the one who is responsible for the province and he is authorised to ask the Emiratis or any other foreign forces to leave the province,” said the source. “I need to know what is the purpose of the presence of the Emirati forces in Balhaf. They only create tension and clashes between An-Nukhba al-Shabwaniyya [elite] forces and the pro-government forces.”

An-Nukhba al-Shabwaniyya are supporters of the UAE-backed Southern Transitional Council (STC), who fought against pro-government forces as the latter recaptured the province in 2019.

The source stated that Saudi mediation was ongoing, but said the governor was insistent on Emirati forces leaving Balhaf.

Before the war, income from oil production constituted 70 to 75 percent of government revenue and about 90 percent of exports. But oil production came to a near-complete halt in 2015 when war erupted between government forces and Houthi rebels. The beginning of the Saudi-led coalition's operations in 2016 plunged Yemen into further economic disaster.

Public salaries dried up in 2016, and the Yemeni currency has since collapsed in government-controlled areas, from 215 to more than 1,000 Yemeni rials against the dollar.

An estimated 80 percent of Yemen's population – 24 million people – require some form of humanitarian or protection assistance, including 14.3 million who are in acute need, according to the United Nations.

'Chaos in the south'

STC presidency committee member Thabet Salem al-Awlaqi tweeted on Monday that the situation in Balhaf was stable, adding that government checkpoints had been removed from the areas surrounding Balhaf and that UAE-backed fighters who had been arrested had subsequently been released.

Supporters of the STC in southern Yemen have voiced support for the UAE, arguing that Emirati forces had helped them during the past six years and would continue to support them against Islah, and other attempts by northern Yemeni forces to take over their region.

Abdulrahman Obaid, an STC supporter, said the UAE was helping them more than the Islah party.

“The Muslim Brotherhood controls Shabwah, and they want to take over its national income. But we won’t let them do that, as they are mercenaries with the north,” he told MEE. “Shabwah belongs to the south and our leadership is happy to have Emirati forces in it, as they support the south; so no one else is authorised to speak on behalf of the south.”

He said the matter was broader than Shabwah, accusing Islah of sowing chaos in the south - which has long harboured ambitions of autonomy or independence - and trying to take over.

“The Islah party let the Houthis take over the north and come to fight us over our land. They should go to fight the Houthis either in Shabwah or in any other provinces, instead of creating chaos in the south," he said.

Since 2015, Yemen has become a battleground for numerous international actors. Their geopolitical squabbles have been imported into the country, something which is angering many locals, who say they want nothing to do with them.

“If Balhaf reopens and gas exports were resumed, the whole country would benefit and the incomes will go to the state treasury - so the presidency should take actions and we will support on the ground in Shabwah,” he said. “I don’t want to see people from Shabwah divided between opponents and supporters of the Emirates, while our leadership is silent." 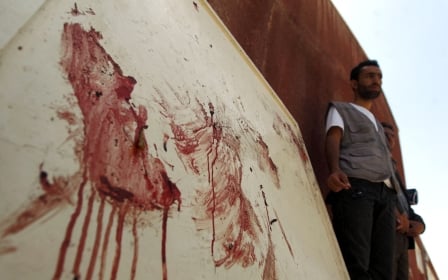