Ethiopians dying in camps after dangerous journey through Yemen 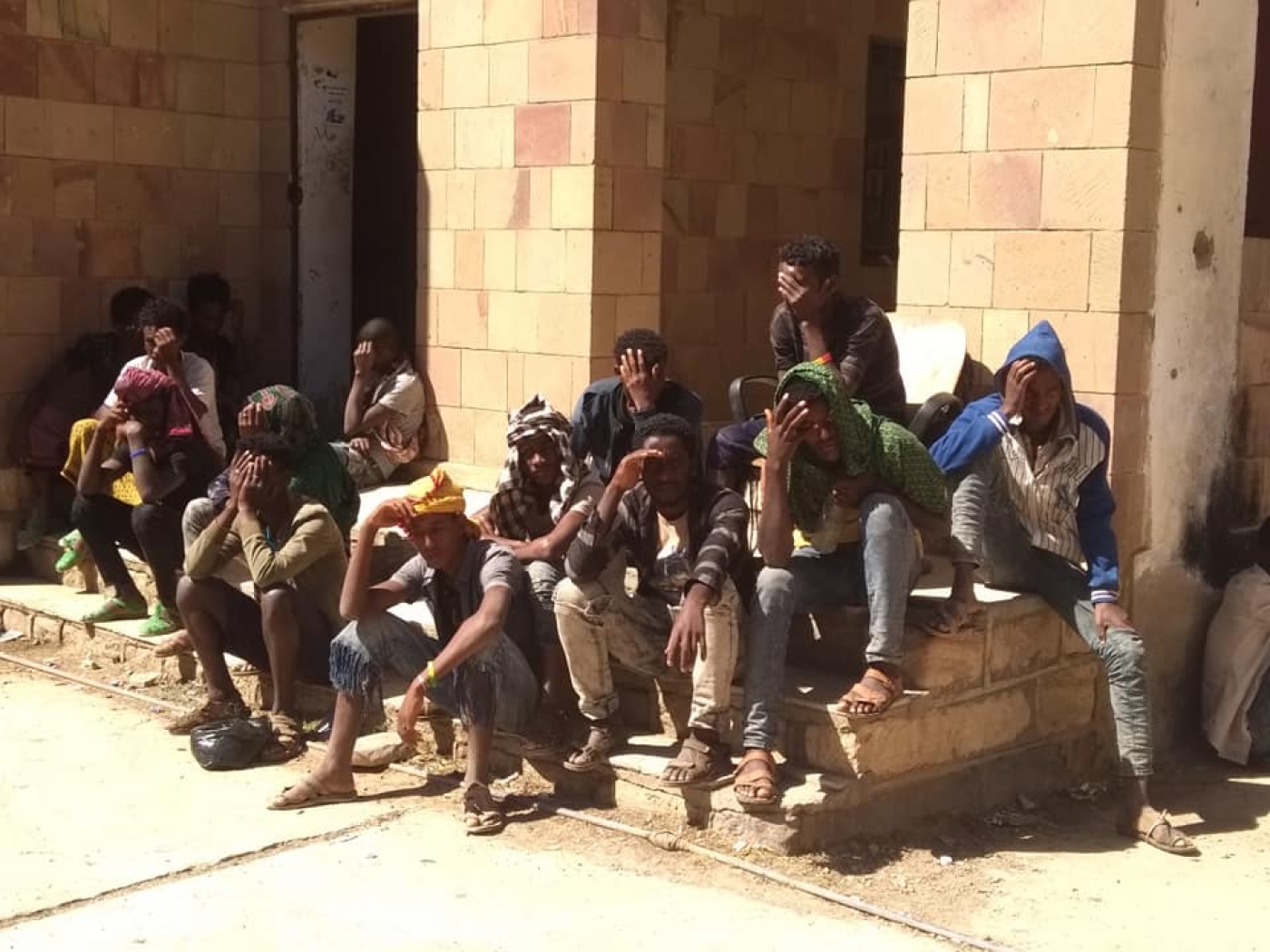 Zahrah Mohamed arrived in Lahj province in the middle of April, along with more than 70 Ethiopian refugees, after a journey from her home country to Djibouti and then a four-day sea journey with smugglers to the Yemeni port city of Aden.

“We fled our home for the sake of better life but we found it worse and we do not know what we are going to face in coming months,” she said.

The authorities arrested Mohamed, an Ethiopian refugee woman in her 30s, with a dozen other refugees between the provinces of Lahj and Taiz while they were walking on foot and imprisoned them in the Public Compound of Taiz’s Al-Shimayateen district.

Yemeni authorities have kept arrested refugees inside sport stadiums, military camps and sometimes in the yard of public institutions under the direct heat of the sun.

The International Organization for Migration (IOM) has expressed its alarm at reports of migrants dying of preventable illnesses, being shot and suffering other inhumane treatment in makeshift detention centres in Yemen.

On Tuesday, the UN agency called for the release of more than 3,000 migrants, mostly Ethiopians, held in two detention centres in southern Yemen.

The majority of Ethiopians travelling to Yemen - as many as 98 percent in 2016 according to the Mixed Migration Centre - belong to the Oromo minority, who are majority Muslim and have long faced persecution and intense poverty in Ethiopia.

“We have been suffering from hunger in Ethiopia and we fled to Djibouti. There I learnt Arabic language and then we were smuggled on a boat to Yemen,” she added.

“I arrived to Yemen four days ago and we have been walking for four days until we arrived to this area that we do not know.”

Zahrah hardly speaks Arabic while most of the other refugees cannot speak Arabic at all, depending on people like Zahrah to translate for them. On top of that, they have no food and only a bottle of water on their backs.

"Water is the most important for us as we walk all the day under the sun's rays - some generous people help us with food on our way and at night we sleep anywhere. We prefer places near to residential areas which are safe.”

The situation for Zahrah and her colleagues is worsening in the Public Compound without food and no one to help them.

“When we were outside the prison, generous people helped us with food but now no one," she explained.

“We are Muslims and we fled our houses after our conditions worsened. We hope that organisations and generous people help us.”

Zahrah and her colleagues know the situation in Yemen and do not plan to stay here. Their main hope is to pass through and reach Saudi Arabia.

“Our destination is Saudi Arabia where many Ethiopians have already arrived through Yemen. It is easy to get to Yemen, but it is difficult to arrive in Saudi,” she added. “However if we find proper work in Yemen we will stay - we have families in Ethiopia and we need to pay for them.”

Another refugee in the same compound - who spoke neither English nor Arabic - said that he had not known the other refugees in the compound until he met them in the boat.

“We belong to different areas in Ethiopia but suffering gathered us in the same journey to Yemen and we decided to go together until we arrive to Saudi Arabia,” he told MEE, with help from Zahrah.

During the journey from Djibouti to Yemen, the refugees faced difficult situations as the smugglers forced them to swim for several kilometres in the sea to avoid being captured by Yemeni authorities.

Many refugees did not make it.

It is not only Ethiopians who are trying to flee Yemen. Yemenis themselves are trying to leave the war-torn country for Saudi Arabia through smuggler routes. Although the journey is unsafe, desperate people risk their lives to make it.

Some refugees in the compound are suffering from acute water diarrhoea (AWD) and only severe cases received healthcare, according to Zahrah.

“Three people here suffer from cholera and only one was taken to hospital while others did not receive healthcare,” she said.

“What we need is food and healthcare until they free us to complete our journey in looking for work.”

Last week, the IOM said it had also been monitoring a military camp in Lahj.

"At least eight migrants died from complications related to acute watery diarrhoea (AWD) at the Ibn Khaldoun Hospital in Lahj governorate," the group said in a statement on 2 May.

"Those migrants - predominantly Ethiopian - had been held at a military camp in Lahj where more than 1,400 people are detained.”

Authorities at the camp report they have detected at least 200 AWD cases. IOM’s team in Aden became aware of the mass arrest and detention of thousands of migrants and their detention in cramped buildings unfit for human inhabitation on 21 April.

Mohammed Abdiker, IOM’s director of operations, warned these migrants “at best, have only limited access to basic services or protection".

An official in Lahj Security Office confirmed to MEE: “When we find out that refugees are suffering from cholera or any other disease, immediately we send them to hospitals.

“Some organisations provide the refugees with healthcare in the detention centres and we do not prevent any organisation from helping," he added.

The security source in Lahj also said that provincial authorities are responsible for arresting any illegal refugees and investigating them.

He said that Lahj was "a sensitive area" due to its proximity to regions controlled by Houthi rebels, who have been in conflict with the Saudi-backed government of President Abd Rabbuh Mansour Hadi since 2015.

“Some of the refugees do not find work so they resort to fighting with the Houthis," he told MEE.

"We must stop the flow of Ethiopian refugees towards the Houthi areas."

He confirmed that recently, the authorities in Lahj had arrested dozens of refugees while they were on their way towards the Houthi-controlled areas.

'When we tell them they are walking in the wrong way, the continue towards Taiz and other Houthi areas'

The source did not deny that the refugees were kept under arrest and exposed to the full heat of the sun, but he said there was no place for holding hundreds of refugees.

Abdullah Amir, a resident of Lahj province, confirmed that recently he had seen a lot of Ethiopian refugees coming from Aden and going towards Taiz and other Houthi-controlled areas.

"Many refugees pass in our area asking about the way to Saudi Arabia and when we tell them they are walking in the wrong way, they continue to walk towards Taiz and other Houthi areas," he said.

Amir said the refugees were hungry and people of his area usually provide them with food.

"Most of the refugees are hungry women and I do not believe those hungry people are going to fight," he said.

Zahrah said that although her current living conditions were not better than life in Ethiopia, she did not want to return home.

“I hope that coming months will be better and I will find proper work. Many Ethiopians fled the country during the last years and they found work either in Saudi or in Yemen," she said.

“I believe that Yemenis will cooperate with us and I will bring my family to Yemen one day.”