Meron Rapoport
Netanyahu stands accused by the Israeli right of surrendering to the Palestinian street over the al-Aqsa metal detectors. With a submarine bribery scandal brewing, he has a lot of ground to make up 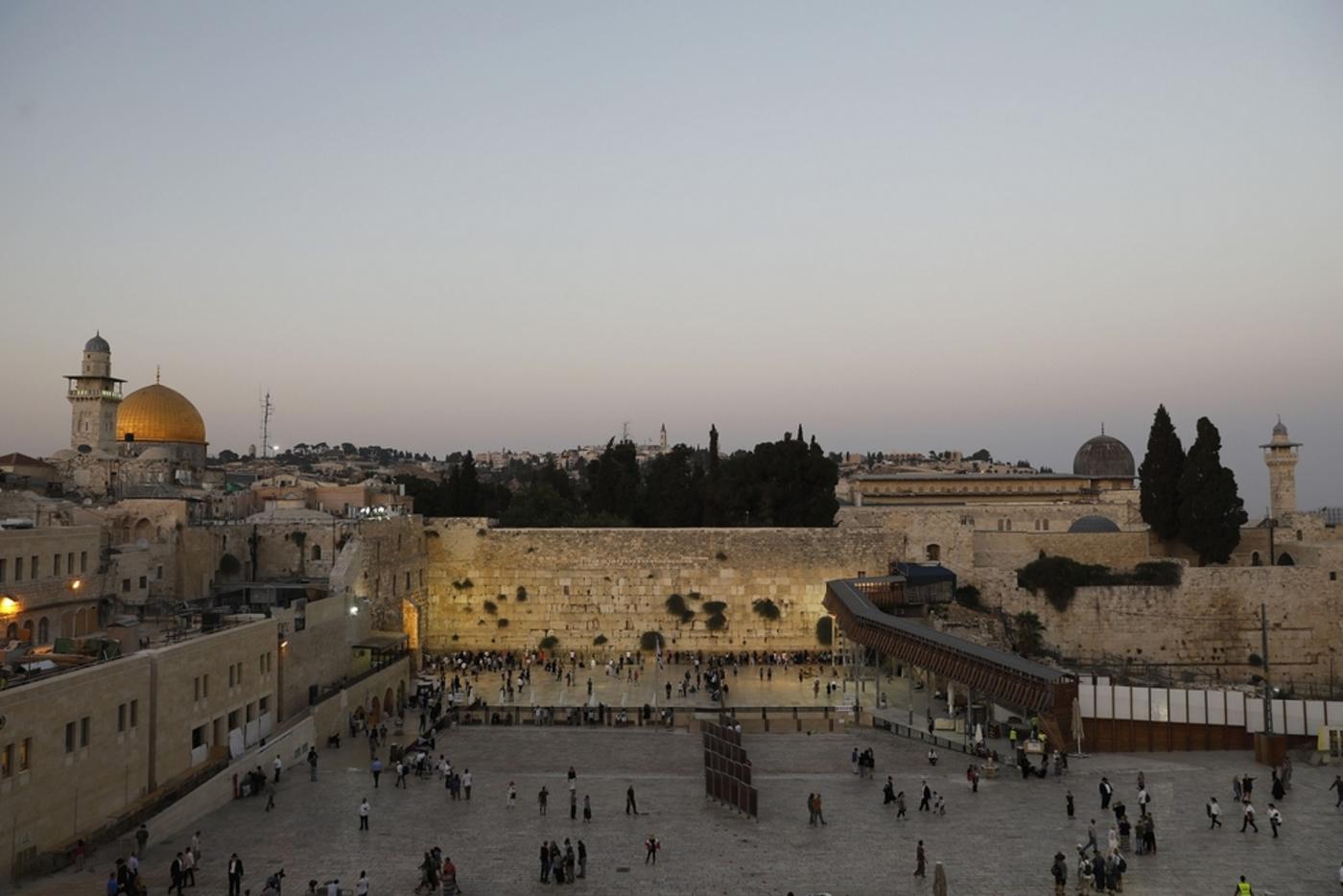 A week after the 1967 war, two poets sat down together to talk: Haim Guri, long identified with the Zionist left, and Uri Zvi Grinberg, who was always considered Israel’s right-wing nationalist prophet of doom.

Guri was celebrating victory in that war, and especially the conquest of Jerusalem. “The Temple Mount is in our hands,” said Guri emotionally to Grinberg, quoting the general commanding the paratroopers who captured the Old City. For Israelis, the phrase itself would later come to symbolise that war.

Fifty years on, Grinberg’s statement that Israel must control the Temple Mount / Al-Aqsa if it wishes to control the entire country still resonates with the Israeli right wing. Far from being a watchword solely among a tiny messianic fringe, however, the idea has gone mainstream and is accepted by the parties that today control Israel’s government.

This context makes intelligible the great disappointment among a broad swath of the country’s right wing at the decision by Prime Minister Benjamin Netanyahu last week to remove the metal detectors guarding access to Al-Aqsa. For those circles, the decision was not merely a complete surrender to Palestinian protestors and pressure from Jordan, but also a confession of failure in the struggle for control over the Temple Mount and, in consequence, of failure in the struggle over all of Israel.

Israel Today, the free newspaper distributed to hundreds of thousands of Israelis that until recently was considered very close to Netanyahu, has been highly critical of the prime minister precisely in this context. “We are running from the [Temple] Mount and the Mount is hounding us in pursuit,” wrote Dror Eydar, the paper’s senior commentator. The Jews in 1967 returned to Jerusalem as the city’s “legal masters”, Eydar said, but decided to repress their connection to the Temple Mount, which for the Jewish people is “a Pandora’s box of desires and fears.” Now is the time to open that box, he wrote.

Arieh Eldad, who is a former Knesset member from one of the radical right-wing parties and whose father was a friend of Grinberg’s, proffered a simple proposal in an interview at the end of last week in the national daily Maariv: to rebuild the sacred Temple on the Temple Mount, and afterwards get rid of all the mosques. Eldad, let it be noted, is not a religious man. For him, as for Grinberg who inspired him, the fact that the Muslim Waqf continues to control the Al-Aqsa compound, together perhaps with the fact that the Dome of the Rock is still standing intact there, is a manifestation of the failure of Jewish sovereignty generally in Israel.

The right-wing ministers in Netanyahu’s government have opted for less messianic language to criticise his decision. Some preferred not to attack Netanyahu personally, aiming their criticism at the leadership of the defence establishment, mainly the Shin Bet (General Security Services), which they said had demonstrated “cowardice” with menacing predictions of a new Intifada while seeking to persuade the prime minister to remove the metal detectors installed at the various entrances to the Al-Aqsa compound.

The images of tens of thousands of Palestinians celebrating the victory at the Haram al-Sharif last Friday only reinforced the feelings of defeat and humiliation on the right.

But in terms of their bottom line, the “messianic” critics like Eydar and Eldad differed but little from the more “realistic” critics. Netanyahu – argued his detractors from the Jewish Home party and even from Netanyahu’s own Likud – had ignominiously folded, handing a resounding victory to the Palestinians. The images of tens of thousands of Palestinians celebrating the victory at the Haram al-Sharif last Friday and hanging the flag of Palestine on the mosque of Al-Aqsa itself only reinforced the feelings of defeat and humiliation on the right.

Various Israeli and Palestinian commentators have noted, and rightly so, that what this amounts to is a return to the status quo. The occupation of East Jerusalem has not ended, Israel continues to oversee the entrances to Al-Aqsa, and Israeli police enter the Haram al-Sharif compound whenever they please.

And yet, for the Israeli right wing – which in recent years has greatly scaled up the pressure to change the status quo at the Haram al-Sharif to at least enable Jewish prayer there, and possibly more than that – these events comprise a painful acknowledgment that 50 years after the conquest (“reunification”) of East Jerusalem, Israel is still unable even to install metal detectors there without the Waqf’s permission and the assent of the young generation of Palestinians in Jerusalem.

This feeling of defeat is arriving at a very sensitive juncture for Netanyahu, politically speaking. In recent months, several police investigations against him have been scrutinizing gifts he received, but never reported on, from business figures. But while most right-wing voters view the gift-related investigations as a form of harassment against Netanyahu personally, in the last few weeks greater momentum has been building around an affair that is much more problematical from Netanyahu’s perspective.

According to news reports, David Shimron, Netanyahu’s cousin and his personal emissary for handling sensitive matters, is involved in an affair in which a German shipyard has offered a bribe in exchange for an Israeli decision to buy its submarines and ships.

No suspicion has emerged thus far about a direct or indirect connection between Netanyahu and the payment of bribes, but Netanyahu is known to have been behind the decision to buy the submarines and ships from Germany, contravening the position taken by then minister of defence Moshe Yaalon, who in fact was fired shortly after the deal was signed.

Yaalon has even hinted that Netanyahu was behind the Israeli agreement to let Germany sell submarines to Egypt despite Yaalon’s express opposition.

In a poll taken about 10 days ago, 55 percent of those questioned said that they don’t believe Netanyahu’s denials of involvement in the submarine affair. Any new revelations in this affair may certainly do further damage to Netanyahu’s standing, given his presentation of himself all these years as “Mr. Security.”

Commentators on the left have accused Netanyahu of exacerbating the crisis at Al-Aqsa to deflect attention from the issue of the submarines, but the accusation is not reasonable. What seems more reasonable is that Netanyahu refused for two weeks to remove the metal detectors, despite express warnings from the Shin Bet, because he feared that the framing of his decision as a surrender to the Palestinians would push leaders on the right to withdraw the support they have given him thus far in the submarine affair.

Either way, clearly Netanyahu is now investing every possible effort in the attempt to recapture his standing with right-wing voters and their leadership. He sees the threat to his leadership as emanating from that direction, not from the left. Against this backdrop one can understand his latest pronouncements of support for the death penalty for the Palestinian who murdered three members of a family at the settlement of Halamish on the West Bank on 21 July.

Netanyahu’s worry concerning those to his right also explains the leak about his suggestion to American emissary Jason Greenblatt to transfer jurisdiction over certain Palestinian villages within Israel to the Palestinian Authority as part of a final status agreement.

This sort of proposal has no chance of being actualised, both because the Palestinians will reject it and because there is currently no real negotiation taking place – but the fact of his raising it at all is meant to assure Netanyahu the support of right-wing voters who would like to see the fewest possible Palestinians living in the State of Israel.

On its face, the Al-Aqsa crisis would appear to be over. The Muslim worshippers have returned to the Mount, Israel has removed the metal detectors and cameras, and life in East Jerusalem has returned to its usual fraught routine. But it would be no exaggeration to predict that what happened this time around at Al-Aqsa will not be forgotten quickly: not by East Jerusalem Palestinians, who feel that they have managed to defeat Israel through the power of nonviolent protest; not by the Israeli right wing, which feels that it was humiliated in what it views as its holiest site; and not by Netanyahu, who will continue seeking legitimacy farther to the right.

Image: A general view shows Orthodox Jewish men and women gathering at the Western Wall (C) in Jerusalem's Old City between the Al-Aqsa mosque (R) and the Dome of the Rock (L) on July 31, 2017, during the annual Tisha B'Av (Ninth of Av) fasting and memorial day, commemorating the destruction of ancient Jewish temples some 2000 years ago (AFP)