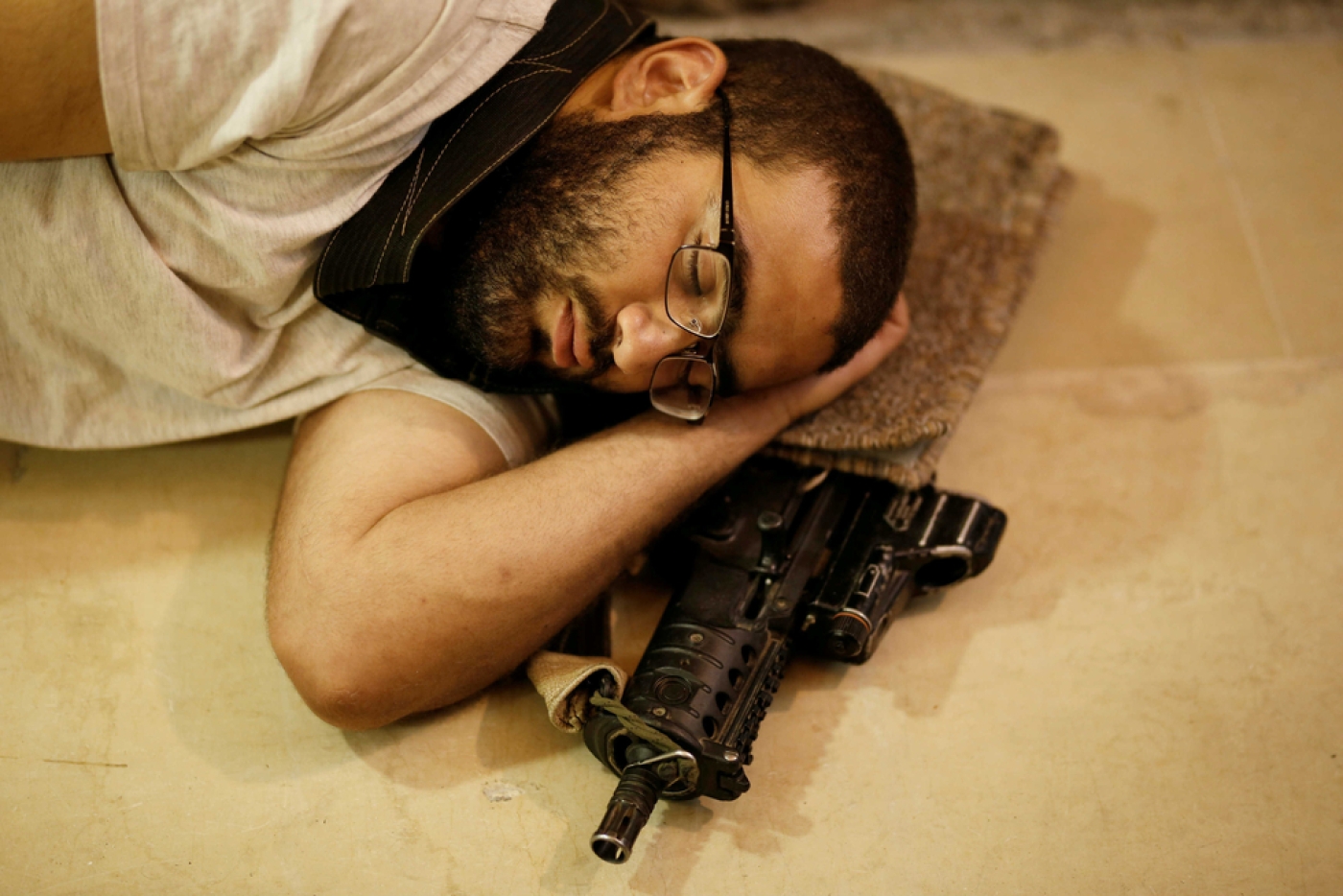 A Jewish worshipper sleeps next to his weapon near the Western Wall on Tisha B'Av in Jerusalem's Old City, 1 August (Reuters)
By
Jacob Burns
, Lubna Masarwa

JERUSALEM - Where days before thousands of Palestinians had prayed in the streets around Jerusalem's Old City in protests aimed at "defending" Al-Aqsa, last night Israeli flags flew and Israel's deputy defence minister gave a speech calling for Israel to impose its "full authority" on the Temple Mount so that the temple could be rebuilt.

Police closed off the march's route to Palestinians as around 300 people paraded through East Jerusalem. The march, organised annually for the past 23 years by Women in Green, a settler organisation, takes place on the eve of the Jewish Tisha B'Av festival, when Jews mourn the ancient destruction of the two temples.

Only when the temple is built will Jews be able to pray every hour and every day. No power in the world can stop the Jewish people, and we have to work to fulfil this vision

"This year the march has special significance because for the last weeks we have unfortunately undergone such humiliation by the enemy," Nadia Matar, co-chair of Women in Green, told Middle East Eye.

"The entire saga of those metal detectors was a horrendous feeling of victory for the enemy against our own government and we are very disappointed," she said.

The depth of hurt and anger that Israel's religious right feels after the events of the last few weeks were on full display.

"This year we got a reminder, after the terrible things that happened with the Arabs, that not everything yet is ours… and all of a sudden we understood how important it is to walk here," Matar later told the marchers.

"Every place we walk is yours, we are walking, and we are going to save Jerusalem."

The Israeli government installed metal detectors at the entrance to Jerusalem's most sensitive religious site after three Palestinian citizens of Israel shot and killed two Israeli police officers on 14 July at the site.

The move was seen as a violation of the status quo by the city's Palestinians, and two weeks of street protests followed. The metal detectors were removed on 27 July.

A Channel 2 poll broadcast on 25 July showed that 77 percent of Israelis characterised the removal of the metal detectors as a "surrender".

It was a view echoed in a speech given by Likud politician Yehuda Glick, a prominent temple advocate, who called on the government to stand by the "values of the people".

"The war against us is behind those walls," Glick said, referring to the Old City of Jerusalem. "The establishment of the state of Israel and the capture of Judea and Samaria was achieved by people who decided to go against logic and political considerations. Now we have to make our control over the Temple Mount a fact."

Eli Ben Dahan, deputy minister for defence, called for the temple to be rebuilt. Citing a portion of the Torah that talked about the renewal of the Jewish people, he said, "This will only happen if we have full authority on the Temple Mount."

"Only when the temple is built will Jews be able to pray every hour and every day. No power in the world can stop the Jewish people, and we have to work to fulfil this vision."

"It's not only enough to have sovereignty on paper, we demand from our government to implement its sovereignty and to show who's boss," Matar said.

As far as I'm concerned, the Palestinian people are a myth

Attendees at the march that Middle East Eye spoke to did not have any sympathy for the Palestinian refusal to accept the metal detectors.

"The metal detectors were just an excuse for unrest, the Palestinians should have walked through them like I do when I go to the Kotel," said Yechiel Goldstein, referring to the Western Wall.

"If the Palestinians can play nice, they're welcome to stay, but otherwise they should go."

"As far as I'm concerned, the Palestinian people are a myth," said Ari Gold, a Canadian. "They're very good at PR, and they made a lot of fuss over the metal detectors, but it's all a nonsense."

When asked if the violence that had ensued made him nervous about what could happen if the "status quo" at the Temple Mount/Haram al-Sharif compound was changed, he said the status quo was to blame.

"The status quo allowed them to bring a pistol and kill two people. Why are they arguing about metal detectors, because they want to bring more weapons up there?"

The status quo is the delicate agreement that has governed the religious site since Ottoman times, but firmed up after Israel captured East Jerusalem from Jordan in 1967.

While Israel retains control over access to the site, the site itself is under the control of the Waqf, a Jordanian religious trust.

Palestinian fears that Israel is attempting to change the status quo at the site have driven previous outbreaks of violence, such as riots in 2014, and the unrest that spiralled into a round of widespread attacks on Israelis in 2015.

The Second Intifada started in 2000 when then opposition leader Ariel Sharon visited the site.

God brought us to the land of Israel, we are strong, and we will overcome all the difficulties in our path

These fears have grown worse recently against the background of rising popularity of temple activism amongst some Jews. Traditional orthodoxy held that Jews were forbidden from visiting the Temple Mount, but increasing numbers have ascended in recent years.

On Tuesday morning alone, 1,042 Jews visited the Temple Mount/Haram al-Sharif compound, a single-day record, according to the Jerusalem Post. Another visiting period will be take place this afternoon.

Numbers have increased from 14,000 visitors in the last Hebrew year, to more than 17,500 this year, with six weeks still remaining, according to the Jerusalem Post.

So, while the crisis at Jerusalem's most sensitive site looks over for now, the dynamics that produced it are still in place, and growing in magnitude.

The speakers at the march last night were certainly not backing down.

"The locals have a feeling of victory," Glick, the Likud MK, said, referring to the Palestinians. "But it is temporary. God brought us to the land of Israel, we are strong, and we will overcome all the difficulties in our path." 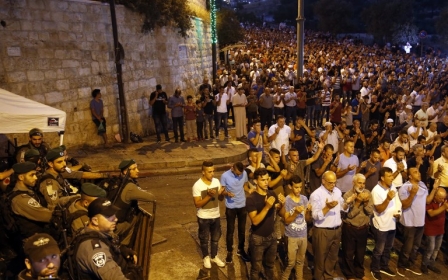 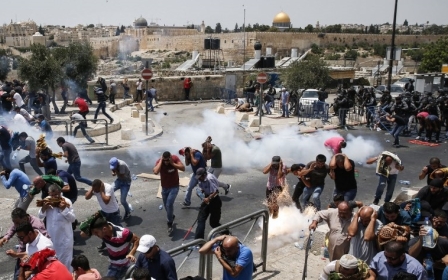 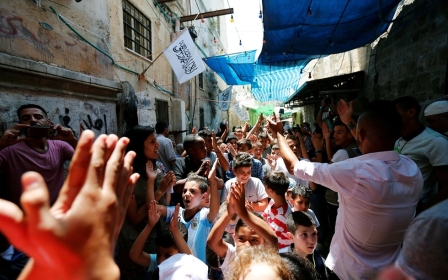