The BBC's sophisticated distortion of Palestinian protest and Israeli power

Ahmed Abu Artema
I was interviewed for the documentary 'One Day in Gaza'. It adopts Israel's narrative, portraying Palestinian victims as aggressors 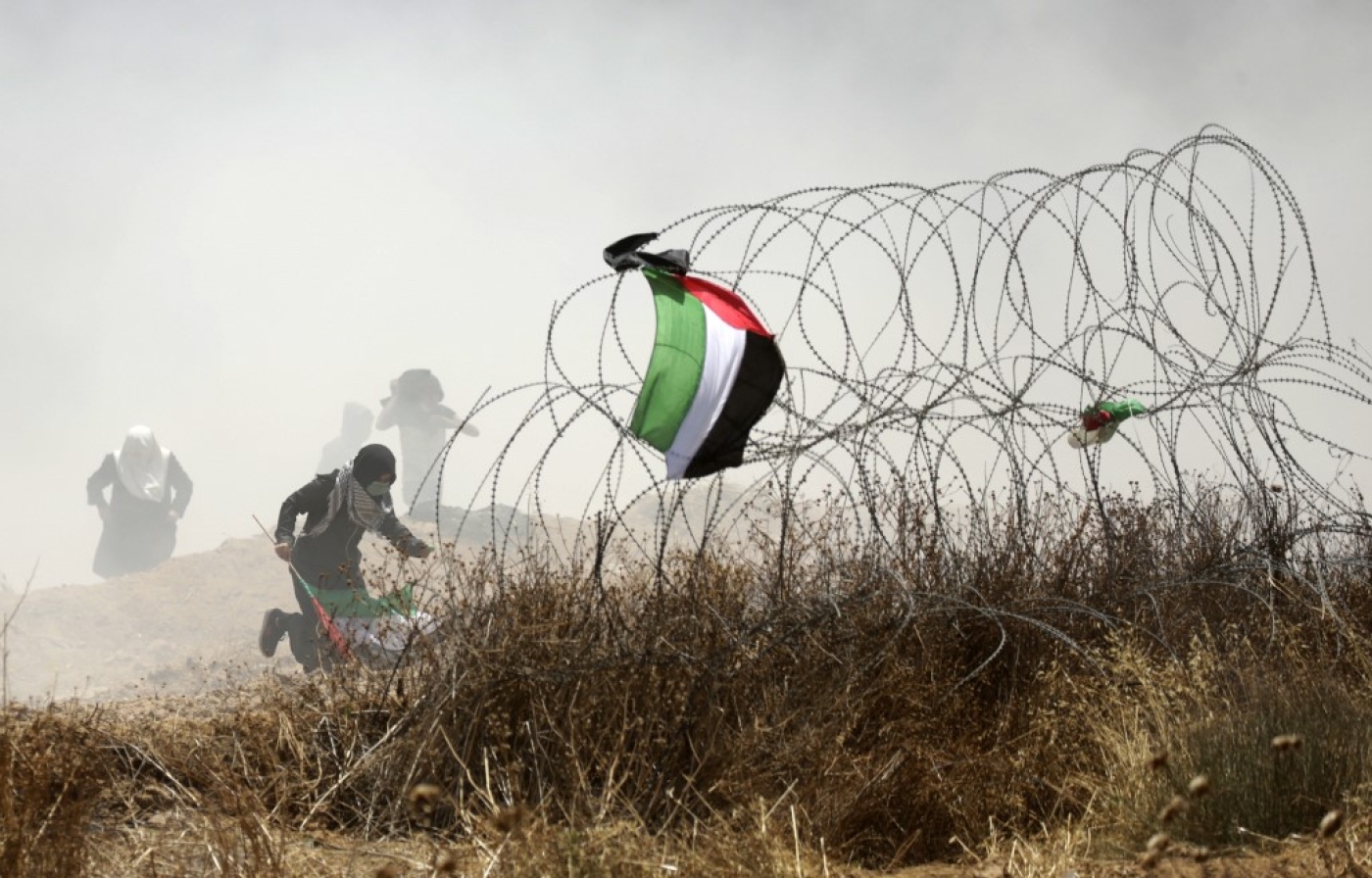 The BBC recently aired a documentary titled One Day in Gaza, which concentrated on the terrible events of 14 May 2018, during the Great March of Return.

Although more than 60 unarmed demonstrators were shot dead by Israeli army snipers that day and more than 2,000 injured, the documentary clearly and demonstrably leans towards the Israeli version of events, showing blatant disregard for the experiences and testimonies of the thousands of Palestinians in Gaza who participated that day.

To my undying regret, I took part in this programme - and for this reason, I feel I have a right to make clear exactly how and where the narrative of that day was twisted in the hands of those very skilful at rewriting Palestinian history.

An act of incitement

I do not write this lightly. To justify - even in a nuanced way that appears to give voice to both sides of events - the aggressor's version of the story is an act of incitement. This is not about whether the film reflects voices and stories on both sides. It's about how those stories are being told. In other words, it is the framing and the angle selected to tell that story.

The last 70 years of this conflict have shown the world very clearly that if Israel feels it can get away with one massacre, it will do it again. This is how the culture of impunity has been created. It is done with words and images. In this case, the BBC has been the loudspeaker, whether consciously or not.

The narrative of that terrible day, as portrayed in this documentary, is very clear, and largely uncontested by witnesses on both sides: A non-violent, civilian protest march was hijacked by Hamas and other groups that drove people to the fence - in some cases against their will - to be used as cannon fodder against a phalanx of Israeli snipers whose mission was to protect villagers, some living just a few hundred metres away.

Israeli commanders were portrayed as thoughtful and reluctant, torn between the duty to limit civilian casualties but to hold this thin wire fence, which we were told was only one centimetre thick.

This is a cynical travesty of the truth, as every Palestinian in Gaza knows. Instead of dwelling on the fact that these were non-violent protesters aiming to restore Palestinian dignity and end Israel's suffocating siege, the film portrays a twisted reality, in which demonstrations were led by an ideological organisation that denies the existence of Israel.

The role of civil society activists

Even though the Great March of Return was the product of an agreement among all Palestinian national forces, the documentary highlights the leaders of Hamas and Islamic Jihad, and some other Islamist figures, while neglecting the primary role played by civil society activists in Gaza.

One of the most damning scenes in the film comes when a Palestinian teenager declares his desire to chop off the head of an Israeli soldier. He describes other protesters, including one holding a rifle in an attempt to intimidate Israeli soldiers.

Another Palestinian youth claims that the protests were no longer non-violent, and that he wished to kill the soldiers and tear them apart.

Even when no biographical link to an armed group is found in the history of a shooting victim, the documentary damns him by association

Even when no biographical link to an armed group is found in the history of a shooting victim, the documentary damns him by association; one of his siblings, killed 16 years ago, was a member of the military wing of Hamas. How is that relevant to a victim shot in 2018?

The documentary does take the Israeli army to task on the case of Wassal al-Sheikh Khalil, the teenage girl whose death was recorded on camera. But even she is robbed of her innocence, called by Palestinian witnesses the "bank of stones" for her efforts to provide stones for the boys.

Kobi Heller, the commander of the Israeli army's Southern Gaza Brigade, was given free rein to say that as the Great March of Return had been deemed a military operation, military means were justified in stopping it.

The documentary alights on the testimony of a Palestinian woman who says women were human shields for the protesters, just as the Israeli army claimed. In normal parlance, human shields are unwilling hostages, used by ruthless gunmen who hide behind them, but these were willing ones.

This woman was acknowledging what neither the Israelis nor the BBC producers wanted to hear: that this uprising was popular. Despite the cost in lives, the marchers did not want it to end. That is why the march has continued for more than a year now.

The marchers, from all parts of society in Gaza, were defending their right to return home to the villages from which their fathers and grandfathers were expelled. This is a legitimate right, recognised by the international community. It's not history. It is reality.

The mother of Mousa Abu Hassanein, the paramedic who was shot dead by snipers, declares that she was taken to a faraway place which lacked any kind of medical services. Being enraged by this terrible situation, she was informed that these are orders of the organisers of the marches.

The documentary juxtaposes brutish images of rage and aggression in Gaza with an interview with a peaceful, elderly Israeli woman. Living just a few hundred metres from the fence, relaxing with a glass of water in her kitchen, she expresses her fear of what could have happened if the protesters had broken through.

Is this the BBC's idea of editorial balance? Where was the elderly Palestinian woman, wandering through the rubble of her house, still not repaired since the last Israeli assault on Gaza five years ago? Where were the pictures of all the fallen homes across Gaza that have never been rebuilt?

Instead, the people who did this to Gaza were portrayed as thoughtful, even concerned, about the lives of the people whom they have so comprehensively destroyed since 2007. A female intelligence officer, with her back to the camera, expressed the complexity of reconciling her concern for the citizens of Gaza with her aspiration to protect Israeli villages.

Sins of commission and omission

The documentary creates inevitable feelings of compassion for the "predicament" faced by every Israeli soldier who tried hard to avoid civilian casualties, but was tragically compelled to protect little-old-lady villagers from the brutish, barbaric, easily manipulated protesters who aimed to wipe Israel off the map.

These are the sins of commission. But what of the sins of omission? The documentary did not address the fact that for the vast majority of the day, Israeli soldiers were not exposed to danger and were not opening fire in self-defence.

One soldier was slightly injured and another was killed but outside protest sites, and shots were fired by an individual standing apart from one protest. No soldier or independent military analyst was brought to bear on this point. From inspiration to despair: A year of Gaza's Great March of Return
Read More »

I am not whitewashing these events, nor  do I attempt to justify everything that took place that day at the fence. But the film did not pay anything more than lip service to the essence of the Palestinian conflict - the struggle of a whole nation against displacement, massacres and occupation for 70 years. It did not recognise that the Great March of Return was yet another stage in the ongoing fight for Palestinian freedom.

The documentary did not show the reality of the prison that Gaza has become. One shot of the cattle market that exists at the Erez crossing would have been enough to convey the reality of this cage, where there is no freedom of movement, no economic growth, no future prospects - no hope.

Palestinians in Gaza are not robots, being moved around on a chessboard by the dark, unaccountable men from different Palestinian factions declared by the rest of the world as "terrorists". The masses of Palestinians participating in the Great March of Return were screaming their hearts out, demanding to be heard.

I am not denying that some violations were committed in the course of that terrible day. Knowing Gaza, I would have been surprised if they had not been. But once again, Israel and the BBC have succeeded in fashioning a narrative that turns the aggressor into the victim.

The true victims of that shocking day were the ones trying to break their chains, calling out for their lives, and knocking on the doors of their prison.

During a visit to Chicago, I was interviewed by the BBC for more than two hours for this documentary. They asked for my permission to air the interview, and I approved, under one condition: that they not twist my words or take them out of context. The documentary proved these concerns were well-founded.