BDS targets may differ, but our goal is the same

Nada Elia
In the global quest to attain justice for Palestinians, we must coordinate and celebrate each other’s success, from Beirut to the US 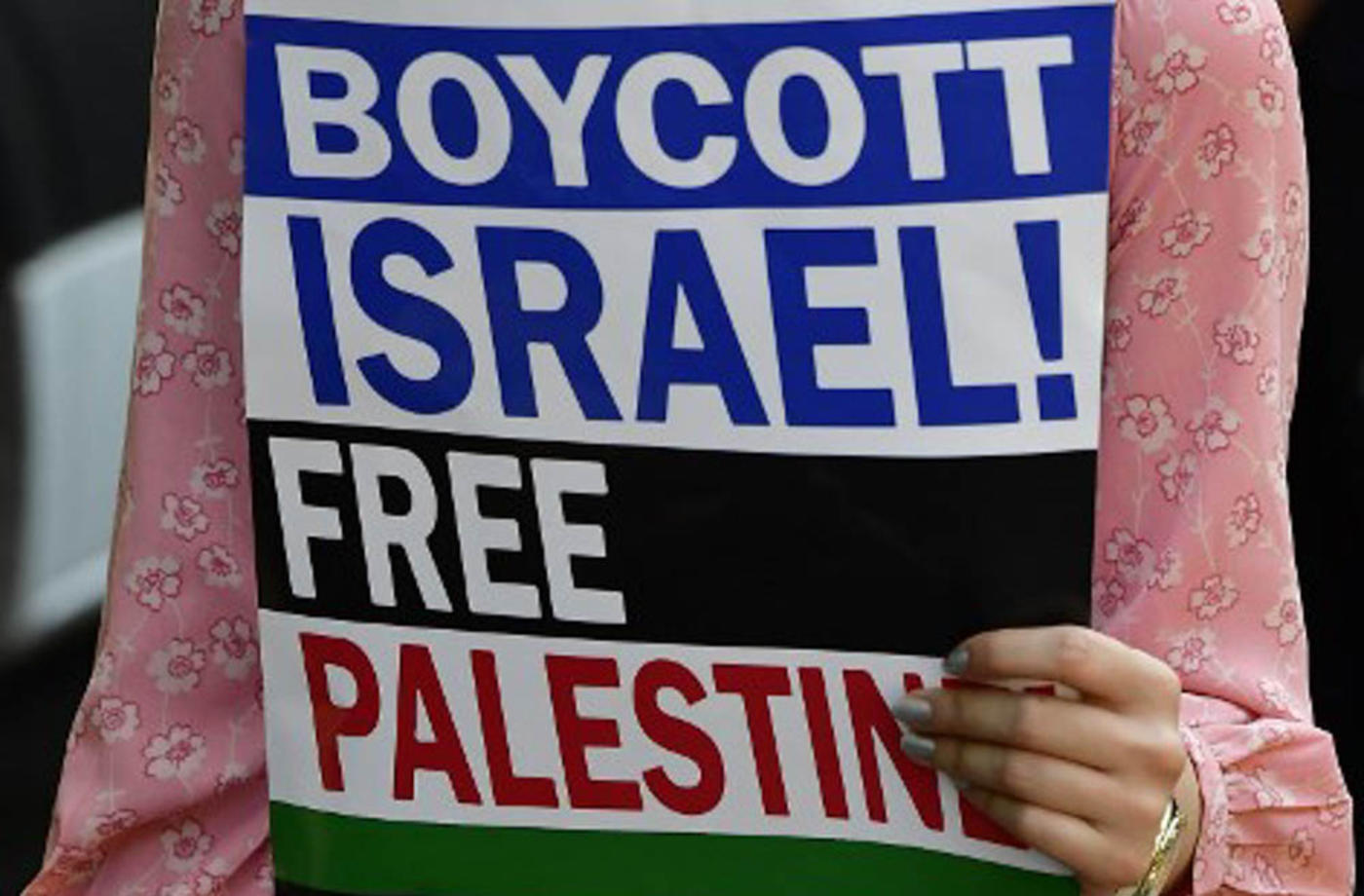 With Israel officially enshrining apartheid with its newly passed nation-state law, the Boycott, Divestment and Sanctions (BDS) movement was boosted once again as the most viable grassroots strategy to end Israel’s violation of international law.  As Professor Richard Falk put it: "If BDS continues to gain momentum around the world, and especially in the West, it will strengthen the will of governments to do the right thing, and gain sufficient momentum to shake the foundations of the Zionist insistence on a Jewish state in what is still essentially a non-Jewish society."

Meanwhile, there is renewed discussion in the West around whether it is still relevant to boycott only products from the settlements or all Israeli products. After all, the new law affirms that: "The state views the development of Jewish settlement as a national value and will act to encourage and promote its establishment and consolidation."

The distinction between settlement products and products from "Israel proper," however, is one that only functions in a context where such products are indeed available to the consumer. In Arab countries that are implementing the Arab League boycott, the criteria have always been different.

I was directly aware of that when I recently attended a presentation by Swedish activist Benjamin Ladraa at Dar El Nimer in Beirut, in which he urged everyone to do everything within their power to bring attention to the plight of the Palestinians. As I watched him using a Hewlett-Packard laptop to project his PowerPoint slides, I was reminded of the difference in the criteria between the BDS movement in the US, where I reside, and the boycott movement in Lebanon and the Arab world generally.

Hewlett-Packard is one of the main targets of the global BDS movement for its complicity in Israel’s apartheid policies. Those of us in the US who have an HP laptop or printer - and we are many - generally post a sticker on it saying: "This is my last HP," not only to express our disapproval of the company’s policies, but also to start conversations about solidarity with Palestine.

At the Beirut event I attended, there was no qualification of the use of this hardware. Ladraa spoke of his long trek from his hometown in Sweden, through a dozen countries, into Lebanon, saying the goal was to initiate conversations about Palestine with everyone who saw him pushing his stroller and very large Palestinian flag.

He projected photos of his journey, regularly documented on social media, and stressed that he firmly believed one must do everything within one's power to bring about justice. All the while, he was using a computer made by a company associated with the oppression of Palestinians.

During the Q&A session that followed, I broached the question of BDS, which Ladraa had not mentioned - only to be told by another audience member that the criteria I cited do not apply in Lebanon.

Of course, this does not mean there is no vibrant Palestine solidarity movement in Lebanon, which has secured a number of significant boycott victories - including, most recently, getting Colombian star Shakira to cancel her scheduled performance in Israel. Most of these victories are cultural boycott victories, rather than consumer boycott initiatives, as Lebanon participates in the broader Arab League boycott of Israel.

This means that few, if any, Israeli products are available in Lebanon - and if such products are to be found, they are illegal.

In Egypt, as indeed in Lebanon, the anti-normalisation movement, with its stricter criteria than the global BDS movement, has proven to be a fertile space of resistance and solidarity with Palestine

The Lebanese activists who appealed to Shakira to cancel her Tel Aviv concert, originally scheduled for this month, used the official Lebanese ban to argue that she would be breaking the law by appearing in Beirut a few days after having performed in Israel. Obviously, there is no US law banning anyone from entering the US after visiting Israel; instead, there is intense lobbying to criminalise the boycott movement itself.

Prior to Shakira's cancellation, the Beirut-based Campaign to Boycott Supporters of Israel had also stopped the screening of French-Lebanese director Ziad Doueiri's film, The Attack, filmed in part in Tel Aviv - but not his more recent movie, The Insult, about the early years of the Lebanese Civil War. The Insult is revisionist history that is highly offensive to Palestinians, and Doueiri has made many statements against BDS - but according to the Lebanese organisers' criteria, contents and ideology are not determining factors behind a call to boycott, whereas filming in Israel - direct cooperation with Israelis - certainly is.

The Campaign to Boycott Supporters of Israel in Lebanon was founded in 2002, three years before the Palestinian call for BDS was issued. The same group of Lebanese activists had also successfully rallied to stop the screening of the blockbuster Wonder Woman, which stars Israeli actor Gal Gadot in the lead role.

In this case, too, the criteria used by the Lebanese organisers, while firmly rooted in the Arab boycott principles, differed from those issued by the Palestinian Campaign for the Academic and Cultural Boycott of Israel (PACBI).

The global BDS criteria, as issued by the BDS National Committee, are clear about not imposing a blanket, unquestioning boycott of Israeli "individuals" - so Wonder Woman was not officially a global boycott target simply because of the nationality of the lead actor. Yet, PACBI coordinated with the Lebanese activists as they rallied to have the movie banned in Lebanon, and celebrated their victory, as it later did with Shakira's cancellation of her Tel Aviv concert.

BDS organisers in the US also have close ties with Israeli activists such as Ronnie Barkan, Tali Shapiro, Simona Sharoni and others who are Israeli citizens but anti-Zionists. Some have left their country, choosing to reside in the US, while others continue to live in Israel.

Ideology, not nationality, is a critical determining factor in welcoming these individuals into the US boycott community. These same criteria, however, could be counterproductive in a country such as Egypt, where the government has long been invested in "normalisation' efforts, even as the people oppose the official acceptance of collaboration with Israel.

In Egypt, as indeed in Lebanon, the anti-normalisation movement, with its stricter criteria than the global BDS movement, has proven to be a fertile space of resistance and solidarity with Palestine. Anti-normalisation would be jeopardised if, for example, a professor at an Egyptian university invited an anti-Zionist Israeli scholar to give a talk. And the anti-Zionist Israeli scholar should be fully understanding and respectful of the fact that, until Palestinians have academic freedom, they, as privileged Israelis, should refrain from engaging in activities that contribute to normalisation.

An act of solidarity

Ultimately, the power of boycott is that it is an act of solidarity in everyone's reach, which also takes into consideration the immediate context within which an activist operates. In Arab countries where the government officially considers Israel an enemy state, even as it establishes economic, business and academic ties with representatives of that state, anti-normalisation efforts are of the utmost importance in denouncing government corruption and showing solidarity with dispossessed Palestinians.

In the US, which supports Israel financially, politically and ideologically, stressing the "shared values" between the two countries, the BDS movement must aim to sever the overt ties between the US and Israel, exposing the latter as the racist, settler-colonial regime it is - an identity it shares with the US.

As a movement that exposes, challenges and organises to dismantle racism, BDS can take many forms, so long as these steer clear of racism itself. For Palestine supporters who live in Arab countries, this entails boycotting Israeli individuals, but not all Jews - and indeed, we see that distinction made when Arab organisers invite speakers such as Jewish-American Norman Finkelstein, but not, say, Israeli dissenters such as members of Breaking the Silence.

In the US, anti-Zionist Israelis play a critical role in the struggle against state-sanctioned disenfranchisement of Palestinians. This flexibility allows us to optimise our organising, guided by a vision of justice and unshackled by rigid criteria that do not work in all contexts.

Ultimately, without losing sight of our common goal of justice for Palestinians, we must negotiate the local context in a transnational struggle that unites justice-lovers everywhere. Even as our immediate targets may differ, we can coordinate and celebrate each other's success, from Beirut to the US.

Photo: A protester holds a sign promoting BDS on 9 June 2018 in Berlin (AFP) Occupation
I call upon Ireland to vote for justice and ban Israeli settlements goods from its markets
Fr. Manuel Musallam