Steven Zhou
As successful as the Liberals have been in shifting rhetoric away from anti-Muslim themes, Canada's reality remains much the same A sea change in Canada’s international image started taking place, however gradually, when the Liberal Party of Canada won the federal election last October. This victory ended the decade-long reign of Stephen Harper’s right-wing Conservative Party, whose security policies were centred on the threat of Muslim extremism, a danger that animated the government’s public safety outlook.

With #RealChange as their campaign slogan, the Liberals marketed themselves as the reform party, and they’ve lived up to that moniker in many ways. Given the Conservatives’ commitment to ideological rigidity and parochialism, no party that takes over from them will ever be able to immediately wipe the slate clean. This is especially true for national security issues, which the Conservatives dominated by pushing through large omnibus bills (they enjoyed a parliamentary majority) that expanded policing and surveillance tactics. So the Liberals had a tough task ahead of them, as the party that was going to rebalance Canada’s security policy, as well as its foreign affairs in the Middle East. But one wouldn’t know this from the Liberal’s overall rhetoric.

Prime Minister Justin Trudeau, unlike Harper, doesn’t go on national television to claim that “radical Islamicism” is Canada’s greatest existential enemy. And thanks to his progressive appeal and international popularity (particularly in contrast to the advent of Donald Trump south of the border), Canadians, along with the world, seemed ready to adjust to a new reality, one that doesn’t seek to antagonise Muslims, and for which the Middle East isn’t just a cesspool of extremist evil to be bombed year after year.

And so, as the spring and summer of 2016 rolled by, it seemed to almost everyone that Harper’s Canada had long been relegated to the margins of a new sociopolitical landscape. It isn’t just a change in government and policy that has taken place, but a complete sea change in the culture of Canadian politics, which is moving away from a strict, ideological relationship with the Middle East and Muslims. In contrast to the rightward shift that the United States seems to be undergoing, Canada, led by Trudeau and his cabinet, is headed into the other direction in a much less partisan way.

But all that is just a matter of image. As successful as the Liberals have been when it comes to shifting national rhetoric away from security-heavy or anti-Muslim themes, the reality of Canada, inside and outside of Ottawa, remains much the same. Again, the truth is that Harper’s decade-long legacy of “small government” and (some would say paradoxically) heavy-handed national security is a reality that continues to animate much of Canada’s political apparatus. And just because Trudeau’s office isn’t interested in making enemies out of the Muslims, it doesn’t then follow that all Canadian institutions will simply follow suit.

The cottage industry that has grown out of Canada’s paranoid post-9/11 culture hasn’t collapsed along with the Tory administration. Just as Donald Trump and the Republican Party has given a platform to some of the least savory fringes of the American right, the success and power of Stephen Harper helped cultivate a self-sustaining subculture of anti-Muslim paranoia. Examples are of course numerous and often self-contradictory.

The overarching similarity that connects a growing network of studies, position papers, and media articles is the commitment to the assumption or idea that a vast network of Islamic extremism lies just below the surface of Canadian society, while law enforcement, civil society, and the government itself are all being duped.

Take a recent report by an independent publishing house called “Second Star Publishing” by security analysts Thomas Quiggin and Saied Shoaaib called “Lovers of Death?” The report basically concludes that extremist literature is systematically procured and distributed in many of Canada’s major mosques and religious centres, which means that such locations are a hotbed for radicalisation and extremist thought.

Despite not being peer-reviewed by any other recognised institution, the report received national press coverage. Its methodology consists mainly of going to mosque libraries to take photographs of the literature there, and analyzing the volumes. Neither of the co-authors are theologians of any sort, and the report uses the following type of observation as evidence of their conclusions:

“Many of those present during the visits to the libraries seemed sullen and sometimes angry. The traditional greetings of friendship were absent. This is consistent with the increasing general angriness of Islamist/extremist views being advanced in some local mosques.”

Sahih al-Bukhari, a canonic collection of Prophetic sayings and traditions by Muhammad, is cited as extremist literature, while the famous Al-Azhar University of Egypt is observed as an “extremist organization.” Such conclusions are the equivalent of saying that pedophilia inside the Catholic Church is encouraged and facilitated by the teachings of St. Thomas Aquinas and the holy catechisms.

Moreover, the report doesn’t seem to care that its findings contradict a major study conducted by Canada’s intelligence agency, CSIS, in 2010-211, which concludes that mainstream mosques and Islamic centres are not responsible for the radicalisation of some Canadian Muslims.

Fear is the only pressure

And yet the enduring culture of post-9/11 paranoia is more than capacious enough to offer such findings a place within the national discourse. The subsequent effects of unfounded observations and conclusions contribute to corresponding discussions that occur in the policy realm. And despite less emphasis on the Middle East by the Liberal Party when it comes to foreign policy, the politics of national security is still mired in the legacy that Stephen Harper left Canada.

In addition to dealing armaments to Saudi Arabia and doubling down on its support for the state of Israel, the Liberal administration is maintaining the status quo when it comes to domestic national security because it’s under no major pressure to carry out any actual policy reforms. Canadians are as affected by the sinister images of Daesh as many other Western populations, while attacks in Paris, Orlando, Nice, and Istanbul, among other places, have only helped to increase a sense of vulnerability.

These systemic circumstances, both inside and outside of the Canadian political system, indicate a much more familiar reality than the new and improved image that the Liberal Party’s marketing implies. The political situations within which the Liberals find themselves have not changed very much from the Harper days as far as security and foreign policy is concerned. The fear of terrorism and “Islamofascism” is just as real as it was ten years ago, as is the political need to exploit such fear for gains in electoral politics as well as outside of it.

- Steven Zhou is a regular contributor to Al Jazeera English, The American Conservative, Ricochet Media and Muftah, among other outlets. He also writes a regular column at The Islamic Monthly, where he's an associate editor. Follow him on Twitter @stevenzzhou

The views expressed in this article belong to the author and do not necessarily reflect the editorial policy of Middle East Eye.
Photo: File photo of Canadian Prime Minister Justin Trudeau (AFP)
This article is available in French on Middle East Eye French edition. 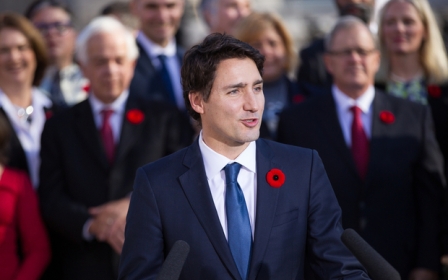