In cold blood: Elor Azaria and the case for killing Palestinians

Meron Rapoport
An ex-general's testimony that Palestinians suspected of terrorism must be killed, threat or not, could finally nail the myth of Israel's moral army 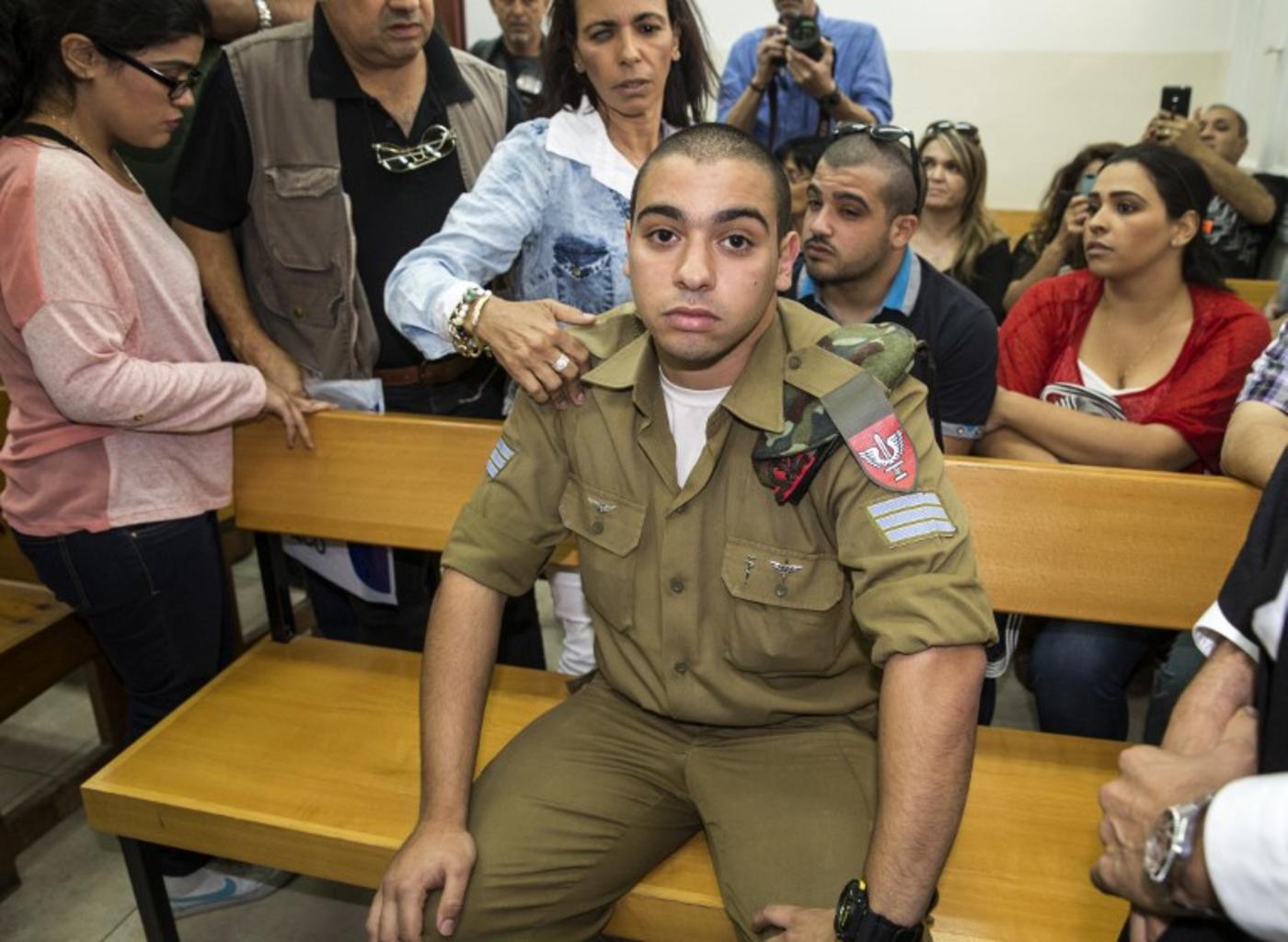 Uzi Dayan is certainly an integral part of the old Zionist-Israeli elite.

He is a nephew of the legendary – or notorious –  General Moshe Dayan. He is a great fan of modern Hebrew poetry. He served in a commando unit in the army, and was the commander of the Central Front which includes the West Bank. He headed the National Security Council and now heads the National Lottery, a government institution which allocates billions of dollars to social, educational and cultural issues.

While trying to prove that Azaria pulled the trigger because he felt threatened, the defense, at the same time, is doing its best to show that his conduct is the norm

Last week, Dayan lent all his prestige to the defence of Elor Azaria, the soldier indicted for killing Abed al-Fatah al-Sharif this March while he lay wounded and unarmed on the ground in Hebron after allegedly trying to stab a soldier.

"I ordered to kill (Palestinian) terrorists just because they were terrorists, regardless of their (medical) condition," testified Dayan before the military court. "Do terrorists deserve to die?" added Dayan. "The answer is yes".

In an interview to a local radio station several weeks ago, Dayan was even more explicit. He recalled an incident in Tarkumia, on in the southern part of the West Bank, where five Palestinian were killed by Israeli soldiers.

"They were not terrorists. They were not even illegal infiltrators. They were coming back from work in Israel and there was a misunderstanding," remembered Dayan. But he, as commander of the area, decided not to prosecute the soldiers. Azaria's case, in his view, is much less grave and, therefore, he should not be prosecuted at all.

A reprimand at most

Dayan's testimony was by no mean an exception. It fits the line of defence adopted by Azaria's lawyers from the early stages of this affair: while trying to prove that Azaria pulled the trigger not out of a desire to kill al-Sharif, but because he felt threatened, the defence, at the same time, is doing its best to show that Azaria's conduct – shooting a wounded Palestinian suspected of "terrorism" – is the norm among Israeli soldiers in the West Bank. Dayan's testimony was meant to stress this point.

Azaria himself testified that while he served in Hebron, his fellow soldiers had bitten a handcuffed Palestinian with the consent of their commanders. Other retired generals have agreed to testify on Azaria's behalf, claiming incidents such as the killing of al-Sharif are part of military routine and should not be brought to trial. At most, goes this line of argument, Azaria should have been reprimanded for not obeying his commanders.

The defence has even gone as far as asking to summon Israel Shumer, an Israeli colonel who shot and killed an unarmed Palestinian youngster, Mohammed al-Kasbeh, in July 2015 near Ramallah, for testimony.

Although al-Kasbeh was shot in the back while running away from an incident where Shumer's car was hit by stones, Shumer was not even indicted. Azaria's lawyers want to show that their client acted according to the norm set by Colonel Shumer and other senior Israeli commanders.

What makes this line of defence even more intriguing is the fact that Azaria has become the champion of the many Israeli Jews, mainly from the right-wing, but not alone.

It's as if Azaria's defence team, sponsored with crowd-funding raised by Israeli right-wing activists, has become the legal arm of Breaking the Silence

A recent poll conducted by the respected Peace Index at Tel Aviv University shows that 65 percent of the Jewish respondents think that Azaria acted out of self-defence and should be acquitted. Forty seven percent agreed that any Palestinian responsible for an attack on Israelis should be killed on the spot.

These kind of statements strangely resemble claims made for years by Breaking the Silence and other Israeli and Palestinian human rights organisations according to which Israeli security forces are often responsible for extrajudicial killings of Palestinian citizens when they no longer posed a threat to them.

Yet there is one fundamental difference: "Azaria joins soldiers who broke the silence," wrote Yulie Novak, the head of this organisation, recently.

According to Michael Sfard, a leading Israeli human rights lawyer, this is exactly the challenge which Azaria's trial puts in front of the Israeli society. The popular support given to Azaria and the readiness of retired generals such as Dayan and the like to defend him reflect just how far Israeli society has gone as it now debates, seriously, whether it is right or wrong to kill a wounded Palestinian attacker, Sfard told Middle East Eye.

Yet at the same time, he said, it is not evident that the same society is ready to "cross the Rubicon" and pay the price for officially legitimising the killing of unarmed civilians.

"Israel is much trained in depicting its army as the most moral in the world," said Sfard, "so it is very well-prepared to overcome the slight embarrassment caused by Dayan's testimony."

While the popular mood is largely in favour of Azaria, there are strong forces inside the Israeli military apparatus who insist on bringing him to court on charges of manslaughter, from the head of the chief of staff General Gadi Eizenkot downwards. Even the current defence minister, Avigdor Lieberman, who strongly supported Azaria while he was still in the opposition, now sides with the decision to indict him.

This military and legal apparatus, says Sfard, understands clearly what is at stake. The main reason why Israeli officials have not yet been brought to trial before the International Court of Justice in The Hague, according to Sfard, is the claim that Israel has a functioning legal system which is able to investigate, indict and convict alleged war criminals.

For now, claimed Sfard, the international community is keen on believing this paradigm. Yet if Azaria is set free not because he is found not guilty, but because an Israeli court decides that killing a wounded man lying on the ground is not a crime because the victim is Palestinian, then this shield might crack.

Paradoxically enough, Azaria's defence team, with the help of distinguished retired generals, is trying to do just that. It is yet to be seen whether they will succeed.

- Meron Rapoport is an Israeli journalist and writer, winner of the Napoli International Prize for Journalism for a inquiry about the stealing of olive trees from their Palestinian owners. He is a former head of the News Department of Haaertz, and is now an independent journalist.

Photo: Israeli soldier Elor Azaria, who was caught on video shooting a wounded Palestinian assailant in the head as he lay on the ground, during an April 2016 hearing at a military appeals court in Tel Aviv (AFP)