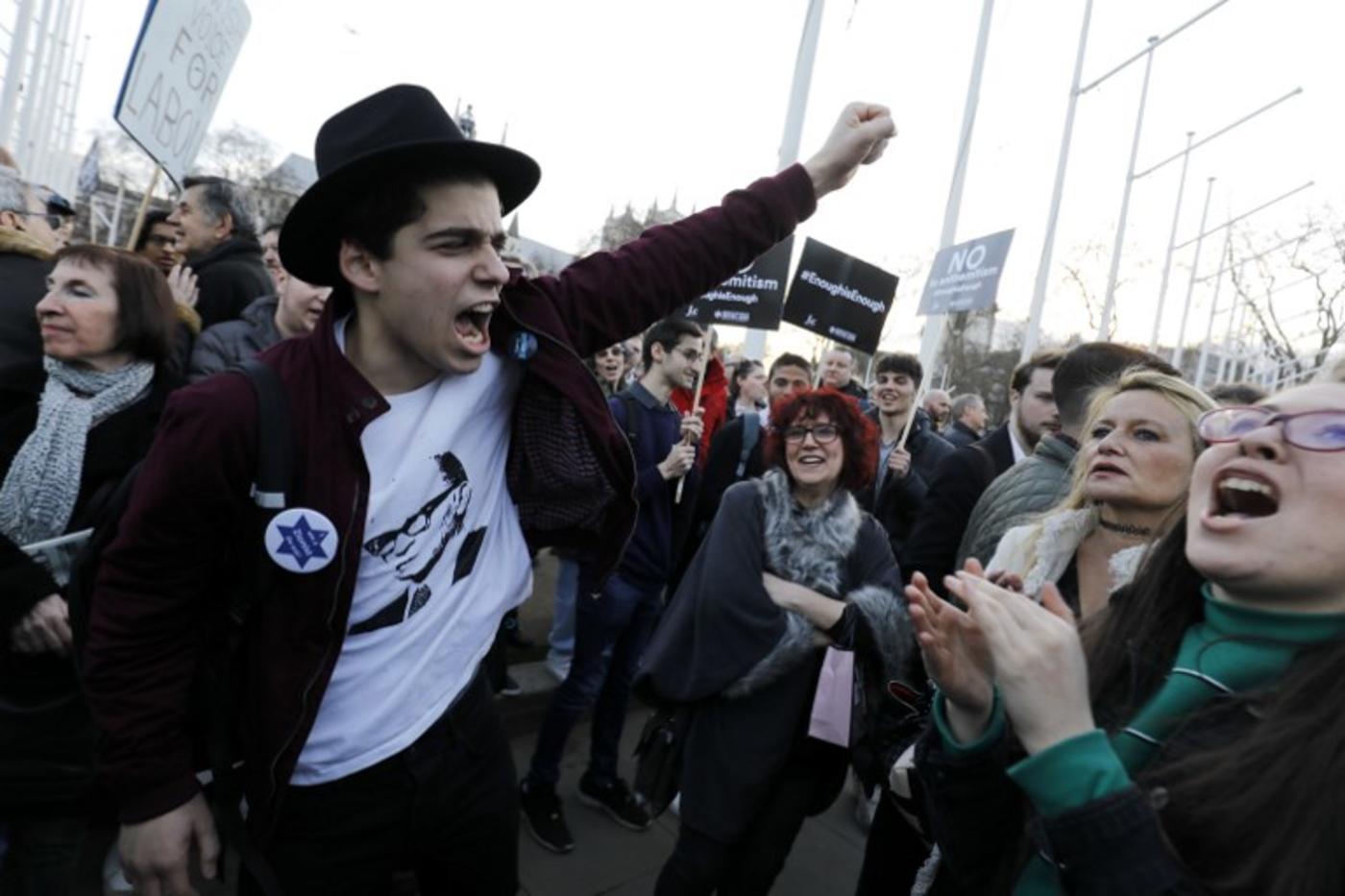 Recent publications about anti-Semitism - such as the excellent volume On Anti-Semitism by Jewish Voices for Peace - say that although every decent person opposes the phenomenon, there is no unified definition of it.

This philosophical, dare I say ontological, discussion is not very helpful for engaging with the recent row about alleged anti-Semitism in the Labour Party. Within the context of this particular debate, there is a handy definition that we all can use. It is clear, common, sensible and effective.

Hating Jews for who they are is anti-Semitism. It does not differ from the definition of modern-day racism. Any hate based on race, religion, colour or gender that leads to bigoted attitudes from below, and discriminatory, at times genocidal, policies from above, is racism.

There are six million Jews living today in historic Palestine next to six million Palestinians. Any generalisation about either community is racist, and since both communities are Semitic, such racism is anti-Semitism.

The role of the pro-Israel lobby

However, condemning people for their actions, whether they happen to be Jews or Palestinians, as opposed to their identity, is not anti-Semitism. This is also true for ideologies which are racist.

What is appalling is to use the accusation of anti-Semitism to cover up Britain’s continued tacit, and at times direct, assistance to the dispossession of Palestinians

Condemning Zionism as a settler-colonial ideology that has led to the dispossession of half of the Palestinian population from their homeland, and for the current discriminatory and brutal Israeli policies against those who remain, is not anti-Semitism. It is in fact anti-racism.

The latest row about anti-Semitism, which is the culmination of a series of allegations and counter-allegations triggered by the election - for the first time since the 1917 Balfour Declaration - of a Labour leader who sympathises with the Palestinian struggle for justice and independence, illustrates well the difference between condemning an action and condemning an identity.

Since Jeremy Corbyn’s election, the pro-Israel lobby staff, as has also been exposed in the excellent Al Jazeera documentary The Lobby, has tirelessly gone over every tweet, Facebook post and speech he made since he began his life as a politician, in order to trash him as an anti-Semite.

It was not easy to find proof for this, as Corbyn is categorically against all forms of racism, including anti-Semitism. However, finally they discovered that he had supported, in the name of freedom of expression, a mural that could be interpreted as anti-Semitic (and was declared to be so, by some reports, by the artist).

As Corbyn himself admitted at the time, he should have studied the mural for a bit longer. He did not. He apologised. Case closed.

He was elected by young people across Britain because of his human fallibility and not because he was yet another shallow, spineless, superhuman politician who has never admitted to making a mistake.

Another Labour politician, Christine Shawcroft, resigned after she lent her support to Alan Bull, a council candidate due to stand in Peterborough who she thought was unfairly accused of being a Holocaust denier. The candidate claimed the allegations were based on content that had been doctored and taken out of context.

How to silence a critic

The insignificant slip and Corbyn’s ill-informed support, if that is what it was, were enough for a show of force and unity by the organised Jewish community, whose activists staged a demonstration in front of parliament. Along with banners likening the Labour Party to Nazis, protesters waved Israeli flags.

The flags are the key issue here, not Corbyn’s support for the mural nor Shawcroft’s endorsement of Martin Bull. This was a demonstration against Corbyn’s pro-Palestinian stance, not against anti-Semitism.

Corbyn is not an anti-Semite and the Labour Party, until his election, was a pro-Israeli bastion. Therefore, the timing and disproportionate response to the mural issue is, to say the least, bizarre - or not.

It is actually not so strange, if you understand the machinations of the Zionist lobby in the UK. The demonstration was staged at the start of a week in which Israel used lethal force against a peaceful march by Palestinians in the Gaza Strip, killing 17 Palestinians and wounding hundreds more.

The Israeli flags show clearly the link between the attacks on Corbyn and his honourable and humane positions on Palestine. The dividend for the Zionist lobby in Britain was that Corbyn would be silent in the face of the new massacre in Gaza – and without him, we have very few brave politicians who would dare to utter a word in the new atmosphere of timidity.

The current politicians who run Israel have very few qualms, as we have seen, about systematically killing or arresting Palestinian children. Their allies in the Anglo-Jewish community, to their credit, are embarrassed by it. Their job of defending Israel is far more difficult nowadays, when Palestinians have clearly opted for non-violent popular resistance.

It is only a matter of time before the inhuman brutality that the Israeli army employs will be noted by public opinion, even in Britain, where the BBC and Sky News work hard to sidetrack the issue of Palestine from its reporting and discussion: both channels devoted more time to the mural than to the new Gaza massacre.

The Israel lobby would like all of us in Britain to discuss murals and latent anti-Semitism in a society where Jews have never been safer or more prosperous. Yes, there is anti-Semitism among all British parties - and much more on the right than on the left, by the way. It should be eradicated and condemned, as should any other form of racism, be it directed against Muslims or Jews in a predominantly Christian and white society.

What is appalling is to use the accusation of anti-Semitism to cover up Britain’s continued tacit, and at times direct, assistance to the dispossession of Palestinians, which began with the Balfour Declaration 100 years ago and has not stopped since.

It is deplorable to use such allegations to stifle debate on Palestine or to bring down politicians who are unwilling to toe the Israeli line.

It is not the Labour Party that is infested with anti-Semitism; it is the British media and political systems that are plagued by hypocrisy, paralysed by intimidation and ridden with hidden layers of Islamophobia and new chauvinism in the wake of Brexit.

Upon the Balfour Declaration’s centenary, all British parties should join a public inquiry commission on its legacy, rather than blowing a few missteps out of proportion either through ignorance or successful manipulation.

- Ilan Pappe is professor of history, director of the European Centre for Palestine Studies and co-director for the Exeter Centre for Ethno-Political Studies at the University of Exeter.

Photo: Members of the Jewish community protest against Britain's opposition Labour Party leader Jeremy Corbyn and alleged anti-Semitism in the party on 26 March 2018, outside Parliament in central London (AFP) 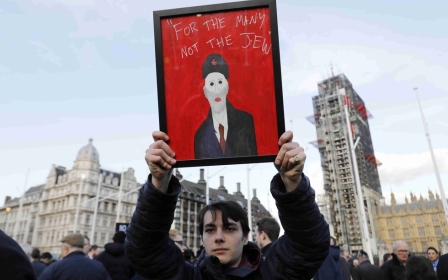 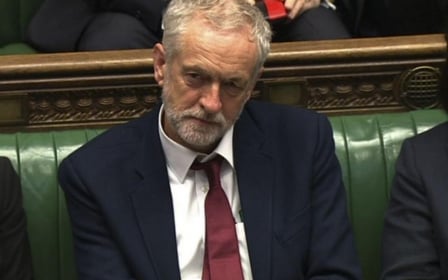