Moazzam Begg
It is now established that British spy agencies knew the man whose 'evidence' was used to make the case for the Iraq war was tortured. It is time for the whole truth about the UK's role to be told 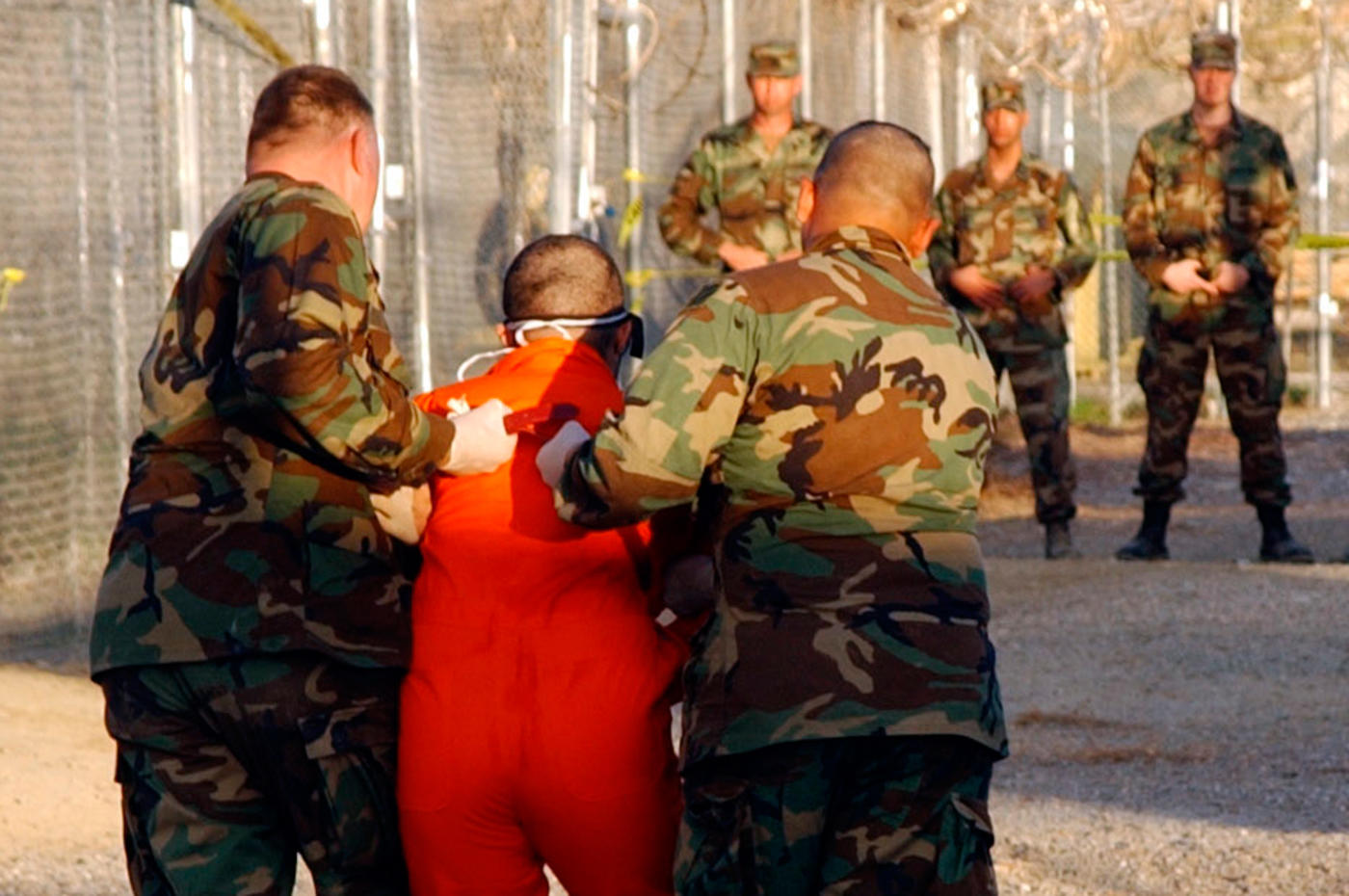 Recent revelations by Middle East Eye confirm something I’ve been saying since my release from Guantanamo: British intelligence officers knew about the abuse of Ibn al-Sheikh al-Libi, the man whose tortured testimony was used to justify the invasion of Iraq. It is my belief, however, that they must have done far more than that.

In February 2002, I was held captive by the US military at Kandahar and Bagram air bases, Afghanistan, for a year. During this time, I was taken scores of times - hooded and shackled - by US guards for interrogation. These sessions were conducted by British MI5 officers.

Working with torturers - before and after 9/11

In fact, MI5 had been present at every leg of my journey. One agent had come to my house in Birmingham in 1998 to ask me about the case of Farid Hilali, a friend who’d been detained and tortured in UAE. He’d written to me asking for help, saying that he’d been tortured in the presence of British agents. The same agent who’d asked me about Hilali reappeared to question me during my time in US custody while I was facing torture myself.

Hilali is currently in the process of seeking legal redress from the British government for complicity in his torture. Tony Blair was the British prime minister throughout the period when many of these abuses happened, and the world is yet to recover from his decisions.

I first became aware of the case of Ibn al-Sheikh Al-Libi in Bagram in May 2002. I was interrogated regularly by CIA and FBI agents and abused in ways I can never forget. My story has, of course, been well documented but it is what didn’t happen to me that is far more chilling.

The CIA told me that if I didn’t cooperate I would be sent to Syria or Egypt for questioning. They told me that one man had already been sent to Syria. I later learned that they were referring to Canadian Syrian, Maher Arar. The CIA also explained to me that Libi had literally “sat in the same chair” as me and “played games”. However, once he’d been sent to Egypt he “confessed within two days".

What exactly Al-Libi confessed to I didn’t know then but, I did learn from other prisoners that he’d been in Bagram and was taken away “alive, in a coffin".

Supplied by Britain and America: WMDs

In 2002, the US had been desperate to find a “smoking gun” that linked Iraq to al-Qaeda. They thought they’d found it with the capture of Libi - who’d allegedly once run a training camp in Afghanistan.

It is now accepted that Libi’s “confession” - that Iraqi leader Saddam Hussein was working with and supplying al-Qaeda with weapons of mass destruction (WMDs) - was entirely fabricated and extracted by President Hosni Mubarak’s Egyptian intelligence under duress before it was passed on to the US as “credible evidence".

That "evidence" was presented by US Secretary of State Colin Powell to the UN Security Council. Meanwhile, at the same time, British Prime Minister Tony Blair was telling parliament that intelligence was coming through “the entire time” that there were “unquestionably links between al-Qaeda and Iraq".

There was, understandably, some justification in the belief that Iraq still possessed chemical weapons. Britain and America had supplied Saddam Hussain with those facilities during Iraq’s eight-year war against Iran.

However, by 2003 there were no longer any WMDs in Iraq and al-Qaeda had never had a presence in the country. That only happened after and because of the invasion. That same al-Qaeda in Iraq (AQI) underwent a few transformations until it finally emerged as the Islamic State. But that’s another story.

The ‘deal in the desert’

In March 2004, Blair flew to Libya to meet with Colonel Muammar Gaddafi as part of the effort to bring him in from the cold as the latest ally in the ''war on terror".

The "deal in the desert" between Blair and the Libyan dictator included a lucrative half-billion pound gas exploration deal in Libya. In return, Gaddafi was to abandon his nuclear weapons programme and begin cooperation with the West in fighting terrorism.

Earlier this year, Prime Minister Theresa May issued an unprecedented apology to Libyan dissident, Abdel Hakim Belhaj and his wife, Fatima Boudhcar for Britain’s role in their kidnap and rendition and subsequent imprisonment and torture by the Libyan government. Exactly how Theresa May felt apologising for the actions of Blair’s government in unknown.

What is clear is MI6 head Mark Allen, under Blair’s administration, was working closely with Gaddafi’s secret service.

The consequences of this led not only to the imprisonment and virtual house arrest of Libyan dissidents in Britain but also to the extraordinary rendition of Libyans, Sami al-Saadi and Belhaj.

Meanwhile, Blair’s foreign minister Jack Straw was telling the British parliament that British involvement in rendition and torture was a “conspiracy theory".

After being taken on an odyssey of secret CIA prisons - that certainly included one at Guantanamo and other unconfirmed locations - Libi was finally transferred to Libyan authorities in 2006. The next and final years of his life were spent in the notorious Abu Salim prison, outside Tripoli. In May 2009, Libyan authorities reported that Libi had committed suicide in his cell by hanging himself.

When I visited Tripoli in 2011 after Gaddafi had been overthrown in Libya's "Arab Spring" uprising, former prisoners who had been in cells next to him told me that it was the regime that killed him. Both Saadi and Belhaj had been imprisoned in nearby cells.

Prisoners told me that Libi had received visits by “western agencies” in Abu Salim. That may well have been the CIA but it could have included MI6.

It is clear too that the Blair government had a good working relationship with Libyan intelligence. Communications between Mark Allen and Libyan intelligence chief Moussa Koussa prove that. The former’s congratulatory note to the latter on the rendition of Belhaj as a “gift” is now the journalistic stuff of legend. Indeed, Britain under Blair was signing Memoranda of Understanding (MOUs), using secret evidence, in order to deport dissidents to countries known to practice torture. Libya was among them.

Following the publications of the US Senate's report on the CIA torture programme and Britain’s own Intelligence and Security Committee (ISC) on British agents’ collusion in torture and other human rights violations, it is time that Tony Blair’s government’s role in all of this is laid bare.

Despite the findings of the Chilcot report which examined Britain’s role in Iraq, no mention or reference was made to the case of Libi. That is an astounding and deliberate omission. MI6 knew about Libi from the outset and failed to intervene against his abuse. But what else did they do - or not do?

It is inconceivable to me British intelligence would not have taken part in his interrogation.

The principles of the Nuremburg war crimes tribunals after World War Two established that you don’t prosecute rank and file soldiers until their leaders have been held to account.

Currently, despite the multitude of war crimes that include an illegal invasion, the deaths of tens of thousands, complicity in false imprisonment, kidnap, torture and rendition, there is no suggestion that anyone will be held to account, let alone the architects.

But until there is meaningful accountability for those who have taken part in the destruction of so many lives, the words justice, freedom and human rights will remain meaningless for the victims and survivors.

Photo: In this photo released 18 January 2002 by the Department of Defense, US Army military police escort a detainee to his cell in Camp X-Ray at the US Naval Base at Guantanamo Bay, Cuba (AFP)