Four decades on: What is left of the Islamic revolution in Iran?

Mahan Abedin
Despite economic grievances, protest movements and broader social fissures, both the Islamic Republic's popular base and the establishment appear united in the face of mortal threats 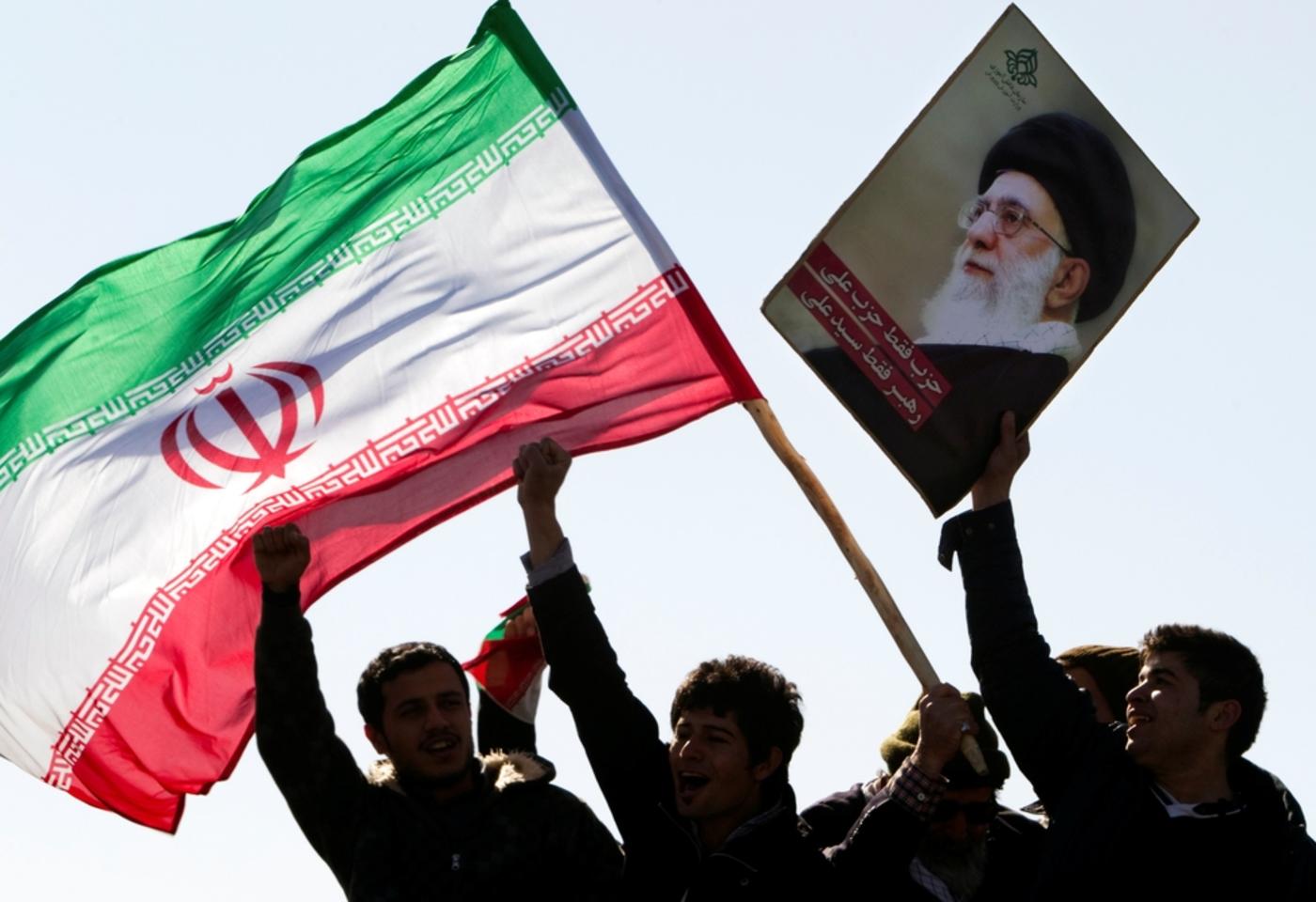 Sunday marked the 39th anniversary of the Iranian revolution which toppled the Shah and ushered in the Islamic Republic. While every year the event is held with great fanfare, this year's anniversary is particularly sensitive as it follows on the heels of nationwide protests which gripped the country a few weeks back.

The priority this year was to mobilise as many people as possible for the big 11 February march in Tehran. This followed a call by major national organisations urging their immediate constituents – and the broader public – to turn up for the big rally on Sunday.

But as the revolution enters its fourth decade the establishment is faced with multiple political, socio-economic and cultural issues, some of which – particularly in the socio-economic sphere – border on a fully fledged crisis.

A confluence of crises

Apart from an energised protest movement, driven in large part by economic grievances, there are broader social fissures, as demonstrated by a small but highly visible campaign against the mandatory Islamic hijab.

Despite its inherent divisions, the establishment appears to be united at least in defending the integrity of the system against its sworn enemies. Moreover, the various social and political forces which comprise the Islamic Republic's base appear to be uniting in the face of potentially mortal threats.

While the protest movement which erupted in late December was small and short-lived, nonetheless it has had a profound impact on the country's politics. Leading politicians, including President Hassan Rouhani, have come out urging the establishment to take heed of the protestors' legitimate demands.

The true nature of the protest movement is still not well understood, nor is there any consensus on its traction with the general public. The first post-protest survey of Iranian public opinion – conducted by the University of Maryland's Centre for International & Security Studies and IranPoll.com – suggests that only 16 percent of the respondents seek "fundamental" political changes.

As the revolution enters its fourth decade the establishment is faced with multiple political, socio-economic and cultural issues, some of which – particularly in the socio-economic sphere – border on full-fledged crisis

However, uncertainty over the popularity of the protest movement and its true intentions hasn't dented their impact on the political community. Specifically, the protests have touched off heated debates in the reformist camp, which stands accused by radicals - or Barandazan, or "overthrowers" as they are referred to - of demonising the protests.

Most reformist leaders, including former president Mohammad Khatami, and leading reformist ideologues, including Mostafa Tajzadeh and Abbas Abdi, have taken strong stands against public disorder and rioting, while acknowledging some of the "legitimate" grievances of the protestors.

This position is fully reflected in a statement issued by 16 prominent reformists, including Tajzadeh, which sets out the economic and political context of the protests, while taking care not to endorse them.

But another faction among reformists, notably the so-called Green Movement which led the last major protests back in 2009 following a disputed presidential election, has taken a markedly different line. While not endorsing the latest protests, this faction is intent on joining it – albeit indirectly – by applying even greater pressure on the establishment.

This confrontational approach is evident in a highly strident letter addressed to Supreme Leader Ayatollah Ali Khamenei by Mehdi Karroubi, one of the leaders of the Green Movement currently languishing under house arrest.

In his open letter Karroubi firmly and unequivocally blames Khamenei for the policies of the past three decades that have allegedly directly contributed to the country's multiple crises.

The protests may have been prompted in large measure by economic grievances, notably President Rouhani's austerity-driven policies, but they were striking nonetheless by their ferocity and uncompromising slogans directed not just at the establishment, but also at the Islamic Republic's political community.

The protests have coincided with a movement of civil disobedience aimed at challenging the mandatory Islamic hijab. Known as "White Wednesday", the movement consists of women taking off their headscarves in public, in full defiance of the law, with a view to undermining one of the cardinal features of the Islamic Republic.

Painted as primarily a socio-cultural movement, and one centred on demands for choice and diversity, White Wednesday is in fact an inherently political movement. It is a form of identity politics which challenges the deepest values and identity of the Islamic system.

Moreover, some of the videos posted on social media (taken by the campaigning women themselves) take aim at broader political issues, notably foreign policy and Iran's involvement in the Syria conflict.

The focus on identity politics has two immediate consequences; first it is set to polarise the political environment still further. Second, it will prompt greater systemic cohesion

While White Wednesday appears to have a relatively narrow base – with at most a few hundred videos posted to social media – it has been sufficiently high profile to impact official discourse on the issue.

Notably it prompted President Rouhani – who appears to be keen on capitalising on the various protest movements – to release a three-year old report on the hijab by the respected Centre for Strategic Studies. The detailed report suggests that nearly half of the population is opposed to mandatory hijab.

The president's opportunistic approach to the issue is brought into sharp relief by the release of a video in which Rouhani boasts of playing a central role in making hijab obligatory in the early years of the revolution. Filmed in 2002, Rouhani recounts stories of how he set about introducing mandatory hijab in military centres in the immediate aftermath of the revolution.

In yet another display of opportunism, in his speech yesterday Rouhani held out the prospect of holding a referendum to settle big political issues. This appears to be a concession – albeit probably a disingenuous one - to some of the protestors who were demanding a referendum, presumably to settle the fate of the Islamic Republic.

The focus on identity politics has two immediate consequences. First and foremost, it is set to polarise the political environment still further. Second, it will prompt greater systemic cohesion, as the various factions come together to meet a threat that is directed at the very essence of the Islamic system.

This cohesion was in full display on 1 February, the first day of Daheyeh Fajr or "Decade of Dawn", commemorating the late Ayatollah Khomeini's return to Iran on 1 February 1979 which culminated in the victory of the revolution 10 days later.

It's not all about the supreme leader: How Iran's next president could shape foreign policy
Maysam Behravesh
Read More »

The inaugural speech of Daheyeh Fajr is all-important as it sets the scene for the 10-day commemoration.

This year's inaugural speech was delivered by one Seyed Ali Khomeini, a grandson of the late Ayatollah Khomeini. Against a backdrop of protests and widespread political tension, the young Khomeini came out in strong support of the supreme leader, Ayatollah Khamenei.

This is important, as the Khomeini clan is often identified with the reformist wing of the establishment, and tends to be critical of the current leadership.

At any rate, the current trajectory suggests an erosion of the reformist/conservative boundary in Iranian politics, only to be replaced by a much more contentious divide between Islamic Republic loyalists and Barandazan or "overthrowers".

2018 is set to be a tense and possibly eventful year in Iran.

Photo: Demonstrators wave Iran's flag and hold up a picture of supreme leader Ayatollah Ali Khamenei during a ceremony to mark the 33rd anniversary of the Islamic Revolution, in Tehran's Azadi square February 11, 2012 (REUTERS) 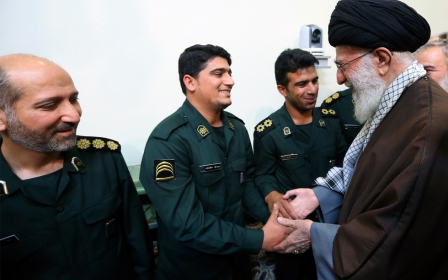 Iran nuclear
Iran and Trump: What his victory means for the Revolutionary Guard
Shahir Shahidsaless Inside Iran
It's not all about the supreme leader: How Iran's next president could shape foreign policy
Maysam Behravesh