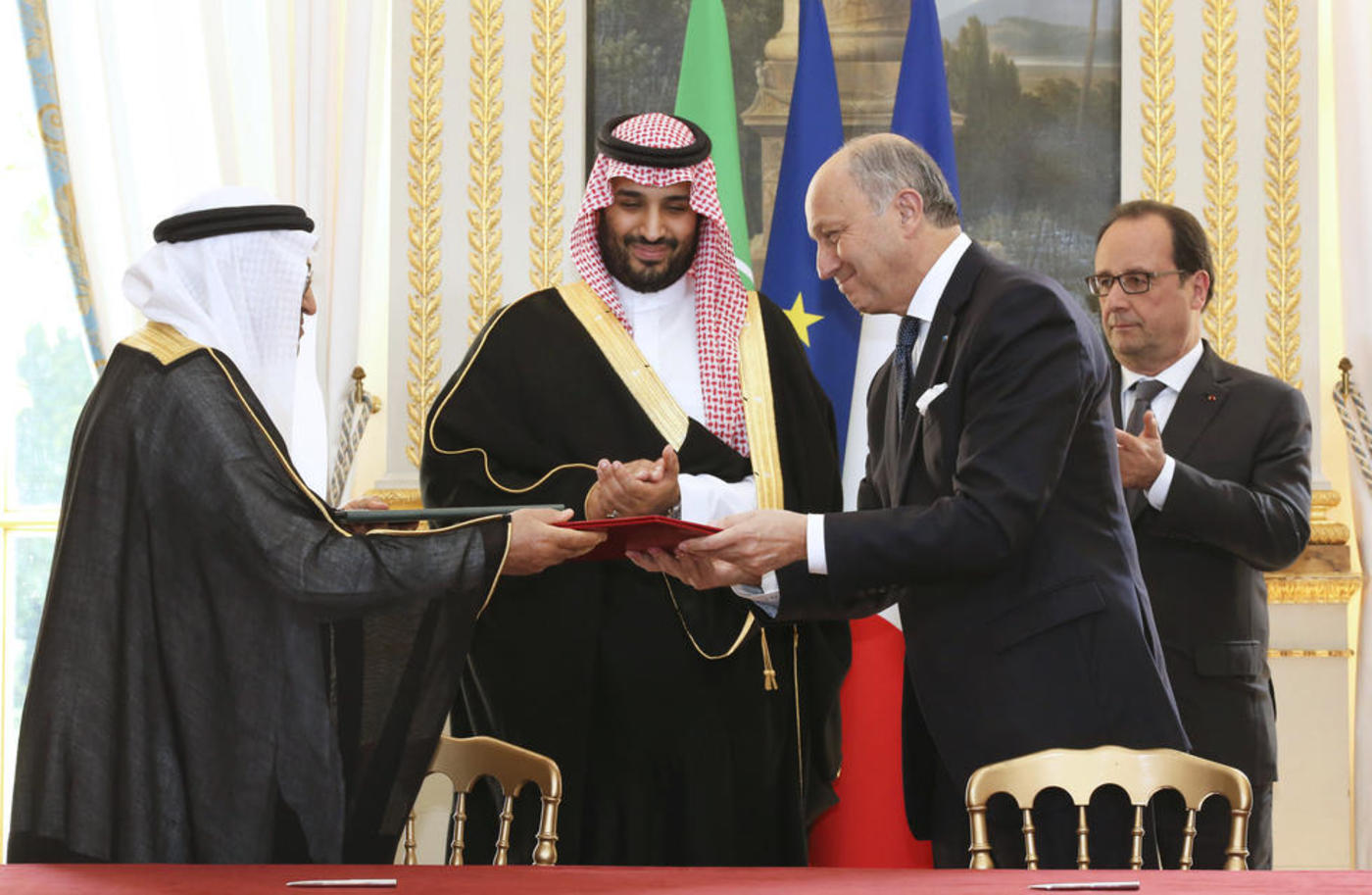 The visit to Paris this week of Saudi Arabia's Deputy Crown Prince Mohammed bin Salman, and the signing of an estimated $12 billion worth of economic and military deals, highlights France's deepening relations with the Gulf monarchies.

In May, President Francois Hollande became the first ever Western leader to attend a Gulf Cooperation Council (GCC) leaders summit, and, over the last six months alone, France has inked a $3 billion deal with Riyadh to supply weapons to the Lebanese army, a $7 billion dollar deal to sell Rafale jets to Qatar and a $5 billion deal to sell the same planes to Egypt, facilitated by strong political and possible financial support from the United Arab Emirates.

France’s drawing nearer to the Gulf may appear a boon for Paris’s relevance in the Middle East; a "filling of the void" created by Gulf frustration with the US’s perceived soft line on Iran. But in fact, reality points the other way: France's new proximity to the Gulf states means increasingly unconditional support for Gulf regional policies. Hollande’s ability to wield independent influence has been weakened.

France is backing the Saudi-led military operation in Yemen despite the fact that other Western states, notably the US, are wary of its many pitfalls – security, political and humanitarian – and are pressing for an exit strategy.

An alternative to Washington

Paris is being used by the Gulf states to secure desired Western political cover for increasingly antagonistic regional positions. By courting France, the Gulf sends the message to Washington that it can turn elsewhere for support.

Clearly French military hardware is useful to the Gulf states, helping them diversify their security portfolios at a time of unprecedented regional upheaval. Rafale jets will be valuable additions to Gulf states that are now actively undertaking combat operations across the region, whether in Yemen, Libya or as part of the anti-ISIS coalition. But ultimately, and despite current frustrations, the Gulf states continue to look to the US for their security umbrella and to provide key military support, and it is this political dynamic that is driving deepening engagement with Paris.

France is of course gaining notable commercial reward for this support. With Europe's economic situation as weak as ever, Hollande has placed France at the front of the pack - often to the envy of other Europeans such as the UK - in terms of reaping the material gains of Gulf unease, their desire for some Western backing and their willingness to spend to unprecedented levels.

Whether it be by offering full support for the Yemen intervention or taking a more hard line position on the terms being offered to Iran as part of the nuclear negotiations, Paris has succeeded in presenting itself as the Gulf's closest Western ally, and has been rewarded accordingly.

In some cases such as on Iran, and on Syria, where Paris has lined up alongside the Gulf in calling for more assertive action to remove Bashar al-Assad, this has not necessarily involved a significant departure from France's own analytical reading of the situation (though there appear to be some concerns in Paris about the willingness of Gulf states to work with the al-Qaeda affiliated Jabhat al-Nusra group in Syria).

In other areas, such as the decision to sell fighter jets to the Egyptian government, taking the lead on European re-legitimisation of the government of Abdel Fattah al-Sisi or the call to back the Saudi intervention in Yemen, this alignment does not necessarily hold so true, with some ongoing French concerns over the possible or likely consequences for regional stability and by extension for European and French interests.

Either way, France has been able to take these positions without incurring any significant burden of responsibility, by for instance having to initiate unilateral military steps to back its strong rhetoric or by suggesting any real willingness to ultimately block the US-brokered nuclear deal.

Much like the Gulf states, France continues to look to the US to make the decisive calls in the region, even as it takes direct advantage of American unwillingness to act as it wants. Ironically, if Washington was to respond more assertively, in line with proclaimed Gulf and French ambitions, Paris would be likely to quickly lose its newly secured privileged position with the Gulf states.

French-GCC ties are clearly mutually beneficial in many ways, but at the end of the day remain unlikely to be able to deliver a meaningful strategic partnership.

France may be gaining new commercial reward but its role as an actor with meaningful regional influence is arguably being diminished as it increasingly falls unquestioningly in line with Gulf policies, even where they are playing some role in feeding the conditions that are now fuelling new threats to European interests, whether in terms of terrorism or concerns about the huge increase in refugee inflows.

For their part the Gulf states know that, however helpful and desirable the political cover Paris provides, France will ultimately be unable and unwilling to meaningfully step up in order to help them address their core regional concerns.

- Julien Barnes-Dacey is a senior policy fellow for European Council on Foreign Relation’s Middle East & North Africa programme. Julien has worked as a journalist across the Middle East. Based in Syria from 2007 to 2010, he reported for the Wall Street Journal, the Christian Science Monitor, and the Financial Times and worked as a field producer for Channel 4 News (UK) and Al-Jazeera. Previously, he was editor of Niqash, an online Iraqi news service, and worked for the Cairo Times in Egypt from 2003 to 2004.