France: How the hijab is made out to be everything and nothing

Yasmin Khatun Dewan
While the French state overloads the hijab with notions of female subjugation and extremism, others accept it only through its total reduction Women attend a mosque in Strasbourg, France, in 2012 (AFP)

From theatre actors refusing to perform because of a niqab-wearing woman in the audience, to various bans on the veil in recent years, the principle of le liberte seems somewhat difficult for French people to implement when it comes to religion - in particular, the Islamic faith.

Most recently, the French senate voted in favour of outlawing the hijab for girls under 18 and for those accompanying children on school trips. While the bill must still be approved by the country’s National Assembly before becoming law, the vote late last month quite rightly sparked outrage among the women who could be affected.

Muslim women who choose to cover their hair for religious reasons often do so starting from puberty. And what about Muslim mothers whose children attend school; under this law, would they be sidelined from venturing out with their children because of their headscarves?

Little girls often want to emulate their mothers. Would a Muslim mother be fined under such legislation if her daughter wore a headscarf on a day out? While some might be offended by the sight of a headscarf on a minor, the move to revoke this right is yet another assertion of intolerance in a nation wrestling with its identity.

A contract is just a piece of paper, and an anthem is just a song, but they mean something, and so does the hijab

The sentiment to curtail religious expression seems to extend further every year, fuelling constant debate in France. The hijab has been banned in French public schools since 2004, with a ban on face veils in public places introduced in 2010.

And France isn’t alone. Belgium, Austria, Norway, Bulgaria and Denmark are among a number of European nations that have approved various types of bans. Voters in a recent referendum even opted to ban the niqab in Switzerland - a country with a population of more than 8.5 million, but where only around 30 women wear the face veil. The referendum saw campaign ads with the slogan: “Stop extremism! Yes to the veil ban.”

'Just a piece of cloth'

This isn’t about broader notions of religion in the public space, or security issues from an era before Covid-19 and masks; it is about Islam and the noticeable distinction of a veiled Muslim woman. It stems from a fear of something different, someone not completely understood. 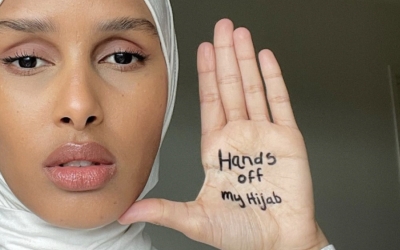 Bruno Retailleau, a rightwing French senator backing the proposed hijab law, said: “Stop telling us that the veil is only a piece of cloth, while it characterises the claim of the Islamist ideologists to impose on us a counter-society.”

I often hear the phrase “it’s just a piece of cloth” - a notion frequently used in response to the negative attention garnered by the veil in societies. It is used by some to demystify the religious practice, although Retailleau seems to be a bit muddled on what the hijab means and what it imposes on others. In any event, the sentiment that the hijab is “just a piece of cloth” is not true, nor is it helpful.

A contract is just a piece of paper, and an anthem is just a song, but they mean something, and so does the hijab. It serves a purpose beyond its material. The hijab is a covering and an act of religious worship; it is not just a visible external symbol, but it represents an internal state of mind. To wear the hijab is to practice my faith.

But reductive framing makes the hijab out to be everything and nothing. The world loves to police the female body.

While the French state seems to have overloaded the hijab with notions of female subjugation, otherness and fears of extremism, others accept it only through its total reduction. Must the hijab become nothing to be acceptable, while it is otherwise too loaded to be tolerated? I truly hope not.

French President Emmanuel Macron has previously said that the hijab is not in line with French ideals, but that he did not wish “to make a law which prohibits it in the street”. French ideals are that of a neutral secular state, guaranteeing freedom of religious worship and a pluralism of opinion. Discomfort does not bother me - but laws that curtail such freedoms most certainly do.

Yasmin Khatun Dewan
Yasmin Khatun Dewan is a London based journalist working in print, online and broadcast. She has written for The New York Times and produced critically acclaimed reports and investigative documentaries including AIB international investigation of the year 2014 nominee "Slave Industry A Year on from Rana Plaza". In 2015, she was shortlisted for British Muslim Media contribution of the year. Follow her on Twitter @Yasm1nK. 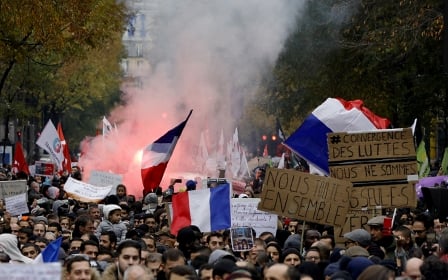