While German gymnasts are praised, Muslim women are scorned for modest dress 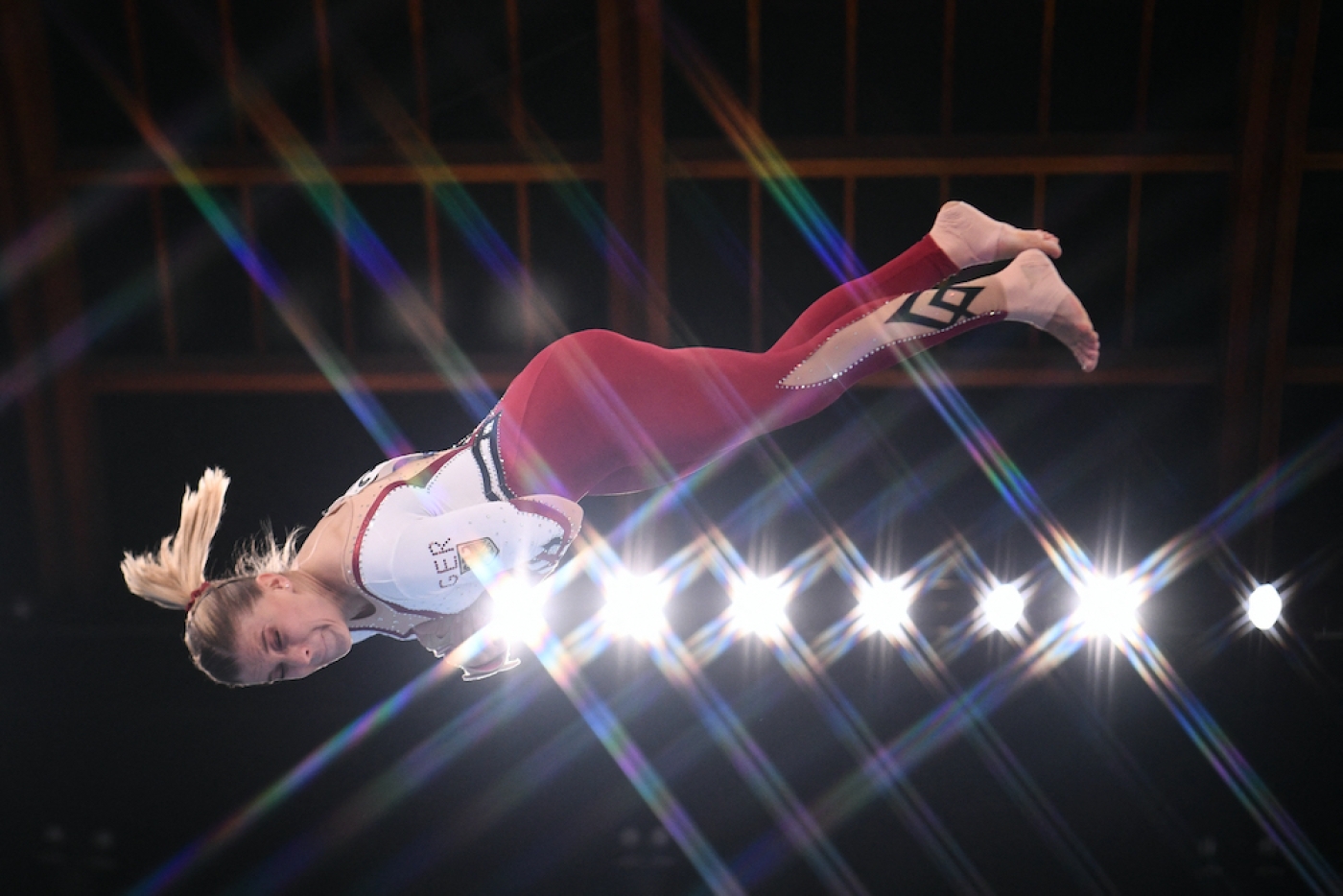 As a Muslim woman and feminist, I am both happy and puzzled by the generous outpouring of support for the German women’s gymnastics team at the Olympics.

Rather than the usual uniform of bikini-cut leotards, they opted for full-body leotards, which cover their legs and ankles. The team spoke confidently of spearheading gender reform in athletics globally, as women athletes assert control in decisions relating to their bodies and attire.

Are Muslim women also celebrated for their choices when they resist sexist rules and demand control over their apparel and bodies? Quite the opposite

According to German artistic gymnast Sarah Voss, 21: “We hope gymnasts uncomfortable in the usual outfits will feel emboldened to follow our example.” Gymnast Elisabeth Seitz, 27, added: “We wanted to show that every woman, everybody, should decide what to wear.”

The German gymnastics team’s sartorial decision was warmly welcomed by the world's media. News reports offered vigorous support and articulated every possible rationale for the women’s decision. Key to their framing was the issue of abuse by male sporting authorities, especially by the former USA Gymnastics team doctor, Larry Nassar.

Vogue published “The Powerful Story Behind the German Gymnastics Team’s Unitards”, while a BBC article was headlined: “German gymnasts’ outfits take on sexualisation in sport.” In SportBible, Max Sherry wrote: “By wearing the unitard, the German competitors hope to protect against ‘sexualisation in gymnastics’ - something that has been a hot topic in recent years following the sexual abuse scandal involving disgraced former Team USA doctor Larry Nassar.”

Reuters wrote about the team “receiving accolades for donning the outfits in the past in a stand against the sexualisation of their sport”. Buzzfeed said: “Germany’s Olympic Gymnastics Team Just Made A Strong Statement Against Sexualisation In Sport”, with Isha Bassi writing that “although no rules were broken, this was a huge step forward in allowing athletes to compete and wear whatever they feel comfortable in - as long as it allows them to perform to the best of their abilities.”

It is a chorus of celebration, with not a naysayer to be found. Everyone in the news media has been practically falling over each other to offer support to the German gymnasts in their fight against sexualised attire in sports. 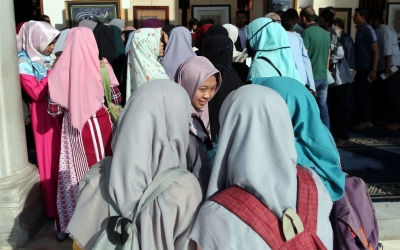 From East to West, war on the hijab reveals gendered Islamophobia
Read More »

The support is unprecedented. The struggle is not.

Along with many other Muslim women, I wonder about the feelings of Muslim women athletes, who have been kicked out of sporting events for body-covering clothing or head coverings. Tell these Muslim athletes that the German gymnasts are being celebrated, and they may ask: Is “girl power” a function of who these women are, white and European?

Are Muslim women also celebrated for their choices when they resist sexist rules and demand control over their apparel and bodies? Quite the opposite.

In 2011, the Iranian women’s football team was summarily disqualified by FIFA because of their head coverings. They certainly did not get the same reception as the German gymnasts. The Iranian team was heartbroken at losing this opportunity and wept openly. Global solidarity was thin on the ground. I wrote about this 10 years ago, when I encountered little concern for sexualisation in sport and women’s agency in the news.

Compare the ringing endorsements bestowed upon the German team with the cold, disdainful coverage of the Iranian athletes. CBS reported from FIFA’s perspective, saying: “Iran’s women’s team was correctly prevented from playing a 2012 Olympics qualifier wearing Islamic head scarves. Iranian officials were ‘informed thoroughly’ before Friday’s match against Jordan that the hijab scarf is banned for safety reasons.”

CNN likewise reported the actions and statement of FIFA, with no attempts to interview the Iranian women as the German gymnasts were interviewed. While there were a few voices vociferously calling out discrimination against Muslim women for attire, by and large, Muslim women simply were not seen as capable of resistance. Only when white European women took on athletic uniforms did it become a worthy cause.

A rare voice for justice and equity in sports, Dave Zirin on Al Jazeera demanded of FIFA: “Let them play.” The US sportswriter exposed former FIFA president Sepp Blatter’s objections to the Iranian uniform as baseless, reporting that Blatter “proposed in 2004 that women players wear ‘hot pants’ on the pitch to boost the sport’s popularity. He said that the ‘tighter shorts’ would produce ‘a more female aesthetic’.” Why would such a man have authority over women’s sports?

But Zirin’s voice is a rare one. As another brilliant sportswriter, Shireen Ahmed, wrote for TRT World: “One of the main reasons that hijab bans and those who fight them have not been garnering attention is because the media does not report on it.”

Ahmed has written for years on how athletic organisations fail to offer uniform accommodations, especially in the case of the hijab. She critiques news coverage for its inequalities, as “the gaps in connecting struggles of Muslim women athletes who are victims of the same systems of misogyny, to women who look like the Norwegian beach handball team, remain vast and immeasurable”.

The resistance of racialised women athletes is not of interest to the news media. Their sartorial resistance against sexualisation is not read as resistance and agency, but as subjugation. A white German gymnast refuses to wear a bikini-cut leotard, and she is framed as a “girl boss”. A Black Muslim woman like the former college basketball player Bilqis Abdul-Qaadir demands uniform accommodations, and the rulebook is thrown at her, with zero regard for her perspective. Muslim women’s sartorial choices are interpreted as oppression.

Sports sociologist Nida Ahmad says that coverage of Muslim women “relies on antiquated tropes on oppression of Muslim women”. This gendered Islamophobia is the frame that determines Muslim women’s sartorial resistance as unworthy of widespread solidarity or celebration.

They do not see us. No matter what we do, they see the ghosts they themselves conjure, and nothing we do convinces them that we are real

In a Mashable article, Siobhan Neela-Stock described some historical highlights of female athletes bucking sexist sartorial demands, culminating in the German gymnastics team. Not a single woman on her list was Muslim, despite their long, unacknowledged struggle against sporting attire. (Neela-Stock did include a brief reference to Muslim female athletes’ uniforms, with a link to my Twitter thread on the subject.)

A few Muslim women have written about double standards on sports apparel. Saba Fatima has examined the difference between how Muslim and non-Muslim women are treated in sporting attire. “Why,” she asks, “is the Muslim case so different for Western non-Muslim feminists?”

In USA Today, Anushay Hossain asks: “Why do we so fiercely support the right of white women to cover but not of Black or brown women to do the same?” In the Flock, Mariam Khan points to how the German gymnasts and the Norwegian beach handball team were celebrated and defended in the press (the Norwegian handball team was fined for wearing shorts rather than tiny bikini bottoms at the Euro 2021 tournament): “The solidarity shown to both teams has been widely publicised - the singer Pink even stepped in to offer to pay Norway’s fines. And yet, still, Muslim women live an entirely different reality.”

While the German gymnasts are praised for being courageous and avant garde, the Court of Justice of the European Union ruled just last month that private employers may discriminate against women who wear religious clothing. Across Europe, Muslim women face widespread legal, political and popular acts of discrimination for wearing the burqa, hijab, burqini, or even just modest clothing. 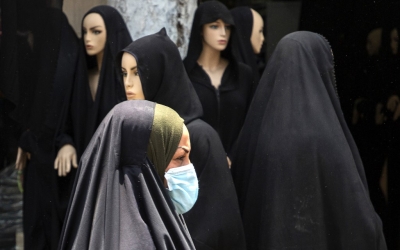 The sight of several armed French police officers surrounding a Muslim woman wearing a burqini at a Nice beach, watching as she removed a long-sleeved tunic, is burned into the minds of Muslims worldwide. In Germany, where the female gymnasts are fighting sexualisation with international support, there are partial bans on the hijab and burqa, affecting teachers and students.

Consider how European Muslim women are slammed with discrimination at the highest and lowest levels, and Muslim female athletes kicked out of sporting events for full-body clothing. Juxtapose them with the German gymnastics team: white women with agency and power, pushing the limits of athletic attire, and leading the way for many more women to come.

Except these white European women did not lead the way. But Muslim women’s agency, power, resistance and leadership simply do not compute as reality for mainstream global news media. They do not see us. No matter what we do, they see the ghosts they themselves conjure, and nothing we do convinces them that we are real.

Shabana Mir is an associate professor and Director of the Undergraduate Education at the American Islamic College, Chicago. She is author of Muslim American Women on Campus: Undergraduate Social Life and Identity. She tweets @ShabanaMir1 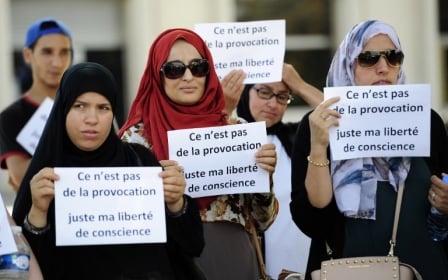 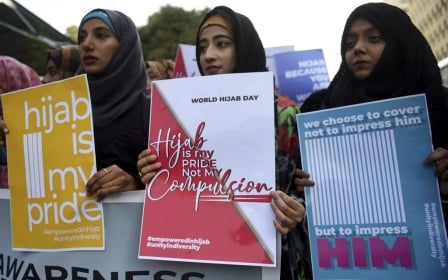 Islamophobia
The West's curious obsession with the veil
Sahar Ghumkhor 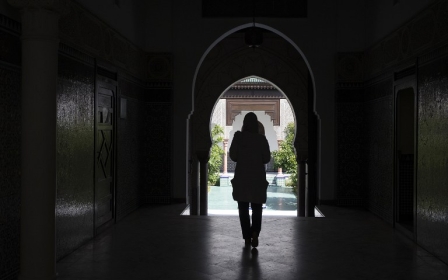