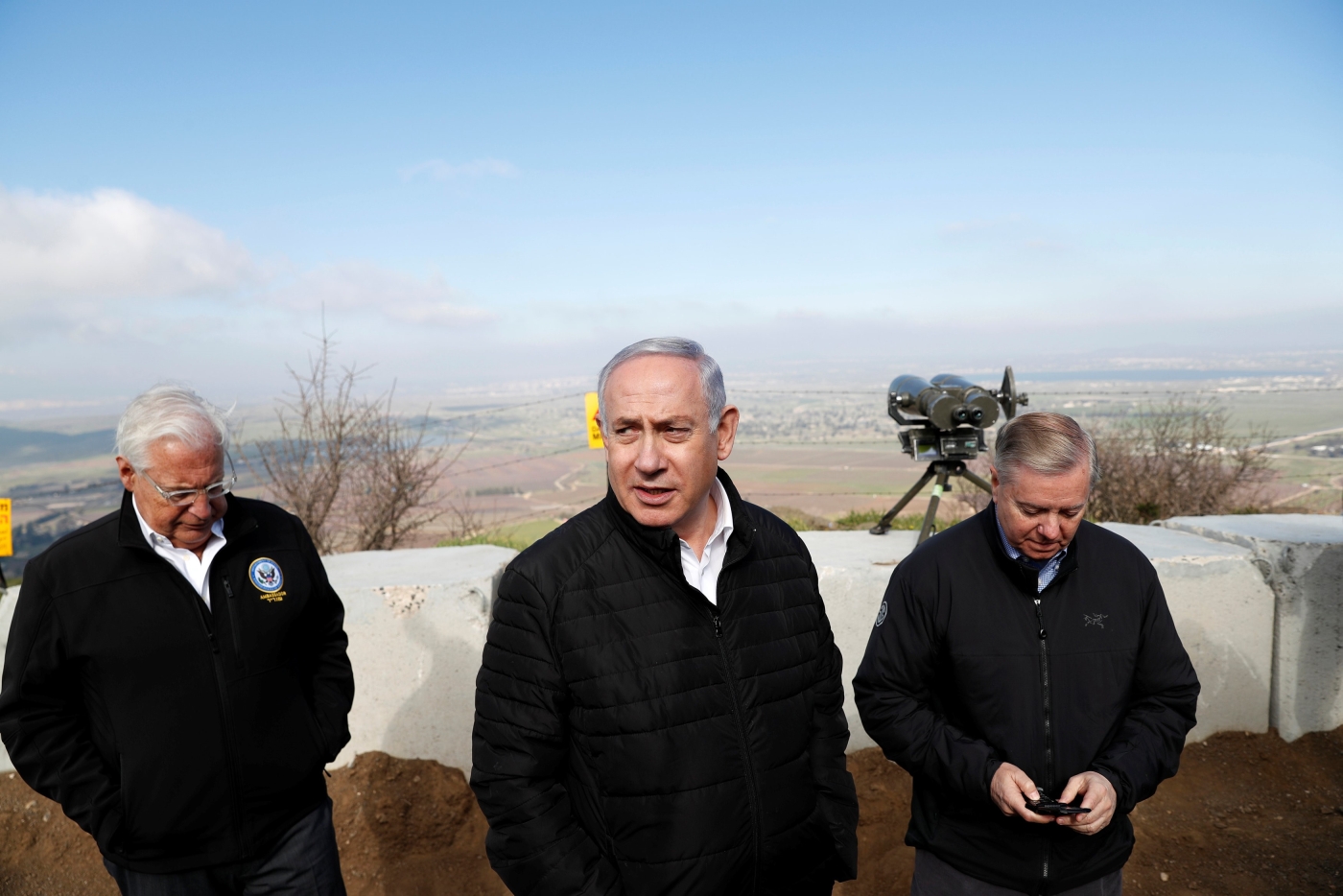 Netanyahu, Republican Senator Lindsey Graham and US ambassador to Israel David Friedman visit the border line between Israel and Syria at the Israeli-occupied Golan Heights on 11 March (Reuters)

US Senator Lindsey Graham, a close ally of President Donald Trump, has a theatrical turn of phrase and a ham actor’s sense of timing. He enjoys rhetorical outbursts and dramatic flourishes and is always on the hunt for an appropriate stage.

What better one to reaffirm his undying support for Israel and Prime Minister Benjamin Netanyahu than the occupied Golan Heights?

The Golan was seized from Syria in the 1967 Six Day War.  In 1981, the Israelis effectively annexed the western two thirds that it had occupied but never formally incorporated into the state of Israel. The senior senator from South Carolina announced he was out to help change that.

There he was on the Golan Heights on 11 March with Netanyahu and the US ambassador to Israel David Friedman. Standing on the fortified border, with a gentle breeze riffling his hair, he proclaimed "this territory has a rich Jewish history. Strategically I am standing on one of the most important pieces of land in the state of Israel."

As the Israeli prime minister looked on Cheshire cat-like, Graham declared: "I’ve got a simple message: I will go back the US Senate, working with Senator [Ted] Cruz, I will start an effort to recognize the Golan as part of the state of Israel, now and forever. Because to give this territory up would be a strategic nightmare for the state of Israel."

Of course no one is seriously suggesting that the Golan is about to be given up by the Israelis and it would come as a big surprise to Syrian President Bashar al-Assad that such a move would even be contemplated. Still, it made for good theatre.

As such, it was intended to help Netanyahu, who is facing perhaps his toughest fight in a career littered with savage political brawls and surprising comebacks. The prime minister has been indicted on several charges involving bribery, fraud and breach of trust.

To postpone a date in court, he requires an election win. The commitment from America to support Israel formally incorporating the Golan "now and forever" will burnish Netanyahu’s credentials with the far right settlement parties he needs to secure victory. It will not hurt his standing with much of the wider Israeli electorate either.

And Netanyahu has picked a good time to pitch the bid. Assad is preoccupied with consolidating his position and regaining his hold over Syria. With his army back in control of the Syrian side of the Golan, the last thing Assad wants is to pick a fight with the Israelis. Netanyahu understands that well and it was one more reason why he was delighted that Senator Graham was so fulsome in his peroration from the mount.

"So if you believe, as I do," the senator declaimed “[that] the State of Israel is a strategic partner to the United States, and its survival and its prosperity and security is relevant to American national security, you would come here, to the Golan."

The last thing Assad wants is to pick a fight with the Israelis. Netanyahu understands that well

The senator’s words stirred Ambassador Friedman to tweet that "compelling evidence" was "presented of the critical strategic importance of Israeli control of this territory. Senator Graham spoke movingly and with great moral clarity on this subject."

A day later, and right on cue, the Israel army released what it called the "Golan File", a sinister new plot that involved the infiltration of a village on the Syrian side by what it called a "Hezbollah terror cell".

Curiously, the Israeli army made a point of saying that Assad had no knowledge of this terror cell aiming to attack Israel. Given the close relationship between Hezbollah and the Syrian ruler and the fact that his army is back in control on the Syrian side, it seems a surprising claim.

It may have been made so as to drive a wedge between Assad and Hezbollah. Additionally it gives Assad plausible deniability, exempting him from Israeli blame and the threat of potential retaliation against his forces. The target, the Israeli army is making abundantly clear, is Hezbollah and not Assad.

All of this was a bit too much for a former senior Israeli army commander. Amiram Levin told Israeli Radio that it was yet another case of the military being used for political ends. "Noise and ruckus about nothing," he complained, adding, "this looks like a cynical use of the army in order to dictate the political order of the day. There is nothing new here." Not all quiet on the Golan front: The changing Israeli-Syrian equation
Read More »

And further underlining what a theatrical set piece the Graham visit to the Golan was, the US State Department in its annual review of human rights no longer refers to the Golan as "Israeli-occupied". It is now "Israeli-controlled Golan Heights".

The review was released on 13 March, the day after the Israeli army briefed the media on the "Golan File".

A state department official, dancing on a bureaucratic pinhead, had this to say: "You're just trying to find the way of describing the place that you're reporting on and 'occupied territory' has a legal meaning to it. I think what they tried to do is to shift more to just a geographic description."

Meanwhile back on the Golan the prime minister was savouring the moment. He called Ambassador Friedman and Senator Graham "two of the greatest friends of Israel", while applauding the "very strong remarks that articulate America’s support for Israel, the policy of President Trump, and takes it to a concrete step – to keep the Golan as part of Israel."

And to keep Benjamin Netanyahu out of the courts and in office for another term. Syria War
Syrians seeking refuge in the Golan left cut off from outside world
Syria War
IN PICTURES: Syrians take shelter in the Golan