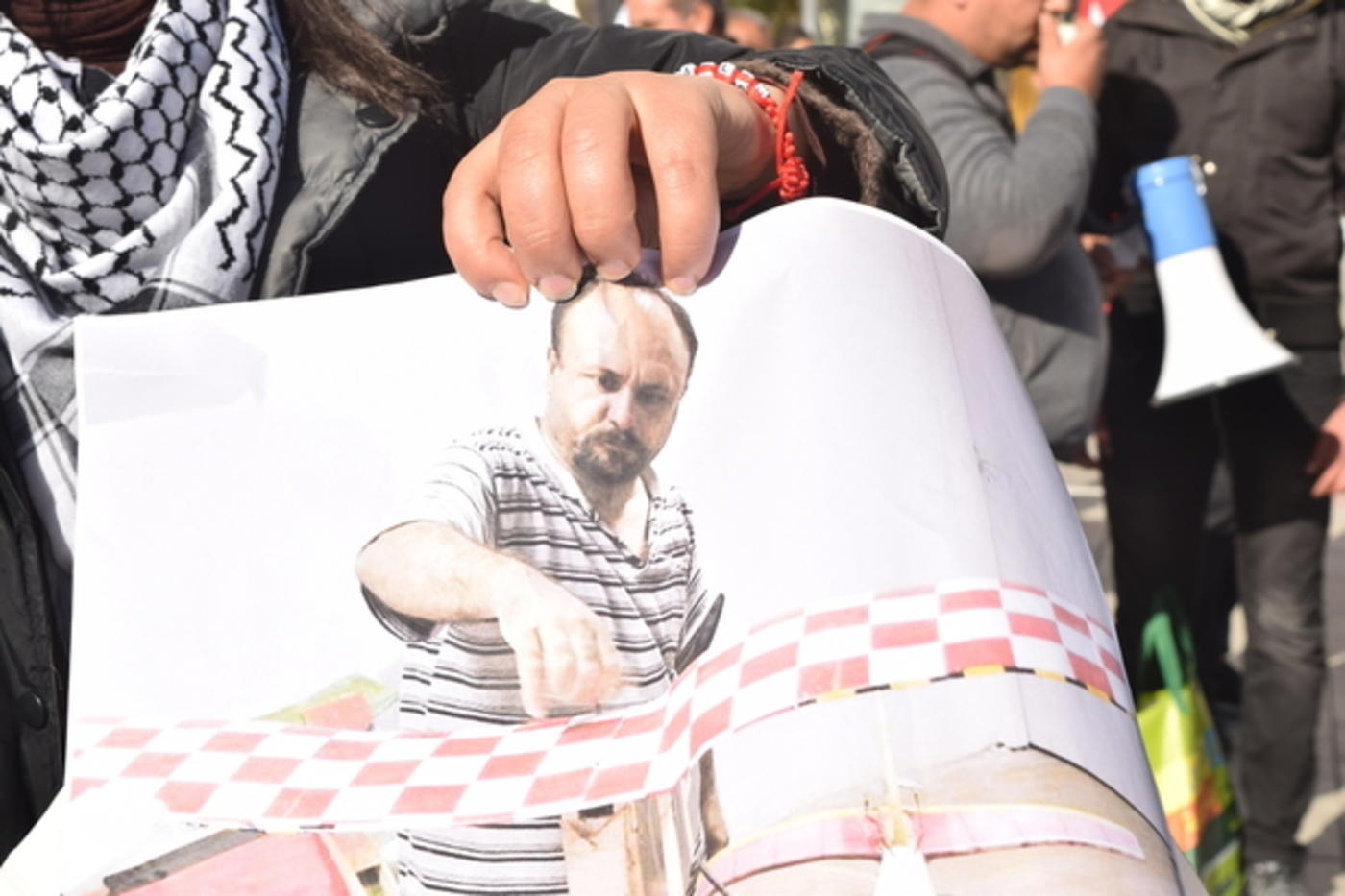 The assassination of Tunisian engineer and Hamas drone expert Mohamed Zouari on 15 December at the wheel of his car outside his home sent shock waves through the north African country, with many expressing outrage at his killing.

Numerous demonstrations took place both in the capital, Tunis, and in his hometown of Sfax, with thousands joining protests to condemn what the military wing of Hamas alleges was the work of Mossad, the Israeli secret intelligence service.

Their anger has been exacerbated by the lack of sensitivity, honesty and coherence with which the Tunisian authorities have responded to the case.

More than negligence, some protesters claim that the silence of the government is a sign of its involvement in the murder, pointing to the fact that the national security director resigned from his post one day before the assassination as evidence.

However, despite popular pressure, the authorities have not felt compelled to react. While their utter silence has outwardly dampened popular anger, it has also significantly heightened criticism and suspicion and exacerbated questions and fears about the government's commitment to the Palestinian cause.

More importantly, it has left the people of Tunisia feeling misrepresented and deceived.

The Palestinian anti-colonial struggle is strongly supported across the political spectrum by Tunisians. Many feel that the government's reaction to Zouari's murder would have been different had a popularly supported constitutional article, affirming that relations with Israel would not be normalised, been adopted during the 2011-2014 constituent assembly.

The reporting by Israel's Channel 10 from Sfax and Avenue Habib Bourguiba – the capital's main thoroughfare - confirmed the sense among a significant part of the Tunisian public that the country's sovereignty is under threat.

In the eyes of many Tunisians, either the state is an accomplice in the murder, or it is unwilling to protect its citizens. This can only increase the feeling of being unsafe and encourage unrest

The issue of sovereignty has captured the attention of many in the aftermath of the 2010-2011 uprising, as an increasing number of international organisations, financial institutions and powerful states seem to play an important role in everything from devising Tunisia's investment law to security and institutional reform.

This is coupled with the country's increasing debt - now more than 60 percent of the GDP - most of which is contracted to pro-Israeli Western countries.

READ: The $14 billion that could keep Tunisia on the path of democracy

More recently, the government was encouraged to spend close to $2m in organising the 2020 investment conference.

The conference was criticised not only for its high price tag but also for reinforcing long-standing exploitative investment patterns and failing to achieve one of its key aims - shifting the focus of the international press away from the country as a core exporter of terrorism.

To understand the state and society's divergent responses to the Zouari assassination, we must first grasp two contentious issues:

Post-colonial Tunisia has not adopted a categorical stance regarding the state's relationship with Israel. In the context of Arab nationalism and Third-Worldism, the Palestinian struggle has occupied a central position among most Arab countries and people.

At the same time, Habib Bourguiba (the country's first post-independence president), was, like other Arab leaders, constrained in his approach to Israel.

While some Arabs felt he had betrayed the cause by not demanding the total liberation of Palestinian land, he was lauded by many Western states for what they saw as his constructive role in moderating debates and for being the first Arab leader to introduce the idea of the two-state solution.

Bourguiba's position also helped reinforce Tunisia's alliance with pro-Israeli Western countries such as the US, France and the UK.

Though an official anti-normalisation position was dropped from the agenda, Tunisia maintained its ties with the Palestinian cause as a potential negotiating asset for the country’s foreign policy.

Tunisia's position regarding normalisation became even more flexible after Zine El Abidine Ben Ali took power in 1987, despite the new president's declaration of his commitment to the cause, especially after the Oslo Accords of 1995.

Since the early 1990s, offices of interest have opened their doors mutually in Tel Aviv and Tunis to facilitate visas for Israelis to visit Tunisia, especially for the pilgrimage to the Ghriba synagogue in Djerba.

This was a small yet very significant step towards official normalisation (the offices stayed open until the outbreak of the second Palestinian intifada, in 2000).

With significant pressure from external actors, the decision to withdraw the law criminalising normalisation from the first draft of the constitution nonetheless represented continuity in the state's pre-revolution approach to the Palestinian cause.

The appointment last yeat by the Nidaa Tounes coalition government of Khemaies Jhinaoui, the former head of Tunisia's interest office in Tel Aviv in the 1990s, as foreign affairs minister, represented another blow to Tunisia's pro-Palestine sensibility.

The post-revolution context, especially after the designation of the country as a non-NATO member ally, increased loans and financial aid contracted with Western states and organisations, as well as the fragile economic and social situation. These factors all made the country ripe for further pressure to take steps towards normalisation, despite popular opposition.

Successive Tunisian governments have presented themselves as fierce protectors of the country's national sovereignty against Israeli aggression.

After the 1985 Israeli attack on the Palestinian Liberation Organisation (PLO) headquarters in a town just outside the Tunisian capital, the official stance of Tunisia was to promptly file a complaint to the United Nations Security Council (UNSC) for violation of national sovereignty and territorial integrity as well as causing material and human damage.

Beji Caid Essebsi, the current Tunisian president and then foreign minister, described the Israeli offensive as a "terrorist act" and said that "Tunisia would not allow its territory to be violated".

The complaint asked for condemnation as well as damages. Bourguiba even threatened to cut diplomatic ties with the United States if it decided to veto the resolution.

Despite censoring Israel and providing Tunisia with the right to ask for reparations, the resolution did not set any terms or mechanisms that could compel the perpetrating country to engage in an actual reparation process.

The Tunisian reaction to the 1988 assassination of Khalil al-Wazir, a top aide of Palestinian leader Yasser Arafat, commonly referred to as Abu Jihad - after the coup that brought Ben Ali to power - followed along similar lines.

Tunisia accused Israel of perpetrating the murder, an operation only acknowledged by Israel in 2012. The case re-emerged after the revolution in Tunisia, when Israel admitted responsibility for the assassination. At the time of these revelations, some constituent assembly representatives accused the deposed president and his government of complicity in the affair.

They pointed to rumours that the national security archives were burned a few days after the revolution as evidence of a cover-up.

Beneath the insincere commitment by Tunisian authorities to support the PLO and the Palestinian cause lies the shadow of a doubt that Tunisia had secretly always maintained ties with Israel, a doubt which is reinforced by Tunisia's close ties with pro-Israeli countries.

Tunisia's position on the Zouari assassination does little to assuage these suspicions. Although Tunisians want the government to protect the country's territorial integrity, there are external and internal pressures for Tunisia to continue promoting its image as a "safe" place for foreign investment and therefore its contribution to the fight against terrorism is central.

Hamas is considered to be a terrorist organisation by the US, the EU, Canada and the UK. Defending the Hamas-affiliated Mohamed Zouari would undermine that image, confirming the belief that Tunisia supports terrorism.

Whatever small gains for the country's sovereignty were made in the post-colonial period seem to have been lost in the aftermath of the revolution.

Despite the similarities with the assassinations of 1985 and 1988, the government has refrained from pursuing the Zouari matter diplomatically or through an official complaint to the UNSC. In fact, Essebsi, who once pleaded against Israel after its 1985 attack on the PLO headquarters in Hammam Chat, has been a total no-show since the Zouari assassination.

It seems that the country's current leadership prioritises a public image of malleability and close relations with the West over its sovereignty and commitment to a cause of long-standing importance to the people of Tunisia and region more broadly.

The red line safeguarding territorial integrity and sovereignty has been eroded by the political and economic choices and policies taken by Tunisia's successive post-revolution governments. Tunisia has entered deals in which it has lost its ability to take strong and independent positions with regards to its core priorities.

So what happens next?

For many Tunisians, the issue has brought to the fore the importance of territorial sovereignty in the struggle to achieve popular sovereignty - one of the central aims of the revolution.

But how can the government continue to take positions that are so unpopular with the population?

How can the government continue to take positions that are so unpopular with the population?

The silence on the part of the government and its failure to hold accountable once again those who have facilitated yet another murder on Tunisian territory only add to people's mounting frustrations.

In the eyes of many Tunisians, either the state is an accomplice in the murder or it is unwilling to protect its citizens. This can only increase the feeling of being unsafe, thereby encouraging unrest.

If Tunisia's economic dependence on countries with divergent agendas to those expressed through the Tunisian popular will pose a challenge to the basic claim of territorial integrity, then how "free, independent and sovereign"  - to quote Article 1 of the Constitution - is Tunisia really?

Image: A protester carries a poster of engineer and Hamas drone expert Mohamed Zouari after his assassination in Sfax in 15 December 2016. (MEE)