How Saif al-Islam became a bargaining chip between Libya's factions

Jason Pack
, Rhiannon Smith
Confusion over Saif's 'pseudo-release' demonstrates that Libya's main players are no closer to putting aside grievances for the common good 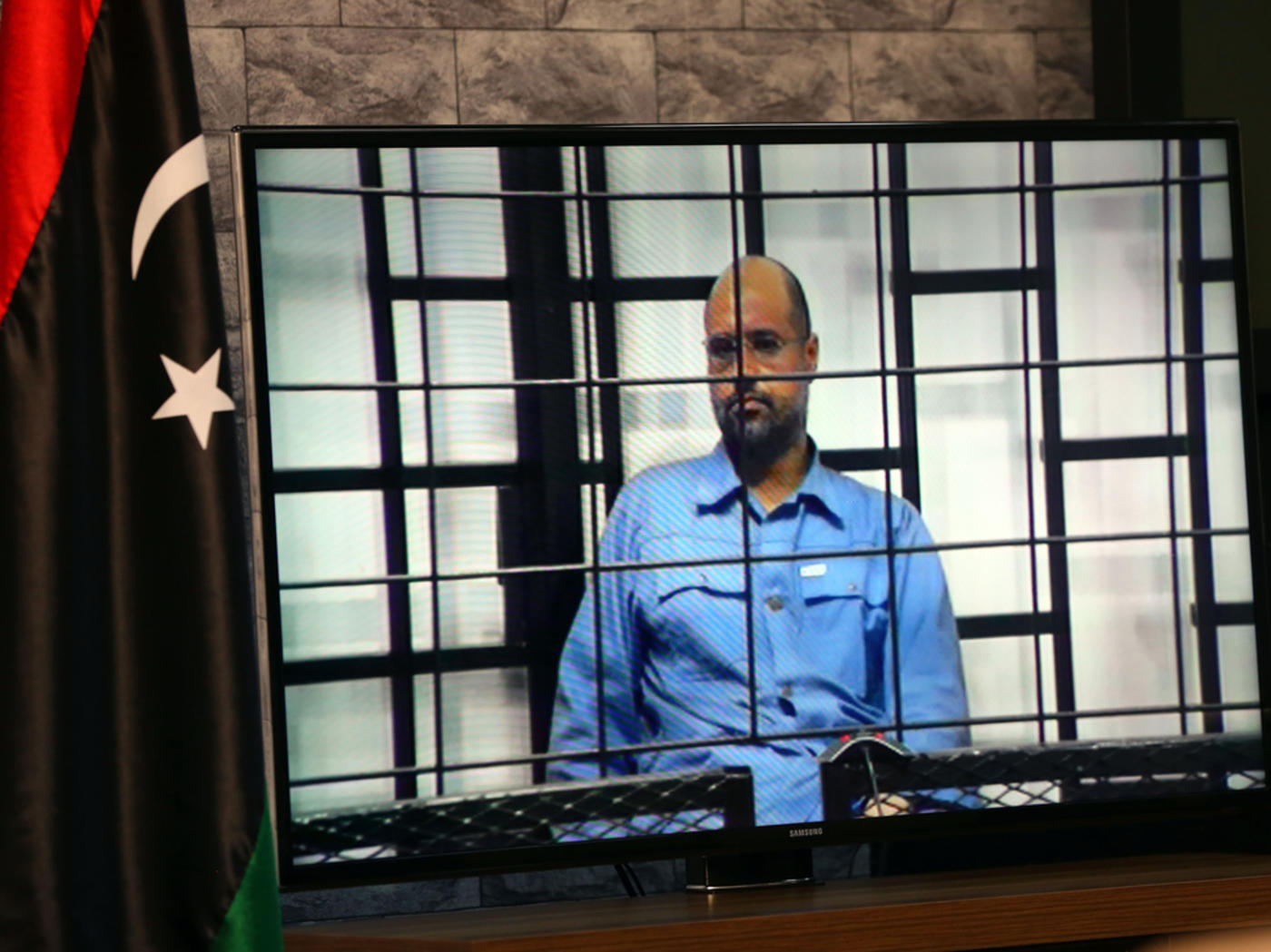 Even before he was captured and his finger infamously chopped off, Saif al-Islam Gaddafi had a way of making headlines, charming his supporters, and enraging his enemies.

Saif was the dapper multi-billion dollar poster boy for détente between Muammar Gaddafi’s Libya and the West. Saif’s allies spearheaded the economic reforms and market liberalisation that took place in Libya from 2003 onwards, along with the crony capitalism that came with it.

From 2003-2010 Saif’s ascendancy also represented the normalisation of Libya from the ideological and erratic tyranny of his father, into a normal kleptocratic quasi-monarchy of the sort that is all too familiar throughout the Middle East and Africa.

And yet when push came to shove and Saif had the opportunity to side with the very reasonable demands of the Arab Spring protest movement in February 2011 and to support their push for human rights, civil society freedoms, and more economic opportunities, he balked and came down on the side of his father’s desire to stay in power at all costs. He showed hate and vitriol as he preached that the rebels were rats and should be crushed.

In November 2011, in the wake of his father’s death, Saif was caught dressed as a Tuareg trying to flee to Niger. The militiamen who captured him were from Zintan, a small town in the Nafusa mountains southwest of Tripoli, whose residents gained great revolutionary credentials in the early post-revolutionary days for their success in fighting Gaddafi’s forces. Zintan has a small population and the Arab town is surrounded by Berber villages with rival militias.

The Zintanis were always uneasy bedfellows with the Misratan, Islamist, Berber and jihadi militias who they fought alongside to help overthrow Gaddafi. These tensions were accentuated after the revolution because as a small mountain town, Zintan struggled to compete both strategically and financially with Misrata, Libya’s third largest city and the country’s commercial maritime hub. However, Saif gave them crucial leverage, allowing them to punch above their weight and leading the National Transitional Council (NTC) to offer the defence minister portfolio in the first post-Gaddafi cabinet to Zintan. Since that point they have refused to turn Saif over to any of Libya’s transitional governments. Saif is also wanted by the International Criminal Court (ICC) for war crimes, and in 2015 he was sentenced to death in-absentia by a Tripoli court as the Zintani militias holding him refused to allow him to be transported to Tripoli for the trial.

With the takeover of Tripoli by Misratan and Islamist militias supporting the Tripoli-based General National Council (GNC) in 2014, and the subsequent bifurcation of Libya into two governments, the Zintanis became the major force in western Libya to support the House of Representatives (HoR) and its eastern government based in Tobruk and Beida. This eastern government has key former Gaddafi officials in top positions – most notably General Khalifa Haftar – and this has been the main grievance against them from the Misratans and Islamists who suffered disproportionately under Gaddafi’s rule.

Since the Zintanis and Haftar have been tarred and feathered as Gaddafi’s troops, there has long been speculation that they might work with Saif and release him as a rallying cry for former Gaddafi elements to join them in the fight against the Misratans and whichever political body they are opposing, whether it be the GNC or the UN-brokered Government of National Accord (GNA). Therefore, last week’s sensational news of Saif Al-Islam Gaddafi’s release did not seem all that improbable. It seemed possible that the HoR and the Zintanis would want to send a message and create a new coalition. Furthermore, the choreography seemed to fit.

On 6 July, British lawyer Karim Khan announced that Saif had been released on 12 April, pursuant to the amnesty law legislated by the HoR in 2015. Khan said that he will lodge a petition with the ICC to have charges against Saif dropped, and that Saif could play a positive role in Libya’s reconciliation. His account was corroborated by Saif’s supposed jailer, Colonel Al-Ajmi al-Atri from Zintan, who announced on 7 July that he had released Saif from captivity upon a ministerial order by the HoR minister of justice, and that Saif was free in Libya.

Nevertheless, despite the plausible logic of this narrative, it is almost certainly bogus. No evidence has been produced by Khan, the Zintanis or the mainstream media to show that Saif has indeed been released and he is almost certainly still in an impromptu Zintani jail.

Just as the media has abandoned Saif’s case, so have his family and former supporters. His case has been taken up by human rights advocate Mishana Housseinioun.

Speaking to the authors, she said that Khan was never appointed by Saif as his lawyer. Dr Housseinioun has been campaigning for Saif to have legal representation of his choosing and for the African Union to work to uphold the African Court ruling and send a delegation to visit him as there has been no proof of life since his court appearance in 2014.

Bizarrely, his Australian council, Melinda Taylor was held for nearly a month in Zintan in 2012 after she was accused of spying and attempting to pass Saif coded messages, actions which she almost certainly didn’t commit.

Since Saif has lacked official advocates, Mishana has brought the matter before the African Union and secured a judgment rebuking Libya and the Zintani militias for its treatment and irregular detention of Saif. The judgment has found that: 1) Libya violated and continues to violate Saif Gaddafi's right under Articles 6 and 7 of the African Charter; 2) orders Libya to uphold and protect Saif's rights; and 3) to report back to the Court in 60 days of notice of the judgment about its implementation of the judgment.

It falls within the AU's mandate to uphold African Court rulings and hence to compel whatever Libyan authority (be it the GNA or HoR) to do something. Saif’s faux release and the HoR authorities’ handling thereof shows that political machinations rather than concerns about justice, whether for Saif or for his alleged victims, are the driving force behind this manoeuvre.

Mishana asserts that Saif has not instructed Khan himself and that he remains in custody in Zintan. Until Khan can produce evidence backing up his claims and showing that Saif appointed him as his lawyer, he cannot purport to act on behalf of Saif. In short, it seems likely that Khan and others have staged this publicity stunt because of the impact it is likely to have on Libyan politics, and they seemed to have played their cards brilliantly.

The news of Saif’s release caused a wave of panic mainly amongst hardline revolutionaries, Islamist groups and Government of National Accord (GNA) supporters, reinforcing their fears of a complete counter revolution by ex-regime forces facilitated by the HoR and the UN mediation process. On 10 July, the Presidential Council (PC) of the GNA issued a statement denouncing Atri’s comments, stressing that Saif’s release is a breach of justice and that it will cooperate with the ICC in his case. The local council in Zintan, Atri’s hometown where Saif was jailed, issued a statement denying his release (acclaimed by the PC), but sources in the city say that the local council has no relevance to Saif’s case or his whereabouts, and issued the statement only to take political heat off the city.

The divergent reactions to Saif's alleged release highlight the fissures in today’s Libya. There has been no formal truth and reconciliation process, no meeting of minds to form a true unity government, and no formation of a genuine anti-Islamic State (IS) coalition.

The primary concern of Misratans, Islamists and so called “revolutionaries” seems to be preventing Haftar and supposedly former Gaddafi elements from accessing power, while on the Haftar side no one is willing to put aside grievances against Misrata to work with the GNA to fight IS. Despite his crimes, Saif should receive a fair trial, not the extrajudicial killing of his father. Doing so could be a foundational act of justice for the building of a new regime.

Saif’s pseudo release demonstrates that the main players are no closer to putting aside their grievances for the common good than they were even before the GNA was formed. This, even more than the inhuman treatment that Saif is probably still receiving in his captivity, is the real tragedy revealed by this debacle.  No one seems ready to put aside past grievances to work together for Libya’s future.

- Jason Pack is the founder of EyeOnISISinLibya.com, president of Libya-Analysis, and the North Africa analyst at Risk Intelligence.

- Rhiannon Smith is a partner at EyeOnISISinLibya.com and programme manager for the Middle East at the University of Cambridge Judge Business School. She lived in Tripoli from October 2011 to January 2014.

Photo: Journalists watch as the judges (unseen) question Seif al-Islam, the son of slain Libyan leader Muammar Gaddafi, broadcast live from the western Libyan city of Zintan, from inside a room in Tripoli on 22 June 2014 (AFP). 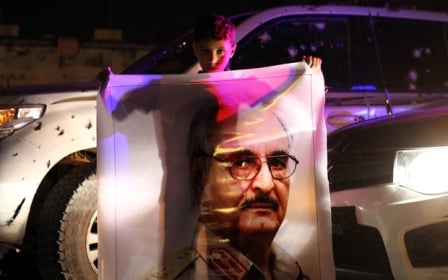 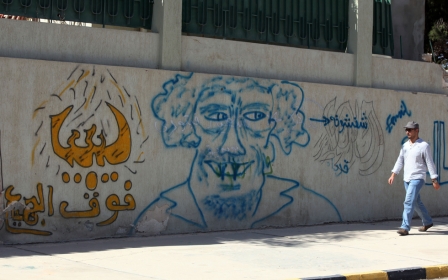