How the UAE put Aden under the control of the militias

MEE correspondent
For the first time since the war started in 2015, the UAE, and not Saudi Arabia, appears to be leading the coalition on the ground 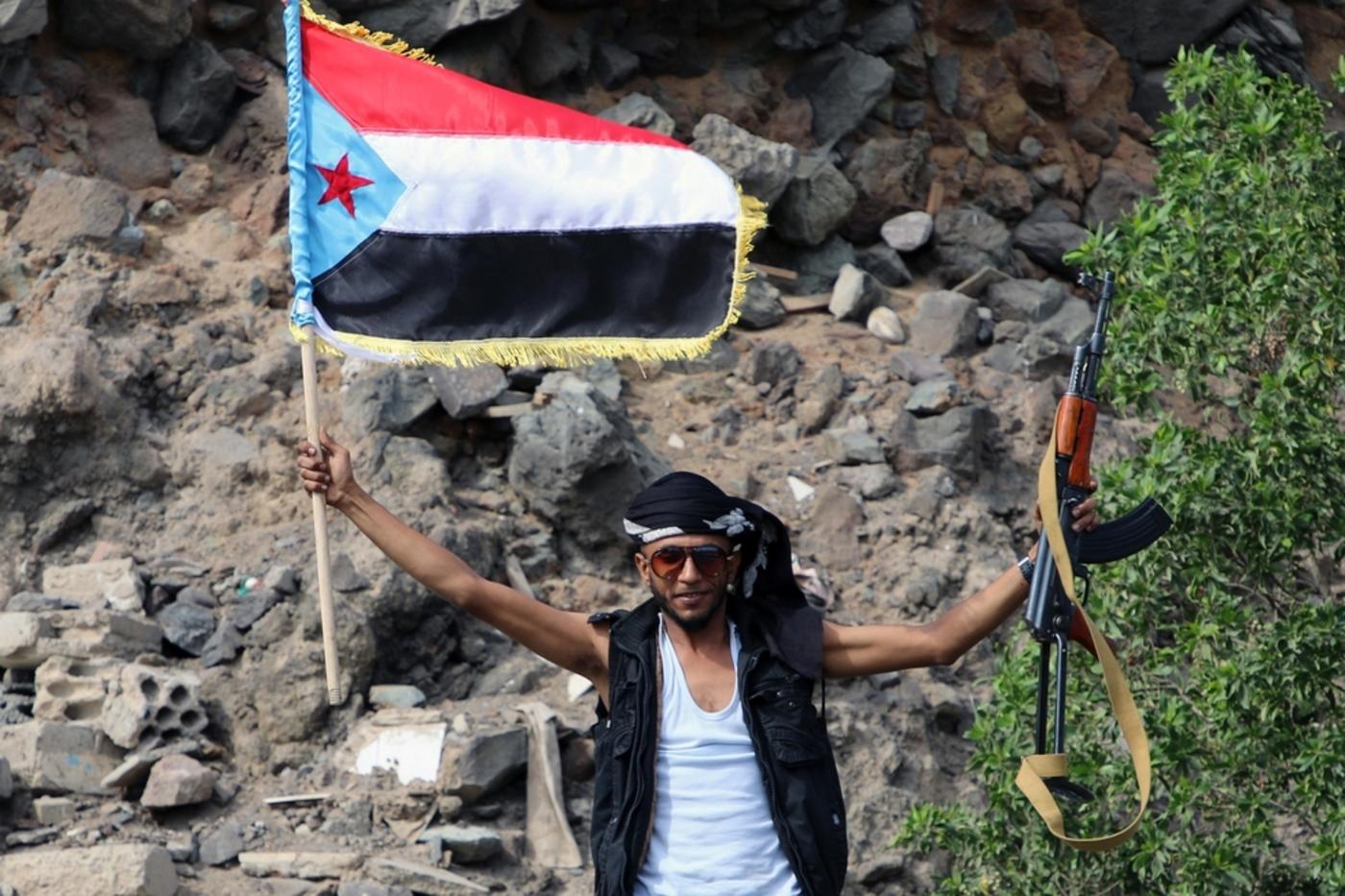 On 21 January, the Southern Transitional Council (STC) in Aden announced escalating measures against Yemen's government, which has been based in the city for more than two years.

Aidarous al-Zubaidi, the head of the STC, gave the government one week to resign, and rejected Prime Minister Ahmed Obaid Bin Daghar's initiative to hold parliament sessions in Aden. Bin Daghar had announced a few days earlier that parliament would meet in Aden to approve the latest budget, the government's first since 2015.

The STC's ultimatum was similar in tone and terms to the announcement by Houthi rebels in August 2014, prior to their coup against the Yemeni government. At that time, the Houthis gave the government a week to resign, accusing it of corruption before storming the capital Sanaa and placing the government and president under house arrest.

In Aden, tensions had been rising between the two sides, leading to the eruption of clashes this past Sunday. For the past two years, both sides shared control of the city, but the STC Security Belt (a reference to the STC force in Aden which comprises of 20 brigades) had more districts under its control, more military bases and better arms than forces loyal to the Yemeni president.

Sources from the pro-separatist Southern Movement, the prime minister's office and the STC, who spoke to Middle East Eye, painted a picture of what has unfolded over the past few days.

The STC's ultimatum was similar in tone and terms to the announcement by Houthi rebels in August 2014, prior to their coup against the Yemeni government

According to these sources, Mohammed al-Zubaidi, Aidarous' brother, mobilised STC forces at the entrances to the city, allowing them to quickly take control of roads between Abyan and Aden.

Mahran al-Qubati, a senior military officer loyal to Yemeni President Abd-Rabbuh Mansour Hadi and head of the Fourth Presidential Brigade, said he received clear and direct orders from the president to prevent the STC from taking over any new areas or military bases, and to use force if necessary.

The Fourth Presidential Brigade, based in the district of Dar Saad, was one of the main targets of the STC.

By Monday night, after 48 hours of fighting, STC forces had withdrawn from Dar Saad. The districts of Sheikh Othman, Mansoorah, Mualla, Buraiqah and al-Shaab remained relatively calm, with both sides holding to their positions.

Meanwhile, Hadi's forces took control of a military camp in al-Areesh that used to be with the STC, and heavy clashes erupted between the Third Presidential Brigade and STC forces in Khormaksar, where the airport is located.

Further clashes in the Jabal Hadeed Mountain led to the death of Abdulmajeed Shae'e, the brother of Shalal Shae'e, who is the head of the STC Security Belt and Aden's security commander.

When the fighting continued, UAE jets fired on the president's forces, giving the STC an opportunity to storm the base. The prime minister's office confirmed that all the bases of the presidential forces, except the base near the presidential palace, fell to the STC forces on Monday night after the supposed ceasefire, with direct help from UAE forces in Aden.

On Tuesday night, cabinet members were gathered in the presidential palace, sources told Middle East Eye. "We are like prisoners waiting for the UAE to make its decision," they said.

Government forces have been confined to two areas of the city as the prime minister awaits word from Riyadh. Bin Daghar denied reports that said he had escaped to Riyadh, but it was clear he could not move outside the presidential palace for fear of being targeted by STC forces.

'Everyone, including Hadi, remained silent as these militias exploited the security vacuum in Aden'

- Fahmi al-Sakkaf, a member of the Southern Movement

Qubati, who was evacuated from the Fourth Military Brigade base immediately after it was hit by the UAE air force, said he believed that the STC mission was to assassinate him, along with military leaders loyal to Hadi and the legitimate government.

Fahmi al-Sakkaf, a member of the Southern Movement since its creation in 2007 but not part of the STC, said the responsibility lies primarily with the Saudi-led coalition and Hadi.

The UAE has funded and supported the creation of armed forces that do not answer to anyone, he said, putting Aden under the control of militias. Everyone, including Hadi, remained silent as these militias exploited the security vacuum in Aden, Sakkaf said.

The STC sources, meanwhile, told Middle East Eye that it remained a strong ally of the Saudi-led coalition fighting the Houthis, noting that its offensive in Aden was a response to the Yemeni government's use of force and alleged corruption.

In light of the latest events in Aden, a political solution to the Yemeni conflict seems anything but close. While the forces loyal to the government continue to mobilise against the Houthis in Taiz - central Yemen - in Al-Jawf and Saada provinces in the north, they will now be prepared for a possible second round of battle with the STC in the south.

The Saudi-led coalition is becoming more UAE-led. The UAE has been building alliances, supporting different groups and active on the ground while Saudi Arabia seems to be in the back seat for now.

In addition to the STC, the UAE found itself a new ally in the north, none other than Tareq Mohammed Saleh, the former president's nephew. Tareq, who led the Special Forces in the past under his uncle, has now sought shelter in the south under the UAE's protection.

The UAE is attempting to build Saleh's forces again to take on the Houthis in the north.

It is highly likely that the STC will seek an alliance with Saleh, that will be backed by the UAE. In an interview with France 24, Aidarous Al-Zubaidi said on Monday that he was looking forward to assisting Saleh in his fight against the Houthis in the north.

While the government is still highly dependent on Saudi backing, with the recent events in Aden, it is clear - for the first time since the Saudi-led war on Yemen - that Saudi Arabia might not be the strong ally the government once counted on.

Meanwhile, the Houthis still do not have any real allies after they killed the former president Ali Abdullah Saleh in December. However, they are counting on further divisions on the opposing side that can eventually help ease pressure on them.

Photo: southern Yemeni separatist waves the flag of former South Yemen as he stands on a tank in the port city of Aden, Yemen January 30, 2018 (REUTERS) 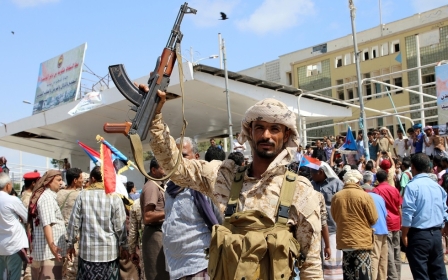 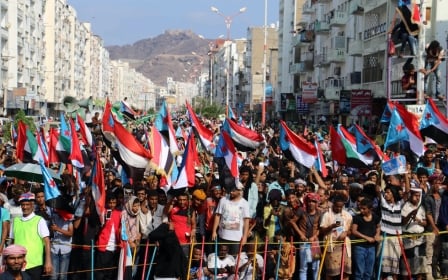