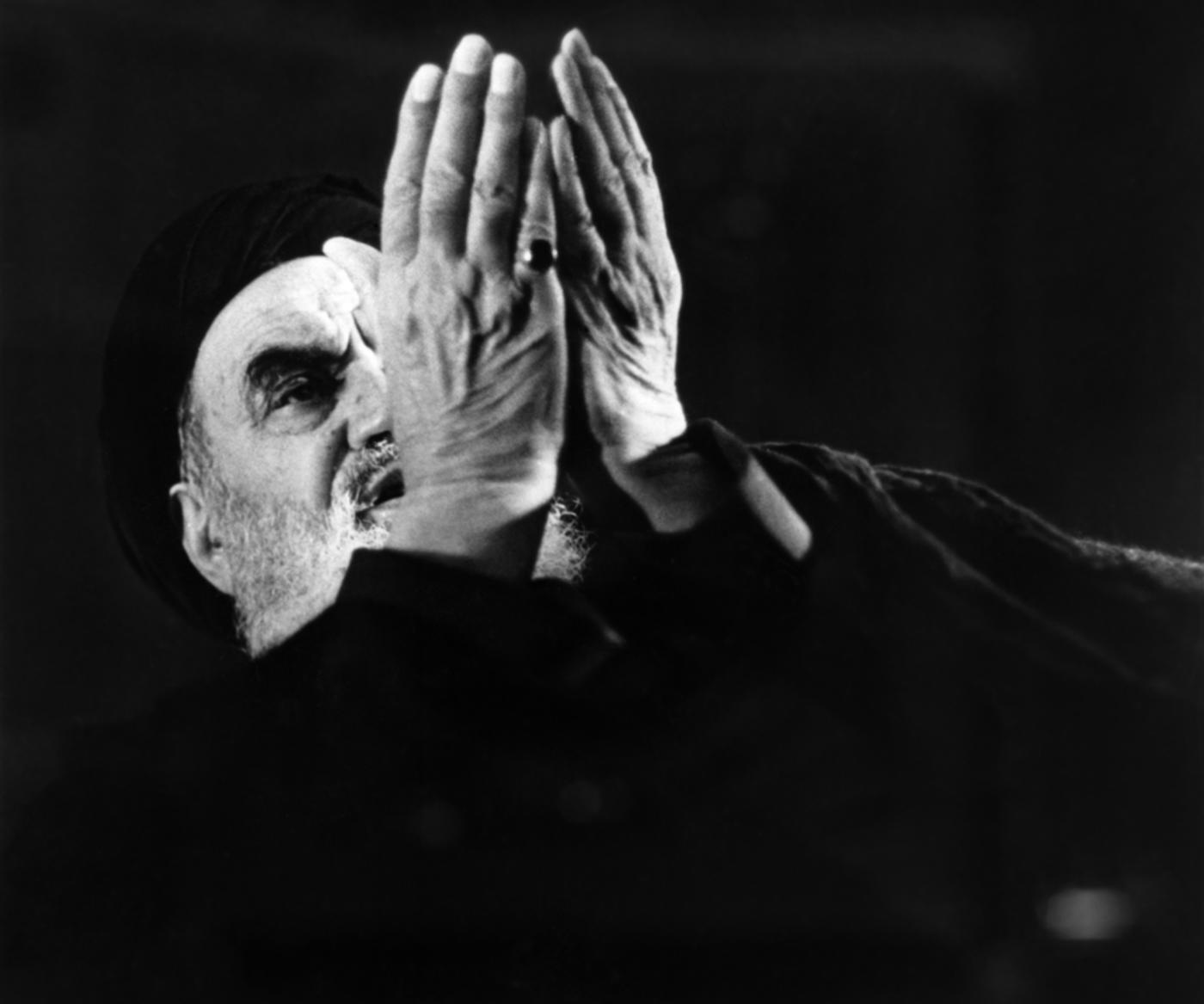 Many observers of Middle Eastern events were surprised by revelations this week that the founder of the Islamic Republic, Ruhollah Khomeini, secretly reached out to the United States for help and cooperation when he was in exile, prior to the 1979 revolution.

"Death to America" chants are still heard in Iran, and the Majlis (parliament) voted to keep that slogan last November. So you’d be forgiven for being astonished at the disclosure that Iran’s revolutionary leader was so open – albeit secretly – to engagement with the US in 1963 and 1979.

However, a more detailed look at the course of history after he took power, and indeed the path that continued even after his death in 1989, tells a different story.

Throughout the 1980s, the United States of America, the “Great Satan” and Iran’s supposed nemesis, helped to resupply and rearm Iran in its eight-year war with Iraq in what became known as the “Irangate” scandal. This may shock those who have fallen hook, line and sinker for an anti-American smokescreen that belies the fact that Iran, under the Shah prior to 1979 and under the radical mullahs after, has always tried to get in bed with “the imperialists”.

It may also surprise some that American aid to Iran during the Iran-Iraq War was facilitated by another of Iran’s arch foes – none other than Israel. Iran’s “Axis of Resistance” drivel has beguiled many who are not aware of the history of the region and who rely on the mainstream media for their information. By making a show of standing up to the West, appealing to Muslim feelings of inferiority, and blowing their trumpet every time they donate a penny to the Palestinian resistance against the Israeli occupation, Iran has masterfully deceived millions.

These days, however, the mask has fallen, the masquerade ball is winding down to a close, with each of the participants on this very international stage revealing just who they really are. Iran is not a friend to the oppressed and an enemy to the oppressor. Iran is not the saviour of Muslim dignity. Iran is not the alleviator of suffering, starvation and misery in the poorest, most bereft Muslim majority countries in the world today. Under the ayatollahs, Iran is the oppressor and a new yoke that is bearing down on the people of the Middle East, tearing apart communities through a sectarian, fundamentalist revolution that it has been bent on exporting since 1979. It is succeeding beyond all its wildest dreams, and all thanks to the West.

Five years ago, I wrote about how Iran was the West’s willing bogeyman, encouraged to gnash its teeth and nip at the heels of neighbouring Arab countries to terrify them into running to Uncle Sam for increased arms purchases and reliance on Western political and military protection. Iran was happy to do just enough to frighten them without getting too big for its boots. Indeed, in 2011, then Saudi ambassador to the US, current foreign minister Adel al-Jubeir, was saved from an Iranian assassination attempt on US soil.

Most countries would have been livid that such a thing might happen on its territory, especially the world’s only true superpower. But not America, no, and certainly not in any meaningful way. Perhaps seeing it as a case of “no harm, no foul”, the US merely issued some stern sounding statements of condemnation and support for its Saudi allies, but essentially did nothing. This was in stark contrast to how the US reacted in 1993 when it launched 23 cruise missiles to pound Baghdad after Iraq allegedly attempted to assassinate former president George Bush Snr. Why cover for Tehran, but punish Baghdad?

The theatrics continued when Iran was under sanctions due to its nuclear weapons programme. Whilst Iran’s economy undoubtedly suffered, it was the Iranian people that bore the brunt of this. The Iranian Revolutionary Guard Corps (IRGC), at once a parallel military structure and business empire, still continued to operate almost unhindered by using front operations in the UAE as well as using the puppet Iraqi government, now in thrall to the mullahs, to bypass the most severe effects of Western sanctions.

This was not merely a clever Iranian play, managing to fool the West. It is improbable that the US could not have simply deployed its significant and vast intelligence and economic warfare capabilities to make sure that Iranian fronts in Dubai would not be able to operate and that gold and the proceeds of its profits would not be laundered through Turkey. Neither Turkey nor the UAE would have done a thing to stop the US.

It is also inconceivable that the US would not have known that Iran would use Iraq to bypass the sanctions by making the Iraqi government purchase or sell whatever it needed and then simply pass it across their shared borders. After all, the US had over a decade of experience besieging Iraq itself in a brutal sanctions regime that killed over a million civilians.

Returning to the so-called Axis of Resistance, the Iranians also avoid repercussions for actions that would have led to other countries being bombed and invaded. In an interview with the Lebanese Al-Mayadeen television station, Hezbollah’s Hassan Nasrallah confirmed that Hezbollah had Iranian-supplied missiles with a 200 km range, meaning that his organisation could strike anywhere in Israel and admitting that Iran was actively supporting a terrorist group. Remember when Iraq was accused of that? The US obliterated the country, and broke Iraq’s back, yet did not so much as blink at such openly made statements by a known Iran proxy.

As the famed Arab media personality Faisal al-Kasim put it, how can a country like Iran that dubs its military operations as “Great Prophet” accept for its proxy forces in Iraq to receive air support from the “Great Satan”? Iran’s storytelling abilities are peerless. It paints a dichotomy between Islam and the West and the intractable conflict that must ensue as a result, yet is all too willing to accept help, support and succour from the West, whether in the Iran-Iraq War or now by the West ignoring everything the Iranians do. For the record, that is normal politics and Iran has to be practical and pragmatic in achieving its interests.

However, Muslims would be better off not supporting Iran as Iran misleads and lies to Muslim communities the world over who feel that the West oppresses them, exacerbates these sentiments, and creates feelings of hostility. Not only does that contribute to a more dangerous world, but it is based on the lie that Iran is against the West, when that is only the façade it puts up to draw support from grief-stricken communities.

What is even worse is that the West allows this to happen, and then gets surprised and outraged when they get attacked by terrorist groups like the so-called Islamic State (IS) that would never have existed without Iranian sectarian meddling providing the perfect breeding ground for extremism to fester. Such complicity with Iran is not only counterproductive to Western security, but also to the lives of communities throughout the Middle East that have been rent asunder by Iran’s penchant for creating problems like IS only to pose as the only solution to that problem.

It is time the West stopped colluding with Iran, and for it to act in good faith when dealing with the Arab and Islamic world. Only then can the world collectively put this plague of extremist terrorism behind us, and deal with it effectively.

Photo: Iran's Ayatollah Ruhollah Khomeini praying in Neauphle-Le-Chateau, near Paris, on 11 December, 1978, few weeks before his return to Iran from exile (AFP). 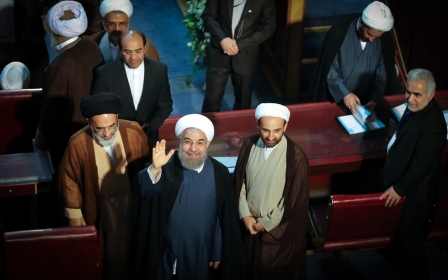 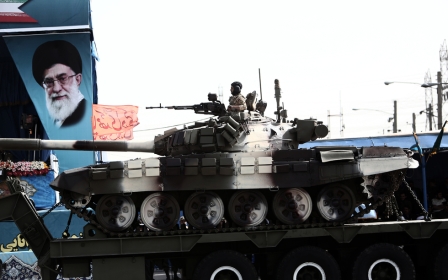