Iraq protests: There is no going back to the status quo ante 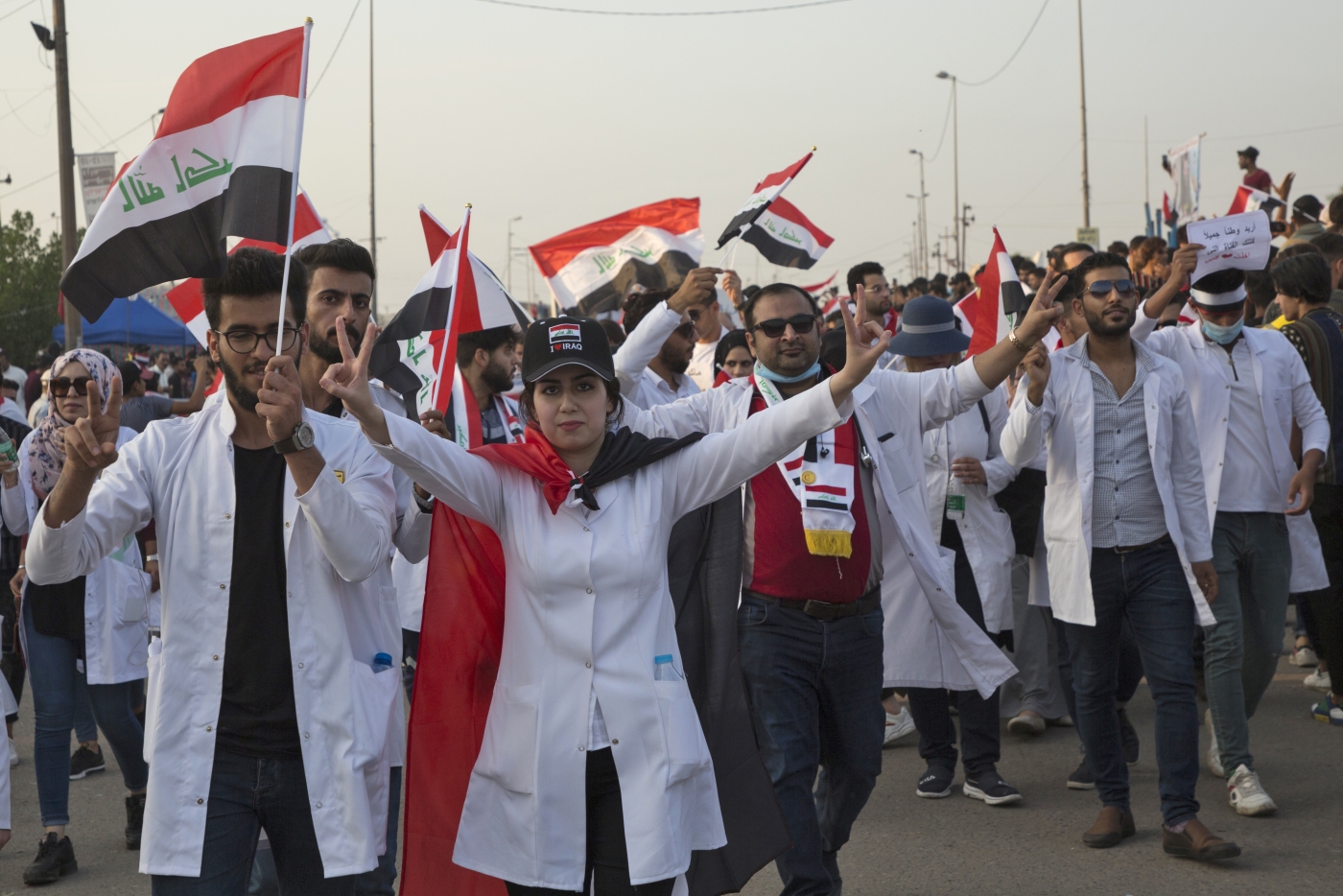 The ongoing upheaval in Iraq represents the most serious challenge yet to the post-2003 political order.

Even more than the threat of the Islamic State (IS) in 2014, the mass protests that have engulfed Baghdad and the southern governorates threaten the political edifice in its entirety.

Seldom has a political class been as devoid of merit as the one which misgoverned Iraq since 2003 and their passing, should it come about, will be mourned by no one. However, there is the pressing question of how their grip on power can be weakened and what follows in the event of their demise.

The government's response has highlighted the worst structural aspects of the Iraqi state. For one thing, the diffusion of power and the fact that the state is anything but a unitary actor have been painfully evident since the beginning of the crisis.

More tragically, the incoherence of the Iraqi state and the lack of accountability that marks political life in Iraq have had bloody consequences: over 250 fatalities and an astonishing 10,000 or so injured in the past month.

The heavy toll reflects the fear that these protests have stirred in political circles. It also reflects the diffusion of military and political power and the lack of centralised decision-making. Hence the official statements from Prime Minister Adel Abdul Mahdi regarding unknown assailants and snipers amongst the security forces – statements that underlined his impotence as commander in chief of the armed forces.

The violence also points to a routine disregard for human rights and the heavy hand with which security is approached. Incoherence is evident here as well: not all arms of the state are equally implicated in the unjustifiable and unnecessary bloodshed.

At this stage fingers are being pointed at the riot police and SWAT forces and the aforementioned "unknown elements" for the bloodshed. Social media footage shows black-clad security forces and snipers of undetermined affiliation targeting demonstrators. Worryingly, nobody can say for sure who these people are but suspicion is directed towards the array of Iran-aligned paramilitaries active in Iraq.

Meanwhile, some wings of the security establishment – elements of the Counter Terrorism Service, the police and the army – have expressed solidarity with the protests. Likewise, the crisis has highlighted the structural disarray of Iraqi governance.

Initially, some parts of the governing coalition expressed support for the protests while others maintained that they were the product of an international conspiracy aimed at destroying Iraq. However, the sheer weight, spread and momentum of the protests eventually forced the entire political spectrum to express perfunctory support for "legitimate protests".

The mixed messages are reflective of the nature of the Iraqi political system. All Iraqi governments since 2003 have been "consensus governments" that are composed of all major political actors despite contradictions, enmities and cross-purposes.

The official line nevertheless maintains that there are nefarious elements covertly working within the protests.

After each election, political office is apportioned between the major parties in a system marked by collusion with the aim of retaining power and access to state resources which are summarily pilfered through corruption and the weaving of patronage networks that span every facet of public and economic life.

This system is the target of popular rage today: it has divided Iraqis into the ruling few and those with connections to them and the vast majority of impoverished and excluded Iraqis.

However, the most glaring structural deficiency that has been thrown into relief by the current crisis is the complete detachment of the governing classes from the public mood.

The ruling oligarchy of parties does not seem to have fully appreciated the anti-systemic nature of the protests nor have they adequately grasped the determination of the protesters who have made clear that a change of faces, promises of future reform and financial handouts will not be enough to end the protests.

The disconnect between ruler and ruled is, in part, a generational issue. What passes for a populist message or an emotive cause for the ruling classes is, at best, redundant to a younger generation that came of age after 2003 and that is unmoved by references to the Baath era, political Islamism or sect-centricity. Even the imperative of "Shia rule" is no longer an emotive issue for a younger Shia public that has grown up knowing no other reality.

A clash of wills

This generation is less concerned with Shia victimhood and entitlement and more animated by rage at the systemic failures, dysfunction and criminality that have marked the post-2003 order.

Even the most hardline elements of the political elite are now voicing lip-service in support of reform. However, the fact is that any truly systemic change ultimately requires the chief beneficiaries of the political system to sacrifice a status quo that enriches and empowers them.

Waiting for such an act of political hara-kiri is futile and the protestors know it. Without genuinely threatening elite interests, there will be little incentive for change. In that regard there have been calls for a general strike and some protestors have attempted to shutdown oil facilities and the port of Umm Qasr.

The reality is that, despite the acknowledgement of popular grievances, Iraq is at a stalemated impasse marked by a clash of wills. The protests are aimed at overhauling the system while the political classes want to save it – or at least a "reformed" version of it.

The latter will try to wait the crisis out in the hope of the movement losing steam. The government feels that time is on their side: civil servants are still going to work and the silent majority may ultimately choose peace and stability over unending mass mobilisation.

For its part, the government will also try to calm the situation with a combination of carrot and stick. The carrot could be an increase in handouts combined with a repackaging of the system that alters appearances while maintaining the fundamental relations of power that underpin the current order.

The stick, already wielded with heavy-handed abandon, could, in extremis, turn into an attempt to comprehensively crush the protests – turning Tahrir into Tiananmen.

The political classes are divided and have yet to form a coherent unified response. The protesters’ maximalist demands are only hardened by the violence that has been unleashed on them and by their total lack of faith in the political classes. This is not so much a mark of intransigence as it is a reaction to the unresponsiveness of successive Iraqi governments all of which have been composed of the same oligarchy of parties and personalities.

Since 2011, and more so since 2015, Iraq has seen near-yearly protests that are routinely met with promises of reform only for business-as-usual to continue.

Herein lies the root of the impasse: there is no official political opposition that can take up the mantle of reform and the political classes lack the requisite credibility to convince the protestors that they will enact meaningful change. That leaves two opposing sides and the political system: one side wants to save it, the other wants to overhaul it.

Iraqi social media is full of suggested roadmaps for reform and the political classes have, in some cases, begun using the same vocabulary and suggestions in their public statements. With only slight differences most such roadmaps revolve around a number of common points: the government resigns, parliament is dissolved and a reduced caretaker government is formed composed of independent technocrats who are not to run in future elections. The caretaker government would be tasked with the formation of an independent committee to oversee constitutional reform and the writing of new election and party laws.

A new independent electoral commission would be formed and the system changed to a presidential one. This would all happen in the space of a year after which general elections are to be held under UN supervision with an eye to birthing a new political order that allows for new entrants beyond the ruling party oligarchy. A version of this roadmap was printed in Tuk Tuk, the protest movement’s first publication.

As ever, the devil is in the details. How are these committees to be formed? Who will appoint them? How can a temporary government or reform committees be constituted whilst bypassing the ruling oligarchy and shielding reform structures from their interference?

The public mood will understandably scoff at the thought of the political classes forming the committees tasked with the termination of their own political hegemony. Further, until the protest movement yields political organisations, the electoral alternatives to the ruling parties will remain unclear.

Calls for independents and professionals to oversee reform committees and the like must outline the mechanisms for how such people are to be selected and empowered. Many protesters would be allergic to the ruling oligarchy’s involvement in reform initiatives and would regard the political classes and reform as mutually exclusive.

Nevertheless, it remains unclear how reform bodies can be formed and staffed while excluding the establishment parties who will undoubtedly cite constitutional and electoral factors to justify their position.

How this battle of wills ends is difficult to predict. Those hoping for a collapse of the order should be careful what they wish for. Unlikely as it is, a total collapse would be as calamitous as the last time the state collapsed 16 years ago. As for those anticipating an imminent climax, they may have to wait a while longer.

Further, if change is on the horizon, what is less certain is the nature and extent of that change and the costs that will be incurred along the way. One scenario is for the protests to continue for months and in time they may produce political organisations that can better mediate the tug of war between the street and the establishment. There is no going back to the status quo ante but systemic collapse likewise remains unlikely.

Iraq may well be in for a prolonged contestation over the contours of a modified version of the system. One can only hope that, in such a scenario, what emerges is a framework that is more responsive to, and representative of, the Iraqi public. The alternative, a victory for the forces of repression, would likely see the emergence of a decidedly more authoritarian order.

One thing that is certain is that, no matter the resilience of the protestors, the beneficiaries and supporters of the state will not pack their bags and leave anytime soon.

As one public figure affiliated with the al-Hashd al-Shaabi (Popular Mobilisation Units) bluntly put it: “Do they really think that we would hand over a state, an economy, one that we have built over 15 years? That they can just casually come and take it? Impossible! This is a state that was built with blood.”