Israel annexation plan: The world is more than just a silent partner

Orly Noy
Preventing annexation would mark a small victory, but a far more meaningful goal is to end the ongoing oppression of Palestinians There is no annexation happening, at least not yet - although Israel’s brutal control over the Palestinian territories is certainly still happening.

It is hard to know if or when annexation will reappear on the agenda as a substantive possibility. Like everything else under Netanyahu’s rule, this subject is exclusively linked with the political interests of a prime minister under investigation. When it serves him politically, annexation will be back on the table.

The logic of Zionism

Meanwhile, let’s remember that even if the timing and dimensions of annexation are bound up with Netanyahu’s interests, its internal logic derives from the internal logic of Zionism itself.

It’s only natural that a regime built on settler-colonialism and an ideology of Jewish supremacy dating back 72 years, and operating for more than half a century via direct military control over Palestinians who have been stripped of any rights whatever, will seek to move from de facto control to de jure sovereignty.

The Israeli government is openly admitting that from its standpoint, the occupation is not temporary, and it intends to make the situation permanent by force of law

The more optimistic among us may be encouraged by the international community’s stated consensus opposing “unilateral annexation”.

Realists will laugh bitterly. Since when has the matter of reciprocity in regards to this conflict ever bothered the rest of the world? When did Palestinians ever agree to this aggressive occupation, as a prequel to the world’s current expressed interest in the Palestinian position on the institutionalisation of plunder via annexation?

There’s an old Jewish folk tale about a Jewish villager who complains to the local rabbi of the terrible overcrowding he and his family must bear in their small house. The rabbi instructs the man to go home and bring the family goat into the house, and the astonished man does as instructed.

The next day he is back, complaining more vocally that the little house is more crowded than ever. The rabbi tells him to go put the family’s chickens into the house, too. Despairing, the Jewish villager again obeys.

The next day, he is back to complain tearfully to the rabbi that life in the house has become insufferable. “Now,” says the rabbi, “take the chickens back outside, and don’t forget the goat.” The next day, the grateful villager is back with his report: “How spacious the house is now!”

International opposition to annexation is not without importance. East Jerusalem demonstrates well enough the significance of imposing Israeli sovereignty over a Palestinian population lacking any operative rights of citizenship. But if the international community doesn’t perceive a deafening wakeup call in Israel’s official declaration of its intention to annex parts of the West Bank, the annexation issue will become like the goat in the old folk tale.

The world must not allow this matter of annexation to distract its attention from Israel’s occupation of the West Bank, East Jerusalem and the Golan Heights, the siege of Gaza, or the supremacist Jewish regime within the 1948 boundaries of Israel. Even if the whole annexation business goes into the deep freeze now due to political considerations, the international community cannot ignore two crucial points.

Firstly, the international community bears direct responsibility for the continuing occupation of the Palestinian territories. It has refrained from any trenchant criticism of Israel, colluded in silencing any opposition as “antisemitism”, and refused to impose the harsh political and economic sanctions that Israel’s policies should have triggered.

Moreover, the international community is not just a silent partner in the occupation; it is an active, full partner via an abundance of profitable economic, military and political projects - all of which serve to intensify the violent oppression of the Palestinian people.

Secondly, Israel has thus far managed to evade the judgment of international tribunals by claiming that the occupation is temporary. Now there can be no more doubt: the Israeli government is openly admitting that from its standpoint, the occupation is not temporary, and it intends to make the situation permanent by force of law.

Indeed, by declaring its intention to annex, Israel is admitting that the situation to which it aspires is officially apartheid. It intends that two separate legal systems will govern two different populations within the same area, based on ethnonational origin, as a permanent arrangement. This is precisely the definition of apartheid.

The situation in the occupied territories is already such that an Israeli settler and a Palestinian resident who commit identical violations of the law, on the same square metre of land, will be tried in two separate courts under different laws.

While the world has thus far been comfortable averting its gaze from this de facto apartheid, the declaration of annexation should force it to look - to see - and to speak out. Israel is now officially admitting that it has no intention of ending the occupation. Does the world really need a more resounding wakeup call than that, in order to impose long-overdue sanctions?

The world can argue that annexation is more dangerous because it precludes a two-state solution. This is, at best, disingenuous. Israel did not need annexation in order to kill the two-state solution by dictating very dramatic facts on the ground, with the support of the same international community that now voices such outrage.

Every Palestinian community expelled by Israel in its ongoing ethnic cleansing of the West Bank, every settlement established without an international response, every Palestinian family evicted from their home in East Jerusalem so that a Jewish settler family could live there instead: each of these was another nail in the coffin of a two-state solution, while the rest of the world looked the other way.

Preventing this annexation would be a small act of political and moral opposition by the international community. A much more meaningful and acutely important mission would be to end the occupation, the oppression and the outright theft that continue unabated on a daily basis, with or without annexation.

It’s past time to stop hiding behind convenient excuses. Annexation is just that goat in the yard, nothing more. 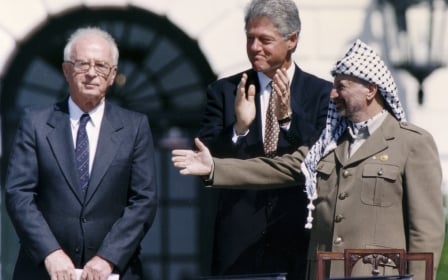