Peter Oborne
When I visited last month, it was clear that Israel was slowly usurping Wafq's authority over the sacred site 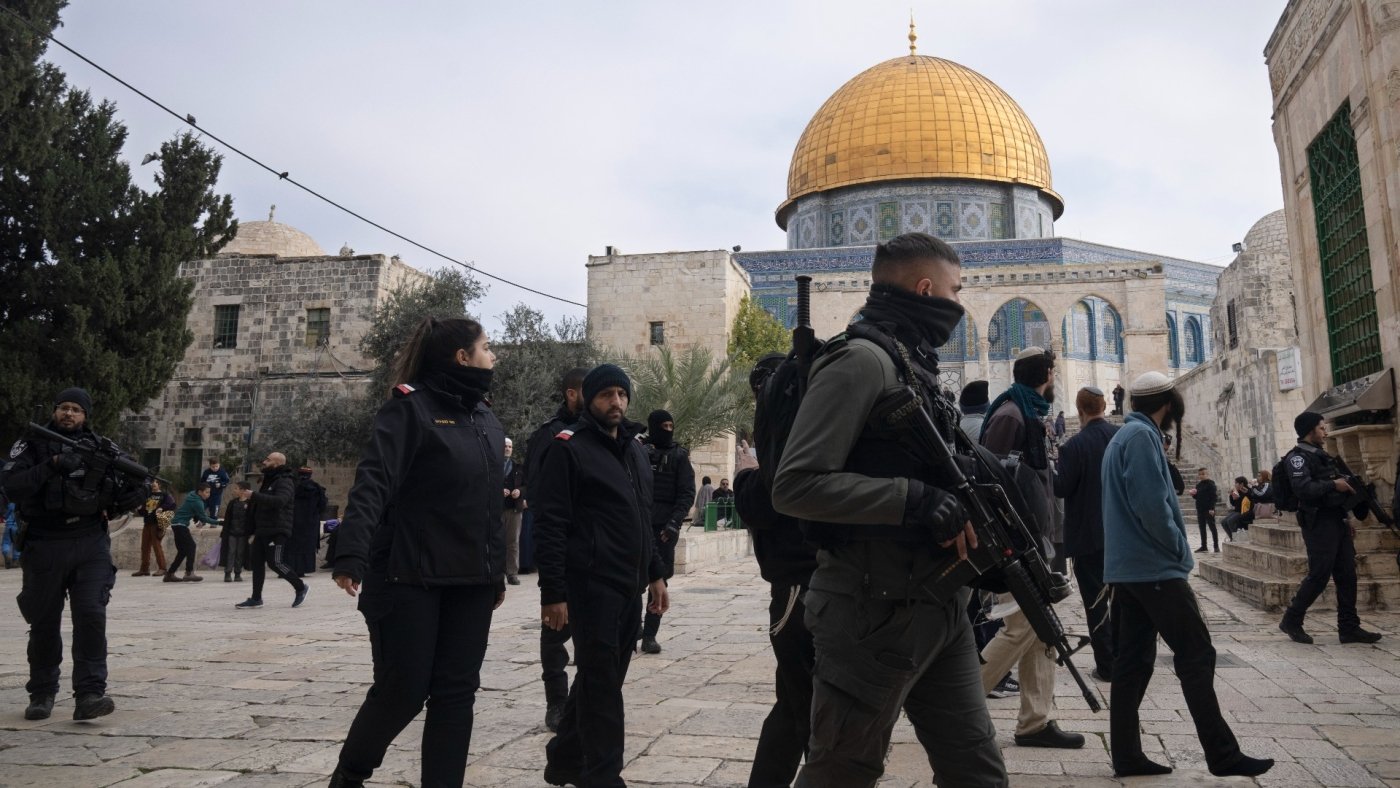 Israeli police escort Jewish settlers to the Al-Aqsa Mosque in the Old City of Jerusalem on 3 January, 2023 (AP)

Itamar Ben-Gvir, the Israeli far-right politician and leader of the Jewish Power party, has visited Al-Aqsa Mosque's courtyards many times before. But never as a minister in the Israeli government.

That is what made Tuesday's visit from the country’s new security chief pregnant with danger.

It sent out the signal that elements within Israel's government are determined to smash the historic status quo arrangements which have kept peace, one way or another, for centuries. With calamitous consequences.

The status quo arrangements are the set of understandings which have allowed the three great religions to maintain a relative peace. They were formalised in the Treaty of Berlin, signed between the Ottoman empire and the European great powers in 1878.

And with the fall of the Ottoman empire after the First World War, the Hashemite dynasty took over as custodian of Al-Aqsa Mosque. The current custodian is Jordan’s King Abdullah II.

The agreement stipulates that only Muslims are allowed to pray in al-Aqsa while non-Muslims are allowed to visit al-Aqsa under the supervision of the Waqf, a joint Jordanian-Palestinian Islamic trust that manages the affairs of the mosque. Jews, according to this understanding, can perform prayer by the Buraq Wall, or what is known in English as the Western Wall. Meanwhile, Israeli authorities retain security control over the mosque.

In the past, senior Israeli politicians (and Israeli security services) understood the need to preserve the status quo - after Israel conquered Jerusalem in 1967, then defence minister Moshe Dayan ordered Jewish intruders off Al-Aqsa and handed back the keys to the Waqf.

The same applies to the religious establishment. The chief rabbinate of Israel made it clear that Jews should not visit "the Temple Mount" - or what Muslims call al-Haram al-Sharif- because its sacred status meant it was impious to do so.

However, over the years Israel has ignored this delicate arrangement and bypassed the Waqf. Israeli forces, religious Jews and high-profile far-right politicians have repeatedly raided the mosque, and since 2017 the incursions became organised daily tours.

In the history of Israel, several politicians have seen fit to jeopardise the status quo, but only two stood out.

The first was Ariel Sharon. In September 2000 (and still in opposition) he stormed the courtyard in the company of six Knesset members and 1,000 Israeli police. 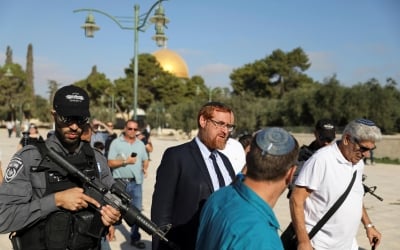 This event was shocking. It was seen by the Palestinians as highly provocative and insensitive to the sanctity of the mosque. It sparked the Second Intifada, the uprising that left 3,000 Palestinians and 1,000 Israelis dead. For three years, access was restricted for Muslims and non-Muslims alike.

When Sharon was elected prime minister, he reopened Al-Aqsa for Jewish visitors as well as Muslims. Since then, the status quo agreement has steadily been undermined, as I saw for myself when I visited Al-Aqsa last month.

In theory, under the agreement, Jordan has total control within the confines of the mosque complex. In practice, Israeli security forces were ubiquitous, with an office actually inside the courtyard just north of the Dome of the Rock, and a platoon stationed opposite the front of the mosque. I guess there were about 40 police or soldiers within Al-Aqsa.

Two soldiers were carrying machine guns and equipped with what appeared to be gas canisters. I approached and asked what they were doing. ”We are just here to protect,” replied one. "Very specifically we are protecting religious Jews. The Muslims are unhappy when they come in."

Did they ever use their weapons? "We don’t, except occasionally," replied the soldier, who answered all my questions. How many security forces are in the courtyard? "There are about 35 to 50 here today."

Nearby, a group of about 20 religious Jews was entering the courtyard from the southwest, moving uncertainly, looking up frequently at the Dome of the Rock. I introduced myself and asked what they were doing. A young man called Joshua with a ginger beard replied: "Up there is the Temple Mount. It was the site of a Jewish temple. We’re hopeful that one day there will be another temple."

Over the last two decades, the status quo has been steadily undermined. The so-called 'Temple Mount' Jewish groups now demand access to the holy site, and their incursions, happening on an almost daily basis now and protected by the Israeli police, are in flagrant breach of the status quo and a cause of tension in East Jerusalem and beyond.

To the Palestinians, Ben-Gvir's visit is the culmination of a decades-old strategy by the Israeli state and right-wing groups to "Judaise" the city and rid it of its native Palestinian heritage.

They [Israeli forces] shot Waqf guards [with rubber bullets] who were not doing anything. Two of them in the eye. That cannot be random

One official from the Waqf, the trust that administers Al-Aqsa, told me that "Israel is slowly pulling the authority from the Waqf." He gave examples. “You have to inform the Israeli authorities if you want to do a paint job. In one recent case, an engineer went to the eastern part of the mosque with a plumber to change a rusty water pipe. The police told him to stop and to ask permission. That engineer and plumber have been detained tens of times.

"Right now we want to deal with some loose old stones on a few pathways.” The Israeli authorities will not allow them to use cement to solve the problem. Meanwhile, he said, Israel itself continues with archaeological excavations and has attempted to build at least 20 tunnels under the mosque.

The official also told me: "They arrest the Waqf guards all the time. If they object to the settlers coming in. If they walk close to the settlers. They shot Waqf guards [with rubber bullets] who were not doing anything. Two of them in the eye. That cannot be random.

"A friend of mine was coming out of the mosque into the courtyard outside the southern mosque building. He was holding hands with each of his two children. They shot him with a rubber bullet in the chest. He was doing nothing. He was taken to hospital."

I asked him to elaborate. He replied: "The Palestinians were protesting against the occupation nearby.” He said that some religious Jews entering Al-Aqsa carried the Israeli flag or sang the national anthem. Others openly said Jewish prayers.

“There was a time security would drag them outside," he said. "Not anymore."

Israeli forces are in full control of the Moroccan gate (Bab al-Magheriba) through which non-Muslims enter, meaning that Waqf guards have no authority to prevent the Israeli military from entering the site: this is a blatant breach of the status quo.

Israeli raids on al-Aqsa Mosque date from 1967 when it occupied the eastern section of the city, along with the West Bank and the Gaza Strip. 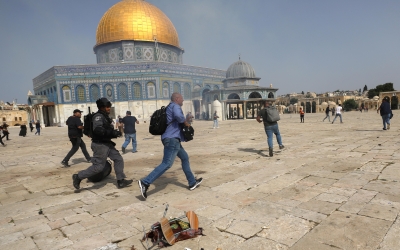 In recent years, Israeli forces have assaulted Al-Aqsa on several occasions, with the police storming the al-Qibli prayer hall and attacking worshippers: another serious breach of the status quo agreement. According to one senior Jordanian official: "Israel increasingly relates to Arabs as tenants who will ultimately be evicted, instead of as rightful neighbours."

Before I left, I attended the offices of the Waqf to interview Sheikh Azzam al-Khatib, director of the Islamic Waqf (Religious Endowment) and Al-Aqsa Affairs in Jerusalem. Soldiers stopped me at the gate, then waved me through once an official came down to meet me. Khatib, a powerfully built man in a dark suit, said: “Fifteen hundred years we have been praying at Al-Aqsa.”

He told me: "Israel is working seriously to change the historical status quo. It is preventing the work of the mosque. There are many security barriers on the perimeters. Israeli security forces are all over Al-Aqsa and all over the courtyard. They can prevent anyone they want from entering. They detain Muslims. They have stopped more than 20 major projects.

"Al-Aqsa has been grabbed by an iron fist," Khatib continued: "Here in Jerusalem we rely on the custodianship of King Abdullah. This place is part and parcel of Islamic theology and belief. It represents the faith of nearly two billion Muslims. King Abdullah and all Hashemites are descendants of the prophet. They will never allow Israel or anyone else to control the mosque.

"God forbid if Israel changes the status quo. That would lead to a religious war that would extend far beyond Al-Aqsa Mosque." 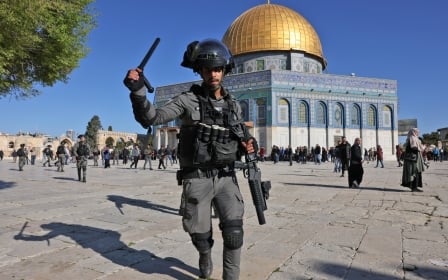 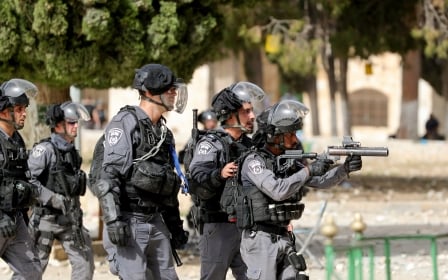 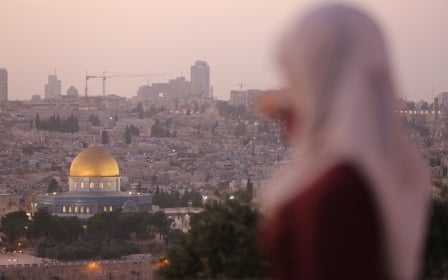