Zionists only: The basic flaw of Israel's new protests against judicial power grab

Gideon Levy
Demonstrations over the judicial system are theoretically good news - but their Zionist character excludes the very issue driving them: occupation 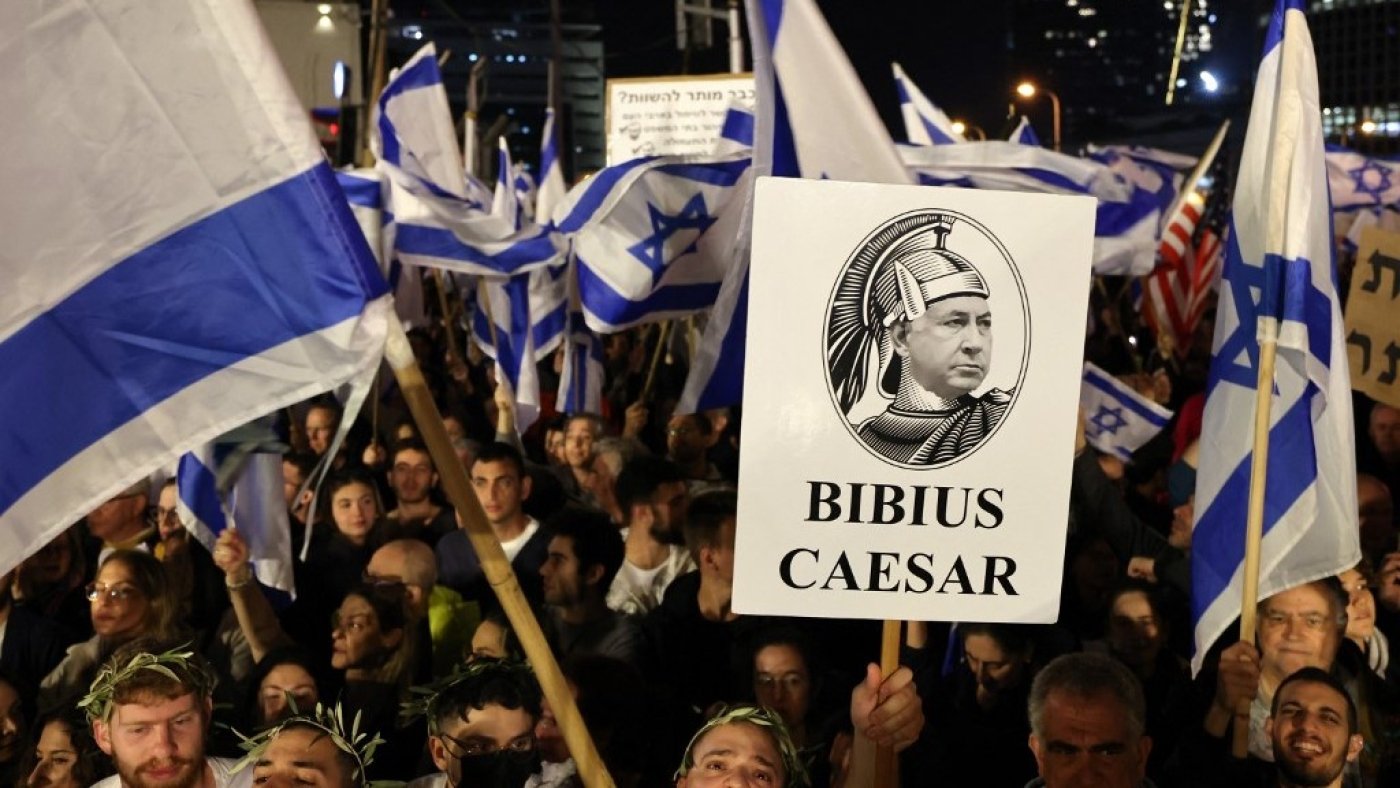 The centre-left in Israel has come back to life after years of indifference, filling city streets - notably in Tel Aviv - with crowds of protesters. For the last three weekends in a row, multitudes have taken to the streets in increasing numbers, with more than 100,000 demonstrating in Tel Aviv alone this past Saturday.

The new government in Israel, the most far-right and ultra-religious in the country’s history, has managed in just a few days to terrify supporters of the opposition - and many Israelis have shown up in person to prove it.

Theoretically, this is very good news. Among the more serious maladies affecting Israeli society in recent years has been the public’s indifference to nearly anything not strictly a private matter, alongside mass denial, repression and self-deception.

Israelis have mostly seemed to ignore the elephants in the room, chief among them the occupation elephant

Thus, the city square in Tel Aviv became crowded again - the same streets that in 1982 overflowed with an estimated 400,000 Israelis protesting against the massacre of Palestinians in Lebanon’s Sabra neighbourhood and Shatila refugee camp - a massacre on Israel’s watch. Afterwards, the streets were quiet again for decades.

After the 1982 protest, which at the time was the largest in Israel’s history, the country seemed to go into hibernation. It woke up again in 2011 for a few weeks, with the eruption of social protests against the cost of living - but that eruption rapidly subsided, leaving almost no traces.

In subsequent years, Israel’s repeated attacks on Gaza, costing the lives of thousands of residents, including hundreds of children; the ongoing occupation; and even the spiralling cost of living have failed to provoke any real protests. Israelis have mostly seemed to ignore the elephants in the room, chief among them the occupation elephant - as if ignoring them could make them disappear.

All that changed the day after the latest national election, when it became clear that Benjamin Netanyahu was not only returning as prime minister, but would head a radical government in which he would be the left-liberal marker.

Figures from the extreme rightist settler camp, marginal just a day earlier, were named to key ministerial posts, while some of the ruling Likud players appointed as ministers came from their party’s radical right wing. This terrifying new reality, accompanied by a media campaign of intimidation, fell like a thunderclap on the previously indifferent centre-left camp, which was finally aroused to civic action.

The recent mass demonstrations are the first chapter in the resulting protest movement, and organisers are threatening escalation into broader civil unrest, including strikes. Yet, it is not the dimensions of the protests, nor their character, that should worry every lover of democracy in Israel and abroad, but rather their content.

The current wave of protests erupted after Israel’s new justice minister, Likud’s Yariv Levin, announced plans for an overhaul of the justice system. Levin’s programme should indeed evoke concern: it would transfer nearly all powers to the executive branch and almost totally neutralise judicial authority and independence. Israel under this new programme would no longer have three independent and mutually balanced authorities, as ought to be the case in a democracy.

Instead, it would have one all-powerful authority, the executive branch, that controls the legislature thanks to the coalition’s majority, and would now also control the judicial system.

Israel, a country with no constitution and no democratic tradition, is liable to become an autocracy. The danger is clear and tangible. Protesting it is a necessity. Minorities, the weak and the oppressed would be left with no protections whatsoever against the recklessness of the majority.

The justice system would be repainted in bold political colours, with its judges obliged to bow before the politicians who appoint them. That is a very good reason indeed for vehement protest.

The demonstrations, however, immediately took on the typical character of Zionist leftist protests in Israel over the generations. After a few Palestinian flags were waved during the first demonstration, organisers rushed to renounce any Palestinian presence at the protests, flooding them with thousands of Israeli flags.

A demonstration for equality turned into an all-Jewish, Zionist demonstration advocating for Jewish supremacy in Israel. Once again, demonstrators said: don’t bother us about the occupation. We are dealing here with the judicial system; let’s not confuse the issues - as if the occupation does not overshadow everything and define the Israeli regime more than any of its other components. 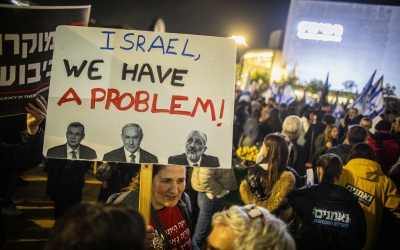 Thus, the moral basis for these protests was abandoned. Neither Palestinians nor Jewish Israeli opponents of the occupation felt wanted there.

The hypocrisy and double standards of the Zionist left were once again revealed in all their ugliness. The protests were being reserved for Jews only, ignoring the occupation entirely. In other words, the looming danger to democracy in Israel, from the standpoint of the centre-left, is solely that of the new justice minister’s reform programme - without which Israel, in their view, remains a liberal democracy.

This is the mother of all lies that Israelis tell themselves and the world. Their country is one under whose rule live nearly seven million Jews and seven million Palestinians between the Jordan River and the Mediterranean Sea - and it boasts three separate justice systems: democracy for Jews, an oppressive regime for Palestinian citizens of Israel, and military tyranny for residents of the occupied territories.

This country continues to pretend to be a liberal democracy, which only the proposed judicial reforms announced by the new justice minister would transform into a dictatorship.

The current protests are thus intended to defend only the rights of Israel’s already privileged Jewish citizens, while ignoring the rights of the oppressed who lack citizenship and civil rights. The thousands of Israeli flags waved by protesters symbolise what is bad about these demonstrations: They are intended for Jews only.

No decent Palestinian, whether a citizen of the state or not, can join a protest whose flag is the flag of the Israeli occupation, and that forbids raising the flag of the Palestinian people. Once again, it has become clear than when it comes to the foundational issue of the character of the state and its relationship with the occupation, the difference between Israel’s right and left is much smaller than it might seem.

A uni-national protest in a binational state is not a democratic protest. Words of caution about expressions of opposition to the occupation at these demonstrations are meant to gloss over the reality and push it out of sight.

Long before Levin’s "reform" programme or Netanyahu’s sixth round as prime minister, despite his ongoing corruption case, Israel could not be considered a nation of law and democracy precisely because of the news from which it tries to run away: it is an occupying nation. And from the day it became clear that the Israeli occupation was not temporary, there has been no evident intention to end it - nor apparently has there ever been, because then Israel would clearly be an apartheid state.

If the military occupation is not temporary, it is not a military occupation. It is part of the state, which becomes an apartheid regime. A protest that ignores this would be like a protest on board the Titanic that focused exclusively on the quality of the music and drinks, while ignoring the calamitous route along which the ship was sailing. 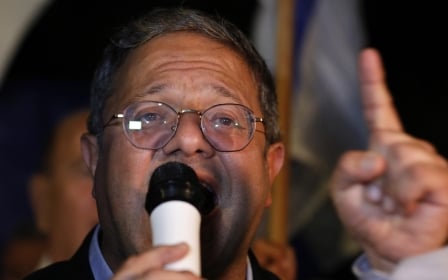 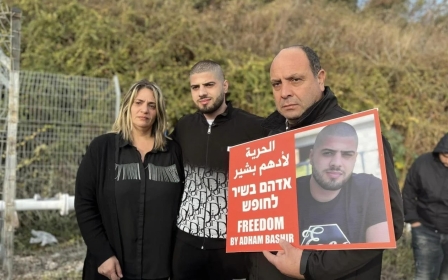 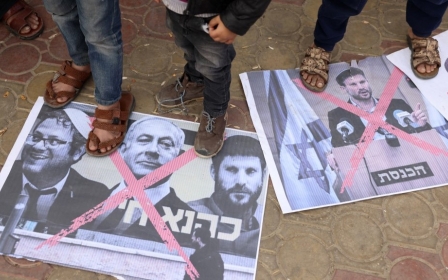