Kurds are paying the price of Turkey's post-coup crackdown 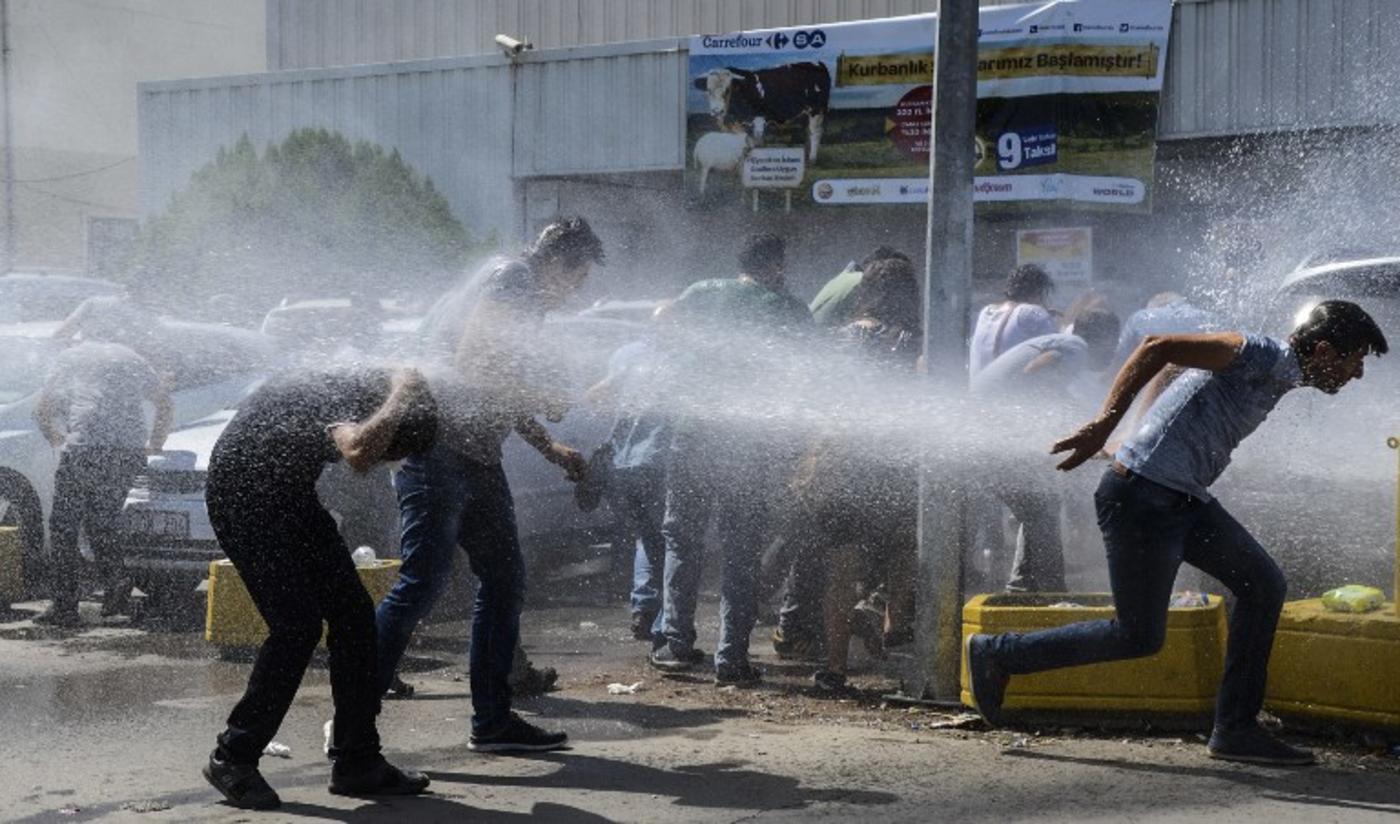 The biggest story in Turkey today is the state’s quest to save democracy from the enemies that threaten to take it down through continuing coup plots.

After the 15 July coup, most Turkish parties backed the government’s struggle against the putschists but were worried about the rule of law and democracy. Their words of caution on the dawn of the coup were prescient: recent government decrees issued under the state of emergency - from the arrest of Kurdish journalists to the purge of Kurdish teachers to the sacking Kurdish mayors (and likely soon the deposition of Kurdish deputies) - have pushed democracy to its limits and will mark a new era in the state’s relationship with the Kurds.

While we will never know what a successful coup would have ushered in this July, previous coups in Turkey have shown that it would have enabled the new regime to crack down on dissenters. Indeed, all of the previous juntas that came to power in Turkey through a coup have done so under the banner of reinstating order.

But as it is, this new government offensive against Kurdish politics isn’t any different from what a military junta would have done.

Since the failed coup, Ankara has largely brushed the rule of law aside to rule by decree, authorised under the state of emergency to restore order to the country.

The decrees allow the executive to bypass complex legal and bureaucratic restrictions established to check and challenge its power. They can even constrain individual rights and liberties without consequence, and are immune from the European Convention of Human Rights, to which Turkey is a signatory country.

Taking advantage of the coup-fighting prerogative, Ankara has circulated the narrative that coup plotters, largely driven by Muslim cleric Fethullah Gulen, collaborated with the Kurdistan Worker’s Party (PKK) insurgency to take down the government.

After the PKK peace with the government collapsed last year, the ruling AK Party escalated operations against the insurgency in the name of counterterrorism. Now the unchecked executive powers, bolstered by the coup conspiracy theory, are expediting the government campaign not only against the PKK armed militants, but against any Kurdish political movement.

If the break in the ceasefire didn't already blow the cover off of the AK Party’s widely hailed progress in Kurdish relations, last week’s move to depose elected mayors and impinge on their democratic rule was a provocation against the Kurdish political project as a whole.

Despite being cities with long traditions of vibrant Kurdish political activity and high voter turnout in local elections, the new mayors were appointed directly by the interior ministry - without judicial oversight - and mostly came from the central governorates, which were already hand-picked by the ministry.

The Ministry of Interior seized control of 28 elected municipalities, mostly run by the Kurdish Democratic Regions Party, in the name of saving democracy

The municipalities targeted have been among the most open in threatening the central government’s monopoly on power, an autonomous periphery being a core Kurdish political tenet. Kurdish parties have thus consistently won control of municipalities, which pressed for more power over centrally appointed governorates - a key issue negotiated during the 2013 and 2014 peace process.

While leaving the municipal structures intact, aware of the Kurdish goal to eventually make them autonomous, the state periodically has tried to repress elected mayors with the various political and military tools available to them.

In the past, military coups deposed elected officials; they removed and replaced mayors with direct appointments indiscriminately, especially after the 1980 coup.

But today is the first time that we have seen such anti-democratic appointments carried out under the rule of an elected government, particularly targeting Kurdish municipalities. The provocation has been ringing loudly across the southeast, sparking protests and intense organising in the absence of political and judicial recourse.

States of emergency are not new to the Kurds. A state of emergency was declared in 13 Kurdish cities in 1987 and, several times after, opening the doors to extrajudicial execution, torture and other human rights violations. These tactics were usually applied by the military and state-affiliated paramilitary groups under the supervision of regional governorates in response to PKK violence.

In its defence, past governments would claim that they protected Kurdish people’s political rights - including electing their deputies and mayors and having the freedom to hold public office - and deny accusations that the state was restrictive in any way or that there existed a “Kurdish issue” at all. This reasoning was repeated throughout the AK Party’s rule, despite continuous rights violations and threats to the rule of law.

But the recent decrees have exposed the state’s contradictions to the point that its explanation no longer rings true. The state is undermining its own defence of opposing rights violations, leaving it little ground in the public trial of international opinion.

The prime minister himself could not hide the fact that the state of emergency is being used to remove opposition in a way that has nothing to do with fighting coups and terrorism.

After the 15 July coup, the Ministry of National Education suspended 11,285 teachers from their duties, after Prime Minister Binali Yildirim made a statement claiming that they had detected 14,000 PKK-affiliate teachers, mostly from Kurdish cities. But Yildirim also acknowledged that he did not know exactly how many of them are directly linked to the PKK.

While the purge was conducted through the Ministry of Education, meaning the teachers’ destiny will be determined in the courts, the move signalled that the government’s target goes beyond the PKK to the younger Kurdish generation.

By undermining the Kurds’ self-determination through the classroom, their right to challenge the state in the courts and their ability to elect their own politicians, Turkey is forcing the Kurds to respond through other means to reclaim any ground they so precipitously lost.

The government's fever of harnessing all the power it can has blinded it to the fact that the antidote to a coup is democracy.

As Turkey continues to issue emergency decrees, it will continue to disproportionately target the Kurds. Its fever of harnessing all the power it can has blinded it to the fact that the antidote to a coup is democracy.

When the AK Party came to power, it launched a democratisation programme which had been discarded by earlier Turkish governments. But recently, the AK government has moved far away from these earlier democratic expectations. By doing so, the government actually created the groundwork in favour of the military coup.

Indeed, the PKK’s jailed leader Abdullah Ocalan warned Erdogan about a military coup in November 2014, saying that “... if the process ends, the mechanics of coup would step in and he would end up just like Morsi of Egypt.”

Ocalan, deprived of contact with his family and attorneys, met his brother a few days ago, and called on the state to start a new phase of talks in order to stop the war. But the state disregarded this call. If these anti-democratic policies continue, the result may not be another coup, but will certainly mean more years of political violence and terror.

Photo: Turkish police uses water cannon against teachers in Diyarbakir on 9 September 2016 during a protest against the suspension of over 10,000 teachers for suspected links to militants (AFP) 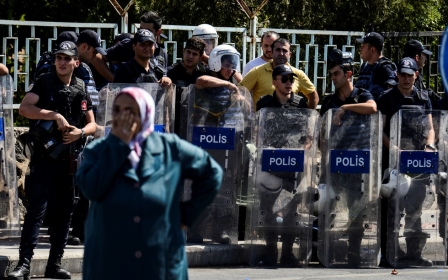 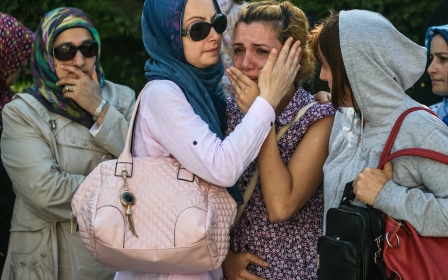 Turkey At War
Terrorism against Turkey is not new. Western hypocrisy is even older
Taha Ozhan 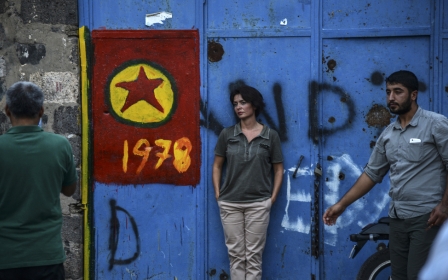