The new ‘two-state solution’ that will colonise Palestine 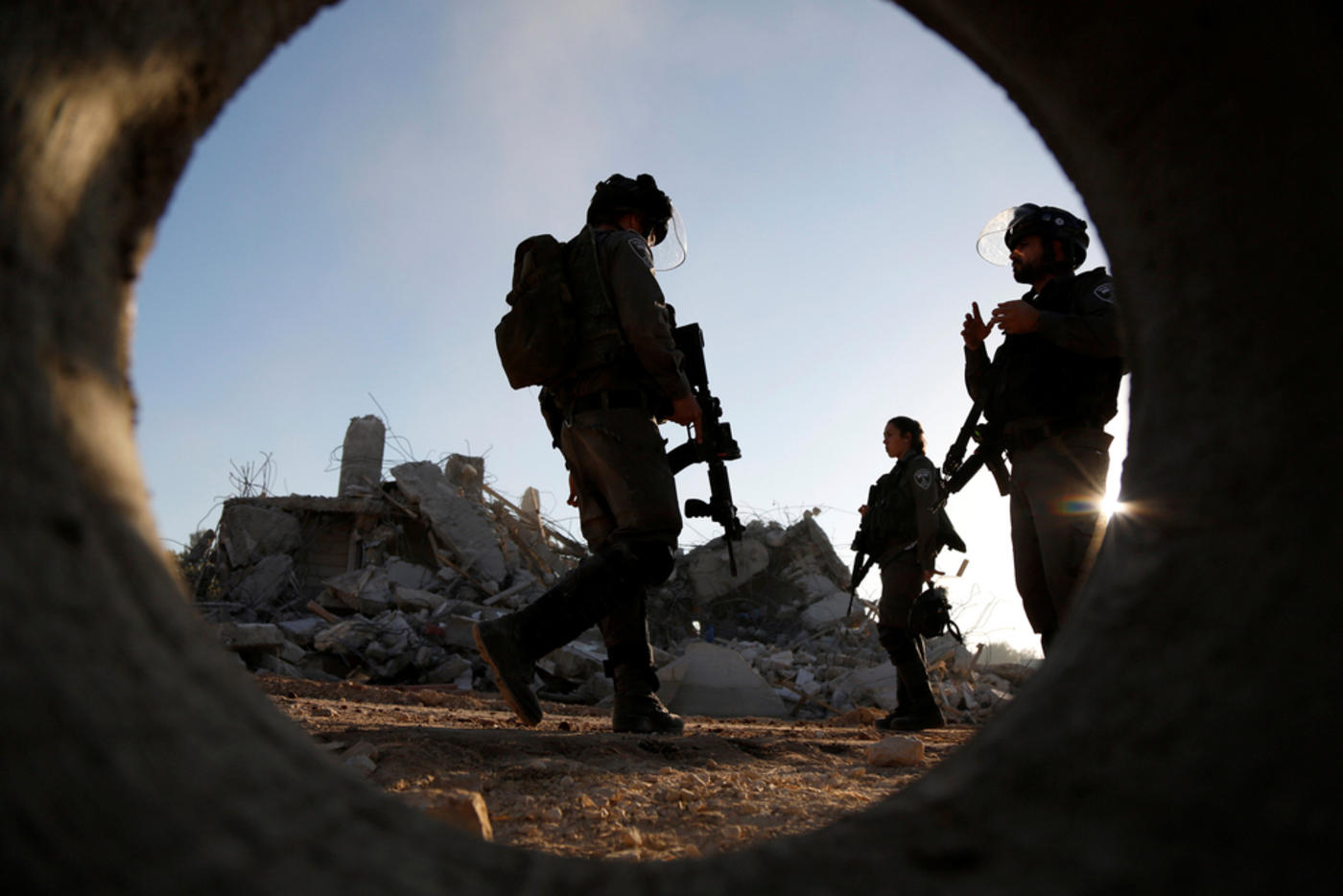 A powerful pro-Israel policy group with ties to the Obama administration and the Israeli military intelligence establishment is promoting plans for a "two-state solution" that would subordinate Palestinians to Israeli military rule, supervised by a permanent US military presence.

The plans have been put together by the Israel Policy Forum (IPF), a New York-based advocacy group founded in 1993 at the behest of Prime Minister Yitzhak Rabin, to promote the Oslo peace process. Shortly after taking office in 2009, President Obama adopted the IPF’s Middle East “roadmap".

Among the plan’s recommendations are the complete demilitarisation of Palestine despite it being defined as a "sovereign" territory, a comprehensive border surveillance infrastructure, and a permanent US military operation to police the Jordan River.

The Forum’s "Two State Security" project has commissioned Commanders for Israeli Security (CIS) – a network of over 200 former senior Israel military and intelligence officials – and the Center for a New American Security (CNAS) in Washington DC, to produce studies on a two-state solution.

The CNAS report, published in May, describes itself as the “product” of “numerous consultations  and workshops with former and current Israeli, Palestinian, Jordanian and American security officials and negotiators".

The report’s precondition for its "two state" vision is the elimination of Hamas in Gaza, although this is asserted vaguely as follows:

“Part of the challenge is that transition in Gaza would first require the Palestinian Authority [PA] to reassert governance and security control of Gaza – an issue beyond the scope of this study.”

Within this scheme, the PA is viewed as a proxy force which enforces internal security across the West Bank and Gaza on behalf of Israel.

The latter would provide the main mechanism by which a "sovereign" Palestinian state’s internal security force, the PASF, would function effectively under Israel’s operational control.

The report highlights the need for “multiple mechanisms” to resolve disagreements between the PASF and Israeli security forces “through American mediation,” and a final option for Israel in undefined “extreme situations”.

Israel’s final option involves the power to “act unilaterally to defend itself with the knowledge that it would receive American diplomatic support in the aftermath”.

The Americans are expected to pretend to be impartial ‘honest brokers’ who, however, would back Israel in any circumstance where Israel felt the need to act unilaterally against Palestinians

In other words, the Americans are expected to pretend to be impartial "honest brokers" who, however, would back Israel in any circumstance where Israel felt the need to act unilaterally against Palestinians.

More than that, the report calls for a permanent US military presence in the region.

A functional Palestinian security force will require “a long-term commitment and continuous presence of US trainers, mentors, and monitors,” asserts the document.

Also required “would be roving patrols on the patrol roads that include a small American force along the border between Palestine and Jordan” in the form of “a permanent American force, numbering in the low hundreds”.

The report emphasises that whoever ultimately conducts the patrols – whether Israeli, Jordanian or Palestinian forces – “overall security responsibility in this area would fall to the United States”.

Perhaps the most absurd proposals involve the insistence that Palestine’s territorial "sovereignty" over its own airspace and maritime waters must remain subordinated to Israeli control.

Apart from stipulating a novel definition of “sovereign Palestinian airspace” as being limited to “10,000 feet” above mean sea level (the cruising altitude for a commercial flight is a minimum of 28,000 feet), the document goes further in demanding that “Israeli controllers must have the technical capacity to seamlessly take control of Palestinian airspace and air traffic in the event of an air defense emergency”.

The report goes on to explain: “As in the airspace domain, Palestinians would govern their territorial waters off Gaza, but with certain restrictions that enable Israelis to maintain overall security” – namely, “standard procedures in international waters, where Israel” but not Palestine, “is free to intercept, board, and inspect any ship (in accordance with international law).”

My sovereignty is bigger than yours

At the core of the two-state solution envisaged is a fundamental disparity in military power.

While Palestinians are expected to permanently demilitarise as part of “Gaza’s transition back to Palestinian Authority control,” Israel will receive US support to do the very opposite:

The IPF is basically proposing that, in return for Israel withdrawing its own settler-colonies from Palestine, Palestine itself becomes one giant surrogate Israeli colony

“And as part of the reintegration of Gaza and the West Bank, the government in Gaza would have to agree to dismantle Gaza’s military industry, rocket systems, and offensive military capabilities… We also assume that Israel will maintain (or increase) its existing capabilities to defend itself… In other words, Israel’s current security apparatus will not be replaced, but rather augmented.”

The report proposes a range of regional, border and internal security layers that would provide Israel with an unprecedented degree of “invisible” control over Palestinian society.

Among them is the idea of formal mechanisms for joint intelligence, counter smuggling and counterterrorism operations with Jordan, Egypt, the UAE, Saudi Arabia and other Gulf states.

This would accompany new joint internal security institutions “to detect terrorist activity” – including PA-led counterterrorism forces “to raid sites and arrest perpetrators,” along with a new Palestinian policing structure including “stand-alone detention facilities”.

“These five external layers [would] provide Israel great strategic depth,” the report concludes, providing Israel the capacity to militarily withdraw from Gaza and the West Bank – while relying on proxy security arrangement with the PA, Arab regimes and the US to police Palestine.

The crucial caveat here is that Israeli military rule over Palestine would not end, but simply continue by other, less visible means:

“Like any other sovereign state, Israel would retain the ability to respond in extreme circumstances where it deemed it necessary to defend itself, even if it meant violating the sovereignty of another state. But, just as for any other sovereign state, taking such actions would come with political risks and other consequences that would need to be weighed by Israel’s leadership. To mitigate some of those risks, there could be a side agreement between the United States and Israel on the general circumstances under which the United States would diplomatically side with Israel in the event Israel took unilateral action inside Palestine.”

So the IPF is basically proposing that, in return for Israel withdrawing its own settler-colonies from Palestine, Palestine itself becomes one giant surrogate-colony of Israel.

The recurring blind spot of the report’s authors is that the "sovereignty" offered to Palestinians is completely at odds with the most elementary definition of state sovereignty.

Imagine, for a moment, the following:

If such a report was ever released, it would first be met with laughter, and shortly after, with derision

A think-tank with connections to Hamas produces a report, much like this one.

The Hamas-linked report advocates that as a precondition for a two-state solution, the government of Israel led by Benjamin Netanyahu would have to be "somehow" replaced by a more appropriate, less fanatical Israeli partner.

The new more amenable Israeli partner would need to accept the complete demilitarisation of any of its offensive military capabilities underpinning its power to invade Gaza and the West Bank unilaterally.

The Israeli state would be expected to install joint operations centres with the Palestinians to identify extremists in Israel who incite violence and terror, including organisations that actively promote illegal settlement activities.

And the new Palestinian state would require the capacity to conduct unilateral military operations “in extremis,” to be agreed with an external power of their choosing (let’s say, the Europe Union) that would provide diplomatic cover for any such unilateral Palestinian military action.

If such a report was ever released, it would first be met with laughter, and shortly after, with derision, then very quickly after that, with horror that such an idea would be taken seriously by Palestinians as a viable path for a peaceful two-state solution.

And that’s exactly how Palestinians would view the latest US-Israeli vision for “peace” – a ludicrous blueprint for permanent foreign military domination that has learned nothing from the impasse of Oslo. 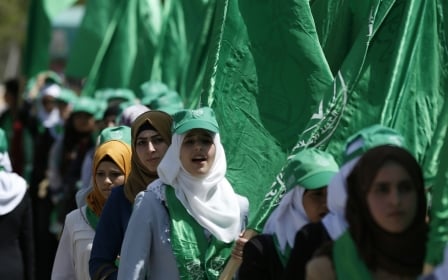