The other John McCain

Malia Bouattia
The praise heaped on McCain by the liberal intelligentsia and political elite in the US – and across the world – appears not only misplaced, but also disturbing 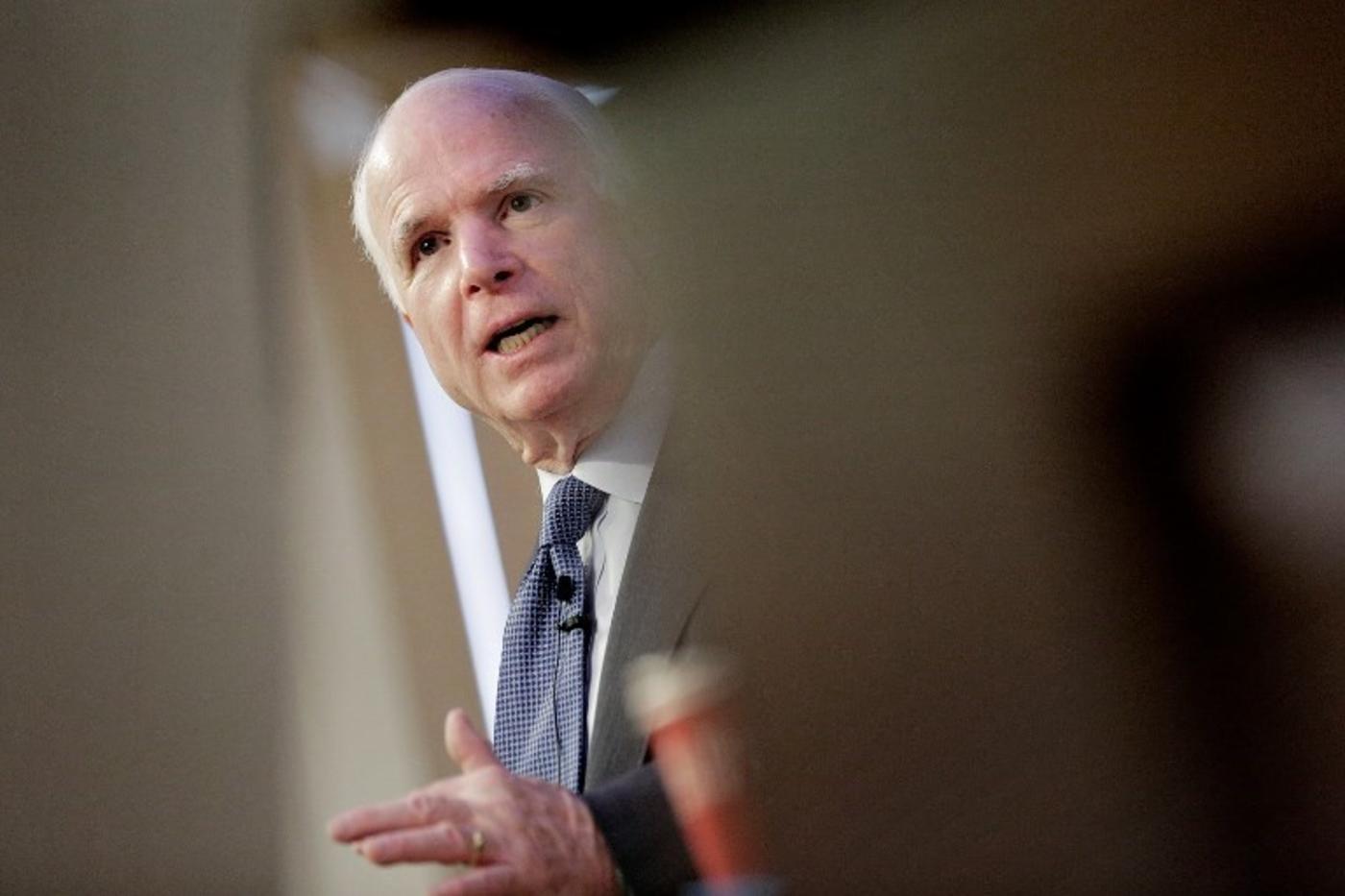 As news came flooding in that we had lost a "hero", a man unafraid to take on Donald Trump for his hatred and bigotry, a politician guided by his commitment to justice and principle, I didn't expect John McCain's name to follow. It felt like the entire liberal world had come out to share quotes and stories of the brave actions taken by this longstanding US senator of Arizona.

While the loss of life is always sad, I don’t think it's a justification for revisionism, especially in relation to political decisions taken by a politician who has had a hugely negative impact on millions of people not just in the US, but around the world.

Mourning the death of a son, a father, grandfather, husband and a friend, is important and natural, but it is immoral to discredit and forget the millions of people – namely across the global south – who have been killed at the hands of imperialist wars McCain has peddled and taken part in, in order to present him as a model leader, as a just man; even more, to turn him into a collective symbol of resistance to racism and injustice.

The era of Trumpism seems to have been followed by a historical amnesia over the actions of the critical-of-Trump camp within the US political establishment, in which McCain sits

The era of Trumpism seems to have been followed by a historical amnesia over the actions of the critical-of-Trump camp within the US political establishment, in which McCain sits, as does the former administration under Barack Obama.

Since the revocation of his support for Trump back in 2016 and his vocal opposition to statements and choices made by the US president, McCain has been presented as a figure with flawless morals. His voting record, allies and positions he held say otherwise.

Neither heroic nor principled

Indeed, McCain voted for 83 percent of Trump's positions in the Senate since his election, including support for Trump’s Supreme Court pick and never endangering the president’s political appointments. Hardly the heroic and principled Trump opponent the media would have us believe he was.

This is in fact perfectly in line with his behaviour after his defeat in the 2008 presidential elections, when he took up a central position in the increasingly right-wing opposition to Obama's presidency, rallying against even Obama’s limited healthcare reforms and proposals to tackle climate change.

When a voter suggested Obama was an Arab, McCain shook his head in disagreement saying 'no ma'am, he is a decent family man'

Many will also remember McCain's racist outbursts, such as during the 2016 presidential campaign, when a voter suggested Obama was an Arab, McCain shook his head in disagreement saying "no ma'am, he is a decent family man". This enabled him somehow to appear as a principled politician to liberals for not allowing Obama's US citizenship to be questioned, while at the same time offering his racist base the necessary dog-whistle signalling on the nature of Arabs and their moral status.

Similarly, McCain famously compared former Iranian president Mahmoud Ahmadinejad to a monkey who should be sent into space.

Then there's his war record. While the conservative American establishment has repeatedly described him as a war hero for the five and a half years he spent in a Vietnamese camp, the same feeling will certainly not be shared by the people of Vietnam, Syria, Afghanistan, Palestine, Iraq or Nicaragua – amongst others.

He was an uncompromising supporter of Israel, in favour of the war in Iraq and Libya and famously "joked" to "bomb, bomb, bomb Iran". His involvement in fostering political instability abroad didn’t stop there. He supported the arming of the Saudi regime against Yemen, as well as military strikes against North Korea and Syria.

He chaired the International Republican Institution, which sought involvement in foreign political affairs in order to ensure a favourable climate for US interests across the world. The organisation, for example, successfully influenced the results of the Russian and Mongolian elections during the 1990s.

It is difficult not to feel that we are in fact getting a glimpse of something more fundamental: our rulers celebrating one of their own and his lifetime commitment of service to their collective power

He also sat on the advisory board of a private organisation that supported the right-wing Contra terror group in Nicaragua, which included notorious anti-Semites and supporters of pro-Nazi groups united in their desire to break the back of the Sandinista revolution.

The crimes of the Contras are well documented and do not need repeating here. It will suffice to say that the people of Nicaragua and Central America still bare the scars – and the consequences – of the vicious aggressions of McCain’s political allies.

Given the terrifying nature of this political CV, the praise heaped on McCain by the liberal intelligentsia and political elite in the US – and across the world – appears not only misplaced but also disturbing. Branko Marcetic, in his alternative obituary John McCain was not a Hero articulated best how it is that despite his record, the politician is being remembered with such honour.

He wrote: "John McCain's greatest achievement was convincing the world through charming banter and occasional opposition to his party's agenda that he was anything other than a reactionary, bloodthirsty war hawk."

This is undoubtedly something which many of his colleagues, on either side of the US Senate, are envious of.

His funeral at the weekend was filled with speeches that painted him as a man of political integrity and that his life was guided by an unwavering commitment to his core ideals. In his memoir, however, he provided a different picture. McCain wrote:

"I didn’t decide to run for president to start a national crusade for the political reforms I believed in or to run a campaign as if it were some grand act of patriotism. In truth, I wanted to become president because it had become my ambition to be president."

Even when it came to opposing torture, which was supposed to be McCain's strongest moral commitment, forged by his own experiences of physical and mental abuse at the hands of the Vietcong, it seems that not all human lives deserved to be treated with the same ethical concern.

McCain and the Middle East: From bombing Iran to admitting Iraq war was a mistake
Read More »

In fact his support for the Nicaraguan death squads – renowned for their torture, rape and violence against the populations of the region – ran so deep that he described the US's eventual decision (under considerable pressure from public opinion) to cut ties with these militas as "a low point in United States history" and personally donated money to pro-Contra foundations.

As the world's rich and powerful pour praise on McCain and his work, his morals, and his desire for a better world, it is difficult not to feel that we are in fact getting a glimpse of something more fundamental: our rulers celebrating one of their own and his lifetime commitment of service to their collective power.

Where we see violence, racism, and murder, they see the actions taken by a statesmen to shape the world to serve their interests. And they mourn the achievements of a man who did so while respecting the codes that allow politicians to present their most vile actions as measured, lawful, necessary and just – a tradition which modern conservatives from Trump to Modi, Netanyahu to Orban – seem to have abandoned.

Malia Bouattia is an activist, the former president of the National Union of Students, co-founder of the Students Not Suspects/Educators not Informants Network and presenter/panellist on British Muslim TV's Women Like Us.

Photo: US Sen. John McCain (R-AZ) participates in a discussion on the unfolding violence in Iraq on 18 June 2014 at the American Enterprise Institute for Public Policy Research in Washington, DC (AFP) 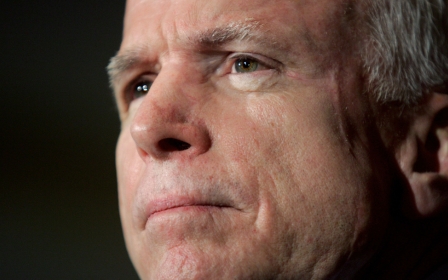 US Politics
McCain and the Middle East: From bombing Iran to admitting Iraq war was a mistake 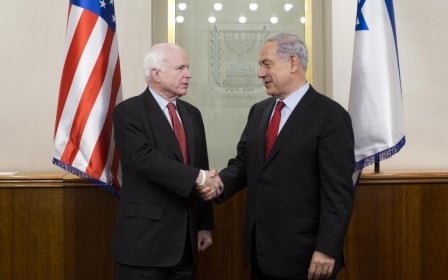 Racism
Steve Bannon is plotting to take over Europe. We must resist him
Malia Bouattia