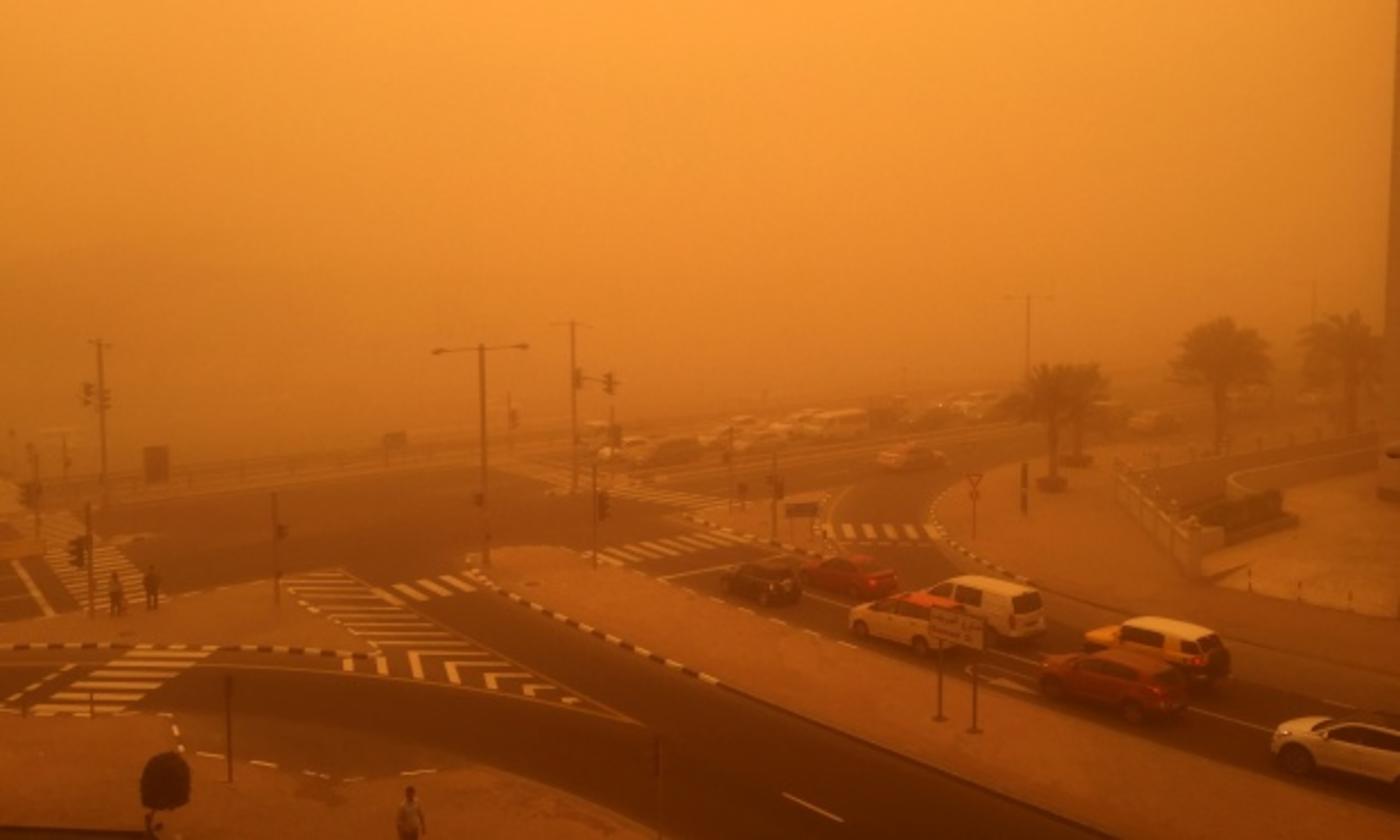 Eyes are sore, breathing is difficult and outdoor life grinds to a halt. Even the food seems to be laden with grit.

Dust and sandstorms are some of the most enduring – and unpleasant – aspects of life across the Middle East and North Africa, the cause not only of serious health problems but also of multi-million dollar losses to the region's economies.

This week a major international conference on dust and sandstorms, sponsored by the UN and Iran, opens in Tehran.

Delegates will be told to expect more storms over coming years.

"In the Middle East there has been a significant increase in the frequency and the intensity of sand and dust storms in the past 15 years or so," said Enric Terradellas, an analyst at the World Meteorology Organisation.

Dr Wadid Erian, Professor of Soil Science at Cairo University and a speaker at the Tehran conference, warned of the ecological effects of such storms.

"Sandstorms accelerate the process of land desertification and cause serious environmental pollution, with huge destruction to ecology and the living environment," he said.

The storms are highly complex phenomena, governed both by human-induced and natural factors. As with weather systems and changes in climate, the storms do not obey borders, occurring in winter and spring in some countries and in the hot summer months in others.

Dams contribute to the problem

Exactly what is causing this upsurge in storm activity is uncertain. A rush to build dams across the region and divert water resources for agriculture is considered to be one of the main factors.

Moisture acts as a glue for soil; when it dries out, dust storms are whipped up by the winds.

The construction by Turkey of the giant Ataturk dam on the upper reaches of the Euphrates and of the Ilusu dam on the Tigris is blamed for lessening water flows on the two great rivers of the region and causing a drying out of lands further south in Iraq.

Both Iraq and Iran have indulged in their own widespread programmes of dam construction and river diversion over recent years.

The region's wetlands have also been drained. In the early 1990s Saddam Hussein drained the marshes of southern Iraq, mainly to isolate his political enemies. The result has been disastrous, causing desertification and more dust storms; the UN forecasts that within the next 10 years Iraq could have up to 300 "dust events" annually.

In September 2015, a giant sand storm blanketed much of the Middle East, closing airports, causing multiple road accidents and a spike in hospital admissions. Visibility was so limited that fighting and bombing in Syria and Iraq temporarily came to a halt.

In March, a similar event occurred, turning day into night in parts of the Arabian peninsula. Over recent years, Iran has been particularly badly hit by sand and dust storms.

"We have seen a steady increase in the intensity of dust storms over the past four years," said Masoumeh Ebtekar, Iran's vice president and environment minister.

In May last year, 16 villages in the southeast of the country were reported to have been buried by a succession of sandstorms, with land ruined and livestock killed.

Earlier this year, in the southwestern province of Khuzestan, a politically sensitive area close to the border with Iraq with a majority Arab population, there were demonstrations about air pollution caused both by sand and dust storms and by the local petrochemical industry.

At one point, the electricity and water systems in the city of Ahvaz, described by the World Health Organisation as one of the world's most polluted cities, were shut down due to the storms.

States around the region have used precious water resources carelessly. Saudi Arabia rushed to become self-sufficient in many agricultural products, using up vast amounts of water and further drying out lands.

Iran, partly due to international sanctions, drained wetlands and lakes for water in order to promote food self-sufficiency. Lake Urmia in the country's northwest, once one of the world’s largest saltwater lakes, has lost at least 80 per cent of its waters in recent years.

Though some restoration work has been carried out, boats still lie stranded far away from the water. Winds whip up salt and other materials from the dried out lake bed which fall on surrounding lands, rendering them infertile.

Dr Kaveh Madani has been studying dust storms as part of his work at Imperial College, London. He says that five years ago, dust and sandstorms were rare in his native Iran.

Madani said that while Iran has been careless with its water resources it had been more of a victim than a contributor to dust storms.

"One of the big problems is that across the region the environment has been given a low priority: people want quick solutions but you can't just throw money at complex issues like dust and sandstorms – there has to be a multi-faceted approach including properly implemented water and land management policies," he said.

The dust can also transport materials such as pesticides, herbicides, heavy metals and radioactive materials used by the military

Deserts and dry areas, covering about 40 percent of the Earth's land surface, are the source of sand and dust storms.

Up to 50 percent of the world's desert dust originates from the Sahara. Carried by the winds, it can travel vast distances, not just to surrounding areas including the Middle East but to the Americas; sand from the Sahara also reaches Mount Everest and Hong Kong.

Professor Andrew Goudie at Oxford University has done extensive studies on both the causes and impacts of dust storms in the Middle East, particularly relating to health.

Dust and sandstorms can be beneficial, carrying nutrients to the oceans and land. Dust blown from the Sahara feeds the vast rainforests of South America.

"But dust and sand – whether from the Sahara or whipped up by winds from the Arabian desert– can pick up and transport biological materials which include bacteria, pollen spores, fungi and viruses," said Goudie.

"The dust can also transport materials such as pesticides, herbicides, heavy metals and radioactive materials used by the military."

Serious health problems can develop as people breathe in these materials. Fine particles can enter directly into the bloodstream.

Goudie points to high levels of asthma in southwestern Iran and in the Gulf, with 24 per cent of Saudis being described as asthmatic. The incidence of asthma and other respiratory ailments is also high in the UAE and Kuwait, which lies at the confluence of various wind systems.

Inhaling dust can also cause cardiovascular and other health problems; Goudie said there's evidence suggesting that a substantial proportion of lung cancers in the so-called "dust belt" of the Middle East and North Africa may be caused by exposure to desert dust.

"One of the problems is that there's a lack of research and solid data in the region," Goudie added.

"Kuwait, Iran, Jordan and Oman are doing some good work but others are not. Then of course conflict not only creates its own dust through bombing and fires but it makes gathering data or taking any proper measures to alleviate the situation virtually impossible."

Dust storms also cause large-scale economic damage with the UN calculating the storms account for losses of about $13bn in gross domestic product each year across the region. Not only does agriculture suffer; when airports in Dubai, Abu Dhabi or Doha  are shut due to poor visibility – even if it’s only for a few hours – millions in revenue are lost.

Sadly, with enmities on the increase and ongoing conflict in many areas, cooperation is one factor severely lacking across much of the region.

When dust storms swept across southwest Iran earlier this year, oil production was reported to have been cut by thousands of barrels a day.

Dust and sandstorms can also affect the generation of alternative energies: coatings of dust on solar panels can severely inhibit power output.

It's uncertain how climate change will influence dust storm behaviour but with rising temperatures forecast across much of the region, it is likely that land in many areas will become drier and more prone to being carried up into the atmosphere.

In some areas, farmers are being persuaded to plant crops and vegetation more capable of withstanding drought and preserving the integrity of land surfaces. A growing awareness of the need to cut down on water use is evident in some countries.

Monitoring systems, alerting people to dust and sandstorms, has improved significantly with a new supercomputing centre tracking storms in the Middle East being opened in Barcelona in Spain.

There is joint action on the issue between some states; Iraq and Iran recently signed an agreement to set up a joint dust-monitoring centre.

The UN says an integrated approach, with cooperation at both regional and sub-regional levels, is vital.

Sadly, with enmities on the increase and ongoing conflict in many areas, cooperation is one factor severely lacking across much of the region.

Photo: High winds and sand whip motorways and roads in the UAE, 2015 (AFP)