David Hearst
Saudi Arabia needs to decide if it wants to support Palestinians in their resistance to occupation, or support the siege manned by Israel and Egypt until Gaza is demilitarized It is tough work being the Saudi ambassador to the UK. First, you have to stir yourself into action to deny the undeniable: The Israeli attack on Gaza comes with Saudi backing. That, in itself, is demeaning. But no sooner has your wrath been righteously expressed, than a colleague contradicts you. Worse still, he's the boss's brother. What is a prince to do?

In his reply to my column, Prince Mohammed bin Nawaf Al Saud wrote: "To think that Saudi Arabia, which has committed itself to supporting and protecting the rights of all Palestinians to self-determination and sovereignty would knowingly support the Israeli action is quite frankly a grotesque insult." He then admits "dealings" between the Kingdom and Israel but claims those "limited to bring about a plan for peace." Then he says:

"The Palestinian people are our brothers and sisters -whether they are Muslim Arabs or Christian Arabs. Be assured we, the people and Government of the Kingdom of Saudi Arabia, will never ever give up on them, we will never do anything to harm them, we will do all we can to help them in their rightful claim to their own homeland and return of lands taken illegally from them."

Hardly was the ink dry on this official news release, when Prince Turki al-Faisal, Bin Nawaf's predecessor as UK ambassador, former intelligence chief and the brother of the current foreign minister wrote in al-Sharq al-Awast that Hamas was to blame for firing rockets and for refusing to accept Egypt's ceasefire plan (which would have disarmed them). This is Israel's and Egypt's view too.

So which is it? Does the Kingdom of Saudi Arabia support Palestinians in their resistance to the occupation? Or does it support the siege manned by Israel and Egypt, until Gaza is demilitarized? These are two clear policies -- support for the Palestinian resistance to the occupation and ending the siege of Gaza, or keeping the siege in place until all factions in Gaza are disarmed. Either Israel is engaging in genocide (strong words, Mr. Ambassador) or the resisters are terrorists who must be disarmed. Decide what it is you want the Kingdom to say. You can't say both. You can't swear allegiance to the Palestinians and give a nod and a wink to their killers.

And are the Kingdom's dealings with Israel really "limited to bring about a plan for peace"? You are privy to the cables, Mr Ambassador. Tell us what passed between Prince Bandar and the Mossad director Tamir Pardo at that hotel in Aqaba in November last year. The Jordanians leaked it to an Israeli newspaper in Eilat. Were Bandar and Pardo: 1. soaking up the winter sun, 2. talking about the Arab Peace Initiative, or 3. plotting how to bomb Iran?

And why are your new friends the Israelis being so loquacious? Why, to take the latest example, did Dan Gillerman, Israeli ambassador to the UN 2003-08, say at the weekend that "representatives from the Gulf states told us to finish the job in Gaza time and again." Finish the job? Killing over 1,000 Palestinians, most of them civilian. Is that what you meant when you said "we will never do anything to harm them"?

The carnage in Gaza at least gives the world clear sight of the protagonists. The wonder of it is that all are American allies, three have US bases on their soil and a fourth is a member of Nato. America's problems in the Middle East are more to do with their sworn allies than their sworn enemies.

On one side, stands Israel, Saudi Arabia, Egypt, United Arab Emirates and Jordan. They consider themselves the voice of reason and moderation, but their methods are violent -- the military coup in Egypt and the attack on Gaza have all happened in the space of 12 months. On the other, stands Turkey, Qatar, the Muslim Brotherhood and its affliate Hamas.

We should, however, talk of governments rather people, because one reason why the government of Saudi Arabia has such an extreme position on Hamas and the Brotherhood in general, is that it knows full well that its own people don't share their view.

Saudi Arabia's leading pollster Rakeen found that 95 percent out of a representative sample of 2,000 Saudis supported the continuation of the Palestinian resistance factions. Only three per cent did not. Eighty-two percent supported the firing of rockets into Israel and 14 percent opposed it. The kingdom's hatred of Islamism stems not from the fact that it presents a rival interpretation of Islam. It is that it presents to a believer, a democratic alternative. That is what really scares the monarchy.

The proof of all those secret Saudi-Israeli meetings is to be seen in the behavior of Egypt. It is impossible to believe that its new president Abdel Fattah al Sisi could act towards Hamas in Gaza independently of his paymasters in Riyadh. He who pays the piper -- $5 billion after the coup, $20 billion now -- calls the tune.

Sisi sees Hamas entirely through the prism of the Muslim Brotherhood he deposed last year. Hamas is villified in the lickspittle Egyptian press as the enemy of Egypt. A trickle of aid has been allowed through the border crossing at Rafah, and it is sporadically opened to a few thousand wounded Palestinians. The Israeli Army is not alone in blowing up Hamas' tunnels. The Egyptian army announced recently they had blown up 13 more, a deed which earned them the title of being "a sincere neighbor" of Israel. Sisi is content to let Hamas and Gaza take a hammering, and make no efforts to get a ceasefire. The last initiative was not even negotiated with Hamas.

Mubarak made a similar miscalculation during the 2006 incursion into Lebanon, supporting an operation which he believed would cripple Hezbollah. In the end he was forced to send his son Gamal to Beirut to express Egypt's support for the Lebanese people. Both the kingdom and Sisi know that dropping the Palestinian card is a risky business.

Saudi Arabia is treading a fine line. According to my sources, Netanyahu's rejection of Kerry's peace initiative over the weekend was due in part to the full support of its Arab allies. Saudi Arabia's active support is keeping this brutal war going. 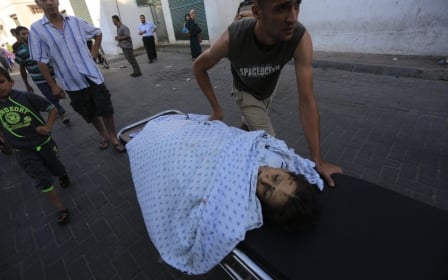