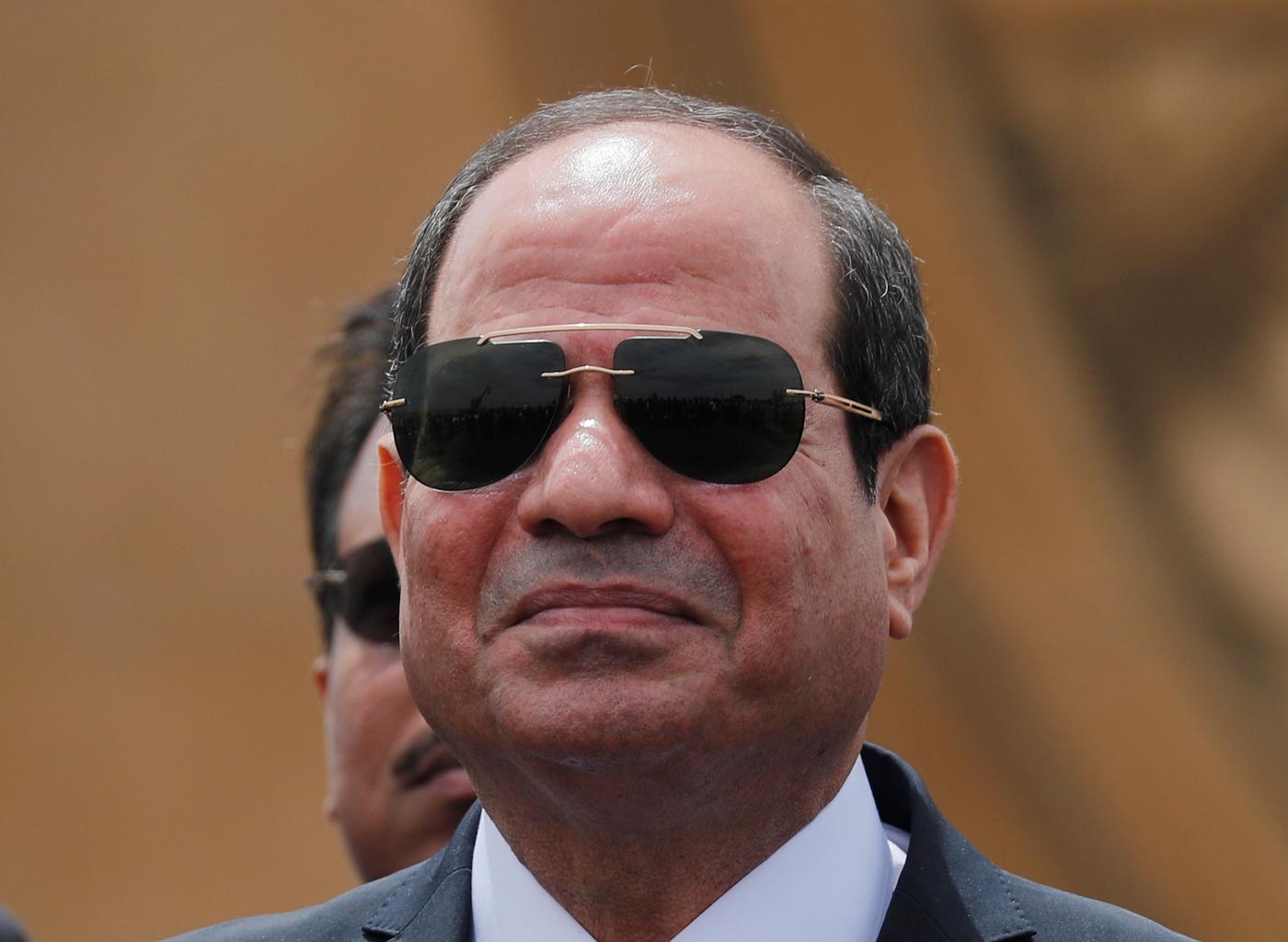 There is no question that US President Donald Trump’s “favourite dictator”, Egyptian President Abdel Fattah al-Sisi, is the head of a military junta that overthrew a democratically elected president, nor that Sisi has consistently lied, misrepresented facts and overseen the proliferation of blatantly propagandist messages to aggravate public hostility towards the January 2011 uprising and its most iconic figures.

Yet his supporters, emboldened by a complicit group of global leaders, continue to back Sisi as the only guarantee of a “civilian” president - the proverbial last line of defence against the usual suspects - the convenient, albeit imaginary, Islamist bogeymen.

The level of cognitive dissonance displayed here is a lesson for posterity.

Although the Muslim Brotherhood effectively no longer exists on the political stage – its members having been murdered, imprisoned or exiled – the group continues to dominate a false narrative about the causes of the current state of economic collapse that has exacerbated the financial woes of the vast majority of Egyptians.

Sisi's recent comments ... are a stark example of how the regime manipulates public perception to deflect attention from its recurring failures

According to official data published by Egypt’s central statistics agency in July, 33 percent of Egyptians live below the poverty line of about $1.45 a day, up from 28 percent in 2015 and 17 percent in 2000. While a perfect storm of corruption, misappropriation of public funds, International Monetary Fund-imposed austerity measures and mismanagement of key portfolios are the real culprits, Sisi and his enablers in the government, parliament and media continue to point fingers at the blighted 2011 uprising, conflating it with the “treasonous” Muslim Brotherhood as the root of all evil.

Sisi’s recent comments at an army-related cultural seminar are a stark example of how the regime manipulates public perception to deflect attention from its recurring failures. Referring to the deadlock in talks to reach a comprehensive agreement with Ethiopia on the Grand Ethiopian Renaissance Dam (GERD), Sisi said that Egypt “revealed its back and bared its shoulder in 2011”.

Putting aside the tasteless sexism of this comment, Sisi doubled down, spicing up the lie by adding that if it wasn’t for the 2011 uprising, both parties would have been able to reach a satisfactory agreement. He even warned that a repeat of those events was tantamount to “devouring” the country.

This wasn’t the first time Sisi has blamed the GERD crisis on the 2011 uprising.

Amid a political hailstorm triggered by corruption allegations made by the whistleblower contractor Mohamed Ali, Sisi held an impromptu national youth conference. As hundreds of youth were arbitrarily arrested, he claimed that Egypt had been “paying since 2011 for one mistake … a price we’ve paid and will continue to pay”, adding that “dams would not have been built on the River Nile … was it not for 2011”.

As the deadlock continued, state-run Ahram Online published an interview with Magdi Amer, Egypt’s former assistant foreign minister for Nile Basin countries, where, lo and behold, he concluded that the Muslim Brotherhood was accountable for the deterioration of talks with Ethiopia. He specifically blamed former President Mohamed Morsi for mismanaging the issue, pinning the crisis on a deceased man who was barely in office a year, while the current administration, which practically caused his death, had failed time and again over the course of six years.

But the “Brotherhoodisation” of the GERD crisis had begun weeks earlier. Dominating the regime’s airwaves were two of Sisi’s cheerleaders, who shamelessly spewed the exact same lies. Sadah El-Balad’s Ahmed Moussa reasserted that the 2011 uprising was the root cause and topped it off with a hair-brained, unsubstantiated allegation that Morsi was a spy and that his 2012 visit to Ethiopia proved it.

On MBC Masr, Amr Adib, instead of analysing the details of the diplomatic row, spent the bulk of his nightly show questioning why Morsi was even discussing the GERD in a high-level executive meeting, supposedly to prove that the crisis began with him.

A simple chronology tracing the milestones of the GERD’s conception and construction proves otherwise.

In November 2010, a design for the dam was submitted by James Kelston. In March 2011, a $4.8bn contract was awarded without competitive bidding to an Italian industrial construction group called Salini Costruttori, and the dam’s foundation stone was laid the next month by former Ethiopian Prime Minister Meles Zenawi. The point is, controversy over the dam started well before the January uprising. Nothing was done about it between January 2011 and June 2012, when the Supreme Council of the Armed Forces ruled the country.

Within a month of taking office for a brief and contentious year starting in June 2012, Morsi took the initiative to visit Ethiopia as a goodwill gesture to boost cooperation and channel negotiations on how best to manage the inevitable reality that Ethiopia was building the dam.

From July 2013 until today, Sisi’s government has been busy building a new capital, the largest cathedral and mosque in the Middle East, and bridges galore, but apparently not paying much attention to the looming water crisis.

Just over a year ago, during the first Cairo Water Week, Sisi reportedly said that water issues should not be politicised, and that “Egypt had and will continue supporting the efforts of its fraternal countries to bring mutual benefits from the Nile River without causing harm to the Egyptian people”.

It seemed to come as a surprise to his administration when a year on, the Ministry of Water Resources announced that Egypt’s annual share of Nile water decreased by five billion cubic meters in 2019 because of dwindling rainwater due to climate change.

The current standoff with Ethiopia is not even about the existence of the dam; it’s about the timeframe within which Ethiopia will fill it. Sisi’s Egypt has failed to negotiate a longer seven-year timeframe, versus a four-year period proposed by Ethiopia, which could have a huge impact on Egypt’s water supply.

These are the facts. It is also a fact that at the centre of the false narrative Sisi is propagating about the January uprising and its intentional conflation with the Muslim Brotherhood, is a broader strategy oscillating between a celebratory appropriation of the popular display of people power, and, on the other hand, its delegitimisation as the source of economic instability, social chaos and terrorism.

When it was politically expedient, Sisi exploited the nationalist sentiment, pushing for street action to rile up the masses against his political adversaries as he planned a public massacre in 2013. He even framed the 3 July coup as a continuation of the will of the people displayed in 2011.

The recent spate of arrests ... are a testament to the world of lies in which the regime operates

But by 2017, his tone had changed, attacking the January uprising as a conspiracy born from a false consciousness about the issues facing the country at the time. In a speech that April, he warned that any further street action would destroy the country completely.

By 2018, Sisi was not even bothering to commemorate the January uprising, while taking every opportunity to attack it and to oversee the deliberate humiliation of its icons.

The recent spate of arrests, including those of Alaa Abdel Fattah and Esraa Abdel Fattah, are a testament to the world of lies in which the regime operates. On the one hand, it panders to the youth as the guarantors of a brighter future, and on the other subjects the most visible of them to torture and illegitimate incarceration to make an example of them.

But you can’t fool all the people all the time.