Stop glossing over the siege in Gaza and call it what it is: Genocide

Nada Elia
Just as there has been a discursive shift to call the occupation of Palestine an apartheid, we must acknowledge what is really happening in Gaza 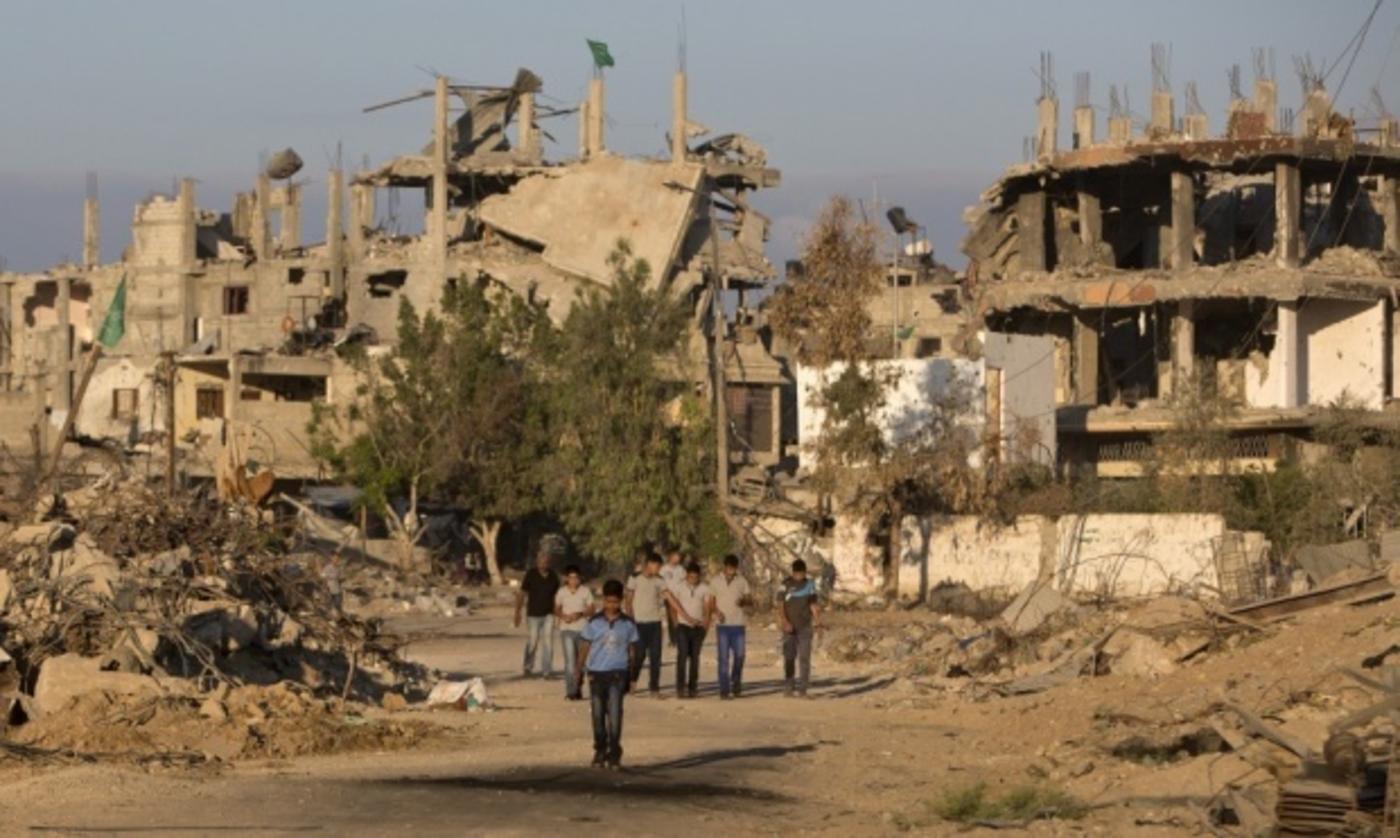 As accustomed as I am to the offensiveness of the mainstream media coverage of Palestine’s suffering, I still have to stop and do a double take every now and then.

An article in Haaretz this past weekend, with its headline “No Water, No Electricity, and Children Dying Unnecessarily”, was one such moment.

When is it ever necessary for children to die, I wondered? I could not help but be horrified at just how expendable people must be before someone can come up with a cavalier headline about the necessity, or lack thereof, of its children dying.

But the article itself, an interview by Ayelet Shani with Salah Haj Yahya, a Palestinian doctor who leads a Physicians for Human Rights monthly delegation from Israel into the Gaza Strip, was problematic in other ways.

The journalist persisted in asking about Hamas, suggesting that the political party was to blame for Gaza’s misery, rather than actually naming Israel and its sub-contractor, Egypt, as the powers responsible for enforcing a siege that penalises the predominantly refugee population for its political choice.

What is missing, in what otherwise presented itself as “concerned” journalism - oh dear, children are dying “unnecessarily” - is worth review.

Specifically, Shani so totally normalises Israel’s illegal siege that it is not presented as the primary cause of the critical situation in the Gaza Strip. Instead, she focuses on the crumbling infrastructure, the lack of equipment, while always, always pointing an accusing finger at Hamas.

Haj Yahya redirects her attention to Israel’s responsibility, but she is undeterred, as she persists in criticising the violence inflicted by Hamas on the population of Gaza.

Why would it be the responsibility of the Arab states to ensure that Gaza has electricity and clean water?

For example, in response to Yahya saying he does not coordinate with Hamas, Shani asks: “You have no contact with Hamas, not even an informal one? Don’t you need their permission? Don’t they supervise your work?”

Haj Yahya: “There’s no contact. We coordinate our entry with the Israeli side, we don’t work with Hamas or its representatives. We only work with hospital directors and the Palestinian health ministry, with the health minister in Ramallah and his deputy in Gaza. They are the ones who approach us.”

Can we just remember that it is indeed Israel that controls the borders, or should I say, that maintains the siege?

Yet the focus on Hamas suggests that Hamas has the greater say. Or worse yet, that it may deny a Palestinian medical delegation permission to treat patients in Gaza.

Further, Haj Yahya says: “The water is unfit to drink, unfit for any use. There is hardly any electricity. Gaza is on the brink of a humanitarian disaster. There’s hardly any international aid and the Arab states aren’t succeeding in providing any assistance.”

The Arab states? Why would it be the responsibility of the Arab states to ensure that Gaza has electricity and clean water?

Why couldn’t Shani, if she were a responsible journalist, have made it clear that it is Israel that controls Gaza’s infrastructure, its electricity and necessary equipment for its water treatment facilities, not “the Arab states"?

Perhaps most damning is this part, where Haj Yahya brings up an egregious matter he and others have documented before, namely that patients in need of life-saving treatment are blackmailed into collaborating with Israeli intelligence in order to obtain a permit to enter Israel, for treatment that is not available in the Strip:

Haj Yahya: There is also the issue of blackmail.

The Palestinian narrative is as besieged as the people in Gaza

Haj Yahya: Their travel permit is granted only on condition that they collaborate – information in exchange for an entry permit.

Shani: You’re saying that the Shin Bet blackmails these patients? Can you prove that?

Haj Yahya: We have filmed documentation of patients being threatened or blackmailed in exchange for a permit. We’ve written a report on this. The questioning often deteriorates into unpleasant and humiliating situations. Violence is sometimes resorted to.

And Shani continues, blaming Hamas for urging Palestinians not to collaborate with Israeli intelligence, even as Haj Yahya persists in explaining that it is not Hamas that is denying his patients exit permits.

The Palestinian narrative is as besieged as the people in Gaza.

The crime of crimes

But I want to go back to the title of this article, to children dying “unnecessarily”.  As early as 2010, Nadia Hijab, a Palestinian political analyst and author who now heads Al-Shabaka: The Palestinian Policy Network, asked: "When does it become genocide?”

'The fact that Operation Protective Edge was the third large-scale, sustained military assault on this unlawfully blockaded, impoverished and endangered population also formed part of the larger genocidal context'

Four years later, in an article published in the aftermath of Israel’s 2014 assault on Gaza, Richard Falk asked: “Is Israel guilty of genocide?”

A professor emeritus of international law and former UN Special Rapporteur on Palestinian human rights, Falk is exceedingly cautious with terminology about what is considered the “crime of crimes,” and writes, cautiously, about a “genocidal” context.  ﻿

“There was a genocidal atmosphere in Israel, in which high-level officials made statements supporting the destruction or elimination of the Gazans as a people. Furthermore, the sustained bombardment of Gaza, under circumstances where the population had no opportunity to leave or to seek sanctuary within the Gaza Strip, lent further credibility to the charge.

"The fact that Operation Protective Edge was the third large-scale, sustained military assault on this unlawfully blockaded, impoverished and endangered population, also formed part of the larger genocidal context.”

The circumstances that constituted a “genocidal context” in 2014 have not improved, and it is now commonplace knowledge that if the siege is not lifted, Gaza will no longer be livable by 2020.

That crisis is not a natural disaster but politically manufactured, as Israel and Egypt enforce a “genocidal context” soon to enter its tenth year

Reporting on the light sentence given to an Israeli soldier who shot a young Palestinian lying injured in the street dead, writer and doctor of psychology and behavioural science Yoav Litvin wrote: “Israeli politicians have declared an open season on Palestinians. The precedent set by this case will further solidify the complete dehumanisation of Palestinians and pave the way for further ethnic cleansing and genocide in the Occupied Palestinian Territories.”

The stakes are high. Cold-blooded murder is condoned in the West Bank while in the Gaza Strip, the situation is, literally, a matter of life and death for two million people.

That crisis is not a natural disaster, but politically manufactured, as Israel and Egypt enforce a “genocidal context” soon to enter its tenth year.

Racists everywhere are emboldened, proudly carrying banners that proclaim “Kill Them All."

We, too, must be courageous. We have recently seen the once-taboo word “apartheid” gain wider circulation, and the discursive change has indeed changed many millions of people’s perspective on the question of Palestine.

Can we also name the “unnecessary” deaths of children for what they constitute, namely, unfettered, state-sanctioned genocidal intent?

And no, no matter how much Zionists attempt to manipulate our stories, we must not, cannot, let them blame Hamas for that.

Photo: Palestinian boys walk past buildings destroyed by Israeli strikes on their way to school in Shejaiya, Gaza (AFP) 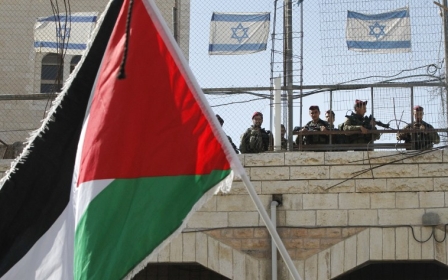 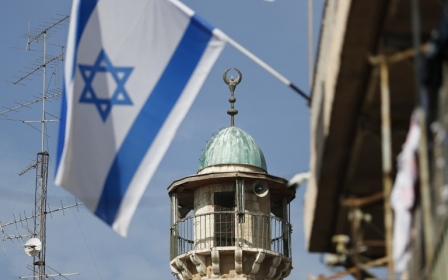 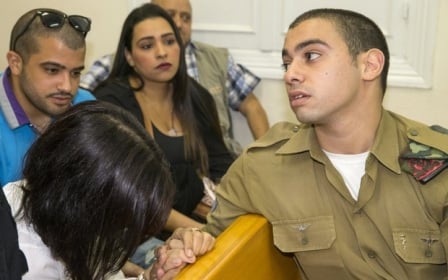