Amr Khalifa
For Egyptian revolutionaries, the choices in the US election are bad and worse. Bottom line: a Trump White House could be a disaster 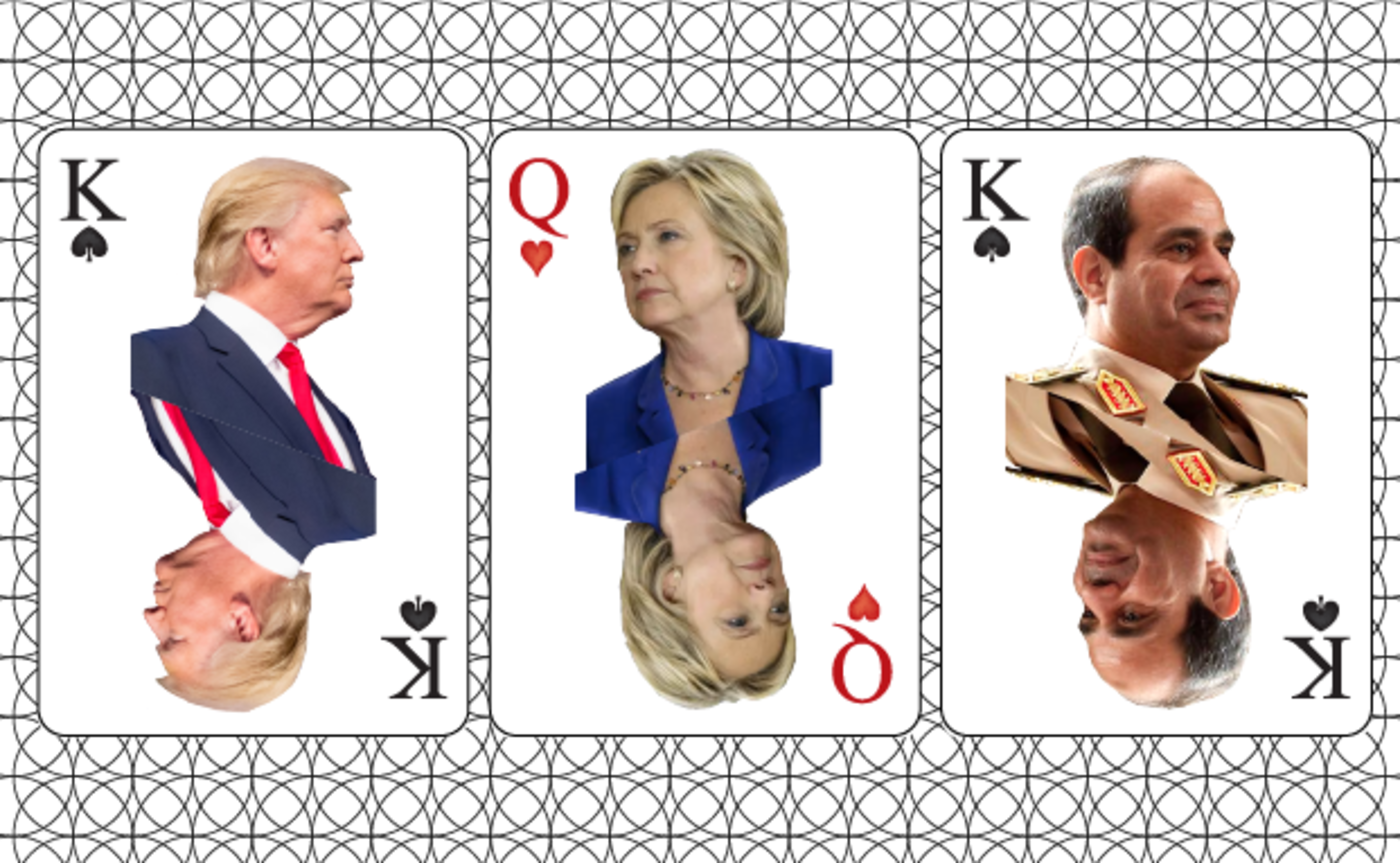 For Egyptians who believe in a revolution, the one now under attack by a Sisi-led counter revolt, the American presidential elections is crucial.

Think, as an Egyptian, the election will have minimal impact on Egypt? Believe that things cannot regress further under a Sisi presidency? Think again!

Think, as an Egyptian, this will have minimal impact on Egypt? Perk up your eyes and ears because whoever wins the election will have a significant impact on Egypt. Believe that things cannot regress further under a Sisi presidency? Think again!

A Trump presidency will, with nearly zero doubt, implode world order in ways that few fully understand at this time. Worse yet, for a vulnerable Egypt, a Hillary win will not bring about hellacious change to the Egyptian delta.

So the options, in the unfolding American political calculus, are either full on disaster or a gradual deterioration.

Either way, by the time this unfolds, millions of Egyptians will scream "to patience there is limit", as Om Kalthoum, the legendary diva of Arab music, once did.

Patience with Abdel Fattah al-Sisi, who embodies the ethos of the military establishment's entrenchment in all things civil, is not a plentiful commodity.

As one with a foot in Cairo and another in the Empire State, this observer is uniquely positioned to see this disaster unfold. Within mere hours of one another last week, two American papers, USA Today and The Washington Post, took positions that are not so much pro-Hillary as they are life or death warnings about her self-involved opponent.

"Republican nominee Donald Trump is by unanimous consensus of the editorial board, unfit for the presidency." No mincing words here by USA Today. "Trump has demonstrated that he lacks the temperament, knowledge, steadiness and honesty that America needs from its presidents,” the paper added.

That this muscular denouncement also aptly describes Sisi is just a delicious bonus. But these words are not the exception: they are the rule. And they do not come stronger than this: "A President Trump could, unilaterally, change this country to its core. By remaking US relations with other nations he could fundamentally reshape the world too," blasted the Washington Post.

Analysts, along with millions of Americans, lament an atrophied political IQ by a man who lacks political experience, both foreign and domestic. Trump consistently displays a profound devotion to racism, sexism and a clear agenda for the enriching of the rich that runs contrary to the American dream.

And where Egypt is concerned, Trump is clear about Sisi: "He is a fantastic guy…there was good chemistry there. There was a good feeling between us." That this "fantastic guy" has well over 60,000 Egyptians behind bars because of their political views, while more than 1,500 have been disappeared, seems not to be a deal breaker for a man who not simply defines facism-lite, but puts it into practice.

In the Trumptonian world view, Sisi is a "yuge" ally in the fight against the Islamic State (IS) group and a friend to Israel. Anything else is an afterthought. Problem is: anything else happens to be the aspirations of the Egyptian people.

Sisifites would do well to remember that this is the same Trump who, at the outset of his campaign, called for a "total and complete shutdown of Muslims entering the US".

That Trump, with his strong right-wing bent, would favour Sisi’s rule, numerous warts and all, yet view all Muslims with suspicion, goes to the core of his contradictory, illogical and racist paradigm.

Essentially, Donald Trump is a three-card monte player of a businessman: what he promises Sisi should he come to power will not be what he delivers.

Nonetheless, it should surprise absolutely no one that two men who lack a nuanced world view and love their own voices best are well on their way to becoming best friends. It is no coincidence that both call Vladimir Putin, the international bully, a bosom buddy and a commendable role model.

Think this imperfect coupling would not pose a problem to Egypt? Imagine for a moment a large terror attack in Cairo midway through a Trump presidency and near election time in Egypt. A steely state terrorism response by an ultra-hawkish Sisi administration follows.

It is not unrealistic, in the least, to imagine thousands more innocent Egyptians jailed, hundreds more disappeared and tens killed in response as Trump stands to salute, applauding the actions of his ally in Cairo.

Sisi is not panting after a Trump seal of approval as he continues his march down Draconian Alley. However with Trump, the star of The Apprentice now playing political apprentice, having no conceptual understanding Sisi’s destabilising effect, the Trump-Sisi binary would be destructive to both the Egyptian and American sides.

In a Middle East and North Africa where the next conflict is, seemingly, around the corner, a Trump presidency would only further radicalise a combustible Egypt.

This is a nation that witnessed another assassination attempt of an important assistant general prosecutor in New Cairo and the gunning down of five Central Security Forces conscripts in Arish, Sinai, only 48 hours apart.

Such attacks are but the tip of a melting iceberg. When it comes to solutions for terrorism, Trump and Sisi are ideological twins who believe you answer the stick with the stick, only and often with a healthy sprinkling of sanctioned torture.

Reactions of such oversimplification have only caused terrorism to mushroom under Sisi’s rule but, worryingly, Trumptonian calculus would view this as an acceptable loss so long as that instability remained Nile-side. Only it won’t.

A Hillary Clinton presidency would bring political logic and international savoire faire, buttressed by decades of political experience. Yet this does not necessarily paint a brighter picture for the state of human rights in Egypt, let alone democracy.

If experience is a table, its political legs are expediency and cynicism. Understanding that she must continue to be viewed as pro-Israel, Clinton had no issue meeting with Sisi during his recent UN visit.

You see, protecting Israel’s border with Egypt is life or death for any potential US president.

Political gains trump the perception of alliance with a military oligarch responsible, directly or indirectly, for the killing of over 1,800 Egyptians, as of 14 months ago, and the torture and rape of thousands more in Egyptian jails.

Even as Clinton is "blasted for meeting Egypt’s strongman" by scholars and activists who denounced the meeting as one that will be taken as an "endorsement…in Egypt and around the world," she still forged ahead with the meeting.

The image of Clinton shaking her head as a simultaneous interpreter spoke Sisi’s words "an Egypt that builds a new civil society, that upholds the rule of law, that respects human rights and liberties" only days after Egypt froze the assets of two its prominent human rights defenders is nothing short of asinine. Hillary can, by no means, be considered anything but a proponent of the status quo in Egyptian-American relations.

Those who paint Clinton as a statesperson of the highest caliber are right - just not all the time. She listened to Muslim Brotherhood apologists, like Shadi Hamid, in the days after the revolution. He relayed to her, then, the MB message "under no circumstances do we want to govern". The rest is bloody history.

A few years later, the very same Clinton would admit during these elections that she "cautioned against…overthrow of Mubarak… and now we are back with basically an army dictatorship". Such words will earn her the mistrust, funnily enough, of both the Sisi camp and the revolutionary camp.

Egyptians are familiar with dark and darkest choices. They had to chose between the military’s Ahmed Shafik and the Brotherhood’s Mohamed Morsi in 2012. The comparison ends here though.

Should Trump be chosen to sit in the White house for four years it would be the "reign of the most unstable, unfit president in US history", according to the Wall Street Journal editorial last week. Trump would also possess unique access to the nuclear football - a mobile world-destruct button.

The battle for the White House is not Disney’s Beauty and the Beast. Neither Clinton nor Trump are in a position to strong-arm Sisi, nor, quite frankly, is Egypt a priority unless the Sisi model begins to implode.

Yet, ultimately, a Trump win will be viewed by a slowly congealing opposition in Egypt as a set-back of "yuge" proportions.