The Middle East is being reshaped by ever-more-repressive forms of authoritarianism, as the guiding hand of the US not only promises further victimisation of minorities and pro-democracy forces, but also the unleashing and empowerment of violent insurgency groups.

To understand the Middle East, or even the world more broadly, one must first understand the basic orienting principle that governs all geopolitical manoeuvring: that in an anarchical international system, one lacking a global governing body, nation states put survival of the ruling regime - against the threat posed by potential foreign rivals and internal foes - first and foremost.

This realist logic underpinned the Bush-era neoconservative movement, which believed that spreading democracy to the Middle East would eliminate the threat posed to the survival and self-interests of the US and ally Israel by Saddam Hussein’s Iraq and its longtime nemesis, Iran.

As international relations theories go, no two democratic nations have waged war against each other, nor have those with at least one McDonald’s franchise restaurant on their soil - thus also illuminating the manner in which the “spreading democracy” agenda has been led by Wall Street.

The disaster of the US invasion and occupation of Iraq, and the hyper-sectarian forces it unleashed across the Middle East, however, resulted in a withdrawal from this project under former President Barack Obama, who put his “do no harm” organising principle ahead of any ideologically or idealistically driven motive he might have had towards the region.

The US has abandoned whatever lip service it has given to liberal democratic values in the past, and now offers full-throated support for authoritarianism and oppression

For a brief moment, it appeared democracy, or rather anti-authoritarianism, had a chance to take hold in the region during Obama’s term when, in 2011, the Arab world - fed up with foreign interference and the socioeconomic misery wrought upon it by repressive, dictatorships and monarchies - rose up in unison to demand economic and political reforms in a series of pro-democracy protests that came to be known as the Arab Spring.

Zine El Abidine Ben Ali fell in Tunisia, as did Muammar Gaddafi in Libya, Ali Abdullah Saleh in Yemen and Hosni Mubarak in Egypt. In Syria, Bashar al-Assad survived only by destroying his entire country, and by the end of Obama's second term, that spring had been crushed in a region-wide counter-revolution.

This is a brief and narrow view of the terrain US President Donald Trump inherited when he took office in early 2017, mindful of the fact that nothing here constitutes a reading of the Saudi-Iranian rivalry at the heart of the geopolitical struggle in the region.

If the past two years have revealed anything that can be articulated as the “Trump Doctrine”, it’s that crushing Iran and giving Israel whatever it darn well pleases is the only thing that matters - and to hell with promoting democratic reforms and advancing human rights.

In other words, the US has, at least for now, abandoned whatever lip service it has given to liberal democratic values in the past, and now offers full-throated support for authoritarianism and oppression - if that’s what’s national security elites believe is needed to counter the mullahs in Tehran, placate the Israel lobby in Washington, and keep US soldiers out of the region.

Today, Arab leaders have a free hand to carry out whatever dastardly deed they deem necessary to crush and kill political adversaries at home and abroad.

The Trump administration’s transparent efforts to provide cover for the brutal murder of Washington Post journalist Jamal Khashoggi at the hands of Saudi operatives on Turkish soil speaks to exactly that.

Last month, when Egypt executed nine political prisoners who were tortured into confessing to crimes they clearly did not commit, not a word of condemnation was uttered by the Trump administration, signalling to Egypt and other rulers in the region that grotesque and public human rights atrocities are no longer an impediment to receiving US financing and arms.

Then there’s Bahrain, home to the US Navy’s Fifth Fleet, which held a sham election in late 2018 - one described by Bahraini activists as a “farce”, with opposition parties excluded from participating and an opposition leader sentenced to life in prison. Again, the Trump White House greeted this with total silence.

Essentially, the US today is the opposite of what it was when President George W Bush took office in 2001. Under him and then Obama, pro-democracy and human rights activists in the region were viewed as natural allies - but today, under Trump, they are viewed the same way repressive Arab regimes see them: as terrorists who should be exterminated using methods easily and cynically concealed behind the curtain that is the “war on terror”. A most tumultuous year: How Trump shook up Middle East policy
Read More »

“According to France-backed LNA General [Khalifa] Haftar, I am a terrorist because I want freedom and democracy,” Ahmed Sewehli, co-founder of the Misrata Psychiatry Department in Libya, told MEE, succinctly narrating the way in which militias that contain violent jihadists are now preferred by Western powers to pro-democratic reformers.

When Arab rulers watch Trump scorn democratically elected leaders in Europe and elsewhere, while praising authoritarian despots such as North Korea’s Kim Jong-un, Russia’s Vladimir Putin and the Philippines’ Rodrigo Duterte, their die is cast to mimic the world’s most repressive regimes.

Added to this are the lessons repressive Gulf regimes drew from the Arab Spring and the survival of the Assad government: to imprison, torture, shoot and kill anyone who dares to publicly criticise the regime, no matter how trivial.

While Arab regimes responded to the Arab Spring protests with “initial benevolence towards demands deemed legitimate”, such as calls for modest economic reforms, they now respond with “exclusive-repressive policies”, including the denial of public space, smearing and defaming protesters, and xenophobic policies that cast potentially threatening minorities as the unwanted other.

If history is a guide, this will augur badly for both the US and its Arab partners

To that end, social media - often credited for mobilising the 2011 mass protests across the region - has been subjected to draconian, and almost dystopian, levels of government surveillance, fuelled by regime insecurity and paranoia.

Ultimately, Trump has signalled to his country’s Middle Eastern partners that they’re free to use whatever means they deem necessary to crush restive populations, including the deployment of state terrorism against religious and ethnic minorities.

If history is a guide, this will augur badly for both the US and its Arab partners.

Unfortunately, Trump has demonstrated he’s neither a student of history nor a reader, so this current US strategy in the Middle East promises to end badly for all. 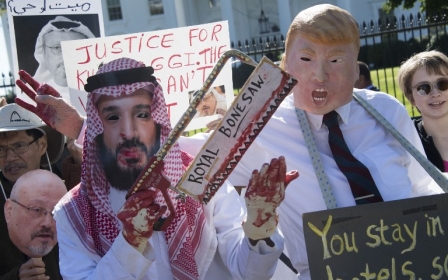