Amr Khalifa
There are millions of Americans who understand the 'evil' that Trump uses as a calling card. They will not take his fascist policies lying down 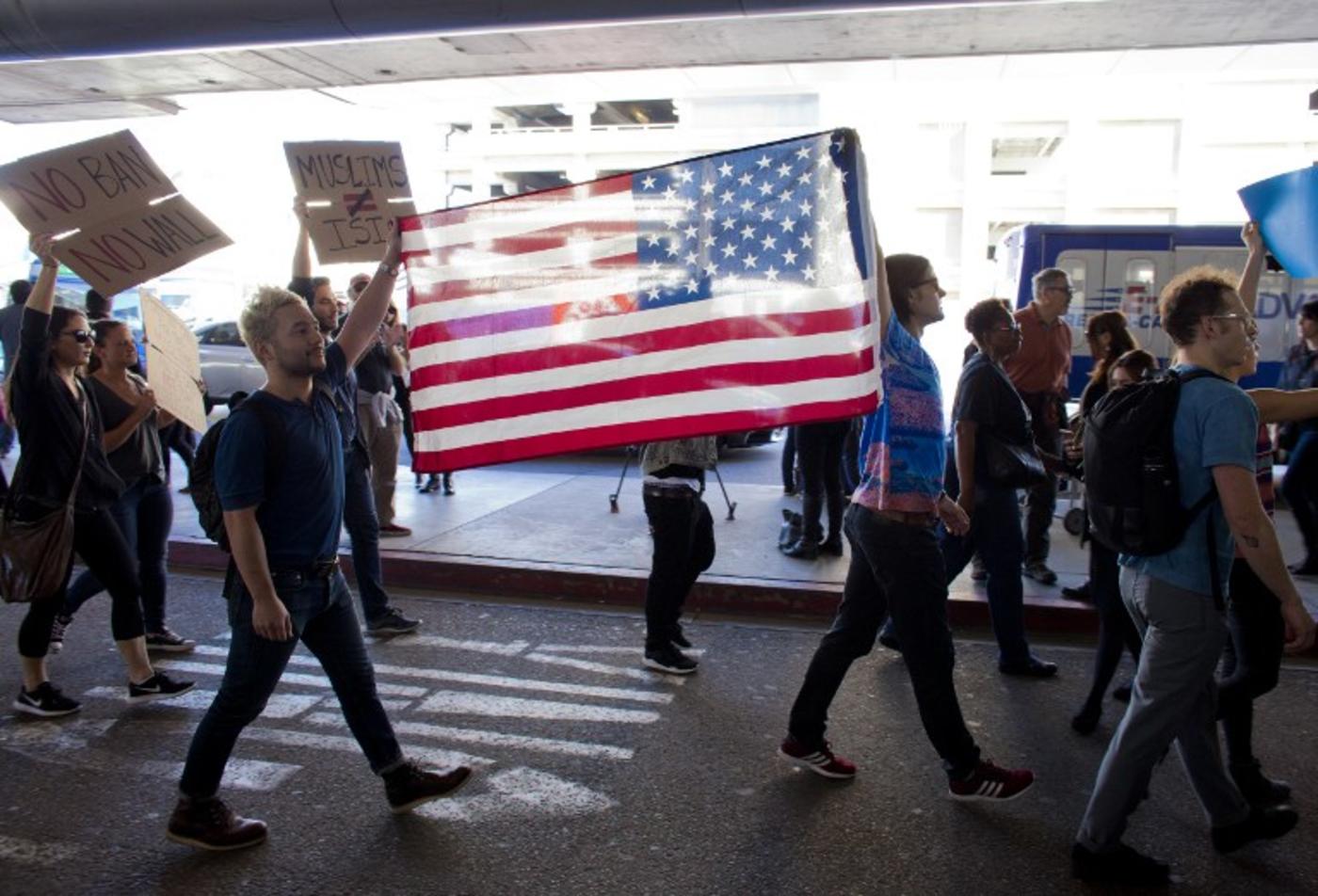 In 1978, a Muslim Egyptian boy boarded a Cairo plane bound for a snowy, frigid New York. His American "dream" was 7UP, hot dogs, cartoons, getting an education and also an important operation – although maybe not necessarily in that order.

Forty years later, with a slightly more nuanced dream in hand, the boy is now a journalist and the dream has become a nightmare, thanks to Donald Trump.

I fell in love with an America that was inclusive and welcoming and a rainbow of cultures and faiths that is New York, my home

A ban on Muslims hailing from seven predominantly Muslim nations - which the Trump administration insists is neither a ban, nor Muslim specific - has crystalised anti-Muslim fervour within the White House.

“What have Muslims done to him?” a cabbie declared as we sped off to the JFK International Airport to join more than 5,000 other New Yorkers in just one of the massive protests that erupted throughout the country soon after the order for the ban was signed.

“I wish he would come to my neighbourhood and we would let him know what we think of him and his ban.”

To generalise about any faith is ignorant; to take an instantly adversarial position against 1.6 billion Muslims worldwide is destructive to American interests. In short order, Trump’s anti-Muslim crusade has multiplied his opponents, both at home and abroad.

And with signature arrogance, he may yet trigger a constitutional crisis.

Trump could not care less - his focus is domestic. From day one, the opportunist in him has had an eye on re-election for another four-year term. Look no further than the sinister Steve Bannon, Trump’s chief strategist, the true driver behind this racist ban.

Now ensconced on the National Security Council, Bannon is a devotee of “Judeo-Christian values” who comprehends how the right-wing wave sweeping European capitals has given vent to America’s darkest urges.

Truth is, Bannon understands the strong strain of racism specific to America: he used it to get Trump elected.

With that same incendiary cynicism and with the signature moves of a bully, Bannon and co realised that one of Trump’s first acts had to be to go after the weak – in this case, the Muslims.

After all, weavers of tales of nations under threat have always sought to create monsters.

It was a highly visible move that would have played well with Trump’s white supremacist supporters, the same ones who declared last week that his new policies are “setting us free”.

Yet this designation of Muslims as resident evil in this ban is nothing short of “collective punishment…for tens of millions” hailing from the seven Muslim-majority nations on the ban list, explained national security and civil rights law expert Sahar Aziz.

While Trump watched Finding Dory, the ground at JFK on 28 January nearly shook with cries of 'No ban, No wall'

While Trump watched Finding Dory, the ground at JFK on 28 January nearly shook with cries of “No ban, No wall.” The American Civil Liberties Union (ACLU) heard the call for justice and led the legal charge, filing a lawsuit on behalf of two Iraqi men with valid US green cards who had been detained at the airport.

Less than 48 hours after Trump signed the ban, federal judge Ann M Donnelly ordered the first stay in response to the ACLU’s suit, blocking deportations of both the two men and anyone being held at airports across the US.

A bigger blow was delivered this past Friday, ironically enough, by a Bush appointee in Seattle, who decreed an immediate halt to the travel ban nationwide.

Two snippets of reality illustrate the size of the setback: less than a month into his administration, a poll by Public Policy Polling found that 40 percent of Americans want Trump impeached.

And in Trump’s own reaction – tweeting non-stop, the following day against the Seattle federal judge who stayed his immigration master plan - the loss is evident.

Yet again, this faceoff revealed a Trump temper so profound and an ego so easily injured, that both could be the biggest threats to American national security.

Decades after seeking refuge in the US, on that darkest of days when the towers fell in 2001, I stood in a manager’s office at work watching in horror.

As the second tower collapsed, a colleague – who had been asking regularly after my then pregnant wife - turned from the TV and looked directly at me. “Fucking Muslims,” she said.

History was clear, as I was taught as a student at a prestigious French school in Cairo: the Islamic empire from the 8th to the 13th centuries had led the way in algebra, medicine, science, the arts and translation to name but a few of the numerous fields. I was, accordingly, proud of being both Muslim and Arab and very much still am.

On that day, in 2001, the personal and the historical were both forgotten and knee-jerk racism won the day. Yet even though the post 9/11 period harmed Muslims, or those who looked like Muslims, and uncovered an unseemly underbelly of prejudice, there is a still a majority of the country that understands that the nation is, to its core, a nation of immigrants.

No matter the occasional battle with racism. It does not belittle the courage of civil rights marchers, the anti-Vietnam demonstrations and the very constitution that has protected my religious freedom and that of millions of others. I fell in love with an America that was inclusive, welcoming and called the rainbow of cultures and faiths that is New York, my home.

Make no mistake about it: Trump has now come to destroy the beauty that is America, through a unique combination of willful ignorance, racism and inexperience

Make no mistake about it: Trump has now come to destroy the beauty that is America, through a unique combination of wilful ignorance, racism and inexperience.

Resisting the Trump train begins by shining light on its very nature. Take a look at the nearly old, all-white group of men that is his administration and you will see the epitome of the “Ol’ Boys Club”.

Trace the political roots of men such as his vice president Mike Pence, Bannon and Michael Flynn, a senior advisor who is an open Islamophobe, and you will see leading members of the crusade. They do not hide prejudice. They celebrate it.

To paint the second-largest religion in the world with a terrorist brush stroke is not only hateful, ignorant and racist, but globally destabilising and a kiss of life for the Islamic State and al-Qaeda.

The vast majority of Muslim and Arab leaders in the Middle East are dictatorial and cowardly. Not surprisingly, they are, accordingly, silent on the ban – or even supportive - with a natural predilection to become Trump’s bosom buddies.

But in capitals throughout the world, the question now is who is next after the Muslims? Another may very well be: how can we trust such an unstable man who has the wrong kind of friends and makes enemies with ease - even with close friends like Australia?

The America I know is the cop who stood six inches away from me at JFK and smiled when I explained the teenager protesting next to me was my daughter. His response was: 'Respect'

Once prejudice is normalised, its spread to other races and faiths is guaranteed. The new normal includes “Jews belong in the oven” being scribbled in a NY subway car. If you can hate one, you can hate many.

Trump’s most trusted aide, Bannon, says: “I am a Leninist…Lenin wanted to destroy the state and that’s my goal too.” But there are millions who see and millions more who understand the 'evil' that Trump uses as a calling card and they will not take the Muslim ban, or similarly fascist policies, lying down.

The America I know is the cop who stood six inches away from me at the JFK demonstration last Saturday and smiled when I explained that the teenager next to me, protesting for her rights, was my daughter. His response was: “Respect.”